You are here: Home / Breeds / Andalusian Chicken: All You Need To Know About This Blue Hen 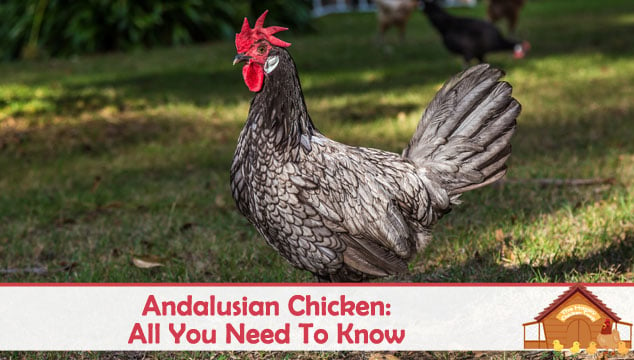 This blue feathered chicken comes from the Mediterranean area where it is still found today (although in very small numbers).

A rare beauty is a very apt description of this ancient breed.

It is a bird that enjoys its’ freedom and is very capable of surviving in adverse conditions.

In this article we discuss everything you need to know about the Andalusian Chicken. 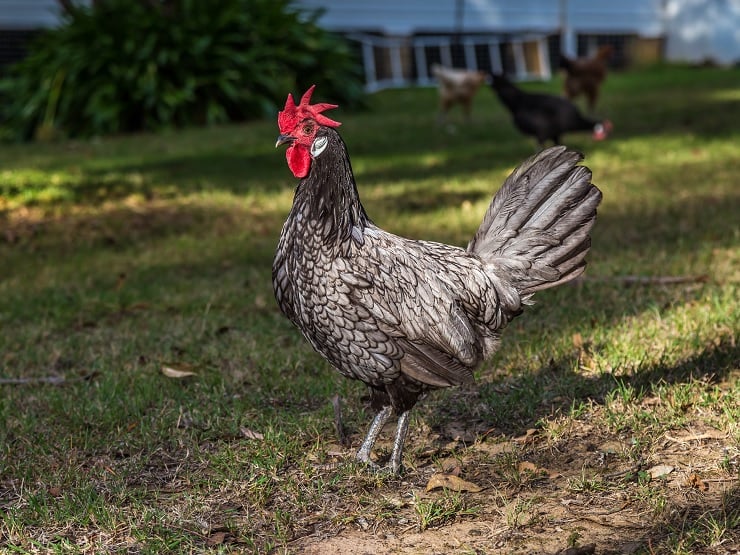 The true origins of this breed are unknown, but it is likely that the landrace chickens (known as Black Castilians) were bred together or with other local breeds of Castile, Spain, to create this particular breed.

The Andalusian was imported to England in the 1840s by Leonard Barber and was first exhibited at the Baker Street, London show in 1853. The originals were a paler, washed out blue than what we see today. It was the English who set about enhancing and improving the blue color.

They eventually made their way to the US sometime between 1850 and 1855; no one is really quite sure on the exact date. The American breeders then continued to improve the overall appearance of the breed. 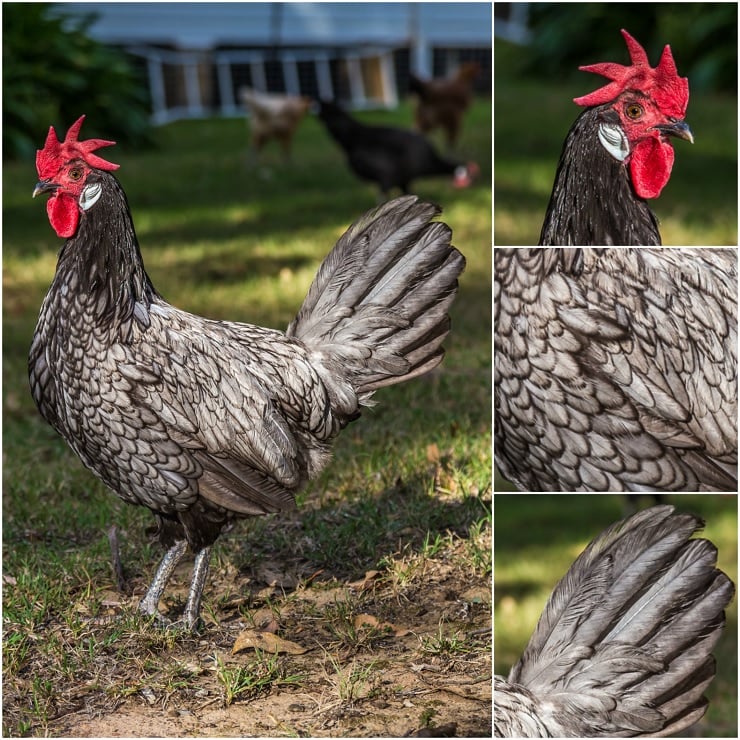 This is an elegant and graceful bird with an upright carriage and a confident aura. It is a light, smallish bird that is very active – roosters will weigh around 7lbs and the hen 5lbs.

There is also a bantam variety that was created in the 1880s and they weigh in at 28oz for the boys and 24oz for the girls.

The single comb is large and may flop to one side a little on the hens, the roosters comb should be upright and have 5 defined points to it. Wattles and comb should be bright red. The earlobes are white and oval in shape.

Eyes are a reddish bay color; beak is horn in color and has a slight downward curve.

Legs are clean of feathers and also slate blue in color, there are 4 toes per foot.

The body of this bird is not as robust looking as say a Rhode Island Red or Orpington. The outline is much more in keeping with the Leghorn, which is a Mediterranean breed.

It is long bodied but slender in appearance.

Ideally the plumage should be slate blue with delicate black lacing, but in lots of birds the blue can be various hues and the lacing can be lost. The quality of the color and lacing will depend on the quality of the chicken’s lineage.

As a Mediterranean bird, they do not tolerate severe cold well, although it is said the hens will lay well through the winter months.

They tolerate heat better than the cold, but need shade to retreat to when it becomes too hot or humid.

The Andalusian was not accepted to the Poultry Club of Great Britain initially, but was accepted a few years later. It is classified as rare, soft feather and light.

It was accepted to the American Poultry Association in 1874 where it is classified as Mediterranean breed.

Bantam varieties was created in the 1880s and was accepted to the American Bantam Association shortly thereafter. The ABA classifies the Andalusian as single comb, clean leg.

The unusual thing about the standard is the fact that the only recognized variety is blue. The blue would not exist without the black, splash and white members of the breed due to the genetics, which we will discuss a bit later.

We have talked about the Andalusian blue gene before – it is what is known as a diluting gene. It is an incomplete dominant gene.

If neither of the parents have a diluting gene the chicks will be the color of the parents, or some combination thereof. Here is the table that sets it out for you: 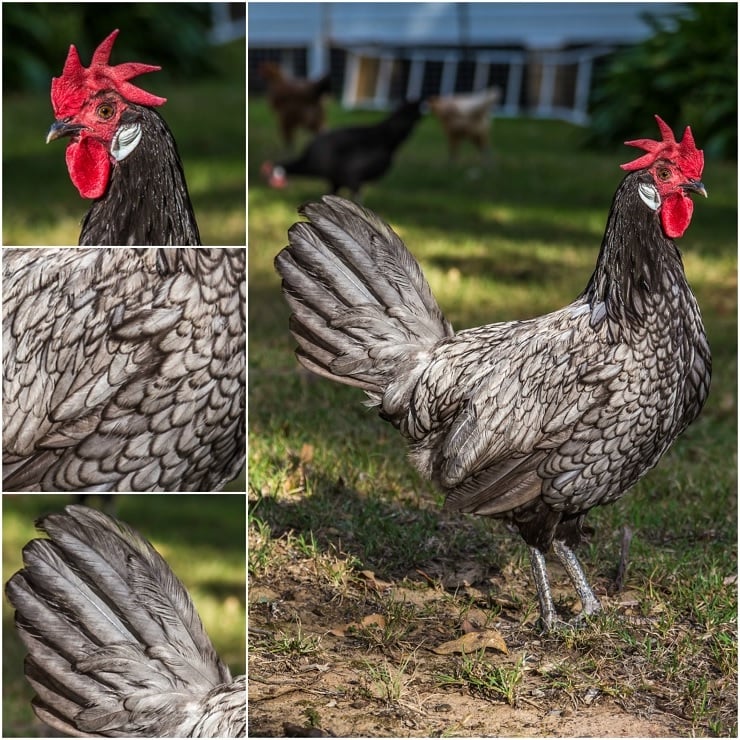 Andalusians is a good layer. You can expect 3 white, medium to large, eggs per week. This equates to roughly 150 eggs per year.

The really nice thing is that they are said to lay through winter too!

Andalusian hens have little interest in being a mother and rarely sit on their eggs, so you will have to provide your own incubator if you want chicks.

The chicks do feather out rapidly and are ready to lay earlier than many other breeds. You may even have the cockerels crowing at 7 weeks.

This bird is said to be friendly and curious towards humans, but by no means docile. They may come to you for treats, but they dislike being picked up. It is a bird that enjoys foraging and ranging outside of a pen. It is very rugged in comparison to most of our backyard hens.

It will not thrive in close confinement and usually resorts to feather picking under those circumstances. If confined they may also become very noisy, nervous and flighty.

They are known to be adventurous and will fly over most fences with ease.

The roosters have large combs so will be prime candidates for frostbite if you live in colder areas.

Occasionally the hens may get a touch of frostbite too, but certainly not as often as the boys – keep your jar of Vaseline on hand through the winter months.

Since they love to range it will be worth keeping a close eye on their feet and check regularly for signs of Bumblefoot.

Otherwise this breed is not known for any unusual complaints or problems. Treat regularly for internal and external parasites.

Is the Andalusian Chicken Right For You?

If you enjoy a hen that is independent and a bit of a challenge, this may be your bird! The Blue Andalusian is not a cuddly bird and doesn’t like to be held or picked up.

You need a lot of space to keep this bird happy – they love to free range and can happily fly up into trees to escape ground predators, they may even try to roost in trees.

These birds can get quite noisy too, so your neighbors should not be too close…

If you want a chicken that is in need of help with conservation and you enjoy the challenges of breeding, this could be an ideal bird. There are few breeders here in the US and even through the UK and Europe good breeders are hard to find.

When you find a good quality specimen of this chicken it really is stunning to behold. The blue laced with black on the feathers is exquisite. Needless to say, getting a bird to this level of perfection takes time and energy, but the results are always worth it.

The good specimen Blue Andalusians have been used to add some ‘pizazz’ to other blue breeds too – notably Breda fowl.

If you live in the colder areas of the country and want to keep these beauties, you may have to provide a little heat at night to keep the temperature reasonable.

Otherwise this is a low maintenance breed that prefers to keep humans at a distance for much of the time.

If you keep Andalusians we would love to hear from you! Let us know in the comments section below… 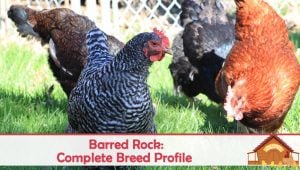 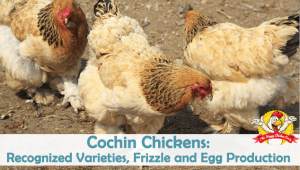