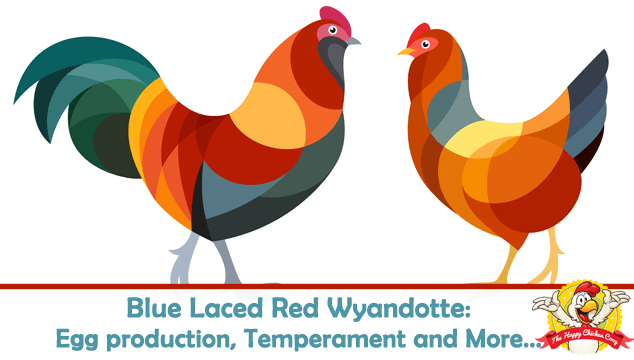 Although we recently did an article on the Wyandotte chicken, we have received a lot of enquiries about the Blue Laced Red Wyandotte.

The Blue Laced Red Wyandotte is perhaps the prettiest Wyandotte.

So here’s an article on this beautifully marked bird just for those who think it’s ‘the bomb’.

In this article we discuss the history of the Blue Laced Red Wyandotte, its disposition, egg laying ability and if it’s the right hen for your flock.

The original Wyandotte bird was created in the US in the late 1800s’. It was created to fill a niche in the market for a dual purpose hen that laid well and could be used for meat too.

The Wyandotte was originally bred from Brahmas, Silver Spangled Hamburgs and the ‘proto’ bird (the Mooney).

It’s also possible, that two other breeds (Breda fowl and Polish hens) were added to the mix.

The first of the Wyandotte breed was the Silver Laced – other varieties followed. The Wyandotte became very popular here in the US, also in England and across Europe too.

It suffered a severe decline in numbers starting in the 1940-50s’, when it was surpassed in egg and meat production by the ‘industrial’ hen. Recent interest in the breed has helped it to recover in popularity.

Many sources state the Blue Laced Red Wyandottes were created back in the late 1800s’ by a Mr Heidenbluth of Frankenburg, Saxony.

However, there appears to be a document in existence that disputes this, stating that the Blue Laced Red Wyandotte was created here in the US.

Reading through this document, it would suggest that in fact much of the stock of Blue Laced Red Wyandottes originated in the US and were shipped to the UK where they became very successful.

It isn’t a giant leap to suppose that some of the stock imported into the UK was sent to Germany where further breeding and refinement of the bird continued.

Blue Laced Red Wyandottes became quite popular in Germany in the 1920’s and in 1929 over 100 birds were shown at the Poultry Show in Leipzig, Germany. It was admitted to the German Standard of Perfection in 1929.

Sometime after that the German stock was imported to England and finally made their way back to the US in the 1980s’ thanks to Lowell Barber.

At the current time, the Blue Laced Red Wyandotte is not a recognized variety of the Wyandotte family, although this is, I think, just a matter of time.

The standards are being worked on by a dedicated group of breeders and will be submitted to the APA in due course.

Since there is no set standard, folks can basically sell their inferior versions of a Blue Laced Red Wyandotte without being ‘dishonest’.

In general the body shape should conform to the standard laid down for all Wyandotte chickens.

It would seem that many birds that are being called Blue Laced Red Wyandottes are barely conforming to the physical attributes of a Wyandotte bird in general.

Wyandottes are broad backed birds with lots of curves to them and dense feathering.

The body is broad and deep with a gentle ’U’’ shape, supported by short, stout legs. The legs should be yellow in color, as should the beak.

Comb, wattles, face and earlobes should be red, and the comb should be a rose comb set close to the head.

Eyes are deep set and reddish bay in color.

Roosters should weigh in around 8 ½ pounds and hens at 6 ½ pounds, although they may look heavier, it’s all feathers!

Do remember studying genetics at school? I do….my eyes would glaze over and my mind went ‘walkabout’, so delving into the genetics of this bird has been enlightening for me – I hope the same goes for you too.

I’m going to do a very simplistic ‘breakdown’ of the components of the Blue Laced Red Wyandotte for ease of discussion.

Firstly, the ‘Red’ color needs to be a mahogany red – no other red is acceptable for the base coating. Red is a dominant color gene.

If you add red enhancing genes to the pheomelanine, you will get the deeper mahogany of Rhode Island Reds which is the required base coat for the Blue Laced Red Wyandotte.

Lacing is the narrow contrasting band along the edge of the feather.

Lacing comes from the genetic makeup of the bird. Generations of breeders have worked hard to get the lacing perfect. Even so, following a molt, the lacing can be ‘smudged’ on a few feathers – this is usually caused by environmental factors such as sudden temperature changes.

For an in depth look at the genetics of lacing, look here.

Now for the interesting piece – how to get Blue Lacing!

The second blue is Andalusian blue – a diluting gene, which is an incomplete dominant. You only need one copy of the Andalusian Blue to make blue. If you breed a diluting blue to say a black bird you will get 50% blue and 50% black – blue will not breed true even if you breed blue to blue – blue x blue = 50% blue, 25% black and 25% splash.

At this point it should be noted that ‘blue’ is actually gray/blue and can come in three shades:

As you can see, putting this all together in one chicken is challenging. Breeding for body and color perfection is time consuming and exacting, this is why the birds are a little expensive.

When everything aligns correctly you end up with a beautiful Blue Laced Red Wyandotte.

Wyandottes are a friendly and gentle breed, although not an overly ‘cuddly’ bird – a good addition to any backyard flock.

Usually fairly high in the pecking order, they don’t put up with any nonsense from other hens and do not appear to be bullies to others. They make good mothers and can be prone to broodiness; they will usually accept any eggs placed under them for hatching. A very useful trait if you want to raise your own birds.

They tolerate confinement well, but if allowed to roam they are good foragers.

In terms of egg production, you should expect around 200 eggs/year of medium to large brown eggs.

The Wyandotte chicken in general can suffer from a low fertility rate. This is apparently linked to the rosecomb gene – hence the scarcity of good quality stock.

Otherwise the Wyandotte is no more prone to problems than any other hen. The dense feathering needs to be checked regularly for lice or mite infestations and treated accordingly.

Occasionally the fluff around the rear end can get a bit ‘poopy’ and may need an occasional trim. It may also need trimming to facilitate mating – all that fluff tends to get in the way of things!

Is It The Right Hen For You?

Now that you have decided you need some Blue Laced Red Wyandottes in your flock, be prepared for ‘sticker shock’ – a good quality chick will set you back somewhere in the region of $30.00 to $40.00 per bird!

Although you can get them much cheaper at several hatcheries and private breeders, in some cases the purity and quality of the strain has been compromised by sloppy breeding in a rush to produce numerous chicks and generate income.

It really is a case of you get what you pay for.

They are a real head turner if you are into exhibiting your birds, but as previously noted they are not yet an accepted variety of the Wyandotte breed. As more folks exhibit the breed it will become more noticed by the APA and perhaps expedite their acceptance.

Like most Wyandottes, the Blue Laced Red will do well in a 4H setting, being of a calm and steady demeanor and tolerant of a wide range of situations.

Being docile and non-aggressive, they are good with children and they certainly would make a colorful addition to the family flock.

They shake off cold weather really well and are a favored breed in the upper Mid-West and North Eastern states. Although they will tolerate heat, they will need a shaded area to retreat to and lots of cool water of course.

Because of their aloofness, the Blue Laced Red Wyandotte is not the best free-range chicken. They do enjoy foraging and are quite good at it, but their lofty attitudes make them an easy target for birds of prey.

Like all varieties of Wyandottes, the Blue Laced Red Wyandotte is a hardy breed that does well in colder climates. Their dense feather assists them in combating cold temperatures and their short rose combs are snuggled up to their heads, making them fairly resistant to frostbite.

Dedicated breeders are working hard to push for recognition of this color variety, and the outlook for approval is quite good. This color is, in fact, one of the most highly sought after Wyandotte colors.

The Blue Laced Red Wyandotte is certainly an eye catching bird and would be a great addition to your own flock. They mix well with other breeds although don’t really socialize too much preferring the company of their own kind.

Blue Laced Red Wyandottes really are a case of ‘buyer beware’. If someone is offering you one of these hens for $10.00 – be cautious.

You need to check the overall body type for Wyandotte characteristics, if you can, ask to see the parent birds.

If you really don’t care that your hen conforms to the high standard that breeders are aiming for- then take your pick.

However if you plan to breed, choose your hen carefully. Coloration can be fixed over time, body posture and skeletal defects cannot.

Do you have these beauties in your flock already? They are certainly becoming more popular with many backyard enthusiasts who are looking for something different in their flock.

Let us know in the comments section below…

Read: Columbian Wyandotte Chicken – Everything You Need To Know 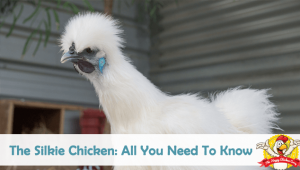 Silkie Chicken: All You Need To Know 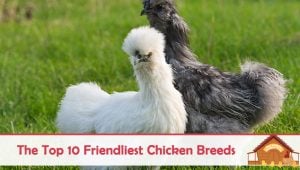