You are here: Home / Breeds / Buff Orpington All You Need To Know: Temperament and Egg Laying 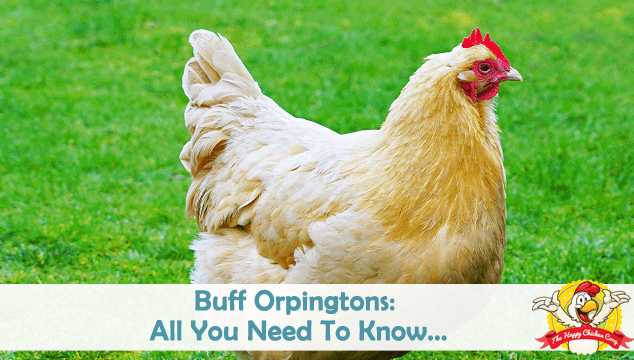 Is there another breed that more quintessentially says English barnyard hen than a Buff Orpington?

People almost always picture a plump, stately, beautifully feathered hen going about her business in the barnyard as if she owns the place and is most definitely not in a hurry!

As we shall see, the Orpington is a fairly recent breed created by the vision of a man who felt that it was possible to create a dual purpose bird that was bigger and better than existing breeds.

In this article we discuss Orpington’s temperament, breed characteristics, egg laying capabilities and recognized variants with a focus on the ever popular Buff Orpington.

The History of Orpingtons 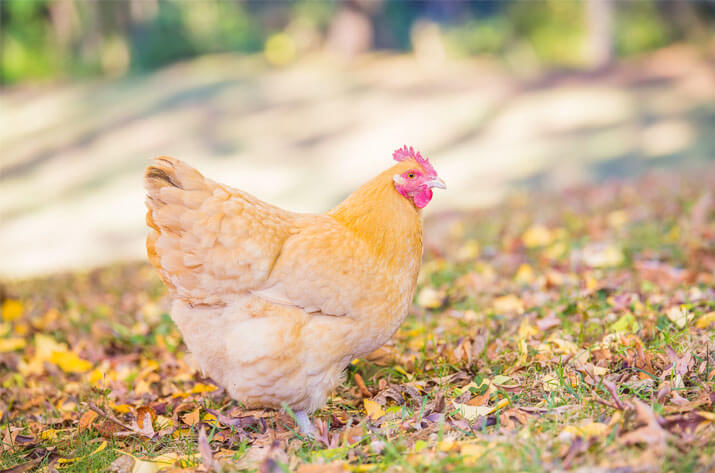 In the late 1880s ‘chicken fever’ in England was dying down.

People had turned from the novelty of breeding and keeping all sorts of exotic and strange birds for fun and curiosity, to breeding a more practical and useful bird.

One such person was William Cook – a coachman living in the town of Orpington in the county of Kent, England.

He didn’t start his interest in chickens until later in his life, but he was fascinated by the possibility of breeding a better fowl for both the table and egg production.

He began by selecting birds that were good layers and of suitable table size. The three breeds he originally used were Minorca, Langshan and Plymouth Rocks.

In 1886 he ‘unveiled’ the Black Orpington breed – which became an almost overnight success in England thanks to great publicity. It was bred to be black to hide the dirt and soot that was prevalent in cities at that time.

The next color to be revealed was the Buff which remains to date the most favorite color of Orpington chickens. Also following along there was the White and Blue and Splash colors of bird.

When Mr Cook revealed his birds to the general public he received rave reviews in the UK. It rapidly became the most popular breed in the land and within ten years was being exported to other countries, including the US. There was even an Orpington ranch in South Africa!

When Cook himself went to the US to sell his lines of birds he met great success. Apparently he was a great salesman and very quickly got farmers and poultry folks interested in his dual purpose breed.

Now, if you can cast your mind back to the beginning of this article, you will remember that the original black Orpington was created from the Langshan, barred Rock and Minorca.

None of those breeds have anything remotely ‘buff’ about them, So Mr Cook used gold spangled Hamburgs, Dorkings and buff Cochins to create the Buff Orpington. There is also speculation that an old breed known as the Lincolnshire buff was used, although this was refuted by Cook.

At the time this was extremely controversial and to this day is unusual to use several different breeds to create different color birds of the same name! If you think of the ‘Orpington’ as a brand rather than a breed, it makes more sense.

The buff was created to fulfill a need for a buff colored chicken at the time. It is a heritage chicken that has since become a favorite to many people.

They were the favorite breed of Queen Elizabeth The Queen Mother and her flock won several awards for their beauty and grace.

Until 2016 the Orpington breed was considered endangered.

Thanks to many backyard chicken keepers the breed has now been removed from the American Breed Livestock Conservancy list. Renewed interest in this favorite has seen the numbers of Orpingtons – particularly buffs rise steadily.

The appearance of the bird should be a heavy, broad body with a low stance, fluffed out feathers and a curvy, short back.

The bird should be well feathered with broad, smooth feathers. Feet and shanks should be clean and pinkish white in color and the flesh is white. The beak also is a pinkish white. Eyes are reddish bay color; wattles, comb and earlobes should be red.

The single comb should have five points – there is also a rose comb variety. 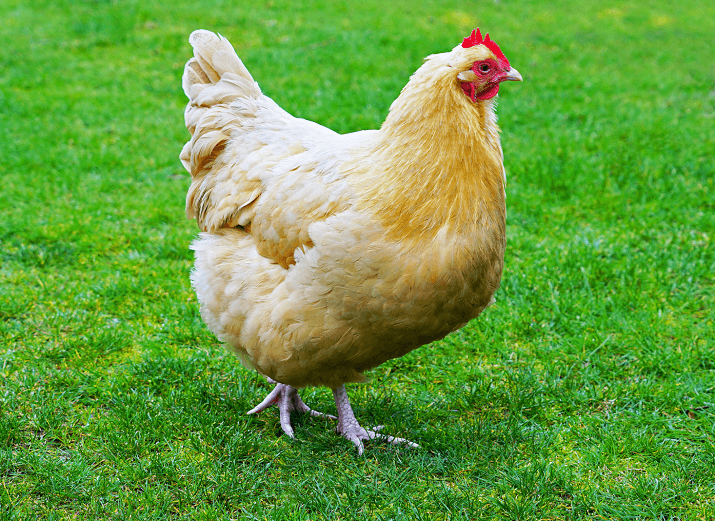 Large fowl should be around ten pounds for the male and eight pounds for the female. Bantams weigh in at 38 oz. male and 34 oz. female. In all other respects the bantam should reflect the large fowl. The bantam Orpington is one of the largest bantams available – if you can find them!

The American Poultry Association admitted the Orpington colors to its standard as follows:

UK standards are subtly different and state that the body should be deep and broad, curvy with a shortish tail. The plumage should be ‘close’ – not ‘fluffy’ like a Cochin or ‘tight’ like a Game Fowl.

All Orpingtons are said to be docile and friendly, but this is especially true of the buff.

They are very calm and stately – they sort of glide across the barnyard – unless they are running for treats, in which case they hike up their ‘skirts’ and run like crazy!

They love to be cuddled and will often seek you out to let you know they need attention.

Their fabulous feathering makes them very cold hardy, although if their feathers get sodden they can chill and die quickly. They tolerate warmer climates but need to have access to shade during the heat of the day.

They make great broodies and good mothers, they will usually accept hatching eggs being placed under them. The buff roosters are said to be fiercely protective of their offspring and will even take a spell on the nest to give mom a break!

They are a top choice for many families because the buff is superb with children, tolerating all sorts of things that kids do.

However, do keep a watchful eye since they have a strong beak that can deliver a mighty peck if needed.

Being so laid back and friendly makes them a great project bird for the 4H clubs since they tolerate handling and confinement so well. These same qualities make for a great show bird also as they are not upset by frequent handling, strange environments and unusual noises.

They tolerate confinement very well and although they will free range they rarely forage relying mainly on the feeders.

They are reliable layers of large brown eggs around 200–280 per year. If you are raising them as a meat bird, they are table ready at around 22 weeks. They are often considered the perfect dual purpose chicken.

Is the Buff Orpington Right For You?

If you are looking for a big fluffy chicken that lays well, has a sweet disposition and tolerates small children, this may be your choice! 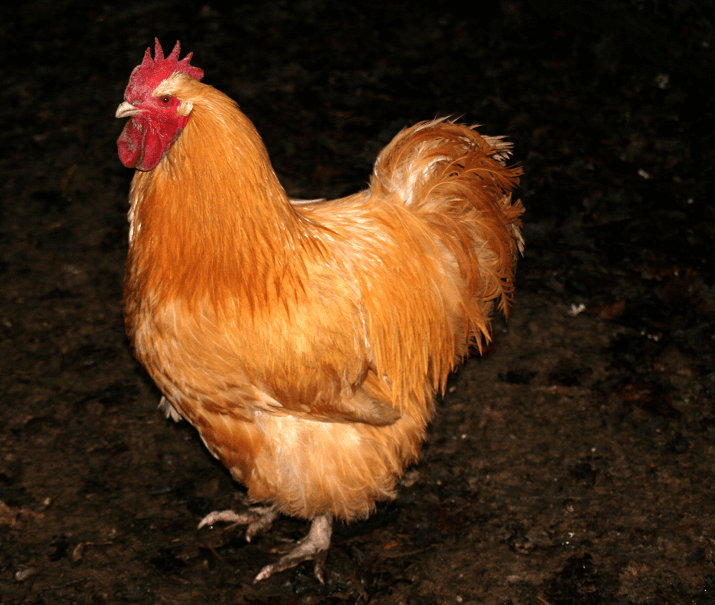 Their calm, docile and friendly nature lends them to a family oriented flock. They interact well with people and I don’t believe they have a mean bone in their body.

Because of their non-aggressive nature, they should not be put with more aggressive breeds such as Rhode Island Reds or Welsummers – they are likely to get picked on and be at the bottom of the pecking order.

If you are a town/city dweller, the buff is a very quiet bird, ideally suited for confinement in a smallish yard. They are a great bird for beginners as they are so easy to handle and are fairly low maintenance.

The only downside to this beauty is their tendency towards broodiness. However, if you wish to raise your own chicks, then the buff is a perfect fit for you! They are good mothers and care very well for the chicks.

High temperatures are not well tolerated, so shade, ventilation and lots of space should be provided for these large birds. Winter is a breeze for them with their extra fluffy feathers; they simply shake off the cold.

Because their feathers are so dense they should be checked regularly for lice and mites and treated accordingly. Many folks treat them with poultry dust regularly because it’s hard to spot little creepy crawlies amongst all those feathers.

As they are such large birds, they have a tendency towards laziness and they should be allowed to exercise as much as is possible.

They can be heavy feeders with a tendency towards obesity – this needs to be monitored for the health of the bird.

The Buff Orpington enjoys its time at the feeder, but it is not a lazy forager. As a middle-of-the-road free-range bird, the Orpington will do a decent job of seeking out what she needs in the barnyard. With that being said, she loves hand-outs and if you happen to be spending time on the porch, or having a picnic, she’ll crash the party and expect her own plate.

The Orpington is a difficult bird for predators to kill due to their large size and underestimated feather density. This lovable breed is also a little aloof when it comes to predators, which could be why it enjoys hanging out by the feeders. But if you add a rooster to your free-range flock, your hens will have an extra pair of eyes watching out for them.

The Orpington breed changed the world of dual purpose chickens. Until they came along, the regular table hen was usually fairly scrawny and was not the best layer of eggs.

Of all the varieties of color available, the buff is the stand out favorite.

Perhaps this is because of the warm color of the feathers combined with a calm and friendly disposition. They aren’t noisy like some other breeds, nor are they pushy.

Despite controversy and family feuds, the Orpington has endured.

Declining numbers were halted and reversed by backyard chicken enthusiasts such as yourself. Now the breed (especially the buff) is enjoying a resurgence in popularity and proves that heritage birds most definitely have a place in everyone’s home and heart.

Do you own buffs? We would like to hear your stories of this gentle breed in the comments section below…

Read Chickens That Lay Blue Eggs (Up To 300 per Year!) 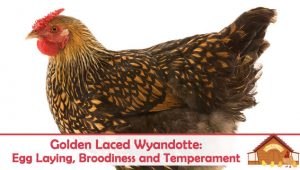 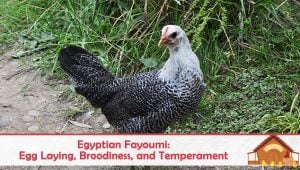