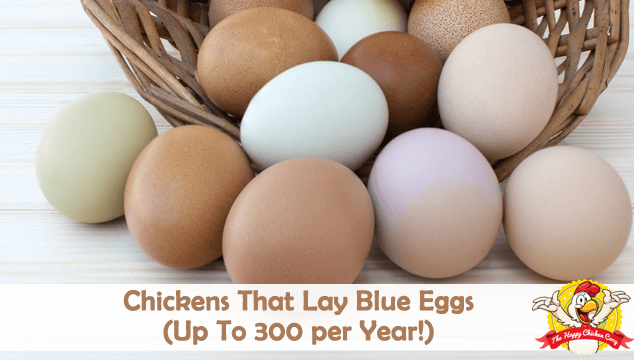 Chickens that lay blue eggs are few and far between.

As we shall see, the process of getting blue eggs is a bit more complex than getting a brown or white egg. It is a genetic trait and one that has become very popular over the last few years!

It seems that almost everyone enjoys a variety of color in the egg carton – brown, white, blue, green even pink!

In this article we are going to take a look at the top 8 breeds which lay blue eggs.

How Are Blue Eggs Formed?

What makes a blue egg so very different from any other egg?

It all begins in the reproductive tract.

All eggs are ‘born’ white. Some will stay white/cream or off white, up to the laying point because they have no pigment overlay.

Brown eggs start to become brown in the uterus. Brown eggs are made by the application of a dye onto the eggshell. The dye is called protoporphyrin and is made from the bloods’ hemoglobin.

The shade of brown is controlled by the genetic blueprint of the hen. Other factors can affect the dyeing process too, for example – if the egg goes slowly through the tract, it will have speckles.

The hen only makes a certain amount of dye for each egg, so an extra-large egg may appear paler than a regular sized egg. Or if there is a hiccup an egg can be partially colored leaving a two tone look, much as your printer ‘running out of ink!’

As you probably know, if you have to clean a brown egg the coloring will rub off leaving paler patches.

Blue eggs however are quite different.

The oocyanin (a liver pigment derived from biliverdin) starts to get laid into the calcium carbonate base of the shell at the beginning of the process. The color therefore becomes part of the egg and cannot be ‘rubbed off’. The blue color is carried all the way through the shell to the inside.

White and blue are the two ‘true’ egg colors. Brown, olive and green can all be removed from the shell since the pigments are laid over the shell.

Recent studies into the blue egg coloring suggest that it is caused by a retrovirus which altered the chicken DNA and caused blue eggs way back in history.

It is a harmless virus that gives us pretty blue eggs! 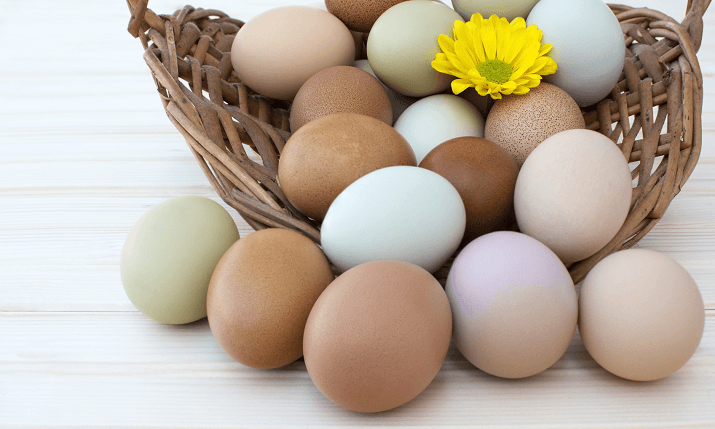 Breeds that lay blue eggs are few and far between.

For your convenience, we have produced a list of 8 breeds that lay blue eggs, some breeds lay more than 200 eggs a year!

Needless to say, almost all of the breeds mentioned here are expensive to buy – except the Easter Egger!

The Araucana is originally from South America – Chile to be exact. 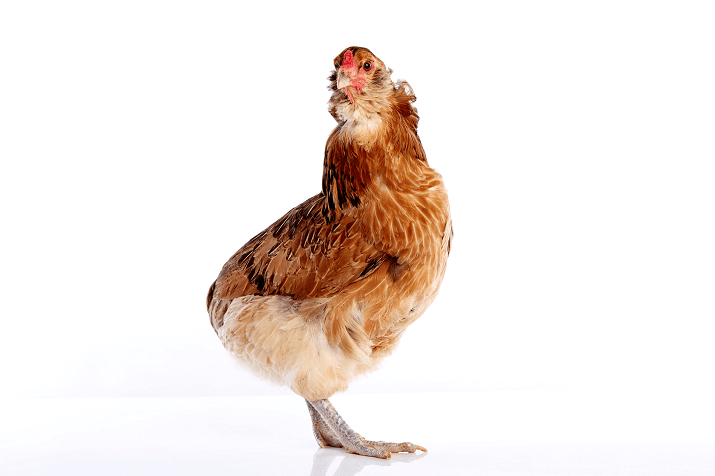 The Araucana is actually a combination of Colloncas and Quetros chickens of Chile – the first chicken inhabitants of the continent.

The Colloncas laid blue eggs and were rumpless – no tail feathers and no tailbone. The Quetros had tufted ears, pea comb, full tail and laid brown eggs.

These two breeds were bred together by Dr Ruben Bustos back in the 1880s’ and he created the Araucana as we know it today.

This breed is quite rare, partly because of the lethal tufting gene. If both parents have the gene for tufting, at least twenty five per cent of the chicks will die in the shell.

They can usually only be purchased from a breeder as much work goes into producing these unusual birds. They aren’t known to be friendly or ‘cuddly’ chickens, so really are not suitable for most backyard chicken keepers.

The Araucana comes in bantam and standard size fowl. As a breed it was admitted to the American Poultry Association in 1976.

The cream Legbar is a twentieth century creation. Two professors at Cambridge University in England were working with chicken genetics to try and create an auto-sexing chicken.

At the time these birds were created, blue eggs were not popular and the breed almost became extinct. The Legbar is a mix of Leghorn, barred Plymouth Rock and Araucana.

The Araucana blood is reflected in the crest and, of course the blue eggs.

The breed is still relatively rare, but becoming more popular with backyard enthusiasts. They are friendly birds, great foragers, quite muscular and very predator savvy.

The beloved Easter Egger is not in fact a recognized breed but a hybrid or ‘mutt’ chicken. Somewhere in its ancestry it had either Araucana or Ameraucana blood and so possesses the blue egg gene.

Although not all Easter Eggers will lay blue eggs.

Easter eggers may lay anything from pale pink through to a dark brown, olive, green or blue colored egg. It is also called the Rainbow layer because of the variety of egg colors possible, they can lay around 250 eggs per year – not too shabby!

It is said to be an excellent bird for a family flock, being friendly and docile, reacting well to small children.

It should have a pea comb and muffs. Feather coloring is widely variable from bird to bird – as is egg color.

These two varieties of chicken come from the provinces of China.

I have found scant information about them except that the Lushi chicken appears to lay either pink or blue eggs. Perhaps this is the Chinese equivalent of an Easter Egger.

The Lushi is a small bird, the cock weighing less than four pounds and the hen less than three pounds. They are a single comb breed.

The Dongxiang chicken is a fibromelanistic bird, meaning its’ skin, muscles and organs are black – much as the Ayam Cemani. They lay blue eggs only. As far as I know, no birds exist outside of China.

This breed was created by Dr Tom Whiting of Colorado. He had dual interests in mind – blue eggs and superb hackle feathers.

The hackle feathers on superior birds are used for fly tying and are exceptional in quality. The plumage of ‘true blues’ can vary from a ‘chipmunk’ pattern to easter egger variety.

The birds are said to be fast growing, good flyers, alert and active. They are also friendly and curious.

If you feel the need to add them to your flock, be prepared for a little ‘sticker shock’ – these beauties will cost you around twenty four dollars per bird.

You should expect upwards of 200 eggs per year.

An experimental breed possibly created by Dr R. Keith Bramwell at the University of Arkansas.

The bird is apparently a cross between an Araucana and a commercial strain of white Leghorn. An exceptional layer of around 250-350 eggs per year!

The appearance is close to a Sumatra hen, with clean face, pea comb and yellow skin and legs.

I owned two of these at one time. I found them flighty and not at all friendly to humans, needless to say they did not stay very long!

Prior to 1976, Araucana breeders had their own visions of what was the perfect Araucana. Some breeders cross bred with other breeds looking for the best of everything.

The American Araucana at that time could look very different from flock to flock. The purists bred for tufts and rumpless, yet others bred for tails and muffs.

The birds weigh in at around five and a half pounds for both sexes. They lay somewhere around 180-200 eggs per year. They have a mild, friendly disposition and are docile.

The true Ameraucana is still relatively rare. Many other birds (usually Easter Eggers) are sold by hatcheries under the name Americana (note spelling) or some similar sounding name, so it’s a case of buyer beware!

True Ameraucana chicks sell for around eighteen dollars each, so if you are offered Ameraucanas at two dollars each – be very cautious.

Mans’ tinkering with genetics will no doubt continue and perhaps we will see more blue egg layers in the future, who knows? Hopefully it will not be at the expense of the hen.

Many of the birds mentioned here are not particularly ‘human friendly’, possibly because they are relatively new breeds and retain much of the wild jungle fowl genetic pattern.

So, if you want blue eggs, be prepared to pay premium price for these birds.

My recommendations based on the research presented here would be the cream Legbar – they seem to be relatively friendly and would fit well with an existing flock.

Do you have blue egg layers? If so what breed and do you find them sociable? You know we love to hear from you… 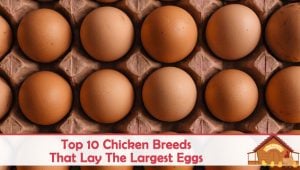 Why Don’t We Eat Turkey Eggs?