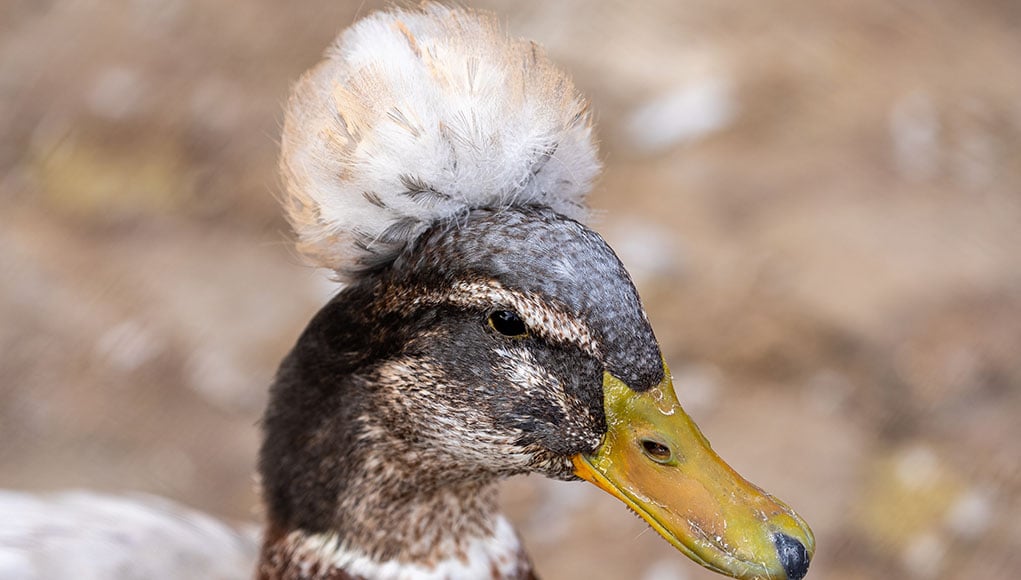 Crested ducks are a domestic breed with fairly unknown origins, even though their existence dates back more than 2,000 years. These regal looking poultry birds were traditionally kept for meat and eggs but are now largely kept as pets.

History of the Crested Ducks

Members of this breed are often believed to have found their way to Europe where they have been predominantly kept, but Dutch ships that have traveled the East Indies. This breed was possibly developed from a cross between crested runner ducks – or Bali ducks were bred with local ducks from the East Indies to develop what is now known as the crested duck breed.

Through distinctive selective breeding efforts this breed flourished during the 17th century. Dutch painters frequently depicted members of this breed of classic works of art. Two of the most prominent such painters were Melchior d’Hondecoeter (1636 -1695) and Marmaduke Craddock who lived from 1660 – 1717.

Although crested ducks can be found in a variety of colors, only the black and white versions of this duck breed meet the established standards in either America or England. The most common colors of crested ducks include: white, black, gray mallard coloring, as well as buff and blue.

A bantam (small – miniature) version of crested ducks was created by Roy Sutcliffe and John Hall in England that was recognized by breed associations in 1997.

What Is A Crested Duck?

The cresting on these ducks is also sometimes found in mallards, which nearly all duck breeds originated from, as a mutation. Through selective breeding for the trait, the crested duck breed was ultimately developed and standards set. The crest is a heterozygous for a mutation that is genetic and causes a skull deformity.

The dominant gene mutation causes a gap to grow in the duck embryo’s skull. In this gap a mass of fatty tissue emerges. On the fatty tissue feathers start to grow, creating either large and full or rather skinny crests that are less broad.

Muscovy ducks, also the originator of the bulk of modern domesticated duck breeds, cannot have cresting bred into them – they are the only known breed that cannot be crossed with a crested duck to create this unusual genetic deformity. 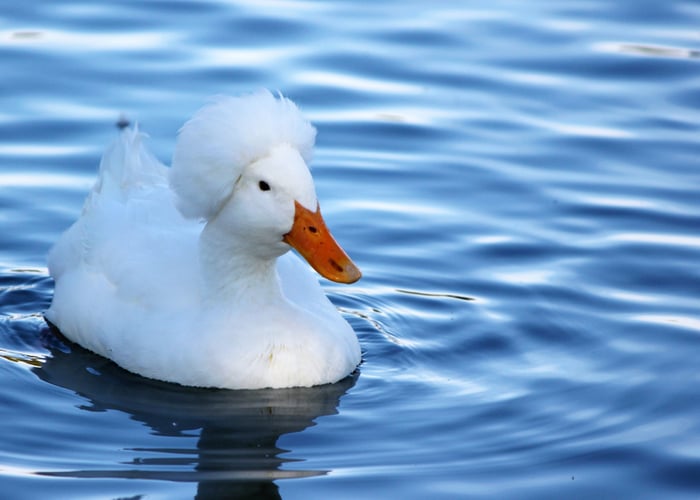 On average, crested ducks are mostly quiet – as far as ducks go. They are affable and calm once they become accustomed to their keepers and surroundings. It is this friendly demeanor that has enamored members of this breed to their keepers and caused them to become popular as pets and pond “ornaments.” Crested ducks are usually less clumsy on water than they are on land.

While crested ducks can be kept in a duck house or coop and run environment and be quite content as long as they have a baby pool of water to swim in, members of this breed are excellent free rangers. When allowed to free range outside of the confines of their habitat for even a few hours a day, crested ducks will avidly search for food both on land and on water. 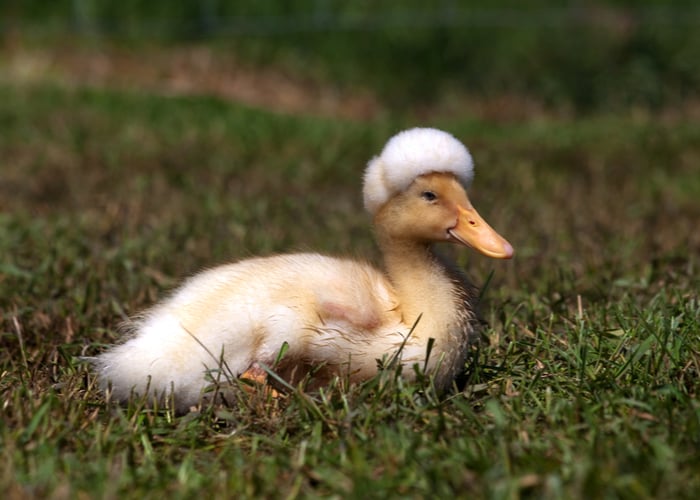 Continuing the crested breed can be problematic. Caution must be taken to prevent two crested ducks from mating because doing so causes a lethal allele combination in potential offspring. On average 25 percent of crested to crested duck embryos die in the shell before being fully formed. Of the offspring from two crested duck parents that hatch successfully, it is highly common for them to have frequent or severe health issues – a twisted neck being chief among them.

A crossing between two crested ducks also results in some of the ducklings not even being crested at all. Crested ducklings are not guaranteed when mating a crested duck with a non-crested duck, but you can be assured that the lethal allele combination will not result in sick ducklings or dead embryos inside of the shell.

The offspring of crested ducks are prone to fairly rapid growth, yet another reason they were once kept as a prime meat duck.

Crested duck hens are not very attentive mothers and also rarely go broody. To vastly increase the chances of a successful hatch of crested duck eggs, I highly recommend investing in an incubator with a self-turning arm mechanism.

Once a duckling hatches from the egg you will be easily and immediately able to determine wether or not it is crested. The ducklings are either born with a crest or without, this gene mutation is not something that develops over time.

The properly crossed ducklings will typically result in having only 25 percent of live hatches also possessing the crested gene mutation. The same gene that causes the genetic mutation also has a side effect of preventing about 25 percent of fertilized eggs from ever hatching. 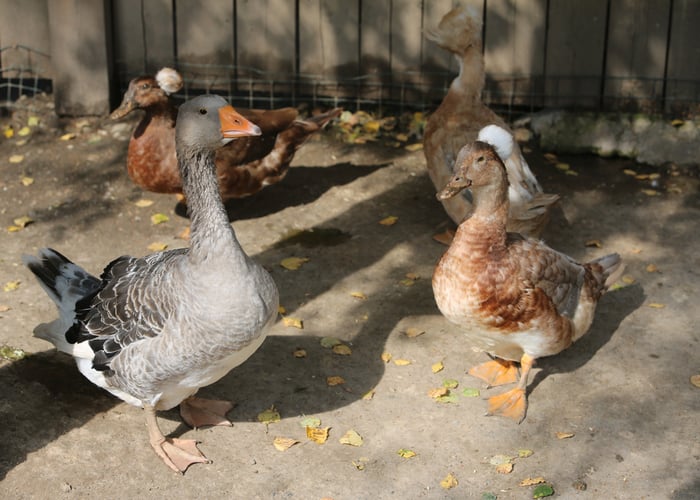 Crested ducks do not need any special type of husbandry that is not common to all domesticated duck breeds. They need a safe and clean place to live that protects them from both predators and the elements. Crested ducks are hardy in both hot and cold climates.

They live equally well in both constant captivity as well as when they are allowed to free range a little bit each day or live outside on the pond exclusively.

Putting this breed to work for you in the garden may substantially help prevent “bad bugs” from getting at your crops. Some of a crested duck’s favorite foraging treats are slugs, snails, and crickets. Because ducks are larger than chickens – from both a body size and beak – bill size, they are capable of eating more and larger bugs in your garden or yard. Ducks are largely less destructive when foraging, especially in a garden, then chickens – and crested ducks are not an exception to this general rule of thumb.

In spite of their lack of popularity as meat ducks, egg layers, or exhibition ducks in our modern world, crested ducks are still fairly common to find. The number of folks who keep crested ducks as pets keeps breeding working diligently to hatch ducklings and present them for sale. While it would be unusual to find crested ducks for sale at your local Tractor Supply or Rural King store during spring and fall chick and duckling sales, members of this breed are still readily available at commercial hatcheries. 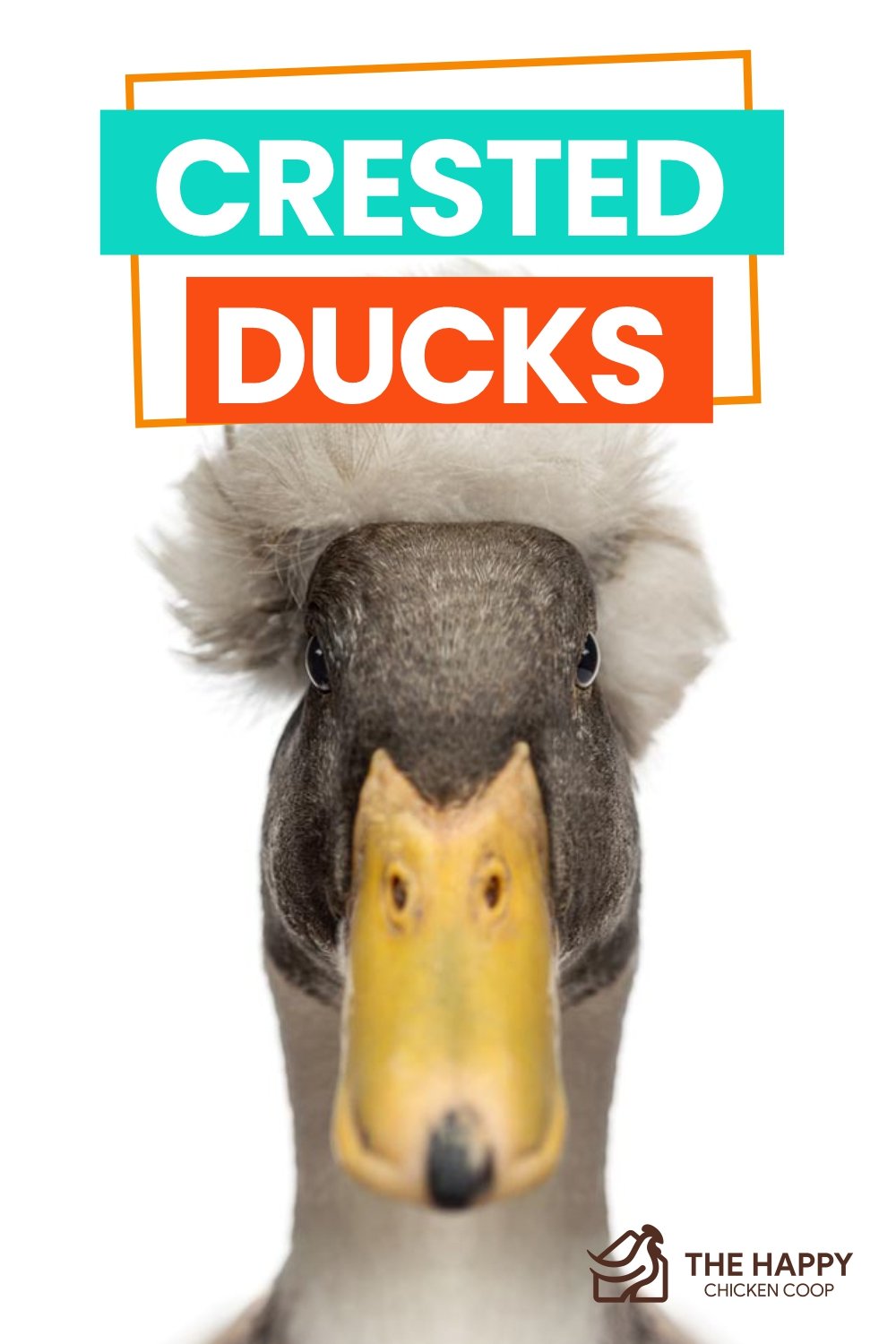