The Sebright chicken is a small but dynamic bird.

It enjoys an almost ‘cult’ following of dedicated breeders and keepers. This pint-sized bird is beautiful to look at and can easily fit in the palm of your hand!

It is a product of one man’s imagination and his quest to create something different in the poultry world.

The fact that it is named after its creator is a testament to the dedication he put into his vision. It took him over 20 years to create the Sebright bantam.

In this article we will discuss the history of the Sebright chicken, before discussing its temperament, egg laying, breeding and much more…

History and Background of Sebrights 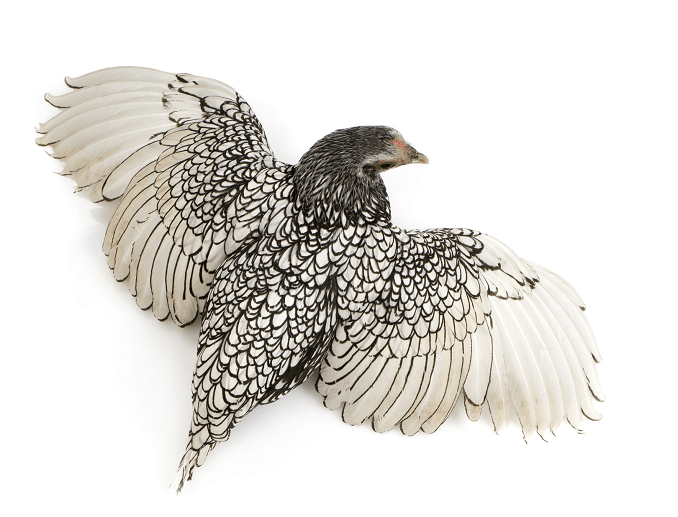 The little Sebright bantam is a bird with quite a history behind it! Some points in the history are still debated as to accuracy and likelihood of the accepted history.

The commonly accepted story goes something like this: Sir John Saunders Sebright 1767-1846, was the 7th Baronet of Besford, Worcestershire and a Member of Parliament for Herefordshire.

He was a ‘gentleman farmer’ and raised cattle, chickens and pigeons. He also wrote quite extensively on breeding and husbandry. His writings inspired Charles Darwin at the inception of ‘The Origin of Species’.

He wanted to create a bantam bird that had well defined lacing and in his quest to do so he brought together several different types and breeds of chicken, the exact ‘recipe’ for creating the Sebright bantam is unknown.

It was said that he travelled the country and collected ‘odd’ or ‘gamey’ specimens from the local poultry, he also had many different birds imported from other countries.

Apparently, the biggest obstacle was getting the bird to breed true with the desired lacing. He finally created his true bantam bird in 1810. He created the Sebright Bantam Club in the same year.

Membership to this club was quite exclusive, the ‘dues’ being 2 guineas per year, a small fortune to most folk except the landed gentry. 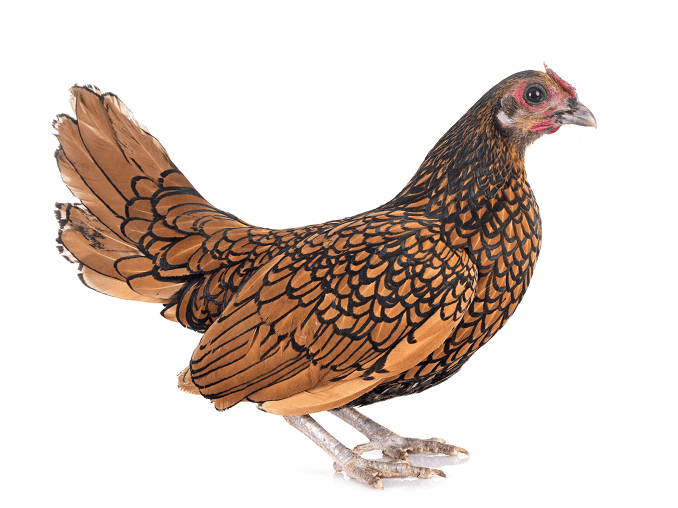 Very occasionally an odd color will be thrown making the bird a ‘sport’.

The lacing on the wings should be very noticeable, giving it a highlighted effect; it should be sharp and well defined. The feathers are short and tight. They should not be pointed, but rather an almond shape is desired.

They have a rose comb which should have a ‘leader’ that points slightly upwards. A leader is a point at the back of the comb. The desired comb color is mulberry, but a deep red is acceptable. Wattles, ear lobes and face should all be mulberry or deep red.

Their beak should be a dark horn color, in the silver laced bird it can be dark blue or horn. Eyes will be black and large.

The body is short and compact with a prominent chest; much like a pigeon chest. It has a short back and a square-ish tail that sits at about 70 degrees giving it an upright appearance, again much like a pigeon.

Wings are large and are downward angled almost touching the ground.

The legs are short, stockier in the male than the female. Each foot should have 4 toes. Legs and skin should be slate blue in color.

Breeders in Holland have managed to create other colors for the Sebright – white laced buff, blue laced buff, citron and a completely white bird with no lacing called an Eikenburger. These colors are not currently recognized as standards.

The Sebright was admitted to the Poultry Club of Great Britain ‘Standard’ in 1874 and also the American Poultry Association in the same year.

The standard has been modified over the years in one way or another, but the current standard can be found in the American Bantam Association handbook or the PCGB handbook.

The Sebright is classified as a soft feathered light breed by the Australian Poultry Society.

The Sebright has the distinction of being the oldest British true bantam, meaning there is no large fowl counterpart of the Sebright.

Despite a large and dedicated following, the Sebright is on the Rare Breed Survival Trust as a bird to be monitored and watched.

The Livestock Breed Conservancy here in the US lists the Sebright as a threatened breed, meaning there are less than 1,000 breeding birds known in the US.

Expected weights for this bird are 22oz for the males and 20oz for the females.

Sebrights’ are sociable and friendly little birds, talkative and non-aggressive although the males can be a bit protective of their hens.

They have been described as sprightly and active and very capable flyers. It is best to keep them in an aviary type pen for their own safety.

The Sebright has bags of personality and is always exploring its’ surroundings to satisfy its’ curiosity!

They can be very lovable little lap birds if handled gently right from the start, but as they are so active they don’t sit still for very long.

Despite their size the male Sebright can issue an ear piercing call at times which can leave your ears ringing!

The egg output from Sebright hens will not sustain you!

The average is 60-80 small, white/cream eggs per. Some keepers have had more eggs and some considerably less.

The particular strain of bird will affect the egg laying capacity since some strains have low fertility problems.

Sebrights are raised as purely ornamental or show birds.

The hens are very rarely broody and yet the best hatching ratios are obtained with a broody hen; so a surrogate mother may be the best solution.

This tiny little bird can come with some big health issues.

The hens rarely go broody so chicks would have to be raised under incubation or another broody if that is your goal. However, Sebright chicks have a very high mortality, so raising them can be frustrating and heartbreaking too.

Some males can be born infertile or with low fertility, whether or not this is related to ‘hen feathering’ is not known.

The males are ‘hen feathered’ this means they do not have hackle or sickle feathers to denote their sex.

Researchers are studying the Sebright males to try and determine exactly what the mutation in the sex hormones is.

The breed is especially susceptible to Mareks’ disease so will need to be vaccinated at source to mitigate the possibility of an outbreak.

These health issues keep the numbers of breed-able Sebrights’ low and combined with the difficulties associated in raising the chicks keeping the numbers up is an ongoing challenge.

Is The Sebright Right For You?

If you want a bantam chicken that is a small work of art, the Sebright may fit the bill for you. They have been described as ‘flighty’, but this seems to vary from line to line.

They are fairly hardy so don’t really require any special care except for being penned. They eat minimally so feed bills will be small. Since they have a fast metabolism, if you live in an area with severe winter weather, extra coop insulation would be beneficial.

If on the other hand, you want to breed them the Sebright is a challenging breed to raise and keep; it is not a ‘beginner breeder’ chicken at all.

You will need to be diligent in your homework to find a reputable breeder to sell you good quality stock for your own breeding program. The ABA is a great source of information for this.

They are small and dainty but fly extremely well, so really should be confined for their own safety.

The Sebright bantam is stunning to look at, almost too perfect to be true. This perfection of looks seems to come with the price of difficulty in continuance of the breed.

However, these gorgeous little birds are certainly very charming and noteworthy. Most folks always remark on the Sebright when they see one – a great conversation maker!

Like many bantams they are talkative and can be loud at times, but not excessively so. They do need some new folks to take an interest and start breeding programs – something that would be a labor of love and determination.

Do you keep Sebrights? We would love to hear from you in the comments section below… 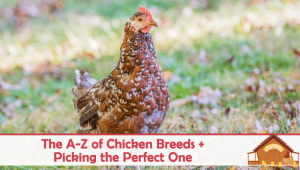 The A-Z of Chicken Breeds and Choosing the Perfect One