Blue Laced Gold Wyandotte Chicken: All You Need To Know 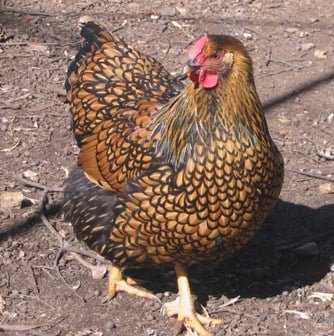 If you like how silver and golden laced wyandottes look and act, you’ll swoon over the stunning, rarer colored Blue-Laced Gold Wyandotte chicken. These gorgeous gals are similar to Golden Laced Wyandottes, but the black lacing has been “replaced” by shades of blue.

Let’s talk about these birds and see if they could be a match for your backyard flock.

This is a bit lighter than their relatives, the Golden Laced Wyandotte, which weighs six to eight and a half pounds when fully grown.

Hens produce about 200 to 240 medium-sized light brown to cream-colored eggs yearly. That roughly translates to three or four eggs every week per bird.

These chickens look similar to golden-laced wyandottes but with a little twist. The black “lace” has a stunning pale blue tint and the tail feathers are almost a solid shade of blue. The gold bay shade of the interior of the feather is perfectly clashed yet complemented by the blue-black lacing on the edge of the feathers.

These beautiful colors really pop and make this chicken a flashy addition to your flock.

So adding these birds to your coop is a pleasant addition right away, and then again after you choose to hatch more chicks out.

Hens have a distinct curvy-round plump shape that makes the bird look much heavier than their actual weight. This may be why they rank so well in the pecking order. They are usually near the top of the chain in most coops.

Their waddles are medium-sized, and the combs are modest-sized rose combs that overwinter well with little to no frostbite damage, even in extreme temperatures (so long as the chickens have a clean, dry, draft-free area to roost).

Most people keep them until age three or so when steady egg production ends; however, it is possible for them to live to be six to twelve years old before passing away of old age.

The Blue-Laced Red Wyandotte is a unique chicken breed with an interesting history.

Wyandottes were originally bred in the late 1800s.  This gorgeous dual-purpose bird was created by crossing Brahmas, Silver Spangled Hamburgs, and Mooney birds.

It’s also possible that two other breeds (Breda fowl and Polish hens) were introduced to further create the original version of these engaging chickens.

The goal was to create a dual-purpose bird, laying lots of eggs while putting on a considerable amount of muscle and fat while not consuming too much food.

They were initially named after a helpful indigenous Iroquois tribe, the Wendat people.

The Silver Laced Wyandottes were admitted to the American Poultry Association (APA) in 1883.  It was the very first dual-purpose chicken breed in America.

And in 1888, Joseph McKeen in Wisconsin successfully accepted the Golden Laced Wyandotte by the American Poultry Association.

You can read the Wyandotte Standard and Breed Book, which has been conveniently archived in this free library.

This variation chicken is believed to have been developed in New York, but other than that, details are very spotty and mostly unknown.

We know that Wyandottes in general first began as silver-laced, and then later the golden laced were developed. We also know that the first Wyandottes were a combination of leghorns, silver-spangled Hamburgs, and Dark Brahmas.

If you breed two Blue-Laced Gold Wyandotte chickens together, you’ll get the following:

The Breed Standard of the Blue-Laced Gold Wyandotte Chicken

Blue-Laced Wyandottes were the last of the Wyandottes to be accepted, and this happened in 1977.

There aren’t any set breed standards for the Blue-Laced Gold Wyandotte Chicken, yet. This is the APA’s accepted breeds and varieties page for you to peruse.

The Lacing of Wyandotte Chicken Feathers

Wyandotte chickens are prized for their exquisite lacing–an intricate weaving pattern around the edges of feather shafts.

To ensure a show-winning look, it’s important that this feathered edging remains even and uniform throughout without becoming too thick or thin.

Serious breeders want a distinct lacing effect that is even and clear, even from a distance. Perfectly crisp and clear laced edges are essential, creating an almond-like shape that’s neither too thick nor thin.

Blue-Laced Gold Wyandottes do not have as distinct “clean” lacing as silver or gold Wyandottes, but breeders are in the process of “cleaning” the pattern up, so it’s bolder and not as fuzzy in appearance.

Typical “Golden Laced” Wyandottes are actually “black-laced Gold Wyandottes”. The edges of the feather are black, while the interior is golden to a bay in color.

Blue-laced Gold Wyandottes share most of their personality traits with other Wyandottes. They are generally near the top or at the top of the pecking order in most coops. This is generally thought to be because of their wide bodies, heavyweight, and assertive personalities.

Around humans, they are tolerant, forgiving, and friendly. They like to be near humans, but they don’t enjoy being picked up or petted for more than a minute or two.

If you can think of Blue-Laced Gold Wyandottes like a housecat, you’ll have a good grasp on their overall personality. They are aloof, lightly talkative, and generally apathetic.

They know when you’re calling for their attention, but they’ll pretend to not hear you most of the time.

For the most part, they are quiet, meaning they work well for suburban settings.

Overall, they are good and patient birds that are sweet to even the littlest members of your family. Because of this, chicken keepers with toddlers or small children may choose to fill the backyard with sweet and tolerant Wyandotte chickens.

Not Ideal for Free-Ranging

You may be surprised to learn that all wyandottes are fantastic foragers; they love exploring their land, and will choose to forage over staying inside and eating at the feed bucket.

But they are so aloof; they just don’t pay attention to their surroundings. This makes them the perfect target for many predators, especially birds of prey, like eagles, hawks, owls, falcons, and others.

They are an ideal size for many of these raptors to swoop down and carry off to eat. They are heavy, so they make a filling meal, but they aren’t too heavy for the birds to fly away with.

Wyandottes are considered heat-tolerant, but they do significantly better in cold climates. They have a medium-sized waddle, a small to medium-sized rose comb, and small, partially-covered ears. Their feathers are thick; their body is broad, wide, heavy, and well-protected from the elements.

All of these attributes make them ideal for surviving cold weather, which they seem to do with ease.

Are Blue-Laced Gold Wyandottes Right for You?

If you’re looking for a gorgeous colorful bird that produces good meat, and a good number of eggs, likes people but isn’t overly friendly, can tolerate the cold well, stays relatively quiet, and can free-range or stay in a run, then the Blue-Laced Gold Wyandotte is the perfect choice for your backyard.

It’s not common to find Blue-Laced Gold Wyandottes in backyards or hatcheries, but they are catching on a little more every year. They are magnificent birds with gorgeous coloring and lace patterns on their body that add depth, interest, and a pop of color to any flock of chickens.

Not only are they beautiful, but they also make for strong dual-purpose birds that will offer you a lot of delicious meat and eggs.

This underrated chicken deserves so much more attention, and we can’t help but love them.