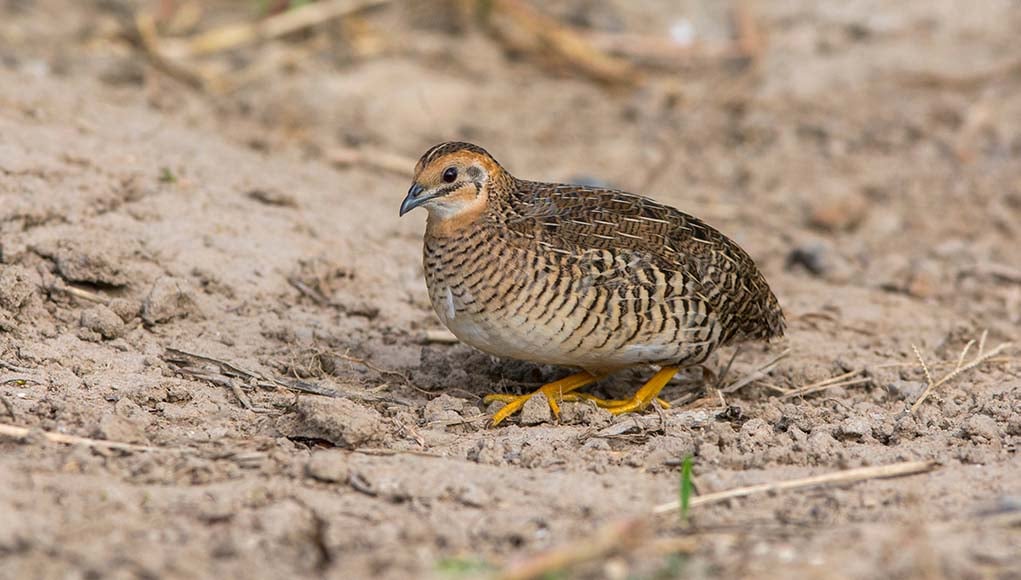 If you’re wondering if quail make good pets, the truth is, people have kept birds as pets for thousands of years, and quail are no exception. Quail are charming little game birds that can provide hours of entertainment with their comical antics and social chirps. And if raised from a chick, a pet quail can provide companionship to their human caretakers! So if you’ve been considering keeping quail as pets, this guide is for you!

The Best Quail Breeds to Keep as Pets

There are numerous breeds of quail in the world, but there are only three breeds that stand out from the rest as a pet. 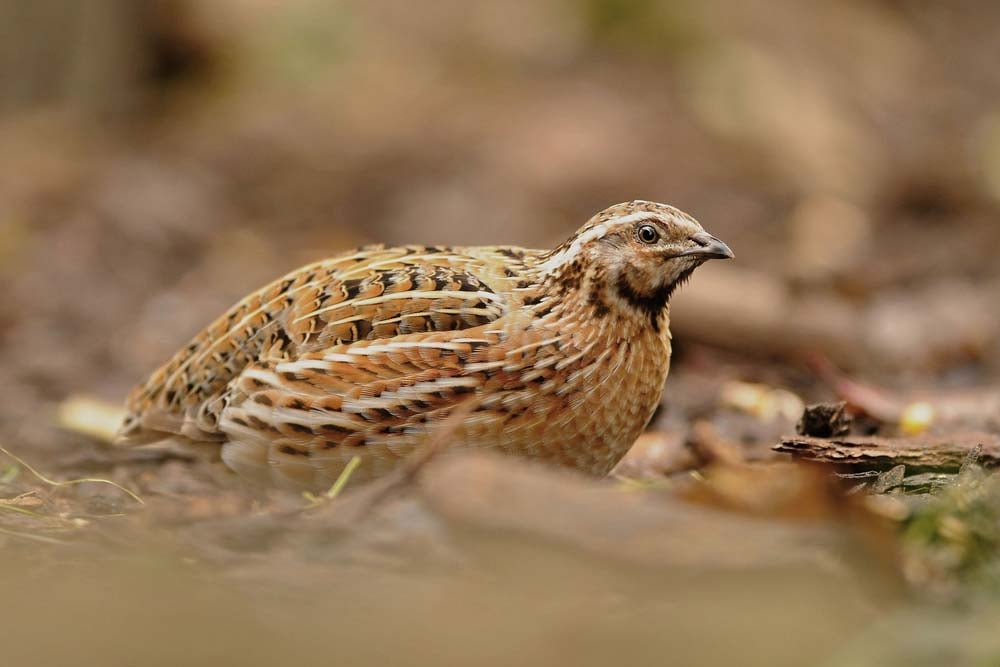 The Coturnix quail is a pleasant little breed of quail that many opt to keep for meat, eggs, and in some cases, as a pet. The Coturnix quail comes in standard size (which is considered small) and Jumbo size, which is mostly coveted for its rapid growth rate and meat. With that being said, the name “Jumbo” is simply a term for a large Coturnix quail.  If you’re looking for a triple-purpose quail, the Coturnix is the perfect choice due to its size, temperament, and egg-size. And while it may be the larger of the three breeds mentioned here, it’s still smaller than a chicken, for example. If a large-sized quail breed is important to you, you’ll be happy to know that a Coturnix quail can weigh anywhere from 3.5 ounces to 7 ounces at maturity. As you can see, they are still small birds, in general. 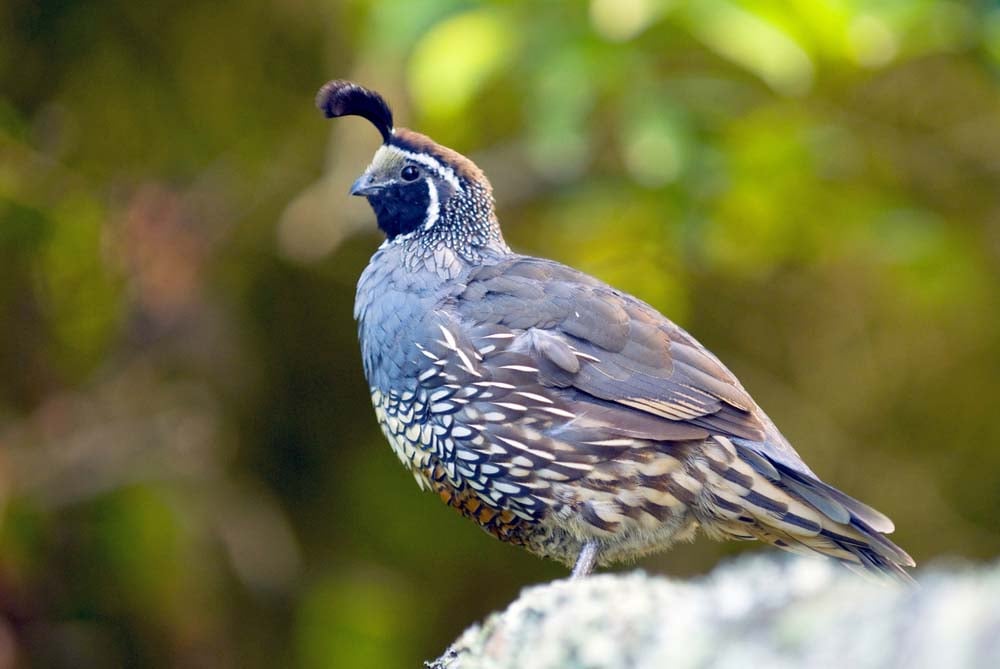 The Most Beautiful Quail Species

If you’re simply looking for an ornamental breed of quail for your aviary, you should consider the California Valley Quail. In contrast to the Coturnix’s dull brown plumage, the California Valley Quail is softly colored, with males sporting light bue striping. To top it off, both females and males adorn an adorable topknot feather on their crowns. Just because this breed is beautiful, doesn’t mean it can’t be a pet as well. There are always variances amongst breeds and individual birds.

If you’re looking for a bite-sized (pun unintended) version (let’s go with fun-sized) of quail to keep solely as a pet, then look no further than the affectionate Button Quail. While you can technically eat any bird or their eggs, you won’t find much yield of either from this tiny quail breed. The Button quail reaches maturity at a mere 4 inches long from head to tail. Moreover, the Button Quail only weighs approximately 2-5 ounces (usually on the smaller size) at maturity.

Where to Buy a Pet Quail

When you make the decision to purchase a quail as a pet you’ve got a few options, depending on the breed you’re most interested in.

A simple online search will reveal breeders, or small hatcheries, near you, that offer quail for sale for breeding, eating, or as pets. Many enthusiasts and dedicated breeders are comfortable shipping hatching eggs or chicks to you, so don’t limit yourself to the large hatcheries or even local breeders if you’re looking for something specific in your quail. The most common breeds you’ll come across with breeders are Cotrunix and Bobwhites. While the Coturnix can be friendly, the Bobwhite is considered to be a fairly aggressive breed of quail that is mainly used for meat and dog training. Joining social network groups for quail enthusiasts can help you find recommendations for quail breeders in your area. Additionally, attending local swap meats can help you network with local breeders…and pick up some tips and tricks from fellow fanciers. 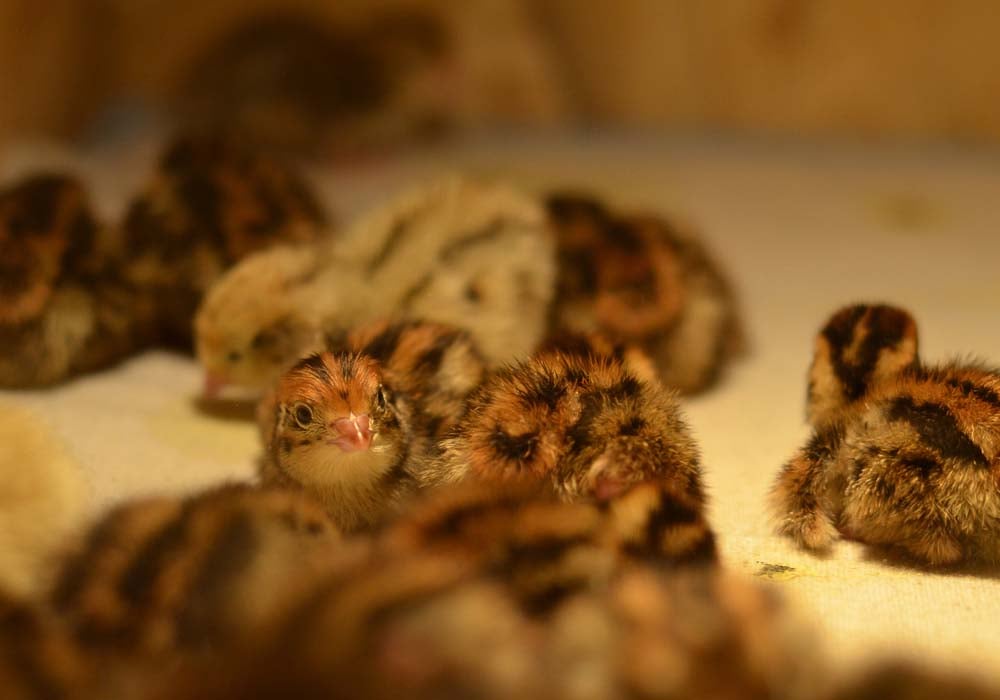 If you have a favorite hatchery, you can quickly pull up their website and search for the breed you’re looking for. Many hatcheries start by offering chickens but quickly expand into game birds and other types of fowl and poultry. When arriving on a hatchery website, seek out the section titled “Game Birds” to find their quail selection, if they have one. Since quail are very tiny, as chicks, hatcheries may have a minimum requirement for the number of chicks you order. This is to ensure there is enough in the shipping container to keep themselves warm with their own body heat until you can get them in their brooder.

Some pet stores are adding Button Quail to their inventory. Even larger chains, like Petsmart offer Button Quail in limited cities. When buying anything from a pet store, always do your research to find out where the animal was sourced from, how it was raised, and what it has been feed. This ensures you’re supporting humane raising practices and continuity of care for your pet quail. 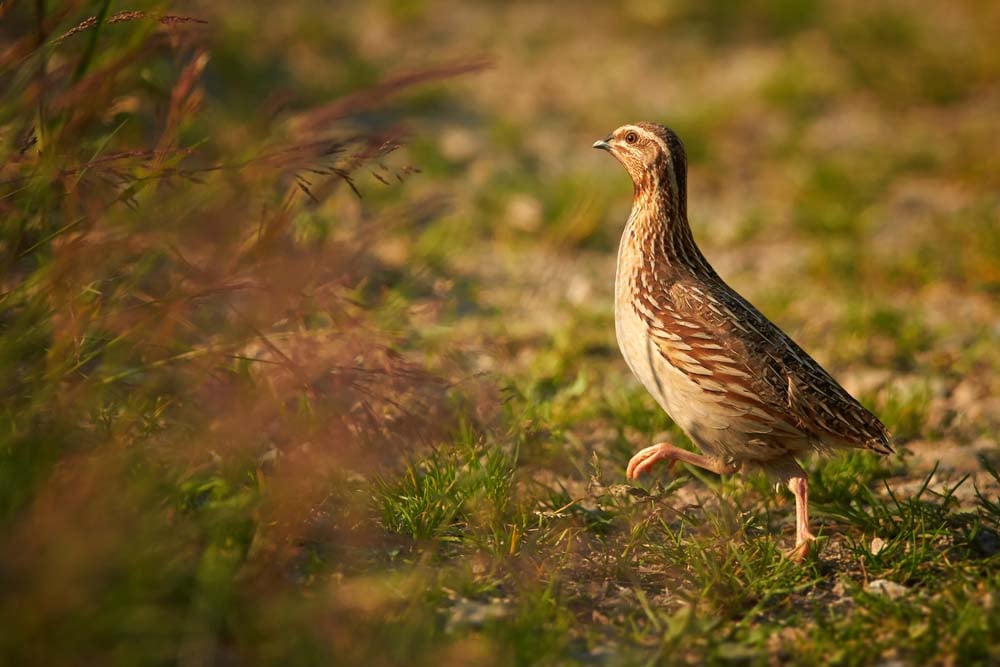 Things to Know About Quail As Pets

Quail will be unlike any other pet bird you’ve owned, and there are a few things to be aware of before you bring your quail home for the first time.

Quail aren’t long-distance flyers, but they can fly significantly better than a chicken, for example. Additionally, quail don’t need a running start to take flight. In fact, they can seemingly fly straight up into the air. And now that you know that quail fly, it goes without saying that they enjoy flapping their wings and taking flight from time to time. So, consider giving them a safe space outdoors to stretch out a bit.

While the eggs may be just a perk for you, be aware that, unlike some of the songbirds often kept as pets, a female quail can lay one egg daily, depending on the breed of quail you’ve chosen. With that being said, you’ll need a plan for all those eggs! And suffice it to say, it’s a good problem to have. You can eat them, as they are delicious and high in protein, sell them, or use them to compliment your dog’s daily meals, for example.

Quail Live Only A Few Years

On average, a quail only lives for about two to three years, which is significantly less than a pet cat or dog…or chicken, for that matter. But a short life doesn’t mean they’re not worth the time. As I always say, “might as well love ’em while they’re here.” You can get plenty of enjoyment and companionship out of a pet, even in the shortest amount of time. I’m making this point simply as a reminder that your quail will be with you for a short period of time, and if they pass within 3 years or so, it’s simply natural for them to do so. 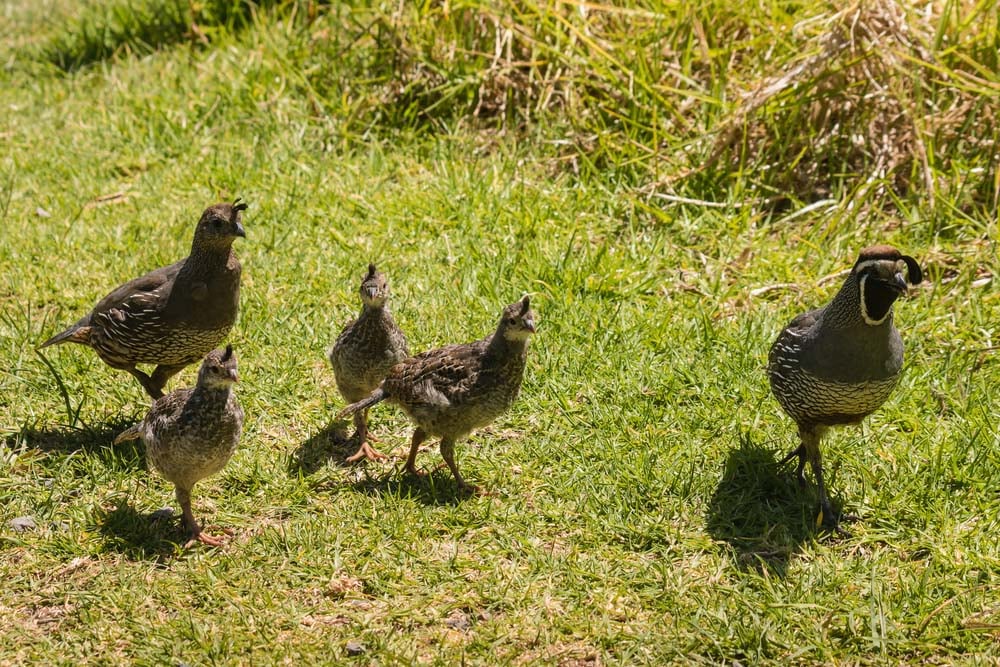 In the wild, quail tend to live in a covey (aka flock) just like chickens. Consider keeping more than one quail so they have company and someone to cozy up with at night. If you have an aviary with finches, for example, you could consider keeping your quail with these other songbirds. If you do, just make sure your quail has plenty of room to live on the floor of the aviary. Partnering quail with other birds is advantageous because the quail will eat some of the discarded, or wasted feed, from the other birds! With that being said, always offer feed intended for quail so their nutritional needs are always met.

If you plan to keep male quail, keep in mind that they crow. And while their “song” isn’t like a rooster’s crow, it’s still quite consistent (some may even consider it to be noisy). Quail keepers suggest keeping one male for every two females to make sure there are enough females for the roosters in the flock (which will prevent fighting and excessive crowing).

If you’ve ever free-ranged chickens at night, they typically come back to their coop, and quail can be trained to do so too. However, quail like to travel a little farther than chickens do, for example. In fact, a quail covey may decide to travel several miles from their home in search of forage. Furthermore, quail may find an alternative, more desirable, place to call home rather than returning to their coop. Free-ranging quail, meant as pets, is a risky scenario because they’re pretty low on the food chain and predators consider them a delectable meal. To keep your quail safe, consider keeping them in a run, tractor, or otherwise. 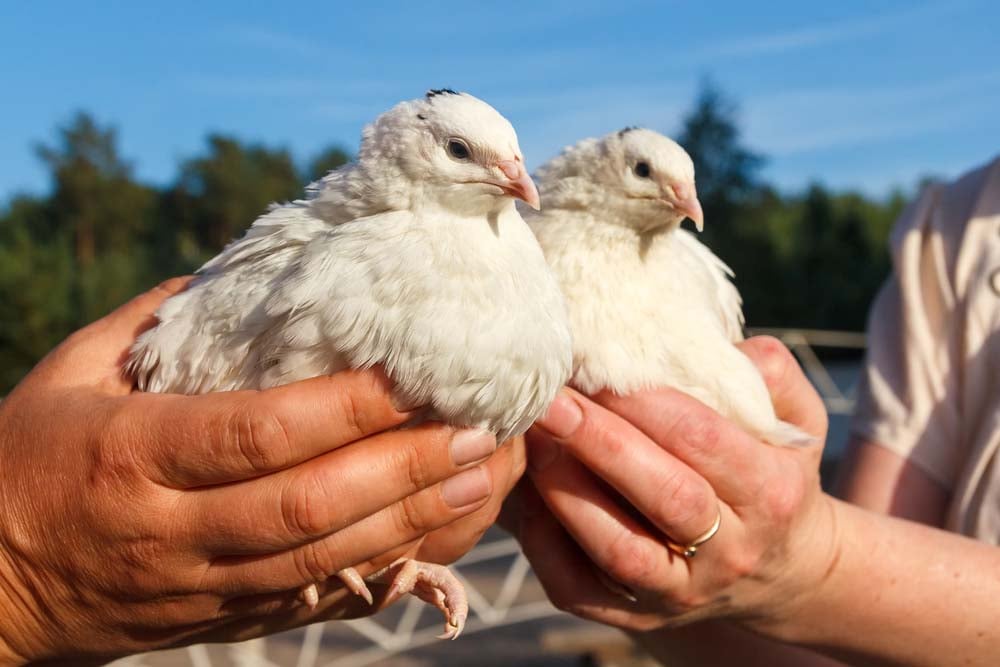 While quail haven’t been showcased as trainable trick-performing pets, there’s nothing saying they can’t be! The main thing to remember when you’re taking on a new pet with little training research available, is that it’s best to be patient, learn as much as you can about their natural behavior, and be forgiving. Some quail tolerate being held better than others, the key is to go slow and start when your quail are young. It’s much more challenging to catch and train an older quail than it is a chick. When you pick up your quail, remember to be very gentle as they are extremely small and fairly fragile. Cup your hands to hold it safely and provide comfort for the quail when you pick it up. When it comes to handling, treats work wonders to use as a reward for desired behavior…give it a shot!
Quail-Charming Tip: Quail don’t really care for petting, per se, but they don’t mind being pet under their chins.

How to Care for Pet Quail

A quail’s hutch or coop should be well-ventilated and offer plenty of space to move about. Many opt to convert a rabbit hutch into a coop for a small amount of quail. Alternatively, commercial coops can be purchased for operations that are meant to preserve eggs for human consumption. These hutches often feature a slanted tray to safely collect the eggs, and prevent the quail from trampling them. Runs should be 100% predator proof with complete enclosure and protection from predators that are expert diggers. Additionally, coops and runs should have a soft cover/roof to prevent startled quail from injuring themselves by flushing into a solid wall. Lastly, quail prefer to roost on the forest floor and if you provide a similar environment, they’ll be eternally grateful. Use pine shaving, branches, and other greenery to help your quail feel right at home. And always remember to clean your hutch or coop on a regular basis to prevent illness and parasites. 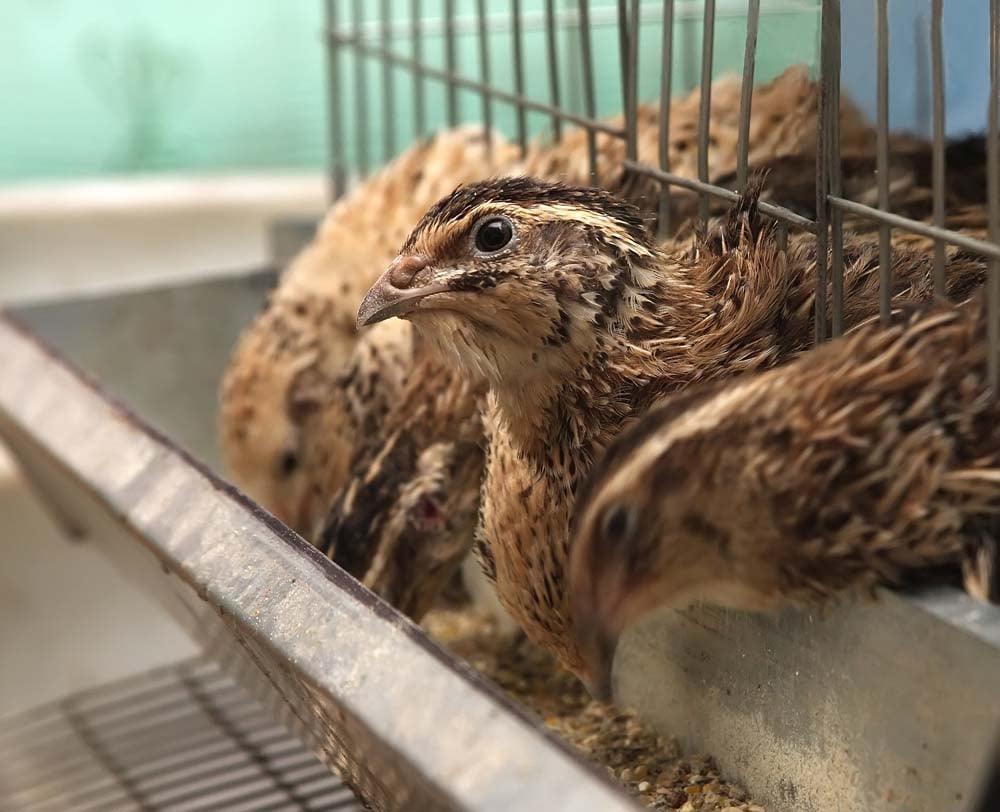 In the wild, quail prefer to eat seeds, grains, greens, and some bugs. If you have the capability of safely allowing your quail to spend time outdoors, they’ll forage for these things instinctively. On the other hand, if you plan to keep your quail completely confined, feed them game bird crumble to ensure they’re getting the vitamins, minerals, and protein needed for optimal health and happiness.
Feeding Tip: Quail are messy eaters by nature, not to mention picky. In fact, they prefer to eat feed that is all the same size. Be prepared to observe your quail sorting through, and wasting, pellets or crumble that isn’t to their specific liking. To prevent wasted feed, consider employing enclosed feeders…which will also cut down on the mess. Yes, quail tend to make a mess when they eat. They often shake their heads, like a dog with a toy, when eating and sorting through their feed. So, if you’re keeping pet quail indoors, consider using screening to cover the bottom half of your hutches, if they’re exposed, to prevent your walls and floor from becoming speckled with crumble.

Toys to Entertain Your Pet Quail

Quail are active birds, and they love to play with natural things like branches, shavings, rocks, and different grasses (to sort through, of course). They also like to make nests at the bottom of their cages as well as taking dust baths to control natural oils and external parasites. Quail can be extremely entertaining, and they’ve been known to show off with balls by chasing them around their cages for their human caretakers. All-in-all quail are easy-to-care-for, delightful, little birds that can also provide meat, eggs, and hours of entertainment. 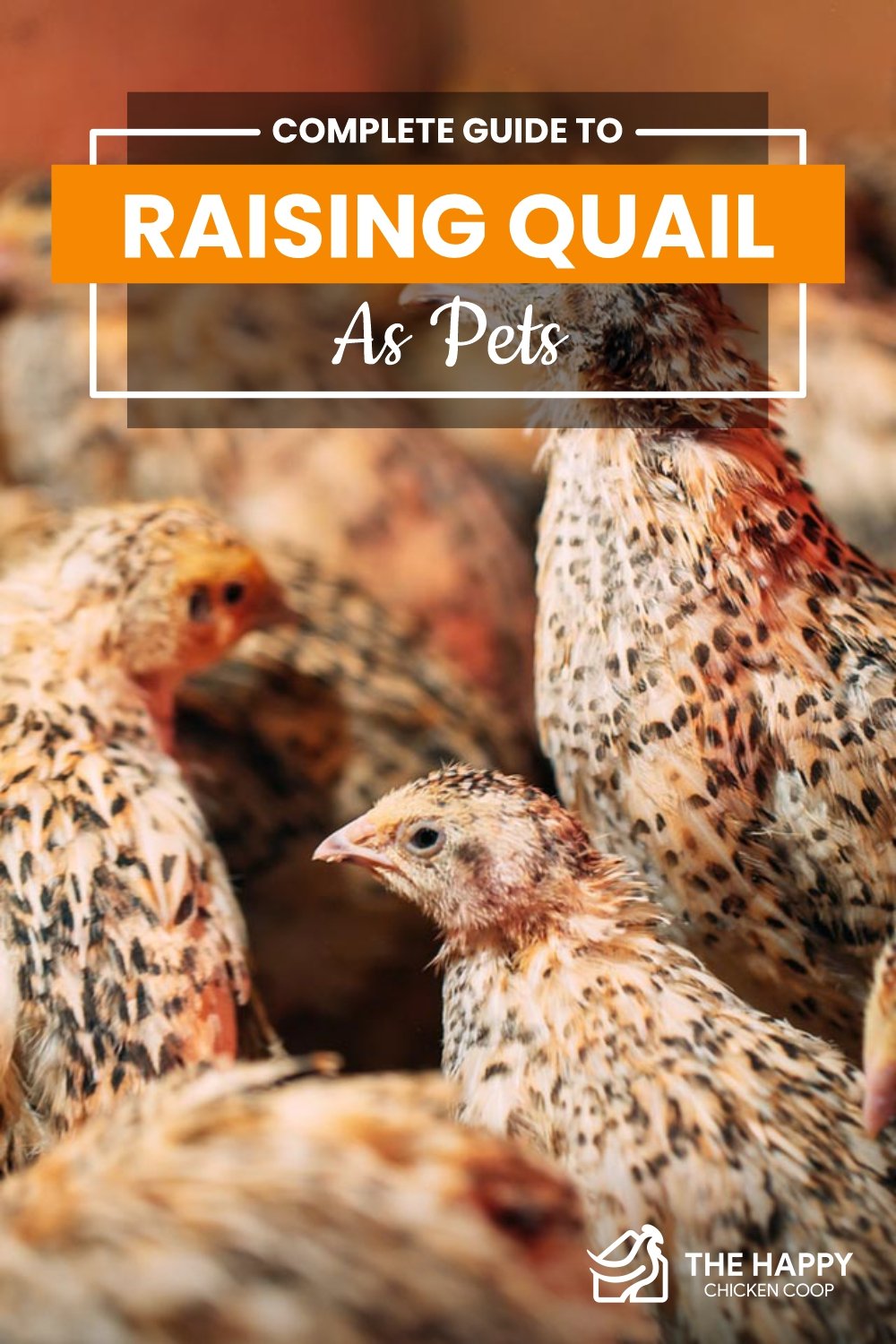 One thought on “Complete Guide to Raising Quail as Pets”