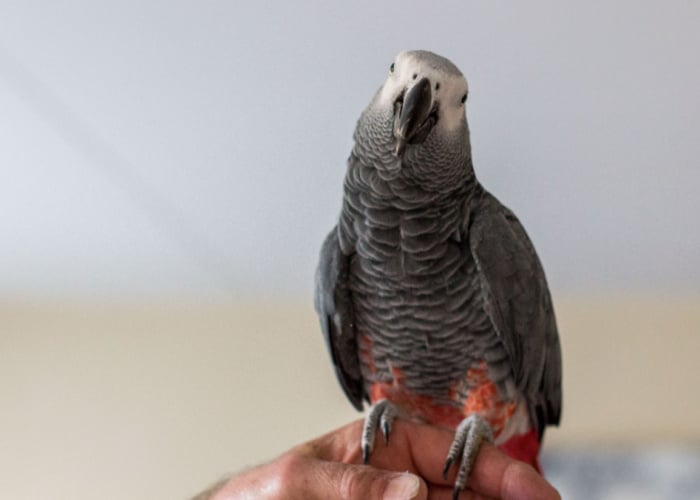 Did you know that birds can amass an extensive vocabulary of 500 to 1000 words? Yes, some pet birds that talk can have such an impressive repertoire of human words.

But what are the best speaking birds, and how do they perform in the speech department?

In this article, we compiled the top 10 best pet birds that talk and their unique communication system.

We’ll also reveal the unglamorous sides of these birds and the science behind talking birds.

Whether you’re planning to get a talking feathery companion or already have one, check out these amazing creatures who are gifted with the ability only humans possess.

Let’s start with the most talkative bird and intelligent species on earth.

1. African Grey – The Most Prodigious Pet Bird That Talk 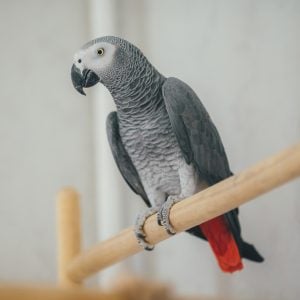 Sitting at the top of our list is the African Grey, the most prodigious avian talker with an outstanding repertoire of 200 human words.

With more extensive training, these birds can build a vocabulary bank of 500 to 1,000 words!

According to a study, they can use their cognitive and communicative abilities the same way as young children.

One of the most popular and smartest African Grey ever was Alex. He’s been the subject of his owner, Dr. Irene Pepperberg, for 30 years, and he learned over 100 English words and 50 object names.

He can even identify colors, shapes, and quantities.

And among the animals and birds on earth, Alex was the only one who had ever asked what color he was.

Unfortunately, he died in 2007, but many genius African grey parrots emerged after him, including Dr. Pepperberg’s Griffin and Einstein from Tennessee. 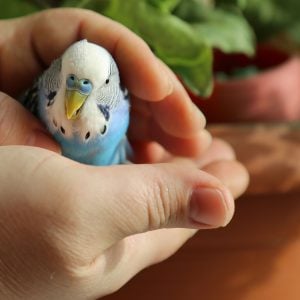 Budgies may be the smallest pet bird on this list but don’t underestimate these stunning creatures because they’re a force to reckon with in the speech department.

In fact, Budgies are the Guinness world record holder for the most extensive bird vocabulary ever!

A Budgerigar named Puck can speak 1728 words, a feat never achieved by any other bird! However, he died in 1994.

But another budgie named Oskar holds the record for the most extensive vocabulary for a living bird. He can speak 148 words which is also an impressive feat.

That’s why they’re one of the best talking birds for beginners.

Budgies may struggle to learn their first word, but once they pick it up, it’ll be easier for them to extend their vocabulary.

But how long does it take to teach a budgie to talk?

It can take several weeks to two months or more. Others can learn a new word in six months. So, patience is the key when teaching these small talking birds.

It’s worth noting, though, that due to their gruff voice, their voice will be hard to decipher.

Pros & Cons of Budgerigars - The Tiny Pets That Talk 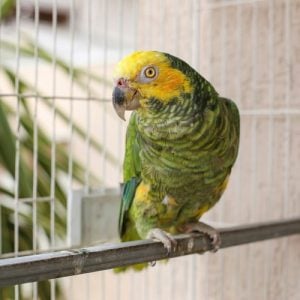 These parrots are among the best talking pet birds in the world, and they’re prized for their exceptional voice clarity that outperforms other parrots.

They can learn around 100 to 120 human words and phrases. But not all species have excellent speaking ability.

Some species are moderately good, while others are better at whistling and singing.

But others can pick up words and phrases quickly with little training.

One of the most advanced Amazonparrot speakers is the Blue-fronted species because they don’t just mimic human words. They can also speak in human-like tones!

Other Amazon pet birds that can talk are: 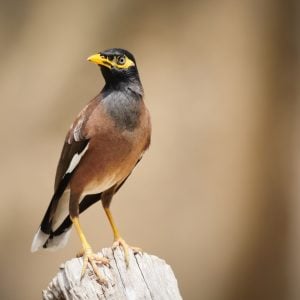 Not all Myna birds can speak, but if trained consistently at an early age, these clever birds can build an extensive vocabulary of 100 words or more!

On top of that, they speak with clarity and can even outperform Budgies and other Parakeets in replicating human pitch and tone.

Black Myna birds can also repeat songs sang by other birds in their territory and mimic car honks and chainsaws.

They’re sociable and adapt well to life in a cage, so they’re suitable for beginners. 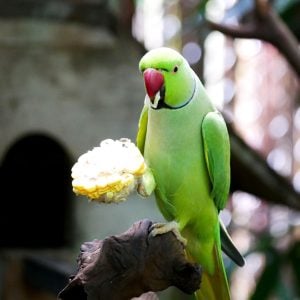 On top of that, they can speak clearly and in complete sentences. They can even show the mood of the phrases they mimic!

So, they deserve a spot on this list for being one of the best parrots that can talk.

However, these parakeets are temperamental and demanding, so they need an owner that can provide enough time and attention and tame them. 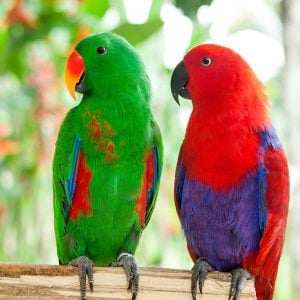 Female and male Eclectus have stark differences due to sexual dimorphism, but both genders can build up a bank of human words.

They’re smart, so they’re easy to train, but you must start the training while they’re young because otherwise, these parrots will be vocal and noisy.

The downside, however, is they can be self-destructive and prone to feather plucking.

But training can help minimize the risk of stress, and it helps to keep them mentally healthy.

This distinctive bird features a bright green plumage with greyish breasts and a greenish-yellow abdomen.

They’re funny but feisty and moody, so they can be either friendly or a handful to humans, depending on their mood.

These parrots have a good speaking ability, with an ability to learn around 40 to 100 words. Other owners claim that their Quaker parrots can use their words in context.

So, they’re fun to talk to despite their tendency to rant when in the mood. 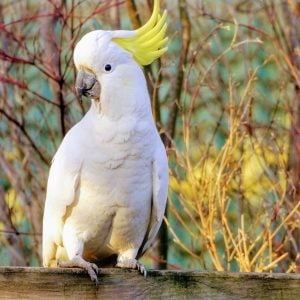 Not all Cockatoos can speak, but males tend to be intelligent and fantastic talkers. Their speaking clarity can be rated average, with a vocabulary of 10 to 30 words.

These birds have a softer voice than other parrots, so it can be challenging to understand their words.

They’re prone to separation anxiety. So, you must limit your socialization routine with Cockatoos to avoid health issues.

Prepare for a screaming and ranting session if you decide to pursue this species because they can be loud and messy sometimes.

Cockatoos are excellent escape artists too! So if you want to contain them in a cage, have a secure lock. 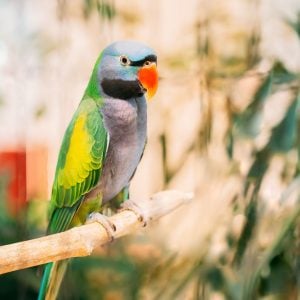 One of the rarest and largest parakeets is Lord Derby’s Parakeet or Derbyan. It is about the same size as the Alexandrine parakeet and about twice as big as a ring-necked parakeet.

Derbyans have an average talking potential, with a vocabulary capacity of 20 to 40 words.

Don’t be surprised when you notice the females sporting a black beak while males exhibit reddish-orange one because sexual dimorphism occurs when they’re adults.

These boisterous and vivacious birds are challenging to teach, but it’s fun interacting with them. 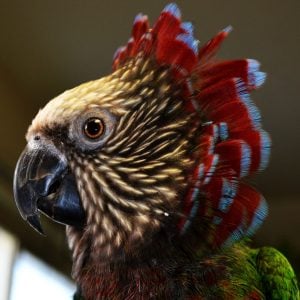 These unique birds, also known as the red fan parrots, can raise their head feathers and the nape of their neck to look huge and more intimidating, like a hawk.

That’s why they were named hawk-headed parrots!

Their speaking ability is low to moderate, but they love to interact with their owners with their soft and whisper-like voices.

These tiny feathery creatures can be moody and naughty, but they’re also cuddly and affectionate. 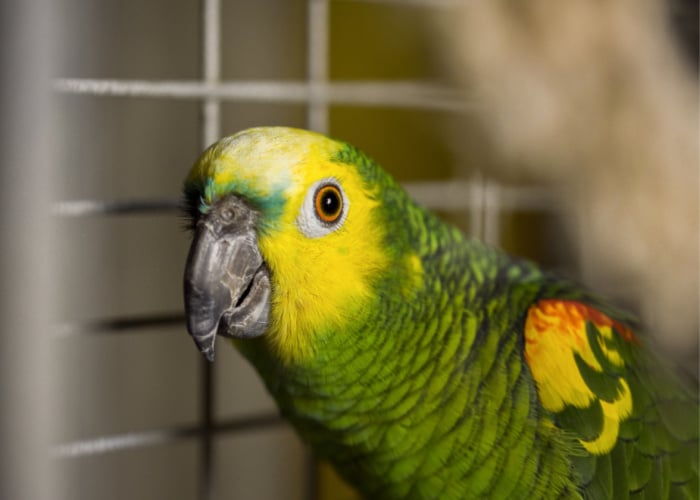 Why Pet Birds Can Talk

Birds can talk because their brain structure is similar to humans, which have a cerebellum and cortex.

On the other end, the cerebellum controls the brain’s voluntary motor functions.

These brain parts are connected by a neural highway called pontine nuclei, which transfer information between them and enable them to work together.

Researchers at the University of Alberta believed that parrots could talk the same way as humans because they have large pontine nuclei.

But their study helped them discover that what birds have is a medial spiriform nucleus, but its functions are similar to pontine nuclei.

Pet birds that talk have more cells in the pallium, which is the grey and white matter covering the cerebellum’s upper surface.

And that is what gives imitation abilities to talking birds.

Parrots cannot talk because they lack vocal cords, yet they can imitate noises they hear.

Birds have a vocal organ in their breasts called a syrinx in place of vocal cords. It is a muscular, liquid-filled space located at the base of the trachea in the spinal cord or brain.

So, they can create different sounds by varying the depth and form of the syrinx since each branch of the structure has an independent valve.

Common Questions About the Types of Pet Birds That Talk

What is the best bird that talks for a pet?

The African Grey is often considered the best talking bird due to its impressive vocabulary and ability to use words in context.

They can repeat human words and phrases after hearing them twice, and they start talking between 12 and 18 months old.

What is the best talking bird for a beginner?

The best starter pet bird that can talk is Budgerigar or Budgie because they’re low-maintenance but striking, friendly, easy to tame, and brilliant speakers.

With proper and consistent training, they can learn hundreds of words.

What is a cheap bird that can talk?

The Budgerigar is also one of the cheapest talking birds you can find. So, they’re perfect for those looking for a talking feathery companion but on a tight budget.

You can purchase a quality Budgie at around $10 to $35 from local breeders or rescue organizations.

What is the easiest bird to train to talk?

Quaker Parakeet or Monk Parakeet is one of the quick learner birds with an extensive vocabulary. They’re suitable for first-time owners.

But if you want an advanced bird, African Greys, Amazon, and Eclectus parrots also make an excellent choice.

How much does a talking bird cost?

It may vary depending on the species, but Budgies typically range from $15 – $100, while Eclectus parrots can be as high as $1500.

You can expect Amazon parrots and African Greys to be even more expensive since they’re advanced talkers.

Which kind of parrot can talk?

African Greys, Macaws, Eclectus, Cockatoos, Budgies, Quaker, and Amazon Parrots can all talk and mimic human words and speech. Other parrots can also talk, but these birds are the most gifted for having an extensive vocabulary.

How long does it take to teach a parrot to talk?

It takes several weeks for birds to learn their first word. You’ll know if your bird is trying to speak when he produces a soft mumbling sound. He will also keep practicing on his own so just be patient in teaching him.

At what age should you start training a parrot?

It may depend on the bird species, but small birds can be trained when they’re around 3 to 6 months, while bigger parrots may take 6 to 12 months.

So that’s a wrap for our list of the best pet birds that talk!

Which of the talking bird species above impressed you the most? If you’re looking for a sizeable brilliant bird with advanced speaking abilities, you ought to pick African Greys.

But sometimes, great packages come in small sizes. So, if you’re a novice pet bird owner looking for tiny, low-maintenance, and the best pet birds for beginners that talk, Budgerigars may be the one for you!

Raising birds that can speak comes with a lot of sacrifices since the more intelligent they are, the more demanding they become. But it can also be an enriching experience too!

A bird that can talk to you can help relieve your stress and brighten up your day with their quirky antics and melodic songs.

But if none of the types of talking birds above are attractive enough for you, check out this pet bird below. Their colorful feathering is a visual treat, and they have the potential to be good talkers too!

READ NEXT: Macaws – Everything You Need to Know About the Giant Superstars