Raising Quail For Hunting And Sport 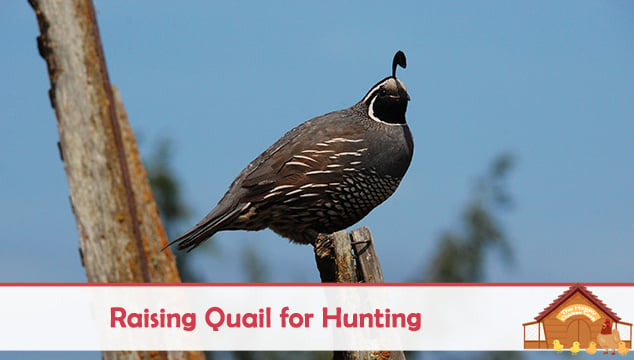 If you love to hunt game birds, finding them in the wild can prove to be somewhat challenging. Rather than hunting wild quail, which might be better off left in the field to promote the growth of the quail population, it can be advantageous to produce your own quail for hunting, selling, or dog training. 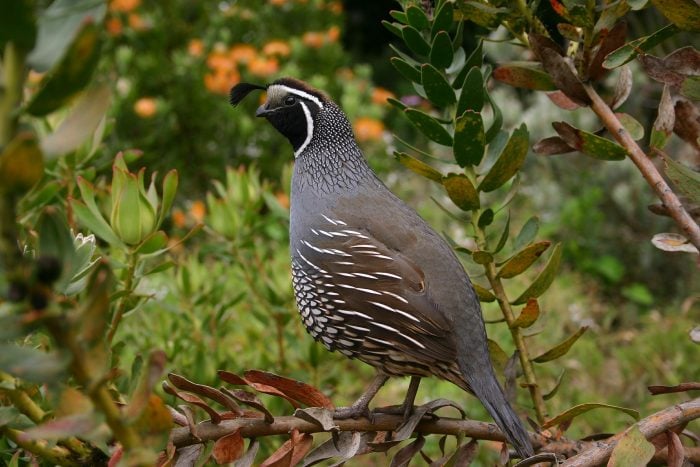 Why Raise Quail as Flight Birds

There are plenty of agricultural benefits to raising quail, such as meat and eggs, but quail are also much more versatile than just being able to provide protein. Quails are perfect for a hunter or hobbyist who wants to have their own supply of birds on hand. The following are the most popular reasons people decide to raise their own flight quails:

If you are an avid game bird hunter, you may decide that raising quail and releasing them on your private land will benefit your hobby by bringing you plenty of game. This is one of the most popular reasons for hunters to raise their own birds, however, there is a slight misunderstanding that releasing quail will also help the wild population already in place, grow. You can raise your own birds, release them, and hunt them knowing there is plenty of game to seek out…because you put them there, but there is very few indications that the stock you release will reproduce on their own as they are not able to thrive (more on this in number 2).
If you decide to go this route, make sure you check into local laws to ensure that you are in cooperation with your state’s Department of Natural Resources. Many states have regulations and licensing permits that must be obtained to ensure that the wild quail population continues to thrive.

2. Raising Quail to Restore the Wild Population (AKA Stocking)

Many attempts have been made to increase the population of wild quail over the years; however, it has come to light that this isn’t necessarily an easy task. Simply raising quail and releasing them into the wild has not proven to increase the amount of quail present in any single area.
If quail have become too comfortable with their human caretakers, they may not have developed the instincts necessary to thrive in the wild, and instead of flushing when a hunter is nearby, they may run to them for feed. In addition, they do not become savvy near highways and many released game birds are hit by vehicles if they are released in highly populated areas.
Furthermore, quail raised in captivity, even in flight pens, do not learn what they need to survive in the wild because, in most cases, they are raised by humans, rather than a quail hen. In the wild, chicks learn the ins and outs of foraging, flying, and protecting itself by merely watching its mother. If chicks are incubated and hatched in captivity, they miss out on these learning experiences.
Most quail hobbyists and hunters tend to agree that more effort should be spent on creating better habitats that both attract and promote the growth of the current wild quail population, rather than releasing quail hoping they will thrive and reproduce.

Perhaps you own a bird dog that you want to train to flush quail, or you want to raise them to sell to dog trainers or other hunters. Pointer breeds like the English Pointer, German Shorthaired Pointer, or Brittany Spaniel are bird-crazy hunting dogs that have an instinct to detect, point, and flush game birds from their hiding space in grasslands. Hunters are then able to take aim and harvest their game.
Hunters and dog trainers will happily pay quail raisers for a few live quail to train with, and some even want them already dispatched for training because dogs tend to learn best with live animal training, rather than with decoys.
If you breed bird dogs and sell them, you can start training the pups early by raising them around quail or by giving them quail to “play” with. You can then market your pups as “started” hunting dogs because they already have the hunting drive from their early experiences with the quail.

Which Quail Breed is Best for Hunting?

The Bobwhite Quail is the top choice for most quail breeders no matter what your intended purpose happens to be. They are magnificent little meat birds, prolific layers, and if raised as a bird of flight, they will produce exciting results. 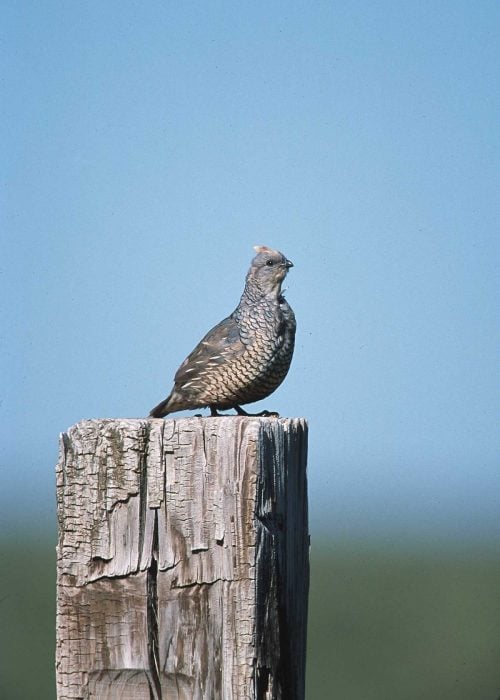 Where to Purchase Quail

You have two options for acquiring your starter stock of quail; from breeders or hatcheries. There is no right or wrong place to purchase your birds or hatching eggs, but it is essential to do your research before jumping in because there is such thing as inadequate stock. You should seek out healthy birds to start with because, you wouldn’t want to produce poor quality quail year after year.

Raising quail chicks is not all that different from raising chicken chicks. Quail are much smaller, however, and tend to be more fragile and sensitive to drafts. The brooder temperature should be set at 90 degrees Fahrenheit to start, and then each week, it can be decreased by 5 degrees.
In the brooder, quail chicks must have access to food and fresh water 24/7, and like chickens, they should be monitored for pasty butt, which could indicate temperature or digestive issues. The feed should be higher in protein in the first six weeks, and luckily, you can find starter feed for game birds at most farm stores and co-ops.

Quail being raised for hunting should be kept in a coop with ample space. These birds should not be raised the same way meat and egg quail are raised because they need to use their bodies to gain strength, learn to forage, and fly.

In some cases, it is typically considered ok to keep quail in a coop that provides one square inch per bird. However, it is best to keep quail intended for hunting in pens that allow for at least 2 square feet per quail.

Flight quail pens should never be positioned close to humans, and where humans spend their time because quail can become familiar with their human caretakers and will not flush well when released, making them less-than-desirable hunting birds. Keeping quail in a coop, or shelter, that is far from people is the best way to foster their natural flight instincts.

A flight pen is exactly what it sounds like; a pen that is constructed to allow for quail to fly freely.  Quail are much better flyers than most barnyard birds. They can fly straight up without the need for a running start. Once in the air, they demonstrate an irregular flight pattern, which is beneficial for evading and confusing predator—and hunters. This type of flight is called “flushing.”
A flight pen can be built from galvanized wire or a mixture of wood, wire, and mesh netting. It is imperative that there is a roof of some sort over the top of your flight pen to prevent quail from escaping and aerial predators having access to your quail.

Quail raised for meat are kept in coops that have lower levels of lighting, which keeps them from becoming too active and losing muscle mass. On the other hand, quail raised for flight should have plenty of natural light to promote activity; this ensures that confined quail are up early, bustling about, and being the quail they were meant to be.

There are different kinds of game bird feed available for various purposes. For example, you can get grower (finishing) feed for meat birds, which has more protein than feed formulated for flight birds.
When feeding quail intended for release, it is crucial to get in and get out of the pen quickly to prevent quail from taking a “liking” to you. If you want to release your quail to hunt them, you don’t want them running to you in the field. Quail feeders and bird waterers that hang on the outside of the pens can be constructed to reduce time spent inside the enclosure, and restrict it to cleaning only.
With that being said, long feeders are often used in flight pens to allow for quail to eat as they would in the wild; spread out and actively moving about. Some quail farmers prefer to sprinkle feed throughout the pen to encourage scratching and foraging, skills necessary to survive in the wild; this is entirely acceptable, as long as the surface the feed lands on is clean from droppings to prevent illness. 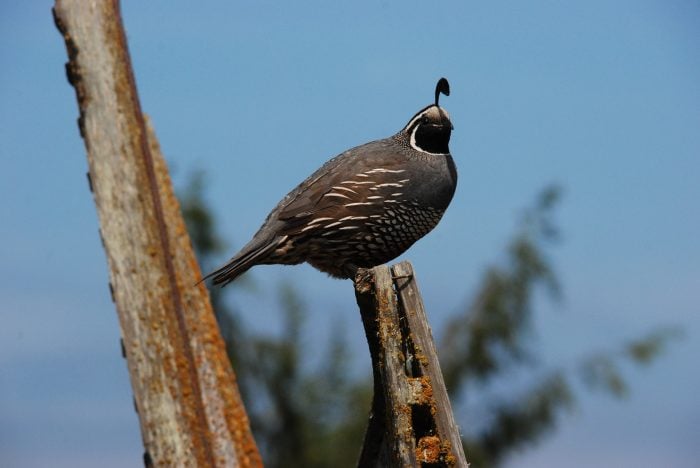 Recalling is a way to train your quail to return to the coop. It allows them to go out to the field, live in nature, possibly be hunted, and return to the pen in the evenings. Like chickens, quail are creatures of habit. If they know where their home is, they will return in the evening knowing they will be safe.
If you decide to train your quail to recall, you should keep one or two hens enclosed in the recall pen as a beacon to those who are in the field. Loose quail will hear the call of the hens and be able to return to the coop. In time, your quail may know their environment well enough and may not need the hen in the evening.
Even quail raised similarly to how they would live in the wild is not enough to help them survive once they are released. The valuable information they obtain from being hatched and reared by a mother hen is not duplicable in confinement. Therefore, if you intend to hunt your quail, it is best to release them close to the time you plan to hunt them. That way, you can prevent loss before being able to pursue your birds.
If you would like more information on raising quail see our ultimate guide to raising quail here. 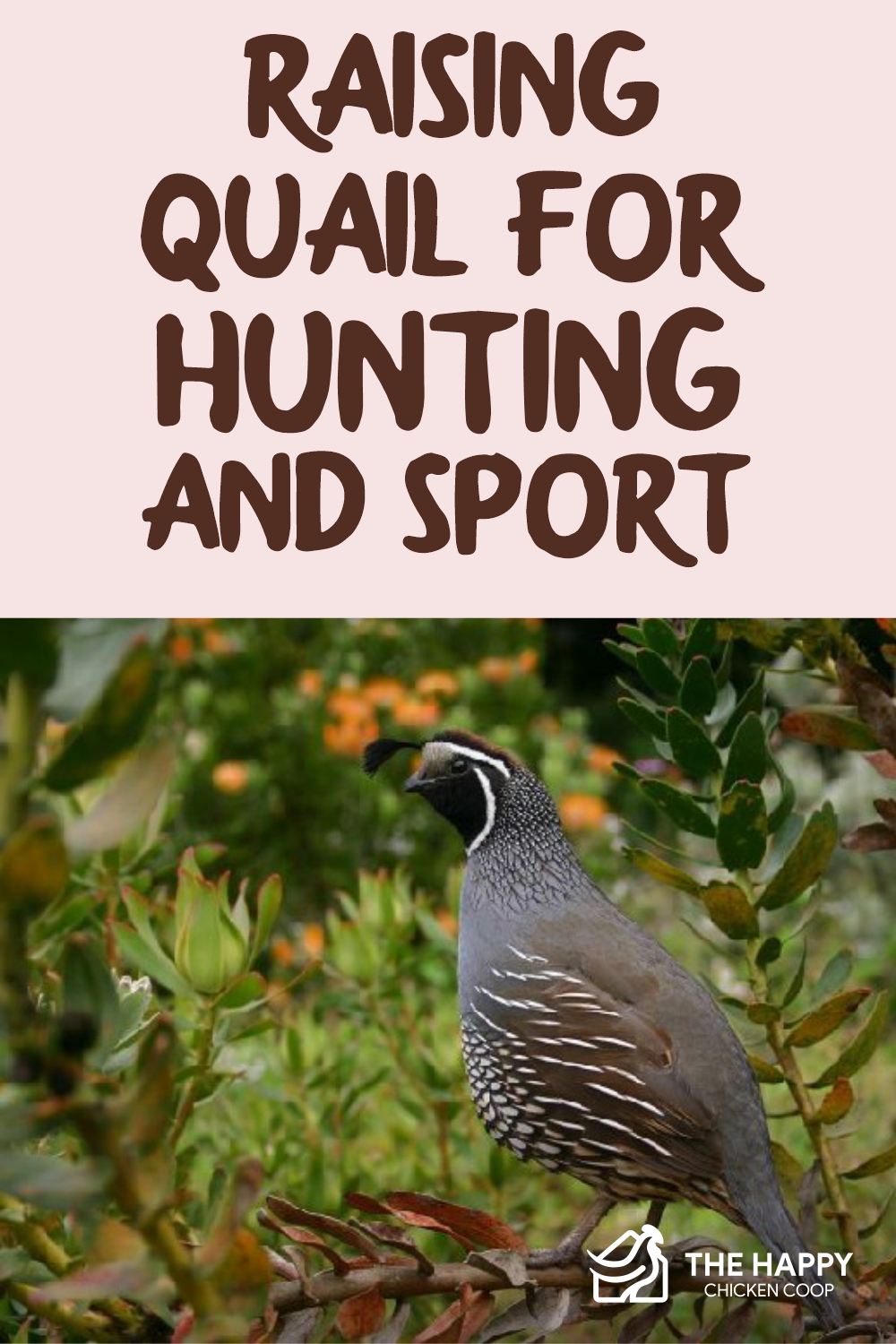 2 thoughts on “Raising Quail For Hunting And Sport”