Raven vs Crow: How to Tell the Difference — A Definitive Guide 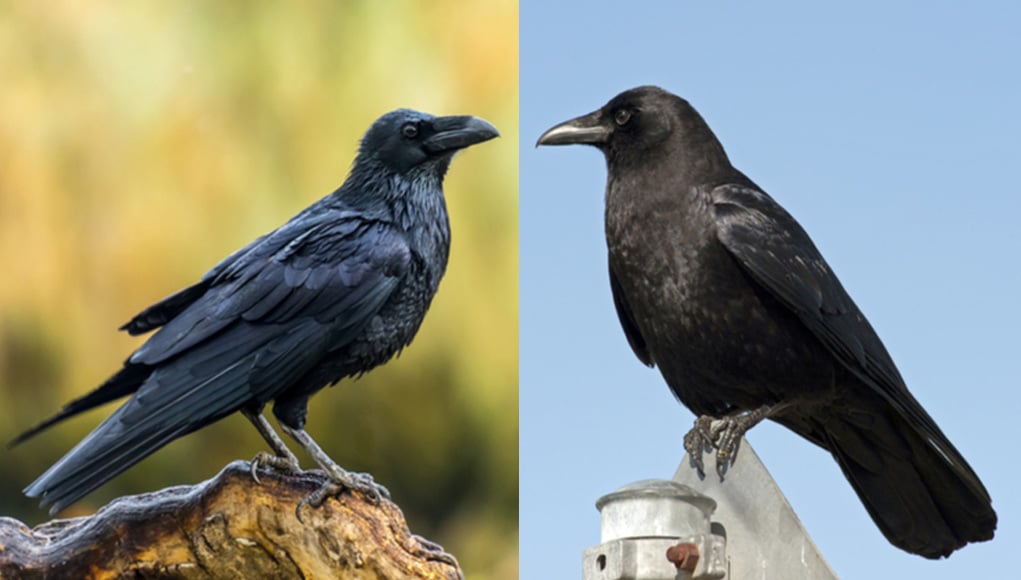 When you hear a croak from a black bird perching on a nearby tree, can you tell whether it’s from a raven or crow?

Can you recognize a crow and a raven when they’re cruising and dancing in the wind?

These birds are closely related since they both belong to the Genus Corvus species.

And they look alike, which is why they are often misidentified and used interchangeably.

But how can you tell them apart?

Today, we’ll reveal 13 tips on how you can distinguish a raven from a crow when they’re:

Whether you’re someone who lives in a place where they overlap or just someone passionate and deeply interested in these birds, you’ll enjoy this definitive guide.

We’ve got many tricks to share with you, but before that, let’s get into the definition of the raven and crow first to avoid confusion. 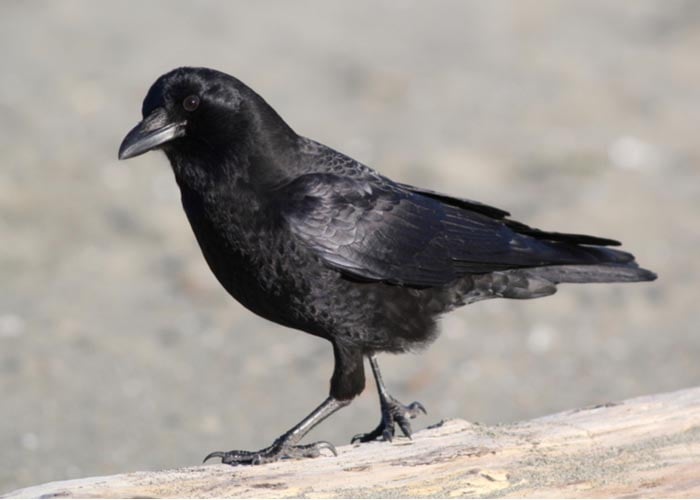 What is a Crow?

A crow(see photo above) is a brilliant glossy bird with black plumage. You can find them in many places around the world.

They’re intelligent creatures who can learn to count aloud up to seven. Some crows can even memorize 100 words and 50 complete sentences.

Others can emulate their owner’s voices to call dogs, while others are inventive pranksters and thieves who steal unattended objects. 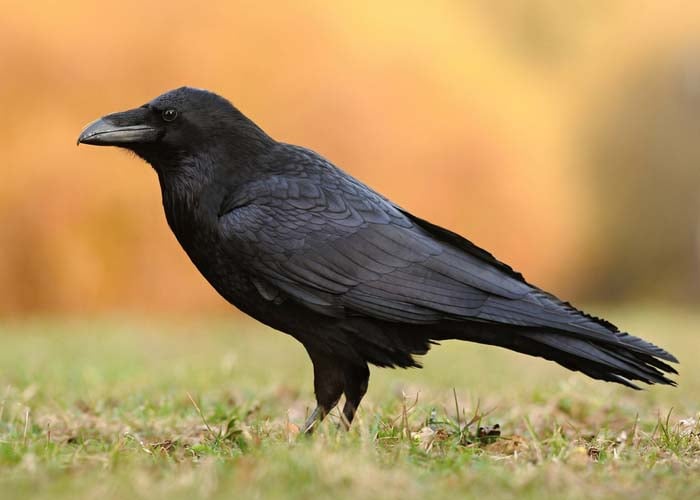 What is a Raven?

On the other hand, a raven is a large all-black passerine bird usually found across the Northern Hemisphere.

Ravens are among the hardiest birds which nestle in the northern tundra, boreal forests, and barren mountain and desserts.

These birds used to be a symbol of death, pestilence, and disease.

But their keen-sightedness, clever and fearless nature has won the hearts of some people.

They’re the largest of all the passerines or perching birds and a well-known acrobatic flyer.

But how can you differentiate a raven and a crow? 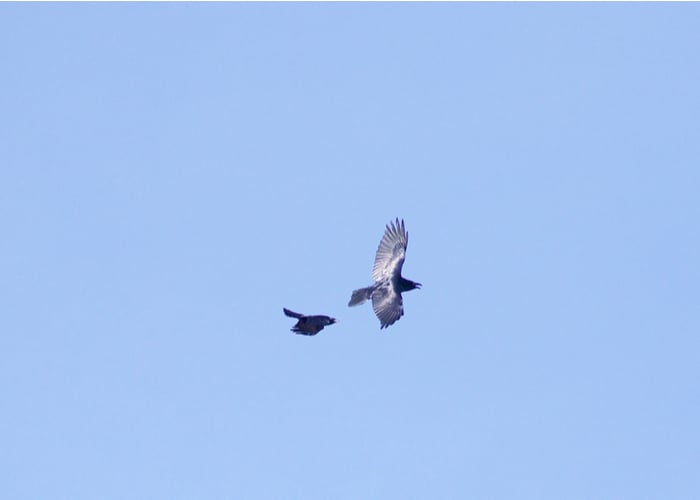 Raven vs Crow: 13 Tips on How to Distinguish From the Two

Here are some tips to help you tell a raven from a crow when they’re perching on a tree or somewhere near you. 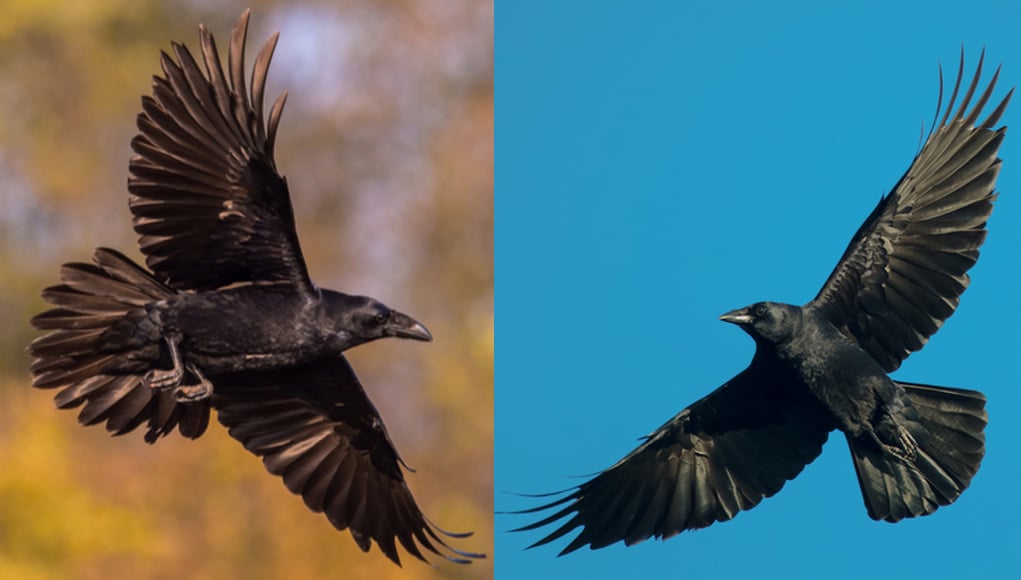 Tips Based on A Raven or Crow’s Physical Appearance

There are subtle differences in terms of their appearance, and looking out for these when they’re somewhere near you can help you differentiate them.

Size is one of the easiest ways to determine which is which.

It’s beneficial if you’re in an area where American crows and common ravens both exist.

Ravens are often as big as red-tailed hawks, which means that they are more significant than crows.

On the other end, crows have an average length of 0.5 meters or 20 inches.

But since there are diminutive ravens and big crows, size doesn’t always offer a reliable hint.

But here’s another tip to distinguish them.

Tip #2. Watch them spread their wings

When in flight, ravens love to do acrobatics and soar.

They can easily catch the thermals and ride them into the sky.

Ravens dive by folding their wings and taking a drop upside-down, sometimes for hundreds of feet.

They also love flying in loops and interlocking talons with another raven when in flight.

Both male and female ravens can do it.

They dive after one another, but sometimes they dive in unison.

Crows, on the other hand, flap more and do not dive.

Wingspan of ravens and crows

Common ravens have a 3.5 to 4 feet wingspan, while crows’ wingspan is around 2.5 feet.

Wingbeat of ravens and crows

When a raven flies overhead, you’ll hear a prominent “swish, swish” sound produced by its wings, while crows usually have a silent wingbeat.

Tip #3. Take a glimpse of their tail

The tails also hint whether the black-feathered bird in flight is a raven or a crow.

On the other hand, the crow’s tails have more squared-off feather tips, so it looks like a fan when opened in flight.

Tip #4. Look at the feathers and throat

Crows’ feathers also have iridescent shades of blue and purple, but they don’t shine as much as the raven’s feathers. 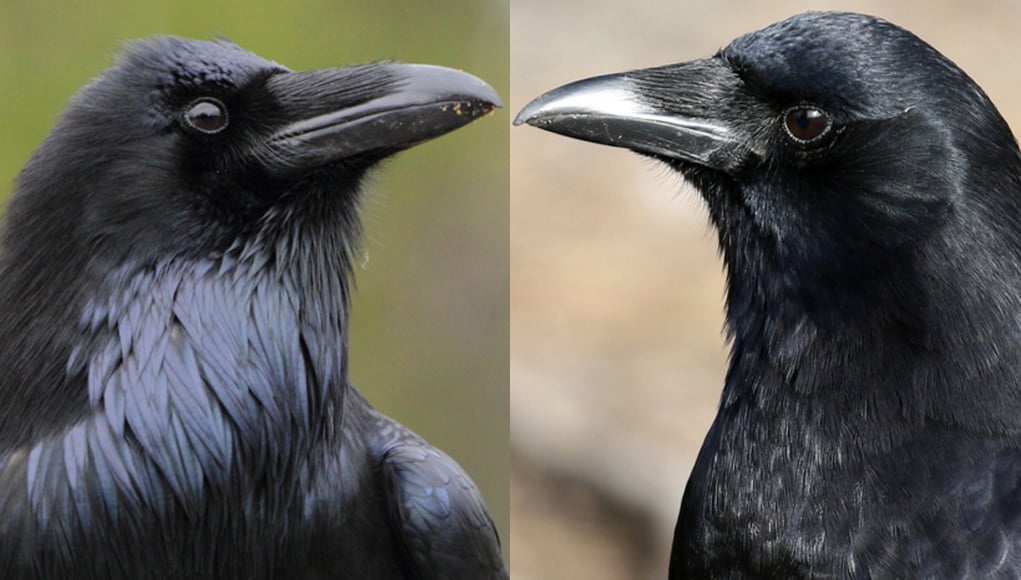 Tip #5. Take a closer look at their beaks

A raven’s beak is thicker, curvier, more cylindrical, pointy, and heavier than that of a crow.

To be precise, it’s thick from the top, but it closes down at the tip.

Aside from the noticeable difference in their beaks, ravens also have a longer neck in flight, and their throat looks broader because of the fuzzy hairs on it.

Geographic or habitat differences of a Raven and a Crow

These black predators have different territories and preferences for their homes.

So, let’s dive at it to see whether the one living in your area is a raven or a crow.

Tip #6. Observe their habitats or territories

You can find ravens anywhere in the Northern Hemisphere, excluding the eastern forests and wide-open Great Plains.

They usually live in:

On the other hand, American crows prefer urban areas or places to put up their nest.

Their preference is a combination of the following:

They’re widely spread in most American states except the southwestern part of the country. 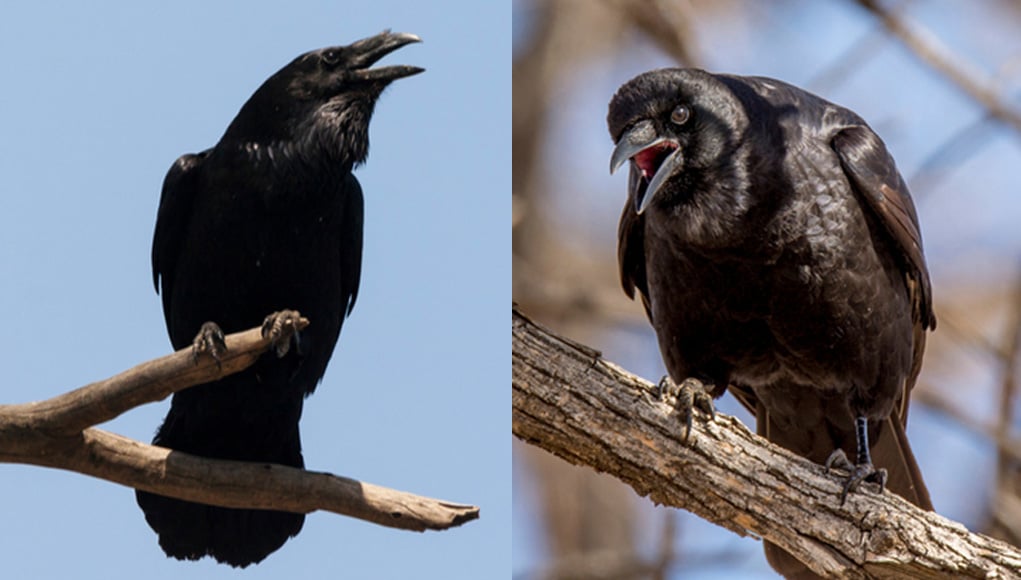 Songs and Sounds of Ravens and Crows

Like other species, ravens and crows communicate through a call, and their vocal differences hint about their species.

Tip #7. Listen to their voices

A raven’s call is usually a deep, hollow, and slow croak that sounds like “crosssk,” “cr-ruck,” “tok,” and “wonk-wonk.”

Its voice is often coarser than that of a crow.

Crows, on the other hand, often caw or awk. This call is often vocalized multiple times like this- “caw caw caw.” It’s more evenly pitched compared with the ravens.

But they can both mimic other sounds such as rattles, knocks, clicks, and coos.

Another tip to distinguish crows from ravens is that a crow makes a call, the other crows join in.

On the contrary, ravens usually produce a croaking sound alone. 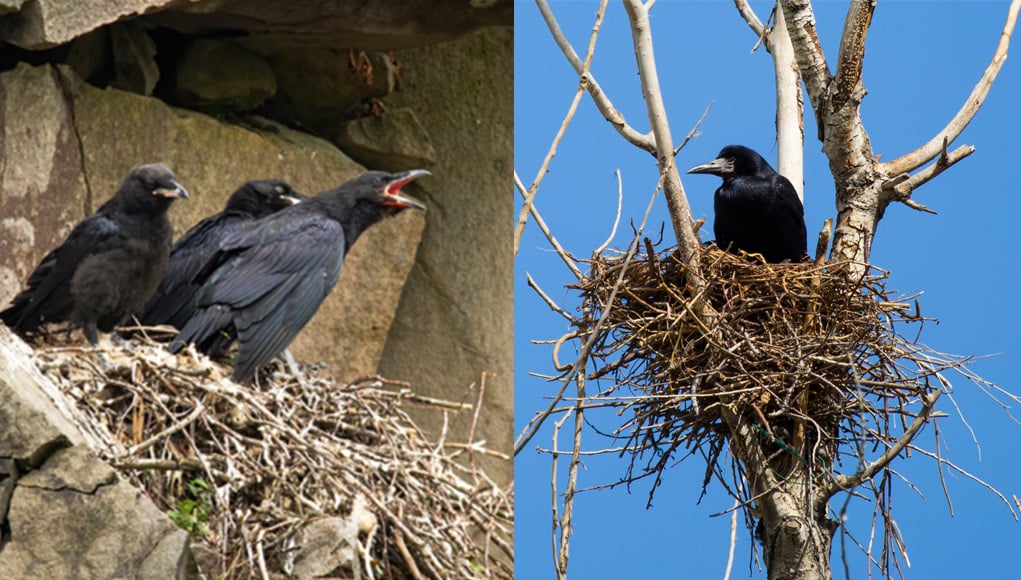 Behavioral Differences of a Raven and a Crow

Aside from their outward differences, ravens and crows also have different habits and traits.

Taking time to see observe these behaviors can also help you distinguish them from one another.

Tip #8. Take note of the raven and a crow’s nesting habits

American crows roost at large groups in deciduous and coniferous trees during the non-breeding season(November to March).

They’re defenseless at night, so gathering together in large flocks and in a spot where they can have a good shelter and visibility is crucial.

They prefer cities since there are fewer predators in populated, residential areas.

On the other end of the spectrum, ravens usually roost on cliff ledges or large trees.

A raven’s nest usually looks like a cup, and it’s crafted from twigs.

Female ravens usually lay 3 to 7 in a nest and incubate for about 18 days.

Both the female and male ravens share the responsibility of taking care of their young ones.

And when they reach 5 to 7 weeks of age, their young may leave the nest and disperse.

But others may opt to stay in the place where they were born.

Tip #9. Do a bit of research if they migrate

The American crows are partially migratory species which means some of them to migrate while others don’t.

Some of the well-known migratory crows are those living in central Canada during the summer breeding season.

They travel from the south to the interior United States to escape the trying weather and find food.

Ravens, on the other hand, are residents in their usual location.

Cooperative breeding is the reproductive strategy characterized by alloparental care.

It means that the offspring can receive care from their parents and other members of the flocks, called helpers.

Tip #11. Watch them while cruising the air

Ravens spend more time soaring in the sky as they search for their favorite prey- the carrions.

Carrions have unpredictable location and availability, so it would take some time for ravens to find them.

They also like to show off their barrel roll moves to advertise their territory.

So, if you spot a blackbird barrel rolling or diving the thermals for a long time, chances are they are ravens, not crows.

The crows and ravens are often hostile to one another.

But if you expect ravens to be the primary attacker, well, that’s not the case.

Crows are often more aggressive, but ravens tend to lay waste to crow’s nest if there’s a chance.

Mighty ravens have a longer lifespan than crows. 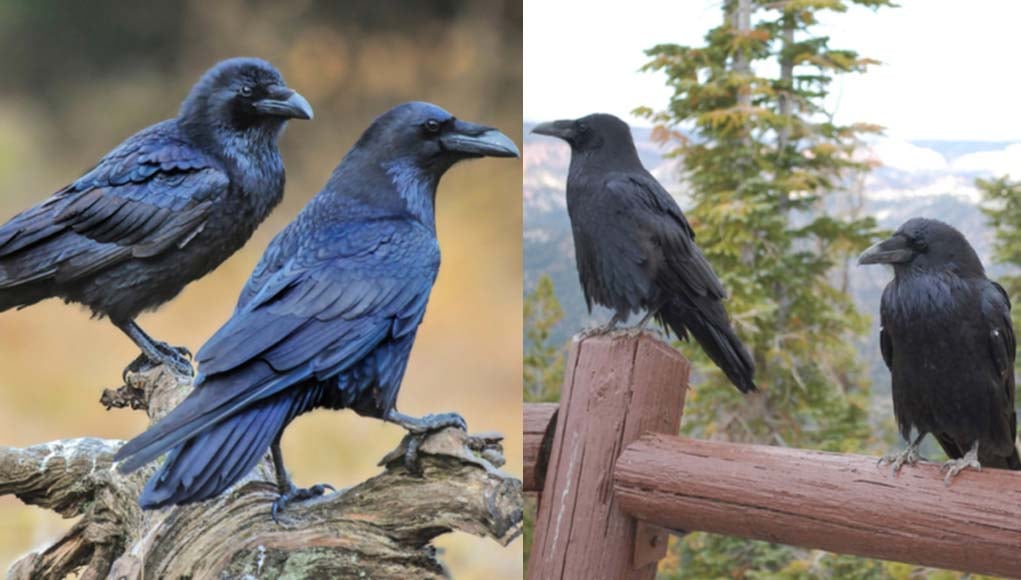 Similarities of Ravens and Crows

As mentioned earlier, ravens and crows come from the same family.

Therefore, it’s not surprising that they share similar behaviors and characteristics, which includes the following:

Both are opportunistic omnivores

These clever predators are both omnivores which means that they both feed on plants and meat.

Crows enjoy eating meat, and they tend to attack and kill young and weak animals.

They also feed on insects, berries, carrions, and other birds’ eggs.

They also work with other crows to steal food from animals like otters, vultures, and water birds.

Ravens also use the same cooperative technique in hunting, and they also prey on eggs and other birds’ nestling.

Rodents, grains, insects, and worms are also one of the common raven’s target preys.

Both crows and ravens are scavengers, and they sometimes dine on human garbage.

Ravens and crows are both clever and intelligent as they can both recognize human faces.

Additionally, they know how clever strategies to get things done, like throwing nuts into the ground to open them.

Another indicator of their intelligence is their ability to communicate with other crows and ravens through call.

Their messages can either be a warning, a threat, or a cheer to other birds, depending on how it sounds.

According to researchers, ravens have over 20 distinct patterns, while crows can produce about 250 sounds.

Both crows and ravens are highly sociable.

These species are both friendly, but ravens are usually more playful, and they find doing acrobatic displays fun and enjoyable.

The law protects both ravens and crows.

The Migratory Bird Treaty Act protects both ravens and crows in the US.

The law states that you can’t kill, possess, sell, barter, purchase, transport, or export these species, their eggs, nests, or any part of them unless you adhere to the terms of a valid Federal permit.

This law helps prevent ordinary people from keeping ravens and crows as pets.

If a person finds and rescues a crow, they have to turn it over to a licensed professional.

The law also prohibits the hunting of ravens under any circumstances.

However, the states can designate a regulated hunting season for crows but with some restrictions.

Furthermore, you can kill a crow without a license under the 50 CFR 21.43 of the Migratory Bird Treaty Act outside the regulated hunting season if:

However, this depredation exception does not cover the ravens.

Whether a raven and a crow are in flight, perching on a tree, or sitting right beside you, identifying them is possible since these breeds have differences that set them apart.

Ravens are usually larger; their beaks are thicker and curvier, their black plumage is shinier, their tail is wedge-shaped, and they live longer than crows.

On the contrary, crows have smaller lengths and wingspans; their feathers are less shiny, their tail is fan-shaped, and they have a shorter lifespan.

And remember the sound Gronk-Gronk is the iconic call produced by a raven.

Crows’ call, on the other hand, sounds like craw-craw.

However, it’s worth noting that there are also myriads of raven and crow species.

So the indicators mentioned above may vary depending on each species.

But what’s clear is both these birds may attack your coop and kill your tiny and weak chicks.

So, how can you protect your chickens from these powerful predators?

Check out the article below to know how.

READ NEXT: 21 Tips: Keeping Your Chickens Safe From Predators 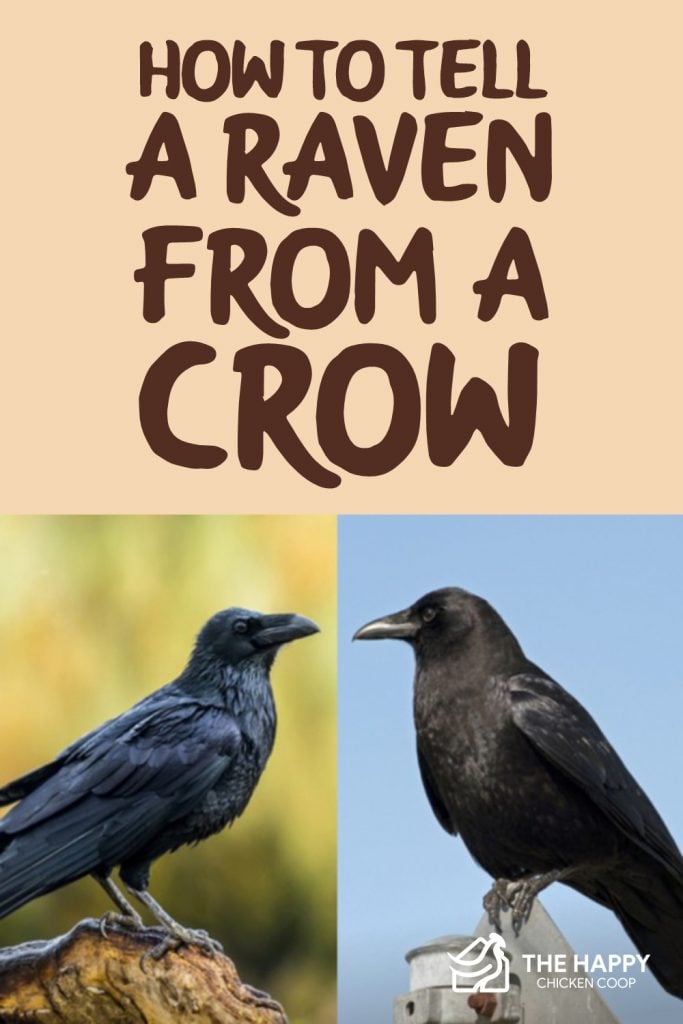