When To “Worm” Baby Goats 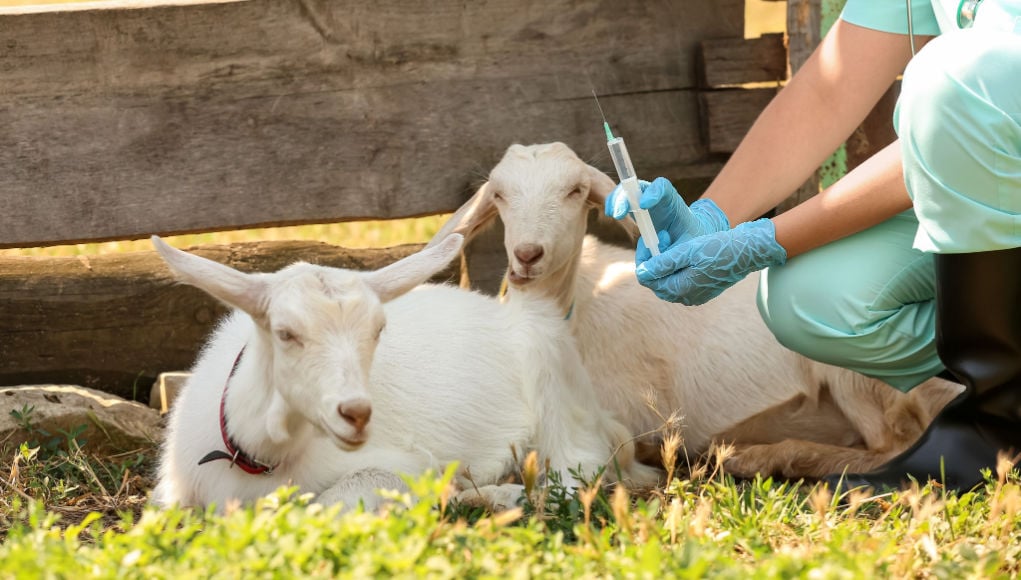 When new baby goats finally make their grand arrival into the world, they are so unbelievably cute that it’s hard to think straight.

But once you finally realize the new responsibility, you’ll understand that there are so many things to worry about.

You’d be worried about the baby goats’ health first, of course. And it’s inevitable that this question may cross your mind: when to “worm” baby goats?

Mama goats have their regular deworming sessions but should baby goats or kids do the same thing?

Learn all there is to know about when to worm baby goats and how you can prevent worms in goats.

When to “Worm” Baby Goats: Deworming vs. Worming Baby Goats

You may have heard both the terms worming and deworming, but are they the same thing?

These two terms are often used interchange, but deworming is the proper term while “worming” is the incorrect, albeit common term.

“Worming” a goat is the same as “deworming” a goat. Both mean that you are applying medication to the animal to kill off internal parasites living within the goat. 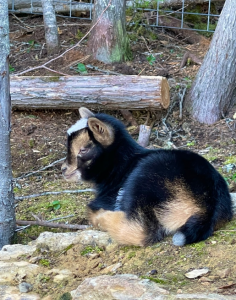 When Should I Deworm My Baby Goat?

Baby goats should be dewormed at four to six weeks of age. You should continue to deworm your baby goat every four weeks until about sixteen weeks old.

This means you will deworm at approximately four weeks, eight weeks, twelve weeks, and then at sixteen weeks old.

After the age of sixteen months, deworm every four to six weeks until September.

If the weather freezes and stays cool, you can reduce deworming to every eight to twelve weeks (approximately every two to three months).

How Much Dewormer Do You Give a Baby Goat?

Most dewormer medications indicate that you should give each baby goat two milliliters (2ml) subcutaneously (under the skin, with a needle) for their first treatment.

After the first treatment, you can give baby goats their dewormer orally as a paste, in premixed feed, or as a drench.

We do not recommend drenches. While they are incredibly fast and convenient to apply, they only kill about fifty percent or fewer of the internal parasites, which can result in swift and strong dewormer resistance.

Different Types of Baby Goat Dewormers And Their Dosages

Please note that each of these dewormers has a withdrawal time for meat and milk.

This means that you should not harvest nor milk your goats for human consumption during the withdrawal period.

Meat-purpose withdrawals are usually double the length of time for dairy consumption withdrawal.

You can read more about these periods and other important information about these dewormers here. 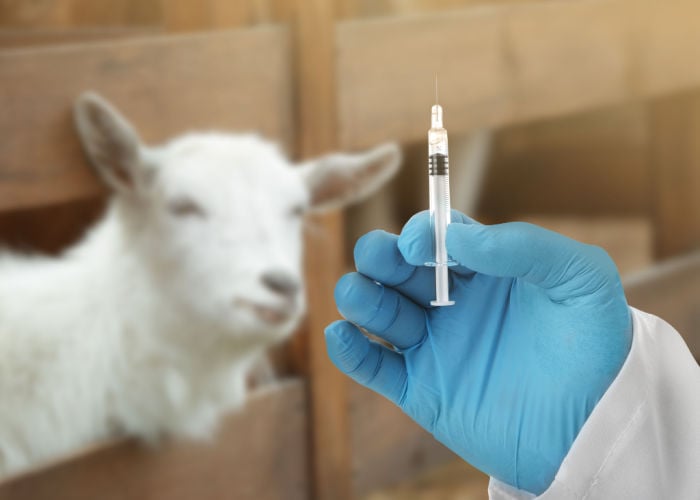 What Is The Best Type of Dewormer for Baby Goats?

The best dewormer for baby goats is “white dewormers”—dewormers that come in a white paste.

They are highly effective at removing tapeworms and several other parasites. These benzimidazole dewormers include fenbendazole and albendazole.

You’ve probably heard of them as Panacur, Safeguard, or Valbazen.

Safeguard is the only dewormer that is approved for use in goats. Still, the other brands/ingredient types are used “off-label”.

Not sure what off-label means? Let’s cover that in simple terms in the next section.

Clear dewormers (which are usually transparent) are generally stronger. However, it is advised only to use them when white dewormers have failed.

Ivermectin and Moxidectin are clear dewormers; Moxidectin is much more potent than Ivermectin, so be aware of that.

Clear dewormers are not labeled for goats, but they are approved for oral or pour for extra-label uses.

Remember that pour-on (drenchers) should never, under any circumstances, be administered orally.

Off-label means the drug is approved, but the usage is unapproved by professionals.

Goats are minor species that are not at all profitable for drug companies to test on for FDA approval.

Luckily, the Animal Medicinal Drug Use Clarification Act of 1994 created a set of care guidelines to help consumers use dewormers off-label while still keeping the animals safe.

Off-label does not inherently mean dangerous or risky.

Many medical doctors offer “off-label” medical treatment, such as using chemotherapy to treat one kind of cancer, while healthcare providers use it to treat a completely different type of cancer. 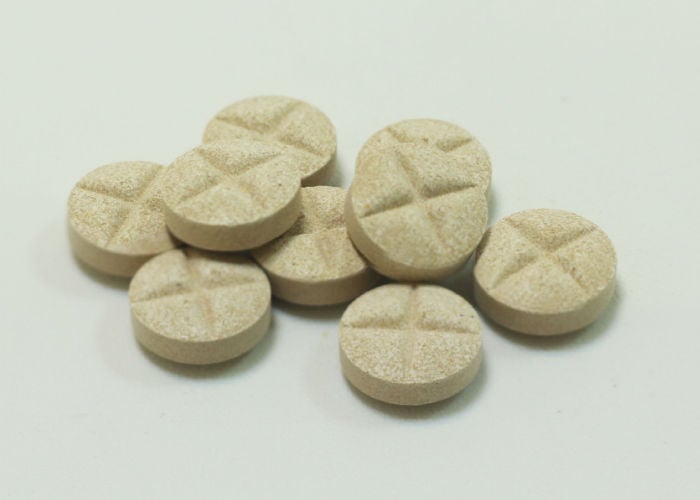 What Is The Best Type of Dewormer for Adult Goats?

The best goat dewormers are white dewormers, such as Benzimidazoles (Valbazen, Syanthic, Safeguard, and Panacur). Safeguard is the only approved goat dewormer.

With that said, you can use any of the above-listed dewormers off-label, so long as you follow the dosing instructions carefully.

The most powerful goat dewormer is Moxidectin. It should only be used if all others fail due to parasitic resistance.

How Often Should You Deworm Baby Goats?

After that, it is okay to only deworm them once every month to a month and a half.

When cold weather finally rolls around and freezes the ground, you can drop deworming practices down to once every two or three months. 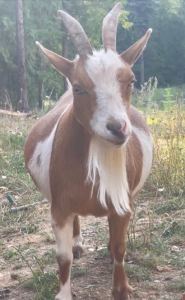 How To Prevent Worms in Goats?

There are several precautions you can take to prevent worms in goats:

You can read more about organic deworming options, as told by PennState. 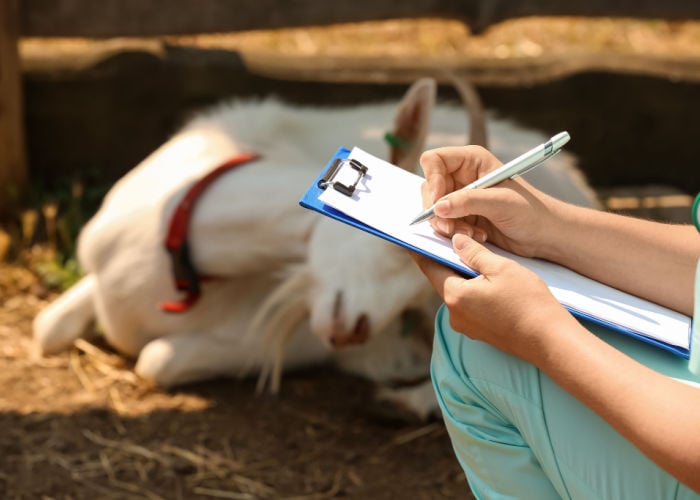 Why Do Some People Not Deworm Their Goats?

Some people do not deworm their goats on a schedule, or sometimes at all. The reason for this is because of parasitic deworming resistance.

All creatures, people included, have some worms living inside of them.

The goal is not to have zero worms but instead to have a safe, manageable population that is not detrimental to the host.

Since there are only three different types of dewormers, it is incredibly easy for the worms to build a resistance against them and fast.

Many farmers and ranchers believed that animals should be dewormed every month without exception.

Once people learned about resistance, they began to rotate active dewormer ingredients (brands) to hopefully end the resistance. This ended up making the parasites immune to all three types.

In the past five years, our knowledge and understanding of deworming drugs, resistance to parasites, and good animal husbandry practices have completely exploded with growth and new discoveries.

Some farmers and ranchers have decided to forgo deworming altogether. They are choosing to breed goats that prove to have low egg counts in fecal matter, and then cull those that struggle with internal parasites.

Instead of breeding parasites to grow stronger against the dewormers, they have instead opted to make their goats resistant to the parasites.

This is a lengthy and expensive process, but we are thrilled to see the results of their meticulously hard work.

Parasitic deworming resistance is a serious problem, but so are parasites in general. Internal worms can severely harm or even kill goats, so they should be taken very seriously.

At the end of the day, it is your farm, your animals, and your call. You can weigh the pros and cons, trust your instinct, and make that call on your own.

Research unveils brand-new discoveries all the time, which excites me. At the moment, I think the best option is to deworm goats as needed, not on a schedule, but that is just my preference.

I would love to see your opinion and why you think the way you do.

READ NEXT: Castrating A Goat