Blue Swedish Duck – Everything You Need to Know 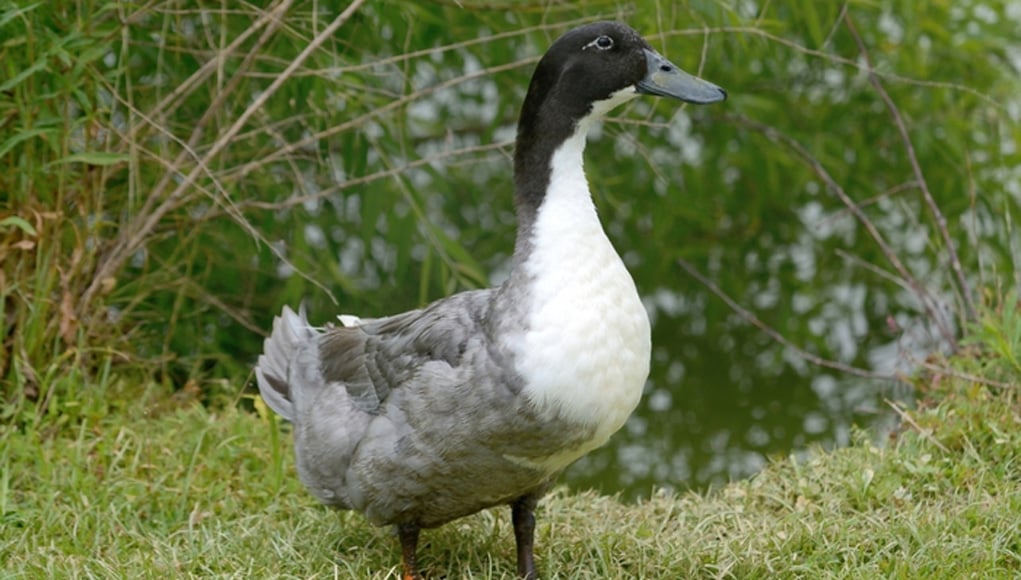 Looking for a hardy duck breed with beautiful blue feathering and decent meat and egg-laying performance? Look no further than the Blue Swedish duck!

This utility duck is often underrated but it has so much to offer to your existing flock.

Whether you’re planning to keep a Swedish duck as a pet, an ornamental breed, or a table bird, this guide can help you weigh in if it’s right for you.

The origin of the Swedish breed can be traced back to the country of Pomerania back in 1835, which was a part of the kingdom of Sweden at the time. Hence, the name Swedish duck.

It was first imported to the United States in 1884 and was accepted into the American Poultry Association’s Standard of Perfection in 1904.

But obtaining a real Blue Swedish duck is challenging because it doesn’t breed true.

When a blue drake and blue female mate, only 50% of the offspring is blue. The other 25% will be black and the remaining 25% will be splashed or silver.

Breeding Black Swedish with Silver or Splashed has a higher chance of producing true Blue Swedish.

Other breeders utilize two pens; one pen contains male Black Swedish ducks with Silver females while the other has Silver Swedish males with Black females. 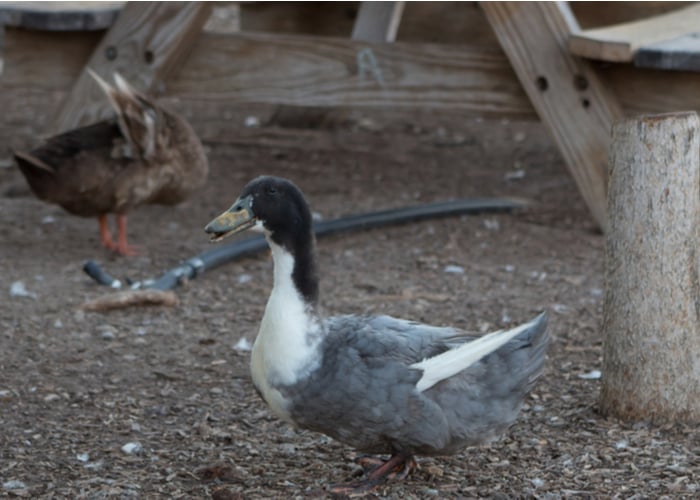 This breed boasts an attractive blue coloration with a white bib running from under the bill to halfway down their breast. There are also splashes of white on their wings which create a beautiful contrast.

Swedish ducks have an oval head, a medium-sized bill that’s nearly straight along the top line, and a stocky body with a carriage around 20 degrees above horizontal.

The breed’s size and shape are similar to medium-sized Rouen ducks.

Blue Swedish is the standard variety but there are also Black, Silver, or Splashed color variations.

How do you tell the difference between a male and female black Swedish duck?

You can tell them apart through their bills and size differences. Blue Swedish drakes have greenish-blue bills while their female counterparts can be distinguished through their bluish-slate-colored bills.

Furthermore, males are larger than females. On average, Blue Swedish ducks weigh 6.5 to 8 pounds but the standard for adult drake is 8 lbs while females should be around 7 lbs.

Whether you’re planning to raise Blue Swedish ducks as pets or for egg and meat, it’s worth considering their personality to ensure they can blend with your existing flock.

Yes, Blue Swedish birds are generally calm and friendly although they can be shy sometimes.

They’re a good option for those looking for family pets, ornamental breeds, and an ace for exhibitions. 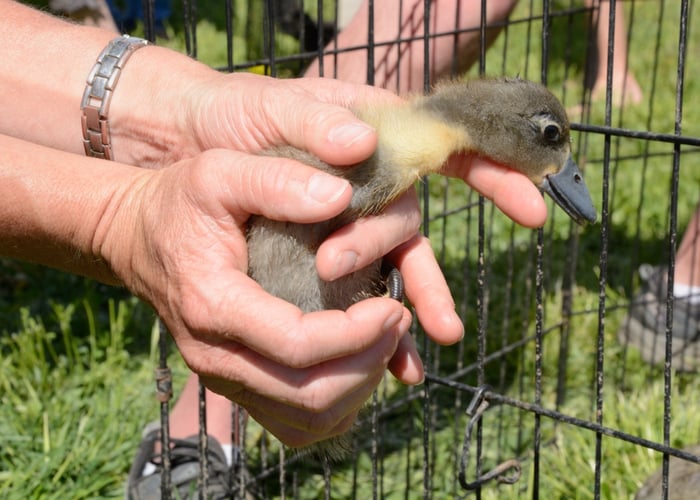 You may wonder what are Blue Swedish ducks good for. So, before purchasing one, check out how they perform in the egg and meat department.

How many eggs does a Blue Swedish duck lay?

Blue Swedish ducks can produce 130 to 180 eggs per year. It’s not as prolific as other breeds like Khaki Campbell but their eggs are large, weighing around 65 to 90 grams and they’re pretty as well.

Their eggs are usually white but others can occasionally produce blue, gray, or green-tinted eggs. Black Swedish duck eggs are also similar to the Blue standards.

At what age do Blue Swedish ducks start laying eggs?

A female duck becomes sexually mature and starts laying eggs when they’re about 6 months old but others may not produce eggs until they’re 7 months old. Then they incubate it for 28 days to hatch.

Blue Swedish duck eggs are high in protein and essential amino acids. It’s also a rich source of cholesterol and fat including some vitamins and minerals.

Duck eggs are generally healthier than chicken’s not just because of their larger size but also because they offer more nutrients such as:

Furthermore, Blue Swedish eggs also contain carotenoids that protect DNA and cells from oxidative damage and keep you away from chronic and age-related diseases.

However, you have to take caution when eating duck eggs because they can trigger allergies in infants and children and may cause heart disease due to their high cholesterol content.

Blue Swedish ducks aren’t the largest duck meat breed but they offer tend, juicy and tasty meat, thanks to their natural eating habit in the field. They reach the table weight by four months or 16 weeks.

It’s best enjoyed when dried and cooked. The meat is a bit moist and darker than other duck meat but it’s fatty.

But the good news is it contains high amounts of protein, iron, omega fatty acids, vitamin B, and selenium.

A little reminder though when preparing duck meat; make sure to cook it thoroughly at around 165 degrees F before serving it. And store it in clean food storage containers to minimize the risk of food poisoning caused by salmonella and other bacteria.

The Swedish ducks, especially the standard Blue are hardy and resilient birds. They can live up to 8 to 12 years but it may vary depending on how well they’re taken care of and their environment.

Sadly, Swedish ducks are on the “watch list” of the American Livestock Breed conservancy which means endangered. Drastic measures must be taken to protect this breed and help its population recover again. 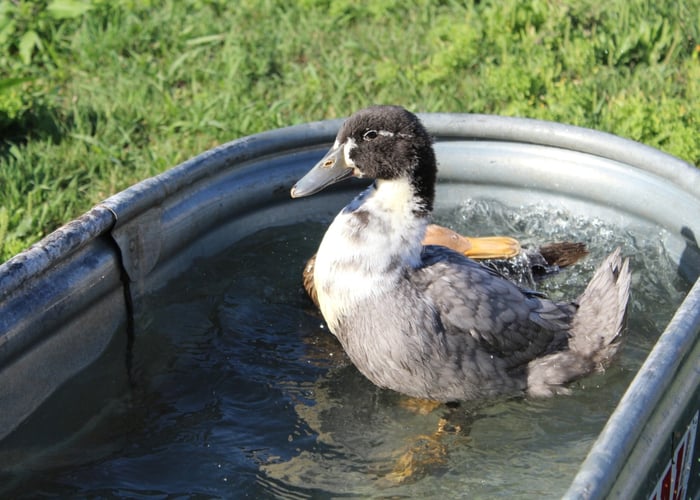 How to Raise Blue Swedish Duck

Are you willing to invest time and money in raising this duck? If yes, you need to be ready to provide the following basic duck needs:

Swedish ducks are excellent foragers so they thrive when given the chance to free-range. They usually eat bugs, insects, and plant matter.

But it’d be best to provide them with pelleted duck feed, especially if you don’t have enough space for foraging. Then, supplement it with bugs, insects, worms, and greens to make them healthier and more productive.

As for Swedish ducklings, they need a chick starter with high amounts of Niacin.

Don’t forget to give them accessible fresh, clean water, especially during the hot summer months.

They’d thrive even more if you’d provide a pond or tiny pools for them where they can swim and exercise. So, we recommend having one.

Foraging can be a form of exercise for ducks as well. So, if you have no pool, having regular walks and play sessions should be able to compensate for that.

A chicken coop or converted sheds are enough to provide shelter for Swedish ducks. But you must place it in a cool shady place so they can stay comfortable during the hot summer months.

Note that this hardy breed prefers nestling down and resting in foliage over roosting in an enclosure.

The ducklings on the other hand need a separate brooder away from adult ducks to keep them away from accidents and injuries. But you may mix them with adult ducks when they’re fully feathered.

A Swedish duck can survive alone as a pet but this kind of bird will be happier if kept as a pair or in small groups.

Swedish ducks enjoy each other’s company and will be less stressed when they have someone they can swim with and talk to.

Although Swedish ducks are generally healthy and low-maintenance, they may develop some illnesses or injuries. So you need to look out for signs of these diseases that most ducks encounter:

If your bird feels unwell, it’s best to call your avian vet right away to have her undergo a medical checkup.

Where to Find Blue Swedish Ducks for Sale

Blue Swedish ducks are rare nowadays so if you can’t find a reputable breeder in your area, try checking out these farms and hatcheries:

These farms offer male, female, and unsexed Swedish ducklings. But the availability may vary.

How much do Blue Swedish ducks cost?

Swedish ducks’ price starts at $9 but the more you order, the bigger the discount will be. However, you have to take note that female Blue Swedish ducklings for sale are a little more expensive than male ones.

You can find male blue Swedish ducklings sold at $7 but females are around $13.

How do you tell if a Blue Swedish is male or female?

To differentiate the male and female Blue Swedish Duck, we need to determine their colors. A male Blue Swedish has a darker blue head and a slightly green color in its beak. While the female has the same color on its head and beak.

The direct answer is yes. They have good tasty meat and even good layers. So they are great on farms.

Though they are not used for any exhibition, they are the ones who can produce the elegant Blue Swedish duck. They only need to be mated with the Splash or Silver Swedish.

Swedish ducks are one of the smartest and sharpest ducks. They are very good at searching for food, especially when they are free to roam around.

That ability helps them avoid starving and provide for the needs of their ducklings.

Blue Swedish ducks belong to the dual or even triple-purpose breed of ducks. They are good layers and a good source of meat because they could weigh up to 80 to 90 grams.

Aside from that, because of their outstanding look, they can also be part of an exhibition for ducks.

All breeds of ducks belong to omnivorous animals. This means that they could any kind of food, no matter how it looks or tastes.

Fish is a good source of nutrients that a duck needs to nourish its body and health. So, it can be a better addition to their everyday meal.

This Black Swedish duck makes an excellent pet because of their calm and friendly personality. They can’t give any harm to anyone even to children, especially when they can roam anywhere they want.

That is why most people loved to keep them in their spacious backyards or farmland. 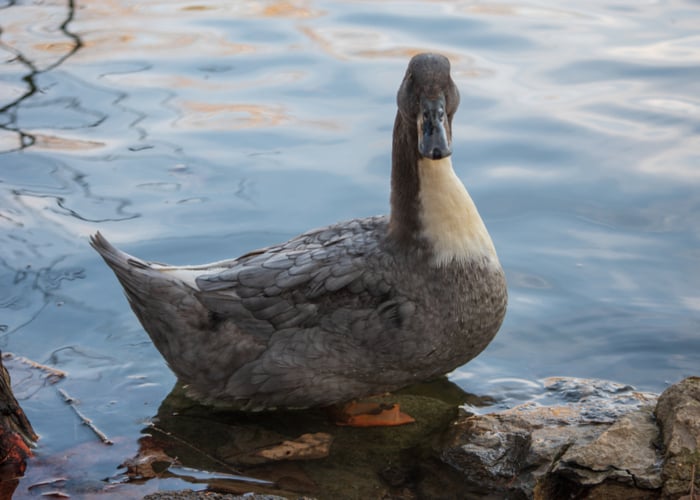 Blue Swedish ducks are calm and friendly, making them a suitable candidate for a family pet. These birds are also excellent foragers that produce tasty and succulent meat and beautifully-colored eggs.

Furthermore, they can’t fly so it’s easy to contain them inside your space.

But their loud quack can also be annoying at times and they’ll struggle to escape a predator since they can’t fly.

So, before purchasing a Swedish duck, you need to weigh in if it’s worth the investment and will blend with your flock.

If you need a more prolific duck egg layer with a unique and striking appearance, check out his next breed below.