Can Ducks Eat Onions? – The Good and The Risks 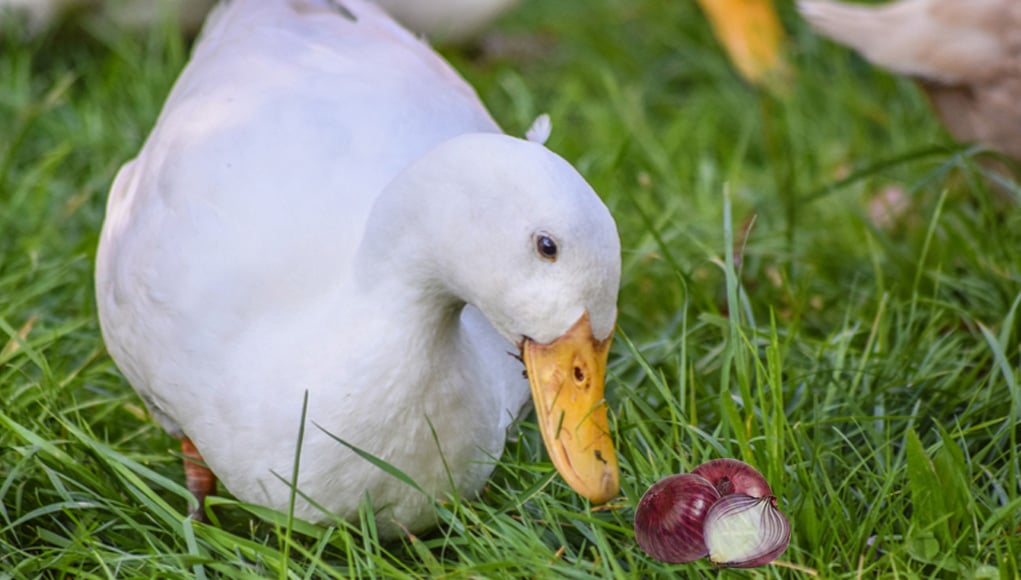 So you have a few leftovers and you want to give them to your hungry ducks, but the problem is it’s loaded with onion. Can ducks eat onions? Is it safe for them?

In this article, we’ll discuss:

Even if ducks are not picky with food, you need to ensure you’re giving them healthy and nutritious food and snacks to make them thrive and be productive.

So, if you want to know the answer to the question “can ducks have onions?”, let’s dive right in!

Onions contain thiosulfate, a compound that is toxic to ducks and they lack the enzymes that help digest this compound.

So if these birds keep on eating onions, undigested thiosulfate will build up over time and interfere with their blood and cause hemoglobin to form clumps.

Additionally, these clumps have the potential to burst their red blood cells, which carry hemoglobin.

Your ducks’ red blood cell count will therefore consequently plummet, making it much harder for them to transfer oxygen throughout their bodies. 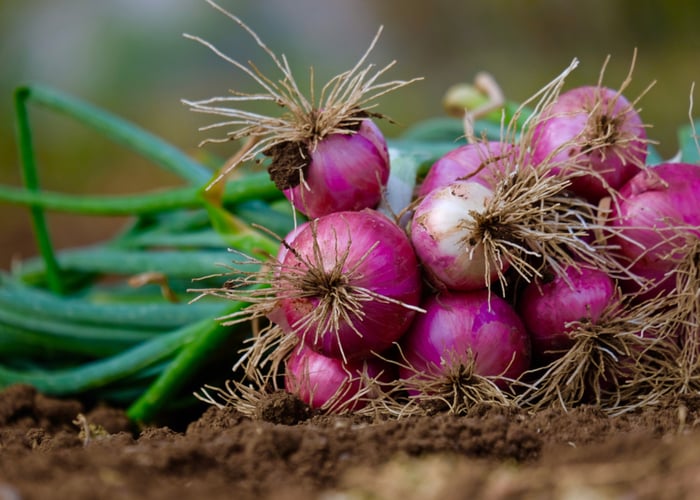 Are Onions Bad For Ducks?

Overconsumption of onions may lead to stomach pain, diarrhea, and vomiting.

And as mentioned earlier, thiosulphate can also damage the duck’s red blood cells which leads to anemia and respiratory diseases, and eventually, death.

It can also lower blood sugar levels, making them more susceptible to predation and other duck diseases.

It can also damage a duck’s liver and kidneys and lead to organ failure in the long run.

Onions can also give the duck eggs an onion-ish flavor. Thus, it shouldn’t be part of a duck’s regular diet.

But how will you know if your duck experiences thiosulphate poisoning?

Symptoms of Thiosulphate Poisoning in Ducks

These are the signs of thiosulphate poisoning that you should look out for if your duck has ingested onion:

These symptoms may also be accompanied by excessive swallowing, with visible droplets appearing from the nostrils which may indicate dehydration caused by stomach acid.

What to Do if Your Duck Has Eaten Onions

Onion ingestion in large quantities can be fatal, so it’s best to call your vet if your duck has eaten loads of onions.

Consuming a small number of onions may not kill them right away. It can still be treated if caught early. But it can build up over time and cause negative long-term effects on their health.

If your duck got poisoned with onions, you must bring it to your vet as soon as possible.

How to Prevent Your Duck From Eating Onions

Whether you’re keeping ducks as pets or for homesteading or farming, it’s best not to feed your pet ducks leftover foods with onions.

Keep your stock of onions out of their sight and out of reach by storing these on your high cabinets or in a room your ducks can’t access.

It can also be helpful to cut the onion into small pieces rather than whole slices to make the food less appealing. This way, it’d be easier for your pet duck to resist.

And if you’re planting onions in your backyard, it’s best to put up a fence to ensure your ducks can’t get access to it and gorge on it.

Ducklings should never be fed with onions whether cooked, raw, or in powder because it can only predispose them to digestive problems, anemia, and death.

They need a strict starter feed diet that provides balanced nutrition to develop their immunity and maturity.

The answer may vary depending on each duck’s taste and preferences since others may abhor onions. But others may love it as much as they love other vegetables.

But since onion is risky for their health, it’d be better to avoid it and use safe and healthy veggies like lettuce, kai and broccoli instead.

Do Ducks Die From Eating Onions?

Onions are toxic and can definitely kill them when eaten in large quantities. It may take some time to see the effect but the toxins will have a negative impact on your duck later on.

Ducklings are more likely to die when they ingest onions because they have a weaker immune system and will struggle to digest the compound.

Green onions are also toxic to ducks even if they’re milder than other onions. So, it’s best not to feed these to your poultry birds. How about the ducklings?

Can baby ducks eat green onions? The direct answer is no. Just like adult ducks, they shouldn’t eat these plants.

Since green onions are used frequently in human cooking, you need to look out when giving your duck some leftover food because it may contain this veggie.

Spring onions arguably have a milder and tastier flavor compared to ordinary onions. However, they’re still not safe for ducks’ consumption whether cooked or raw since they belong to the same family as other onions and contain traces of thiosulphate.

Therefore, they can still cause stomach upsets, diarrhea, and vomiting.

They’re more dangerous for ducklings since they have a weaker immune system and are at higher risk of dying from toxins in spring onions. So, if you’re raising ducklings, it’s best to avoid feeding them with onions. 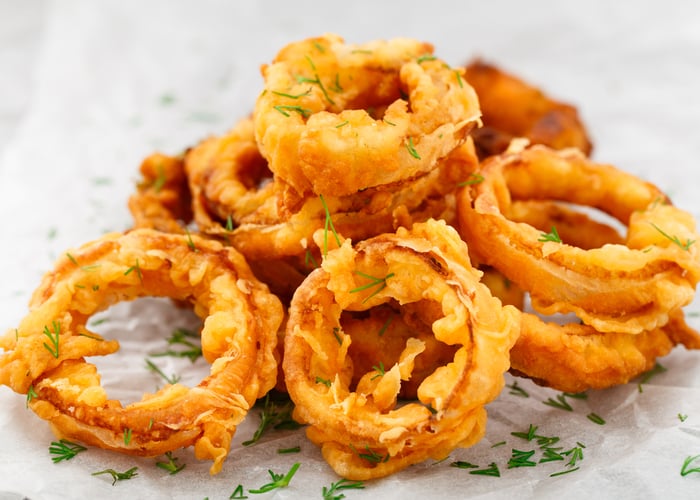 Feeding your ducks with many onion rings can lead to anemia, stomach pains, and diarrhea, especially if they have added spices.

Other Foods That Are Toxic to Ducks

Aside from onions, here are other foods we enjoy that are toxic or harmful to ducks and have adverse effects on their health.

Ducks at parks are usually fed by park-goers with bread but this common practice must stop since bread has no nutritional value.

And in worse cases, it can cause deformities and get stuck in the duck’s crop. Furthermore, a diet high in carbs can cause excessive pooping.

You should also avoid feeding your ducks chocolate at all costs because it contains theobromine and caffeine which cause vomiting, diarrhea, hyperactivity, increased heart rate, tremors, seizures, and death.

It only takes 24 after eating chocolate for ducks to succumb to death.

Like the previous sweet treat, grapes also contain cyanide compounds that can kill a duck in just a few bites.

You also need to guard your ducks and prevent them from eating any raw meat to keep them safe from salmonella and other harmful bacteria.

The seeds of apples and pears and the pits of cherries, plums, peaches, and apricots contain some cardiac-toxic cyanide compound which is fatal to ducks. You can still feed your ducks with these fruits though but remove the seeds and pits first.

Rhubarb and its stem and leaves

Ducks instinctively avoid the rhubarb plant and their leaves because it contains oxalic acid which alters their digestive system. It also prevents them from absorbing calcium which results in egg binding.

It’s a close relative of onions and contains thiosulfate so you also need to avoid feeding your ducks with garlic. Just like onions, they affect the taste of the ducks’ eggs and may irritate the waterfowl’s mouths and lead to ulcers.

Potatoes can also harm birds and waterfowl due to the presence of alkaloid solanine. It induces drowsiness, paralysis, and death, and solanine doesn’t disappear after cooking. So, it’s best to avoid it.

It is part of the nightshade family, so just like rhubarb, white potato, and tomatoes, it contains toxins that are harmful to ducks’ health.

Keep your bean plants from your ducks whether it’s raw or dried because it contains phytohaemagglutinin which is also fatal to birds.

Caffeine can increase heart rate and cause arrhythmias, hyperactivity, and cardiac arrest in birds. So make sure your waterfowls can’t get access to your favorite coffee and drinks.

Any product that contains mold is also toxic to ducks since molds can harm their gut and health. Avoid processed and greasy foods as well because they’re not healthy for ducks and will only lead to weight gain and heart problems.

Even salt and salty foods are not good for ducks because it alters their electrolyte and fluid balance and causes excessively wet feces, thirst, dehydration, and kidney failure. It can also cause eg deformities over time.

Then what should you feed to your ducks? 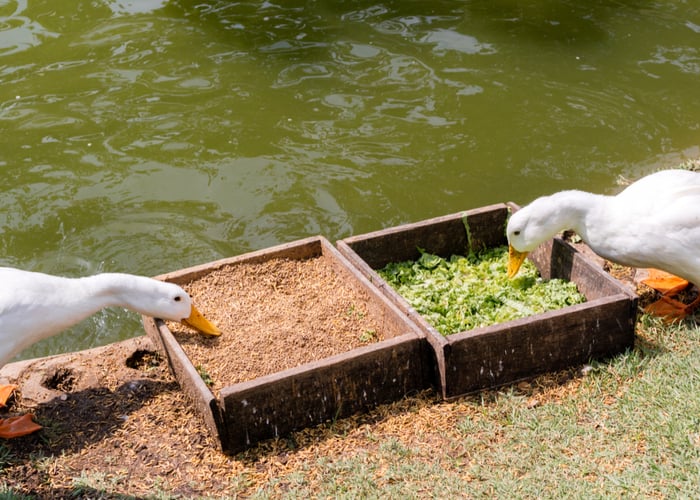 What Can Ducks Eat?

Ducks are omnivores. Therefore, they can feed on plants, grains, mollusks, and insects. Here are some of the safe food for ducks that you can use if a pelleted feed isn’t available.

Ducks love to feed on corn and it’s rich in nutrients making it ideal for them. You can give them whole corns but most duck owners suggest using cracked ones since they’re easier to digest.

Your waterfowls enjoy eating sweet corn as well whether it’s tinned, frozen, or fresh. But make sure to defrost it first before feeding them.

Oats whether uncooked, rolled, or quick is also a healthy snack for ducks. You can also give them small pieces of flapjack as long as there isn’t much sugar in it.

Ducks also love to munch on rice. It doesn’t matter if it’s plain white or brown, cooked or uncooked, whole or instant as long as it’s not spoilt.

Bird seeds are packed with vitamins and minerals so it’s nutritious for ducks. If you have a bird feeder in your backyard, don’t be surprised if they feast on the leftovers of birds. They love it.

Peas are another healthy option for ducks. Just defrost it first and it’s good to go.

We also compiled other common questions related to duck eating onions and other foods that are potentially toxic to them.

Are onions good for ducks?

Onions and other vegetables from the Allium family, including garlic, are toxic to ducks because it contains thiosulfate.

They can’t digest this compound and it leads to various health issues such as stomach pain, vomiting, diarrhea, and in worse cases, organ failure and death.

What should you not feed ducks?

Aside from onions and garlic, you shouldn’t feed ducks with bread and junk food too because they have no nutritional value.

Can chickens and ducks have onions?

Although a little bit of onion won’t kill them right away, the thiosulfate toxin can build up over time on the chicken and duck’s bodies and gradually cause health issues.

So, it’s best to avoid feeding your ducks foods that contain onions and garlic, even the leftover ones.

Can geese and ducks eat onions?

Onions, along with other members of the Allium family, including garlic are harmful to ducks because of the presence of thiosulfate in them.

Can ducks have tomatoes?

Ripe and red tomatoes are safe for duck consumption including other varieties like grape and cherry tomatoes.

However, the stem and leaves are highly toxic. Unripe tomatoes are poisonous to them because of the presence of an alkaloid called tomatine. 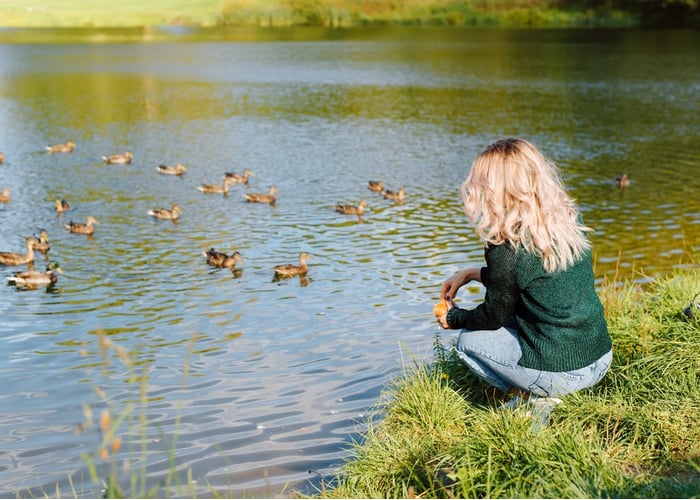 So the answer to the question “can ducks eat onions?” is clear. We do not recommend feeding ducks with onions even in small amounts since they can build up and cause ruptured blood cells, anemia, organ failure, and death.

It’s best to avoid feeding your ducks with leftover foods that contain onion and garlic as well to avoid thiosulfate poisoning.

Since it can cause a range of health problems, you need to ensure they can’t get access to onions in your home and backyard garden.

If you want your duck to be productive and live a longer life, choose healthy and safe vegetables such as kale, cabbage, and broccoli.

Check out the article below to discover more tips about duck feeding and how to raise ducks as a beginner.