The Pros and Cons of Getting a Second Bird

Are you struggling to give enough socialization time to your feathery companion or did your bird’s previous cagemate pass away? These are the common reasons why some avian owners consider getting a second bird.

But is adding a new bird that can be your old avian’s friend the best solution to these problems?

If you’re in a dilemma and a state of confusion, you came to the right place!

In this guide, we’ll discuss the:

If you’re experiencing Multiple Bird Syndrome(MBS), you may feel the need to add more and more birds into your flock because it gives you joy.

However, this decision should not be taken lightly. You need to weigh the advantages and disadvantages as carefully as adding another child to the family.

So, before purchasing another bird, consider these bird-keeping aspects.

Pros of Getting a Second Bird

Some bird species prefer living alone. But giving your first avian pet a fellow avian companion has several benefits, including the following:

Getting a second bird that can be your resident avian’s friend is beneficial since not all owners can provide enough socialization time to their pets.

These creatures are highly social. So, they need lots of time to interact with their flock which in the captive bird’s case includes you.

But birds aren’t humans and we have different behavior and motivation from them. They can communicate with each other better and gain the attention their owners can’t provide.

Helps you understand their behavior

Bird owners can learn a thing or two from observing birds’ interactions. It can also help you deal with them better and understand their seemingly odd personalities.

Cons of Getting a Second Bird

On the other end, here are the downsides of adding a second bird to your home and how it may affect your first pet and your relationship.

They may fight each other

Some birds are innately aggressive and won’t welcome a new flock member. Thus, getting a second bird and housing him with the old one isn’t a good idea if your bird tends to be territorial and aggressive. They might just kill each other.

Your attention will be divided

If you can’t provide for the bird’s social needs, then how much more if you’ll add a second bird to the cage?

You’ll only have less time for each one of them and since they can or tend to be jealous, you may need to put the other in a cage while you cuddle with the other.

They may prioritize their new friend

If your birds get along with each other, there’s a high chance that your pet bird may choose his fellow avian creature over you and bond strongly with each other.

They may not pay attention to you anymore since they’ll be busy with their partner or friend.

It’s a given that if you’re going to add another bird to your current flock, there will be additional food and medical expenses.

Having more birds means more mess and destruction. So, if your problem is your pet destroying furniture, getting a second bird is not the solution. It’ll only bring more trouble to you and make them crave attention. 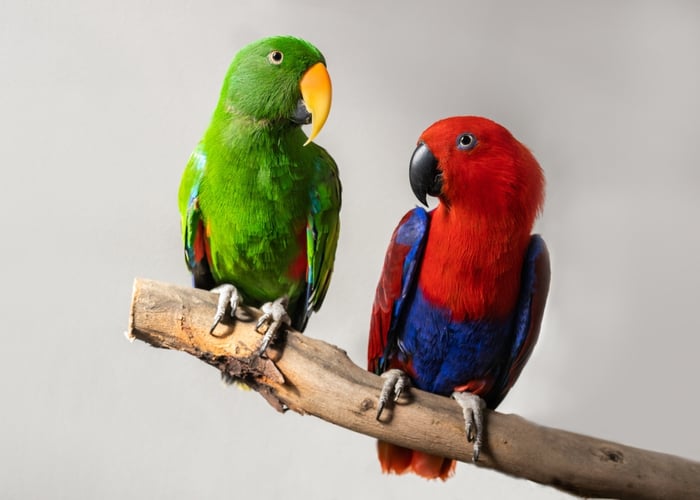 Should I Get My Bird a Friend?

The answer is subjective and it may vary depending on the reason why you want to add a second bird.

Most owners want to get a friend for their bird because they’re worried their pet may get lonely or bored especially when they don’t have enough time to socialize and interact with their avian pet.

Although small bird species like finches and budgerigars do enjoy the company of their own kind, many birds consider their humans as flockmates.

So, they don’t feel the need to interact with other avian creatures, more so if they used to be the only bird in the house for years.

If that’s the case for your bird, getting a second bird and introducing him to your resident avian can be challenging. Your old pet might not accept another member and become aggressive or territorial.

So, before purchasing another bird, try other ways to entertain your bird if your concern is socialization and loneliness or boredom.

You may add new mentally-stimulating toys or ask other members of the family to spend time interacting with your bird when you’re away.

It’ll work more than introducing another bird unless there’s an underlying medical reason for your bird’s boredom or depression.

If the resident bird is still unhappy after giving him toys and activities that can make him occupied, then you may try introducing a flockmate. But know that it will take a long time before he’ll accept the new bird and you must be patient during the whole process.

Sometimes it takes weeks to months depending on your pet’s behavior.

Even if you intend to add a bird that will serve as a friend to your old avian pet, it may backfire if the resident one is aggressive and unwelcoming.

But if your problem is having a destructive parrot, adding a second bird will only make things worse. The answer to that is proper training, setting boundaries, and adding more exciting toys that they’re allowed to destroy.

Where to Get a Second Bird

If you’re looking for a second bird, you surely know that you can purchase one from rescue facilities, shelters, pet stores, and local breeders. But there are many unwanted birds that need to find a new home so adopting a bird is also a good idea.

You can find birds that are up for adoption in these organizations:

The downside however is most of the birds in these rescue organizations are adults. And it would be more challenging to introduce a new adult bird to your resident bird if it has experienced abuse from its past home.

When Should I Get Another Bird?

It’s best to get another bird when you’re already knowledgeable in handling their undesirable behaviors and have enough time to interact with them.

And if you’ve already experienced raising two birds together in the past but the other one passed away, don’t rush in bringing a new one.

You may be worried about your bird falling victim to depression when it has lost its flockmate, but not all birds will accept new mates. 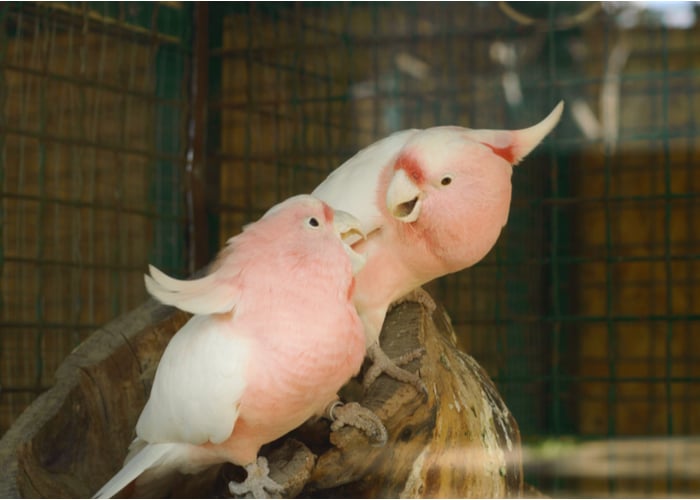 How Do You Introduce a New Bird to Another?

Some species like budgies are welcoming but others claim their cage as their territory, especially if it used to be a breeding area. In this case, you need to put them in separate cages but allow them to see each other and have supervised playtime.

Here are some tips to keep in mind when introducing birds to each other to avoid problems:

1. Set your new bird’s cage up

Prepare the cage before bringing home the new bird in another room but make sure your first bird can still see it. Then, put some toys and food and water dishes in it.

But don’t let your first bird play in it because it might take ownership of the cage.

Before introducing the birds to each other, quarantine the new one to keep your current bird safe from contagious diseases and let them get used to each other first.

Ideally, quarantine him on a separate room, floor, or air system. You can utilize a dog crate for this process if you have no extra cage.

3. Put them in the same room

After the quarantine period, you can now put your new bird into his own cage. Then, move its cage to the room where your old bird resides and let them observe each other from a distance for a few days.

Birds are emotionally complex creatures. So, to avoid jealousy, use the “first” rule all the time when feeding and interacting with your birds. For example, greet him first every morning, feed him first in every meal and take him out of a bird cage first.

Don’t worry about the second bird because it’ll understand its position in the flock.

The only exception to this is during nighttime. Give your first bird a special goodnight before turning off the lights so it’ll feel like he’s the most important and no jealous thoughts will linger on his mind.

5. Bring your first bird to the second

If you want to introduce them physically to each other without any barrier, bring the first bird to the second. This way, your old bird won’t feel like someone is invading his territory.

Bring his cage next to the newbie and observe the birds’ body language.

6. Bribe them with foods

One of the best ways to create positive interaction is by offering your bird some snacks and treats while they’re together.

Just keep them in their own cages in this phase to avoid fights and injuries.

When you feel like your birds are ready, let them have playtime in the same room out of their cages. You may also use trick training to get positive reinforcement and build stronger companionship.

If your first bird isn’t friendly with the newbie despite all your efforts, you may need to put them in separate rooms.

Frequently Asked Questions About Getting a Second Bird

Do birds need a companion?

Most bird species enjoy having companions of the same kind but introducing a new bird can be tricky.

If not done the right way, it can lead to stress, health problems, aggression, fights, and injuries. So, you need to take it slow when introducing birds to one another.

Should I get my bird a mate?

Having a mate is essential for the female birds to lay. So if you want to breed your bird, you may need to add another one to a cage with females. But separating them will turn off the female’s hormones.

Is it better to have 2 birds or one?

Your bird will be less lonely if it has a friend because he’d have someone he can socialize with.

However, if you want a pet bird you can bond with, it’d b best to raise just one because avian creatures often choose their own kind over their humans.

How do you know if birds like each other?

If your birds are happily eating together, both active and not showing signs of distress like inactivity or squawking, then they like each other.

But if they squawk angrily and bite each other, then may need to separate them.

Getting a Second Bird: Our Final Thoughts

First or older birds can be sensitive. So, before getting a second bird, notice how it interacts with you and other animals.

If your old pet bird has been the only avian creature in your home for the longest time, you need to ensure he won’t feel like he’s being replaced.

Give him special attention but you also need to interact with the new bird in his presence. This way, the newbie will realize that being around his senior bring lots of good treats and interactions.

But remember that some birds are not into sharing environments and more birds mean more mess and higher food and medical expenses.

However, if you can afford it and have enough time for taking care of and training them, getting a second bird can be fun and fulfilling too!

READ NEXT: How to Discipline a Bird—A Comprehensive Guide for Bird Owners