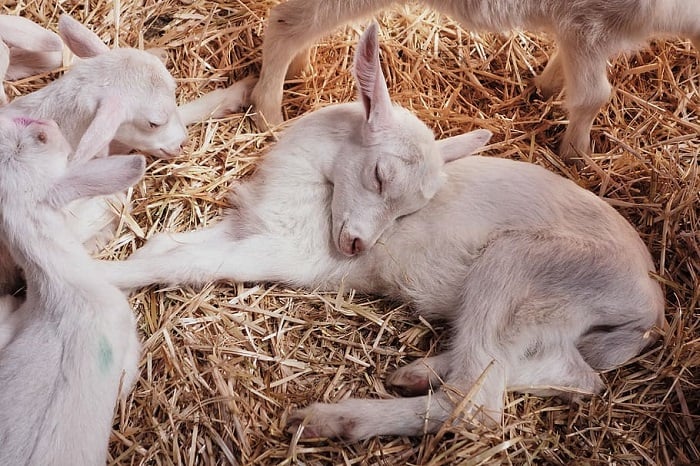 Keeping your goat herd healthy requires sanity husbandry efforts and diligence. Following proper worming and hoof trimming recommendations is a great start, but only a start, at the practices and routines you must follow to both prevent and detect the first signs of goat disease and illness that can wipe out your herd.
A veterinarian will need to be consulted for many major goat diseases, illnesses, and injuries but many issues you can learn to both quickly detect and treat yourself.
Agriculture supply stores sell nearly all of the vaccinations and related supplies you will need to offer injections on an annual or as needed basis to your goats. Giving a goat a shot might not sound like an enticing proposition, but it might not be as difficult as you think.

Getting a livestock vet to your homestead or your goat to an office may not always be possible. In some situations, immediate care must be taken to prevent the loss of an animal. You will be the first responder for your goat herd and the rest of the barnyard animals. If you are unable or unwilling to administer emergency first aid to your goats, keeping them could lead to tragedy when disease or injury occurs.

Goats should be wormed roughly six times per year. A pregnant or nursing nanny goat is not typically wormed unless she develops an infestation that must immediately be dealt with to prevent serious harm to the animal.
Goat wormer is sold over the counter at agricultural supply stores in both liquid and pellet form. The flavored pellets are typically a hit with the goats, they do not mind taking them at all.
Hoof care must also be a part of the goat herd health care routine. If hooves are allowed to grow too long they can become deformed and make it difficult for the goat to walk. A goat with deformed hooves can develop muscle and tendon strain or become lame. A hoof that is not properly trimmed can also snag on fencing and natural items in the goat’s habit and cause damage to both the hoof and the leg.
A farrier or veterinarian can trim goat hooves about every six weeks for you, but using the inexpensive manual tools required and doing the trimming yourself is not generally a difficult task for homesteaders who are willing to invest a little time to learn the process.
Inspecting the hooves regularly as part of the routine trimming cycle also allows goat keepers to quickly detect any abscesses, rot, or other hoof issues that can lead to more serious and potentially deadly medical problems. 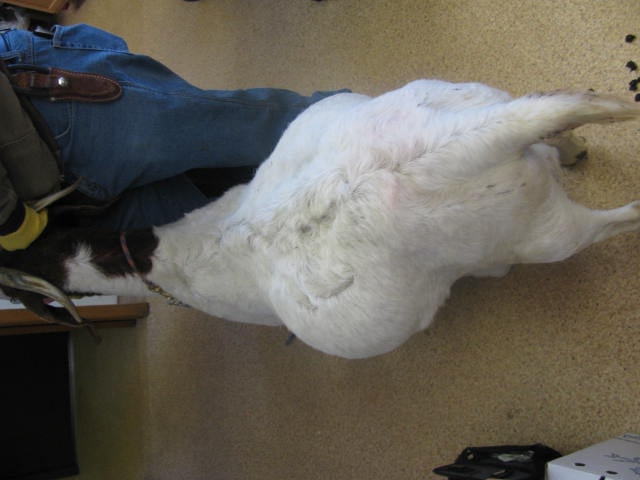 Goats are a specific type of animal known as ruminants. Other wild animals and livestock in this same classification include sheep, cattle, deer, and elk. Although some people falsely believe that cattle and other ruminants have four stomachs. Ruminants actually have four stomach chambers. When all four chambers are working as they should, based upon a proper diet and overall health, all is well for the goat and its ruminant peers.
But, when the ruminant gets out of whack due to poor diet, disease, or injury, the goat can become incredibly ill quickly. Goat bloat is often the first sign that something is wrong with the ruminant.
When a goat’s sides swell up as tight as a drum and make the animal look like a lop-sized balloon, it has bloat due to a ruminant related problem. The gas bubble that swelled inside of the goat can cause it to become lethargic, stop eating and drinking, and make it unable to walk. Bloat can and often does, turn deadly if not treated promptly and the underlying causes of these conditions not figured out and rectified.
Using a drenching solution, either one purchased from a vet, agricultural store, or a natural homemade version, is the most common way to alleviate bloat. The drenching must be done properly to ensure the animal is swallowing the mixture to avoid the liquid from traveling into the lungs instead of the stomach – and killing the goat.
The most common cause of bloat involves the goat eating too much sweet grain or treats (especially bread, which goats love) and not enough roughage.
Coccidia
Goats can harbor multiple species of the coccidia bacteria and not show any outward signs of being afflicted with coccidiosis. Because the bacteria is released via a goat’s droppings, other goats – especially kids, that come into contact with the matter can develop this serious illness as well.
The infection caused by coccidia is often the primary cause of kid deaths – and the little baby goats rarely even show signs of having the coccidiosis disease. Symptoms of coccidiosis include fatigue and frailness, failure to thrive, scours (diarrhea) and pasty feces.

The coccidia protozoa causes damage in the goat’s intestinal track preventing feed from being properly absorbed. A vet is usually needed to attempt to treat this condition after quarantining infected animals and thoroughly cleaning and disinfecting the entire pen – or temporarily relocating the herd.

This condition, also known as “lockjaw” is often fatal in goats and other ruminants. Tetanus can be prevented via vaccination. The deadly goat disease is caused by the Clostridium tetani bacteria.
Symptoms for Tetanus include: muscle spasms. Stiff muscles, bloat, loss of interest or inability to eat or drink, difficulty walking and general coordination problems. Once a goat contract tetanus and shows signs of symptoms it typically dies within four days. There is no way to avoid death once tetanus is contracted, making the humane choice to put the animal down is often necessary to avoid several days of needless suffering.
The CDT vaccine can help prevent goats from getting Tetanus, Clostridial Disease, and Enteroteximia. Doelings and nanny goats should be vaccinated four weeks prior to their tracked and anticipated kidding date.
Once kids are six to eight weeks old they tool should receive the CDT vaccination. This initial vaccination should be followed by a booster shot four weeks later. You can purchase this vaccine from a vet or likely at a slightly lower cost from an agricultural supply store like Tractor Supply or Rural King.
Pneumonia
Goats can contract pneumonia just like humans – from bacterial, viral, and environmental sources. Symptoms a goat will likely exhibit when it has contracted pneumonia include: fever, loss of appetite, respiratory distress, and chronic coughing.
Prescription antibiotics, as well as anti-inflammatory medications or remedies, are almost always needed to save a goat that has contracted pneumonia. If left untreated, the goat will most likely die of pneumonia.

When a goat as afflicted with the Corynebacterium pseudotuberculosis bacteria both external and internal abscesses can develop. There is both not treatment or cure for CL.
A veterinarian can drain and clean the abscesses but that does not mean the growths can appear again … and again. Draining the abscesses is a tricky process because any debris from the process squirts onto the goat fur or horns or in a common area and another herd member comes into contact with it, that animals too can contract this contagious goat diseases.
The two safest routes for dealing with CL is to either quarantine the infected goat away from the herd both before and after treatment of cull the goat.
Anemia
This sickness occurs when goats and other ruminant animals experience a drop in their red blood cell count. Typically, an infestation by parasites causes anemia.
Sings of a goat afflicted with anemia include fatigue, pale eyelids and gums, anorexia, and scours. Proper worming and cleaning of the pen, shelter, waterer, and feeder can help prevent anemia from developing.
Providing the goat herd with both protein blocks and mineral blocks can also help prevent and treat anemia symptoms. Make sure the goats are getting enough roughage in their daily diet to deter the development of anemia, as well.
Scrapie
This ruminant animal disease is always fatal. Scrapie impacts the central nervous system incredibly slowly. In some cases, it takes years for the transmissible spongiform encephalopathies(TSE) disease to develop to the point of showing symptoms.
This deadly disease can be transferred from an infected mother to a baby animal during the birthing process. You can pay to have a veterinarian do a blood test on your breeding goats to test them for scrapie resistance.
If you are breeding goats (or sheep) to sell as part of your homesteading or farm commercial operation, it is highly advisable to have them tested and enroll them in the voluntary scrapie certification program. The designation permits your herd to be deemed scrapie free for five years – a good selling point with prospective buyers – but annual examinations by a veterinarian are required to participate in the program. Being involved in the program can also limit the introduction of some new animals onto your property. 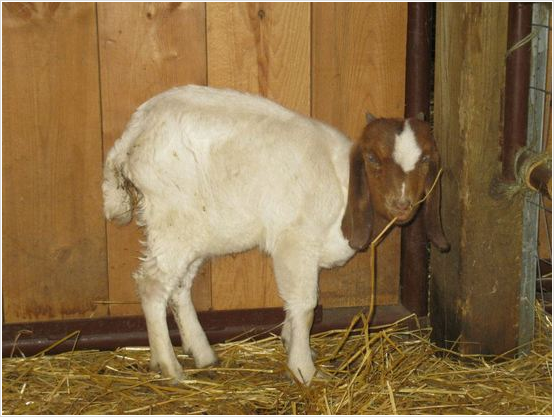 This is often referred to as the “overeating disease” in ruminant livestock. This often develops not long after birth as the newborns nurse from their mothers and start eating grain and browsing for food on their own. The Clostridium perfringens bacteria prompts this goat disease.
Symptoms of Enterotoxemia include” colic, intense indigestion, convulsions – and sometimes just sudden death. To prevent his goat disease engaged in recommended husbandry and immunizations habits.
Most goat diseases, sickness, and injuries can be prevented when proper husbandry techniques are diligently followed and the goat herd is regularly inspected for problem signs. I highly recommend engaging in just a quick few minutes check of each goat as part of the daily feed and turnout routine. Taking a little time each day to check on the goats and record any signs of trouble, as well as documenting growths and hoof issues with photos can prevent the loss of a single animal or the entire herd to a serious or contagious illness.
All You Need To Know About Goat Breeding
Ultimate Goat Feeding Guide

One thought on “Goat Diseases And Sickness”