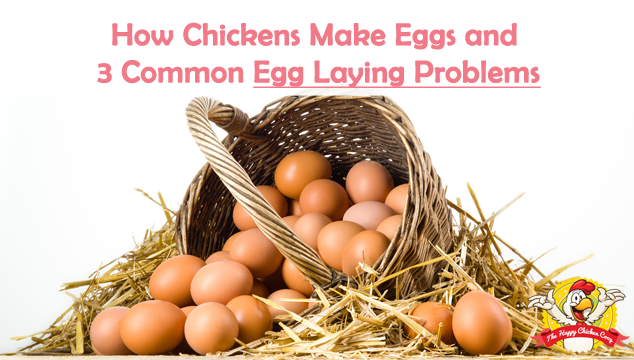 An egg contains a phenomenal amount of nutrition for its size, but you already knew that right?

An average egg contains a mere 75 calories but gives you 7g protein, 5g fat, and 1.5g of saturated fat.

In addition, it gives you vitamins A, D, B12, riboflavin, pantothenic acid, phosphorus, choline, carotenoids and cholesterol!

And as reported by Pennsylvania State University if you eat only pasture-raised chicken eggs instead of generic supermarket eggs, you get even more health benefits- making it truly a superfood.

We’ve previously talked about why your hen has stopped laying and also the best chicken breeds for lots of eggs, but we haven’t discussed where does this incredible food come from?

To just say it comes from a chicken doesn’t do justice as to how complex the process is.

After reading this article today you will realize what a small miracle that egg really is.

The Reproductive System of the Hen

A hen is born with two ovaries.

Although after a chick has hatched their right ovary shrinks, becoming non-functioning, so all the egg laying activity is located in their left ovary.

Interestingly, all the eggs a hen will ever lay are stored in their ovary at birth.

The egg machinery (i.e. oviduct) of the hen is about 25-27 inches long. It really looks like a stretched out trumpet. Let’s take a look at each part of the oviduct and how it works together to produce an egg.

It all starts in the Follicle; a mature yolk is released from the follicle into the infundibulum. The follicle contains all of the yolks a hen will ever lay in her life; she likely will not use all of them. The release of the yolk stimulates hormonal responses throughout the system.

The yolk spends about fifteen minutes in the infundibulum, where it is gently ‘massaged’ and stretched out. If fertilization is going to occur, it happens here.

Once the yolk leaves the Infundibulum, it passes through to the Magnum. This is the largest part of the reproductive system, where approximately 50% of the thick, white albumin is attached. The yolk remains here for about three hours before moving on.

After the yolk has passed through the Magnum, it reaches the Isthmus. The shape of the egg is determined here and the inner and outer shell membranes are attached.

Once the shape has formed the egg passes through to the Uterus (shell gland).

Here the egg shell is made.

The shell is largely made from calcium carbonate.

The hen pulls roughly half the calcium from her body and the other half is obtained from her diet. If there is any pigment to be added to the egg, this is where it happens.

The egg remains in the uterus for around twenty hours.

This is commonly an area where things go awry in the hens’ ability to maintain a good production egg.

Not really important to formation, the vagina is all important in getting the egg laid properly.

The ‘bloom’ of the egg is laid down here, and the egg is turned in a process called ‘oviposition’. The egg enters the vagina narrow end first, but is laid ‘blunt’ end first.

Occasionally, an egg will get ‘stuck’ while turning around- this is called egg bound.

The hen can sometimes expel them herself, but on occasion may need assistance from her keeper.

‘Sperm pockets’ are located in the walls of the vagina. During fertilization, some sperm is released and travels up to the infundibulum for the process to begin. Bird sperm remains viable at body temperature for 10-14 days.

Finally the egg reaches the Cloaca which is the Thruway exit!

The entire process takes around 25-27 hours, so you average hen will lay slightly less than an egg a day- this is an average of around 270 eggs per year for a hen in their first year of lay!

Once an egg has been laid, within thirty or so minutes another will start on its own journey.

It is rare for a hen to start ovulation after 3pm, so once every 6-7 days she will miss a day of production.

The Anatomy of the Egg

The egg consists of many separate pieces, all nicely packaged up to give you breakfast!

A malfunction in the uterus causes this.

It may simply be that the pullets’ reproductive equipment is too immature yet and requires a slightly longer development time. Or it could be that the hen is aging or it’s simply a genetic ‘oops’.

I have one thirty month old hen who consistently lays ‘shell troubled’ eggs. The pictures below show a parchment shell removed from the vent and an irregular coating of shell.

She fairly frequently lays no shells and sometimes a perfect egg!

Although she is currently well, she is in danger of egg yolk peritonitis from one of these episodes.

This occurs when fluid from the oviduct leaks into the abdominal cavity and starts an infection.

The yolk is a superb place for E. coli bacteria (from the gut) to grow in and the hen will get sick quickly and often dies almost before you notice she is sick.

Unfortunately, many diagnoses of egg yolk peritonitis are made at autopsy.

There are rubber or soft-shelled eggs, and then there’s something called a lash egg. If you come across one of these, your stomach will surely turn.

A lash egg is not entirely all egg…it’s shaped like one and has some egg components, but that’s about it.

In general, it looks like a gob of goo in the shape of an egg. And that’s because it travels the same route as an egg would.

But again, it may only have pieces of shells and yolks, because the majority is made of up puss from an infection in the hen’s oviduct.

Unfortunately, when a lash egg emerges, it is usually already too late for the hen. She has most likely been dealing with the infection for months and may not live for much longer. If she does make it through the infection, she may never lay eggs again.

With that being said, if you act quickly, you can treat the hen with antibiotics and she may be able to turn the corner.

Normally, when the egg travels into the vagina it turns itself around so that it is laid blunt end first.

Sometimes if it is too large, it will get stuck, causing the hen to be ‘egg bound’.

If this happens the egg needs removing or you hen can become very ill.

A warm water bath and some gentle massage of the abdomen can help. You can also lubricate the vent with some

Vaseline to assist in the passage of the egg.

If the process goes well you should end up with some beautiful eggs, like these! 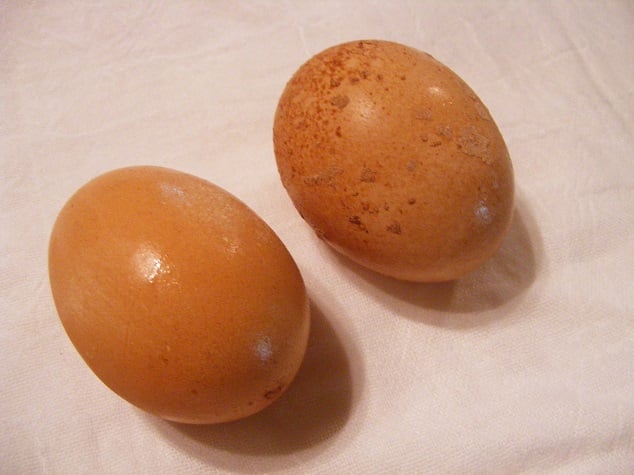 So there you have- the miracle of the egg.

A little power house of nutrition carefully packaged by the hen.

Did you know that eggs were so complex!?