What To Feed Goats: Goat Feeding Diet on a Farm, In the Wild and During Winter 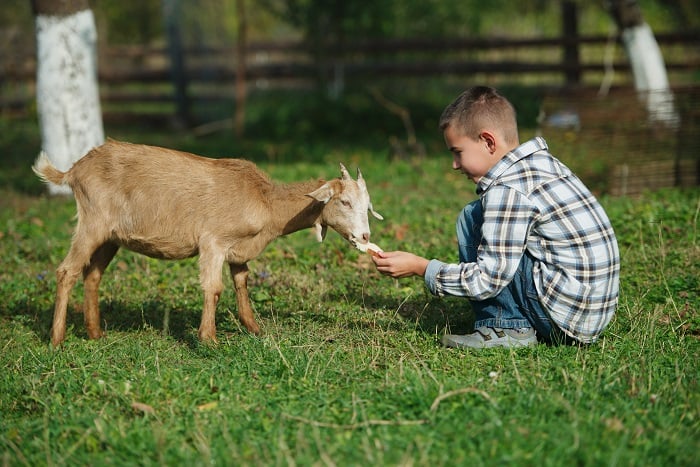 Goats are ruminant animals and must eat the proper ratio of roughage each day to avoid bloat – which can be a death sentence if not treated both properly and promptly. So your question may be, “What to feed goats?”

Well, today we will uncover the answers along with some direction depending on what the purpose of your goats are.

A basic healthy goat feeding plan must include a solid hay base with limited grain feed rations and only safe treats given in small amounts.

When a goat does not eat a proper diet, too much of an approved dietary item, or experiences a rapid dietary switch, the rumen does not function properly and can cause bloat and other digestive tract problems.

We will also discuss what goats like to eat, what they eat on a farm vs the wild, what to feed goats in the winter, and safe treats you can feed them.

What to Feed Goats On a Farm? A Goat Feeding Guide

Unlike horses and cattle, goats do not graze for their food – they browse. A goat will eat grass that grows on the ground but are naturally conditioned to eat twigs, tall brush, leaves, brambles, and other types of foliage that grow in the woods.

Even during cold weather months, a goat can browse for a significant portion of their diet providing they have enough room to roam on a homestead that is at least partially wooded.

Hay: How Much and Types

On average, a goat consumed between two to four pounds of hay each day. This amount fluctuates based on the age of the goats, if the goat is pregnant or nursing, and slightly to take into account goat size – standard or miniature.

A goat can eat any type of agriculturally produced hay, but the quality of a hay variety depends upon the nutrients of which it is comprised. The best type of hay for one type of livestock may not best fulfill the dietary needs of another livestock breed.

A goat’s dietary needs are best fulfilled by eating a legume style of hay. This variety of hay is most often comprised of clover, alfalfa, vetch, and soybeans. Goats have a far smaller mouth than horses or cattle, and even sheep if you are keeping miniature breeds.

Because of this size difference, the texture or legume hay is far easier for goats to chew than other more coarse varieties of hay.

Nursing nanny goats, as well as goat kids, should especially be fed on a diet legume hay due to its nutritional properties.

More mature goats are best served by a mixture of easy-to-digest orchard grass and legume-style hay.

Now I typically use just hay and grains for my goats, but I have heard great results from goat keepers about using Chaffhaye.

Chaffhaye has the word hay in it because it is hay, specifically alfalfa that was cut before peak harvest.

What sellers do next is interesting, they spray this batch of hay with molasses and add bacteria that is healthy for goats’ digestive tract.

The bacteria is called Bacillus Subtillis and it slowly ferments the hay which helps goats break down the hay easier when eaten.

This accomplishes two things for goat owners, it provides extra nutrients for the goat when they digest the hay, AND it promotes a healthy gut.

Goats are known to be fragile when it comes to their stomach. Once they are prone to digestion problems they don’t live long.

Grain is an excellent source of extra nutrition for your goat and it’s important to know the benefits of each. In fact, there are several types of grain you can feed your beloved goats:

Whole grains are exactly what they sound like, they are whole grains that have not been processed. I personally use whole grain because it helps my goats grow faster.

Texturized grains are similar to rolled grains. These grains are a great option because mills will add other grains to improve the nutrition of the feed.

Rolled grains are as just like whole grains only the grain has been rolled over so it looks flat, hence the name. This type of processing there is some speculation that you might lose a little nutrition per grain, but not much.

Pelleted grain is similar to commercial dog food. It’s probably the cheapest option but you risk your goat ingesting additives such as binding agents.

Dog food companies do something similar and use rice by-product, which are the ends of rice grains and don’t hold as much nutrition. However, big companies can say “oh there is brown rice in our recipe”.

Pelleted grains is the same thing, just grain by-products which are the ends/butts of grains so there isn’t much nutrition and they are bound together with binding agents.

If that is what you can afford, that is fine, I just wanted to educate you prior to purchasing.

Grain feed should only account for roughly 10 percent of a goat’s diet. While they love the taste of a sweet mix – especially if it contains molasses, eating too much is not good for their health or proper rumen function. Hay should be the primary base of a goat’s diet.

Some goat keepers offer a slightly higher percentage of grain feed to dairy goats due to a belief the added rations may increase the quantity of milk produced.

How Much Grain To Feed Pregnant Goats

Likewise, when a nanny goat is pregnant or nursing she too is often provided with additional grain feed to provide the extra calories and energy she needs to provide nutrients and plenty of milk for her kids.

Using a grain feed with a boosted molasses percentage is often recommended for pregnant and nursing nanny goats due to its high fat count and possible healing properties. 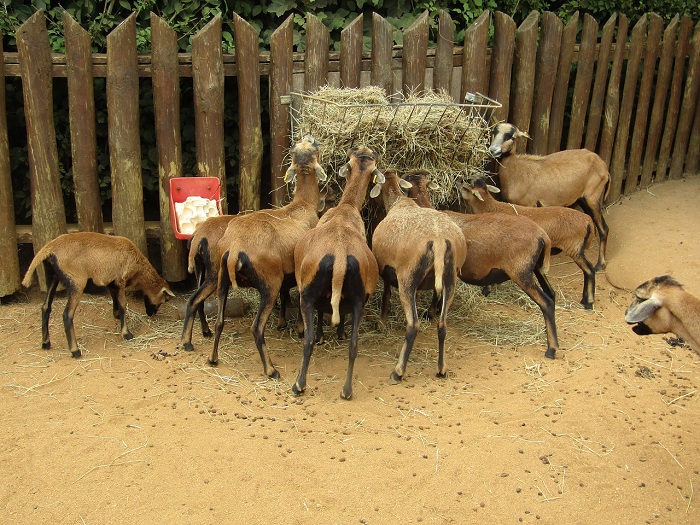 What Do Goats Eat For Treats?

Treats, even healthy ones, should only be provided in small to moderate amounts. Healthy goat treats are especially helpful when used as training aids to establish trust between keepers and the animals and to teach them their ranging boundaries.

Once a true level of trust or report is developed between the keepers and the goats the animals are more likely to come when called and be compliant when medical treatment, shearing, or milking is necessary.

So a lot of goat owners will feed their goat sweet feed as a little treat. Sweet feed is grains or pellets that has been mixed with molasses. Molasses not only adds iron and sugar to the treat, but as you can imagine makes the grain/pellets more desirable.

Similar to dog owners who feed their dogs table scraps, sweet feed has little to no nutritional value.

Every now and then I feed my goats sweet feed, but in moderation. As the saying goes, if you give a mouse a cookie, he’ll want some more.

I make sure they don’t get to the point where they prefer it over their normal diet.

Always introduce new foods or changes in amounts and brands slowly to avoid rumen upset. It is best to limit free-ranging in the early spring as new growth comes on by making sure the goats have eaten their fill of hay or a small typical grain ration before heading out in the pasture.

Goats will become gluttons when the first sweet clover appears and this should be avoided as much as possible.

Always keep natural homemade of commercially manufactured goat drench solution and supplies on hand so you can treat this condition yourself if necessary or are ready for a livestock vet to arrive.

Providing free-choice goat supplements to the goat herd will also help ensure they are getting the proper amount of nutrients on a daily basis as well as helping to prevent bloat and parasite infestations in the process. 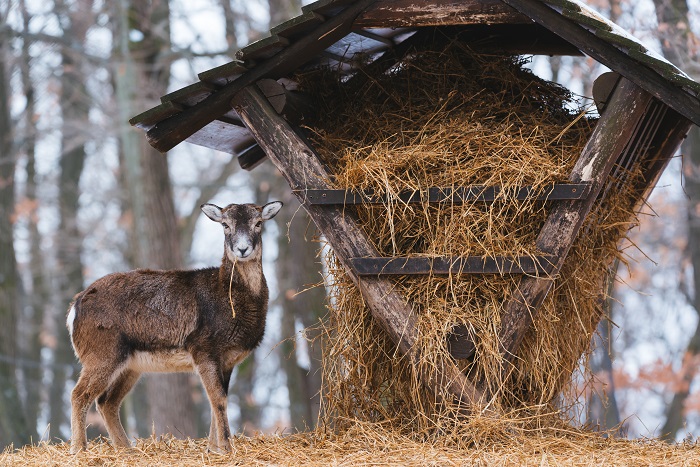 What Do Goats Eat During Winter?

Now if you are at this point, we’ve assumed you have already accepted that taking care of your goats during winter isn’t a cake walk.

In fact, you might need to milk some goats, and you’re going to need to make sure they have ample food and water. That’s for a separate topic, but more importantly what do goats eat during winter? The answer is hay.

When wintertime comes, you need to make sure you are prepared to feed your goats because they won’t be able to browse.

So you will need to make sure you have a source of hay that will last you throughout the winter. Now if you’re lucky you have your own hay field, but if you don’t you need to go out and buy plenty of it.

Once you’ve purchased your hay for the winter, make sure it is stored in a place that stays dry year-round.

A quick note: Damp hay is a potential fire hazard. Damp hay if stacked together will begin to break down, and begin to heat up like any compost pile.

What is Toxic to Goats? 50 Things Goats Can’t Eat

Contrary to popular belief, goats do not eat everything … or tin cans. The items on this list are dangerous to deadly for goats to eat.

Goats may be the only living creature on the planet that can consume poison hemlock and survive, but it really is not good for them – or perhaps their keepers.

The deadly hemlock spores can live on surfaces for up to three years – including the fur of the goats your children hug and you come into contact with on a daily basis.

Bread items are not necessarily unsafe for goats to eat, but they should be given in only very small amounts on rare occasions, if at all. When goats consume too much bread they will become bloated and experience other rumen health problems.

Common Questions on What to Feed a Goat

Yes they can! Goats love apples and many other fruits. Fruits have a lot of vitamins and are a great source of fiber.

Is Timothy Grass good for goats?

Yes, timothy grass along with other types of hay like orchard, brome, and bluegrass are perfectly fine sources of nutrients for goats.

What Do Goats Eat? Conclusion

The healthiest diet for goats mirrors the most traditional and natural that can be provided. We hope this guide was helpful

Commercially manufactured feeds and treats are not a necessary part of a goat’s diet and should remain only a very small portion of what they consume on a regular basis.

READ NEXT: Goat Diseases And Sickness OR Learn More About Fainting Goats 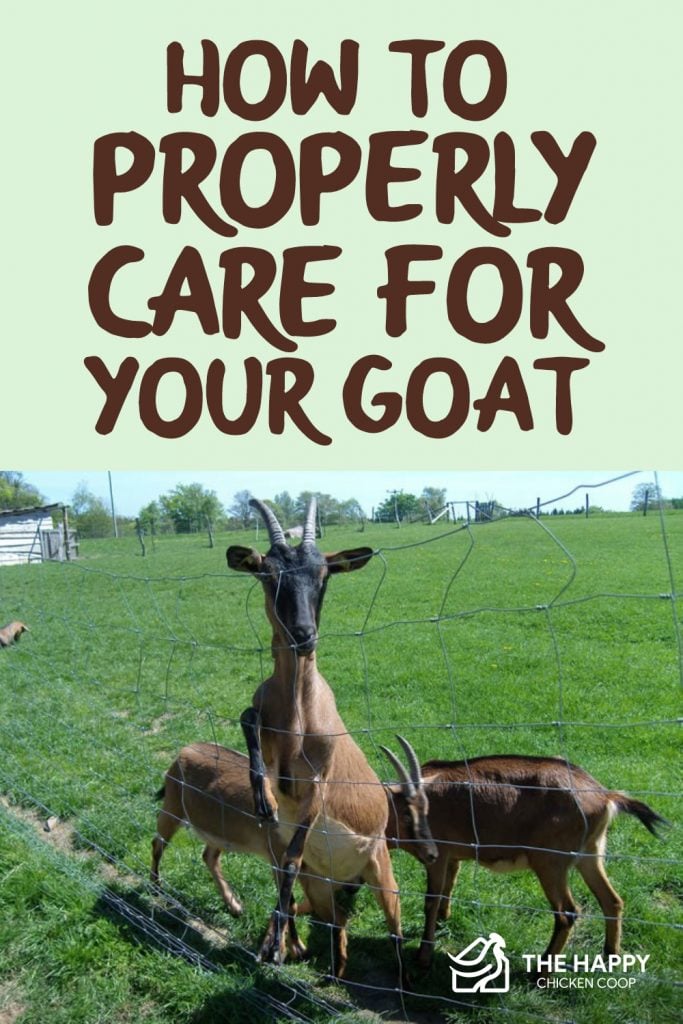