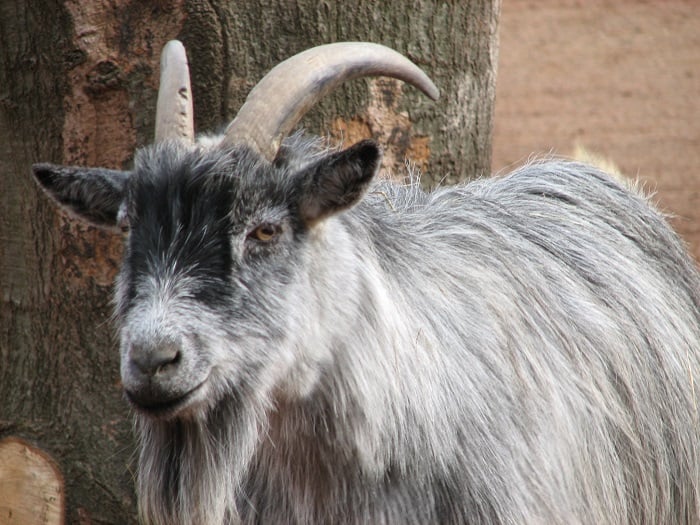 The smallest goat breed honors actually belong to two different varieties of goat – the Kinder and the Pygora.

Both of these miniature goat breeds were developed from cross-breeding specific established breeds to create a small stature goat that also excelled in producing meat, dairy, or fiber.

Of the more than 300 different recognized goat breeds around the globe, these two relatively recent miniature breeds create the smallest goats.

This small goat breed was created by crossing a white AAGBA registered Angora goat with an NPGA registered Pygmy goat.

Pygora goats, like their standard stature peers the Cashmere goat and Angora goat, are all fiber goats.

A miniature Pygora can produce three different and distinct types of fleece, the mohair roving is also excellent to use for weaving, knitting, spinning, and felting.

Members of this smallest goat breed are not harmed during the mohair shearing process and are typically shorn twice a year.

The same type of tools (manual or electric) and process that is used to shear sheep is also used when processing the fleece of fiber goats.

Mohair is the smooth and long fibers harvested from goats that are then used to make hats, scarves, lace, sweaters, and other soft and fluffy textile goods.

The angora mohair that is harvested from the Pygora and other fiber goats is often confused with angora wool – which comes from rabbits.

Pygora goats are growing in popularity in the United States, but the large-scale keeping of these small fiber goats is still primarily occurring in Texas and in South Africa.

When she took a trip through a Native American reservation in the southwest she was stunned by the colorful mohair on the goats being kept there.

Jorgensen began to wonder if she, who was also a 4-H Pygmy goat judge, could create a breed of goat that held the same beautiful coat colors as her Pygmy goats in a fiber goat mohair form.

The idea of Pygora goats was born.

Pygmy goats came to the United States on a boat from Africa alongside the tigers they were supposed to feed in the 1950s.

The Pygmy goats that survived the trip without becoming dinner were allowed to remain at a Texas zoo.

They became a popular attraction at the petting zoo and were eventually entered into a breeding program with area goat keepers.

Angora goats are among the oldest known breeds still in existence. Their mohair was used for making clothing and accessories dating back to at least the 14th century.

During the middle decades of the 19th century, a limited number of Angora goats were exported from their native Turkey to South Africa, New Zealand, and eventually, Texas.

While the mohair from Pygora goat can be dyed easily, it naturally comes in an array of exquisite colors including caramels, white, multiple shades of gray, black, and shades of brown.

Even as the miniature goats age into their senior years, their fleece coat remains quite soft and fine.

This small goat breed originated in 1985 when a Snohomish, Washington goat farmer suffered the death of a Nubian buck.

The Showalter’s who owned the Zederkamm Farm also kept a herd of Pygmy goats.

A Billy goat (or buck) from the Pygmy herd was eager to help fulfill the need of the Nubian does and nanny goats on the farm. 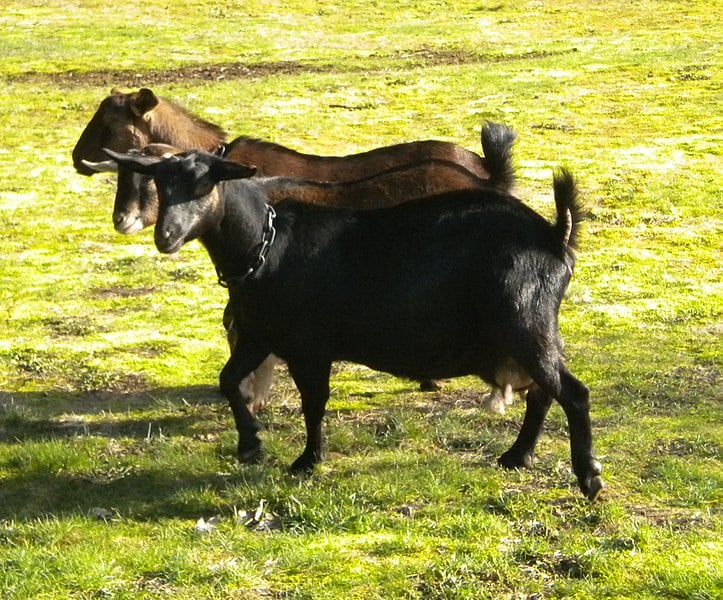 The Washington farmers bred their Nubian does to the Pygmy Billy goat and in the spring of 1986, the first Kinder goat kids were born.

The beginning breeders of this new smallest goat breed were three healthy, friendly, and cute little doe kids were born.

The milk from Kinder goats is especially sweet. The Kinder does turn out to be significantly great milkers.

Liberty, the name of one of the original Kinder does that was given to a local girl to show in 4-H, clearly showcases the superb milking prowess of this small goat breed.

Liberty has been capable of producing 1,500 pounds of milk and – or 52 and a half-pound of butterfat, over the course of a maximum of 305 days.

Teresa Hill, who also acquired one of the first does born at the nearby Zederkamm Farm, saw the potential for these small and incredibly efficient dairy goats.

Hill and two other local women, Kathy Gilmore and Daralyn Hollenbeck started an association to both register and promote this newly established dual-purpose goat breed.

Today, there are more than 50 different herd names registered with the Kinder Goat Breeders Association.

Like all goat breeds, these miniature goats require extensive protection from predators.

The only natural self-defense mechanism they possess is their horns – which is why most keepers do not de-bud the animals as kids.

Because Pygora and Kinder’s goats are such small stature breeds, the sturdy fencing required to keep them in a pen will only need to be three feet tall – which can offer quite a savings on materials.

Kinder goats weigh more than most mini goat breeds and have a stocky build, like a Nigerian Dwarf goat.

A flimsy fence will not likely hold up long if the goats take a notion to escape to the greener grass on the other side or frequently use the fence to scratch their backs and in between their horns.

The only real drawback associated with keeping a member of the smallest goat breeds relates to milking.

The teats on miniature goats are very tiny and can be difficult for some keepers to grasp. This is the primary reason why Nigerian Dwarf goats are not used for dairy purposes, only meat and fiber when crossbred.

Finding either of the smallest goat breeds noted here might require a lengthy drive after an online search or paying an extra feed for having the animal shipped.

Make sure to consider such factors when working within your established purchasing budget.

The Nigora goat breed, a cross between a Nigerian Dwarf goat and a fiber goat, is shorter yet heavier than Pygora goats, making them a close second on the smallest goat breed size chart.

There is often a hot debate over which miniature goat breed is truly the smallest goat breed.

Because all miniature goat breeds are within a single inch or perhaps up to two inches in height from each other, an unusually tall or unusually small mature goat in various herds can cause confusion and verbal battles over the smallest goat breed status based upon individual goat herd specifics.

Not only is height factored into the equation when determining which goat breed is the smallest, so is weight – which can also vary by two to five pounds among individual goats of the same breed … even in the same herd.