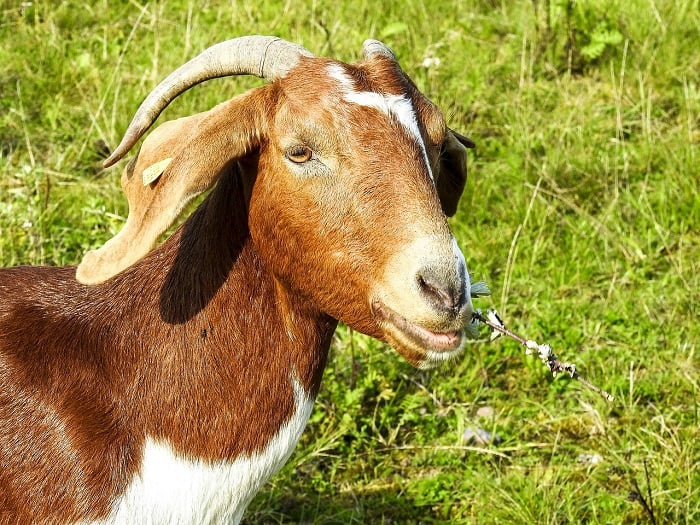 Boer goats are the prominent meat goat being raised in the United States. This goat breed is hardy and extremely adaptive to a host of different climates and terrain environments.

The market for the lean red meat produced by goats has steadily been on the rise in America.

The need for meat currently surpasses the amount that goat farmers in the United States take to market.

American goat meat sold on an annual basis now taps out around $30 million.

The uptick in “ethnic consumer” spending from customers who come from countries that traditionally eat goat meat to the high percentages that Americans consume beef.

This has caused the increased interest in the breeding of all meat goats – especially the Boer goat breed.

The name of this breed was derived from “Afrikaans” a Dutch word that means farmer. These large and stocky goats are so strong that they were once used as pack animals in their native South Africa.

Boer goats were developed by Dutch farmers in the early 1900s but did not come to America until 1993.

The Boer goat breed likely stemmed from indigenous goats kept by the Fooku, Namaqua, and San South African tribes being bred with goats that shared a cross of European and Indian bloodlines.

From the start, Boer goats were earmarked for meat and not dairy products due to the stocky bodies and the lean and moist meat they produced.

These goats also showed a remarkably quick growth rate, which was seen as a boon to the Dutch farmers who kept them.

While this goat breed first appeared in South Africa, a small amount of both Boer and Angora goat embryos were smuggled out of the country via a route through Zimbabwe to goat farmers by both Australian and New Zealand agricultural companies.

The smugglers wanted the Angora goat embryos because this breed is prized for its mohair production. At the time, snagging of the Boer goat embryos was merely an afterthought.

The embryos were implanted inside goat does in New Zealand. One Australian company that also had some smuggled embryos got into some money problems and the embryos, as well as offspring, were sent to a New Zealand quarantine station operator named Rob Moodie.

Moodie dubbed the herd her garnered African Goat Flocks. A different Australian livestock firm, Australian Breeding Management, wound up with thousands of both Angora and Boer goats that were ultimately released from quarantine.

All of the Boer goats that first found their way to America come from the offspring of smuggled embryos cultivated in Australia and New Zealand.

It took decades of deliberate and diligent breeding for the Boer goat we know today to develop. Keepers staunchly herald the breed’s superior genetic qualities and consistent production of quality meat.

The very same year that the first known full-blooded goats of these breeds arrived in the country, the American Boer Goat Association was established.

It did not take long for Boer goat breeding and marketing to hit an explosive level in the United States. 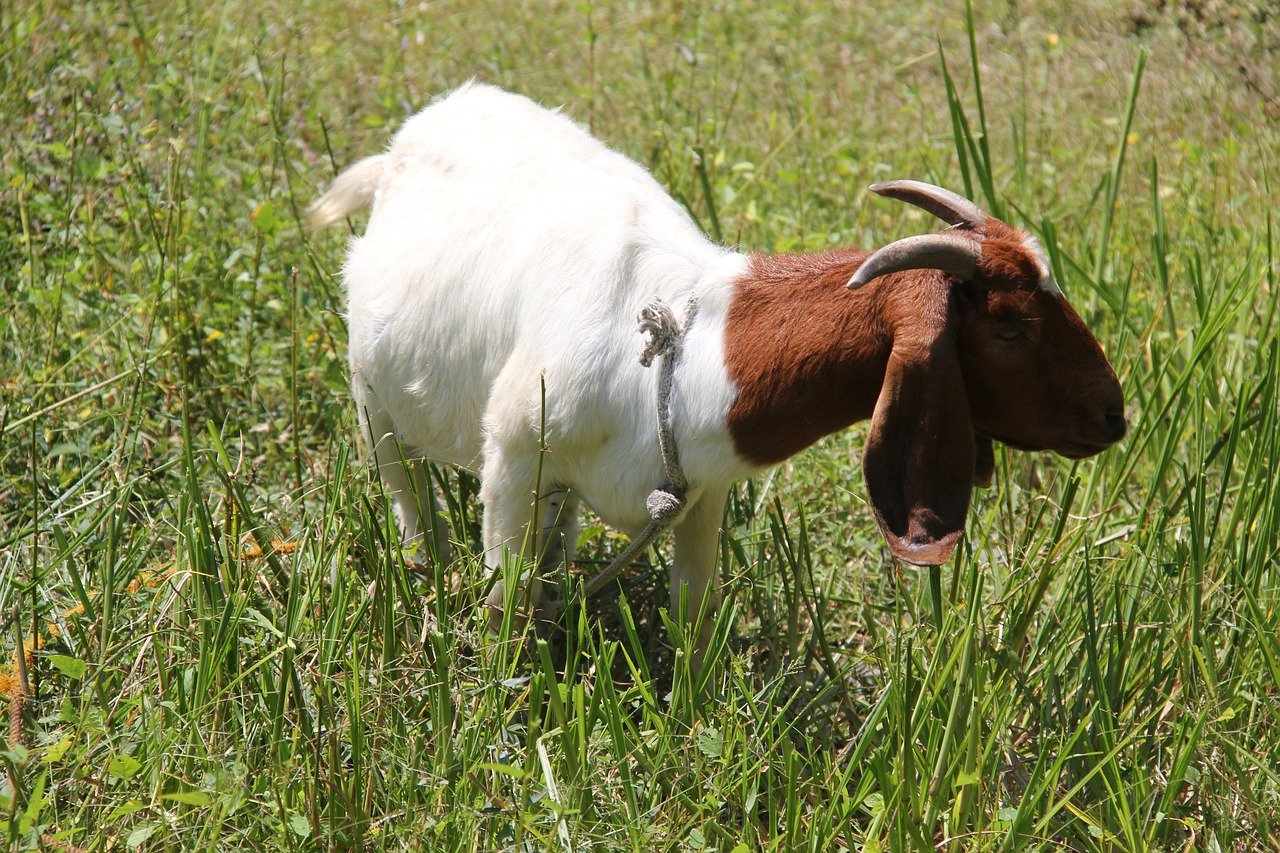 The American Boer Goat Association is an incredibly active force behind the increase in meat goat production in the United States. The group now counts in excess of 7,000 goat farmers as members.

Each year the ABGA registers more than 45,000 head of purebred goats.
It is possible to import Boer goats directly from the original South African strain, but they are quite expensive – even before the shipping.

There will be both a lot less paperwork and expense involved in locating a breeder with certified South African Boer goat stock and purchasing animals from them.

Any goat or sheep imported from Africa must remain in compliance with USDA rules and be placed in a herd that has been certified to conform with the federal agency’s Voluntary Scrapie Flock regulations.

Rules relating to the importation of goat embryos from Africa may soon be relaxed.

American buyers of purebred Boer goats imported from auctions in New Zealand and Australia once paid up to $10,000 per head … and still made money on the deal once offspring were born and sold for around $7,000 each.

The gentle giants of the goat world might be prized for their meat, but are now also being used as companion animals – a slot typically reserved for Nigerian dwarf and Pygmy goat breeds.

In spite of their size, Boer goats are notoriously calm and docile. Novice keepers are often discouraged from starting a herd of goats in this size range, but the Boer might just be the one exception. 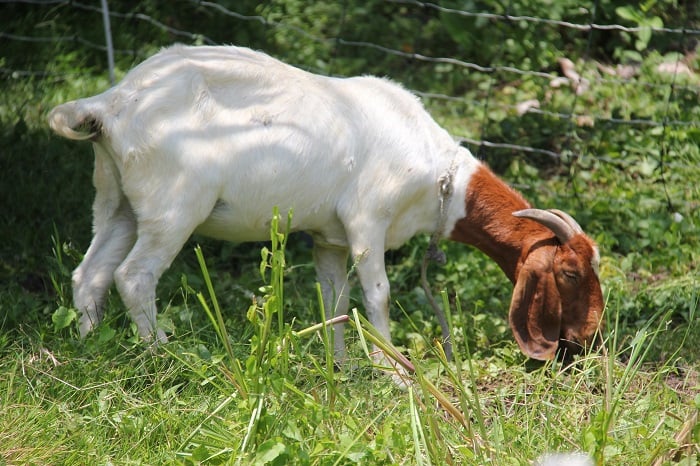 The advantage of keeping Boer goats is obviously their ability to bring top dollar on the meat market.

The calmer disposition of Boer goats also may mean that they require less climbing and romping “toys” in their pen to keep them entertained.

When a goat is living in overcrowded quarters or has nothing to do all day but wait to be fed, poor, destructive, and sometimes aggressive behaviors materialize – even in the most docile of goat breeds.

You do not need to butcher or take Boer goats to market to earn either a side income or a full-time living from keeping them.

Although the number of keepers in the United States has grown substantially over the past decade, the demand for quality breeders has increased as well.

Becoming a Boer goat breeder could be both an emotionally and fiscally rewarding experience.

The disadvantages of keeping Boer goat are few and tolerable. The first obstacle to consider when buying goats of this breed is the amount of space needed to keep such large animals – and the cost of feeding them.

Boers, like all other goat breeds, are browsers and require roughage in their diets to keep their rumens in check.

Wintering over a Boer goat herd will require either baling your own hay or buying it to fulfill the health and nutritional needs of the hefty goats – all of this vastly adds to farm operational costs.

Boer goats require the same care as all other goat breeds but do not forget to factor in their large size and sometimes surprising strength when creating a pen or barn and fencing.

They are strong and good climbers, make sure you reinforce the wood and barbed wire, wood, and high tensile wire, or hog panel and barbed wire fencing you factoring in the initial start-up husbandry costs.

The fence must be at least four feet tall to prevent the Boer goats from climbing out. I highly recommend using multiple locust posts around the pen perimeter and not just as corner supports.

Metal T-posts, just do not tend to be sturdy enough to keep the necessary fence sturdy over time as the Boera goat rub and push against it.

The high fertility rate of Boer goats helps breeders and meat farmers recoup the money they spend when investing in a top-quality breeding pair.

When you have a Billy goat that lives up to his potential, expanding a herd of Boer goats without spending a dime on introducing new stock into the herd.

Boer goats are capable of breeding capable throughout the year. Both males and females reach reproductive maturity when they are five months old.

A Boer nanny goat is pregnant for approximately five months and then nurses her kid or kids for roughly three months, before she can either be milked or is scheduled for breeding again.

Nanny goats may give birth to only a single kid during her first pregnancy, but typically, a Boer nanny gives birth to twin kids.

The traditional breeding season for goats occurs in April and May and again from the final days of summer up to the first days of winter.

How Much Do Boer Goats Cost?

As with all goat breeds, the cost of a Boer goat will depend on multiple factors. First and perhaps most important, is local availability.

If there are no breeders in your region, the cost to make a trip to a breeder and inspect the goat and either have it shipped or haul it home can cost several hundred dollars.

If purchasing a registered or show quality Boer goat the price tag will likely be between $400 to $500.

Doeling or nanny goats can often garner a slightly higher price than intact males.
Because Boer goats are so sought after and bring a high price both on the meat market and indirect sales.

Keepers should make time to thoroughly document the health, vaccinations, reproduction statistics, breeding lineage, seasonal weight, and butcher weight of each herd member to help fortify their claims of quality stock for selling or marketing purposes. 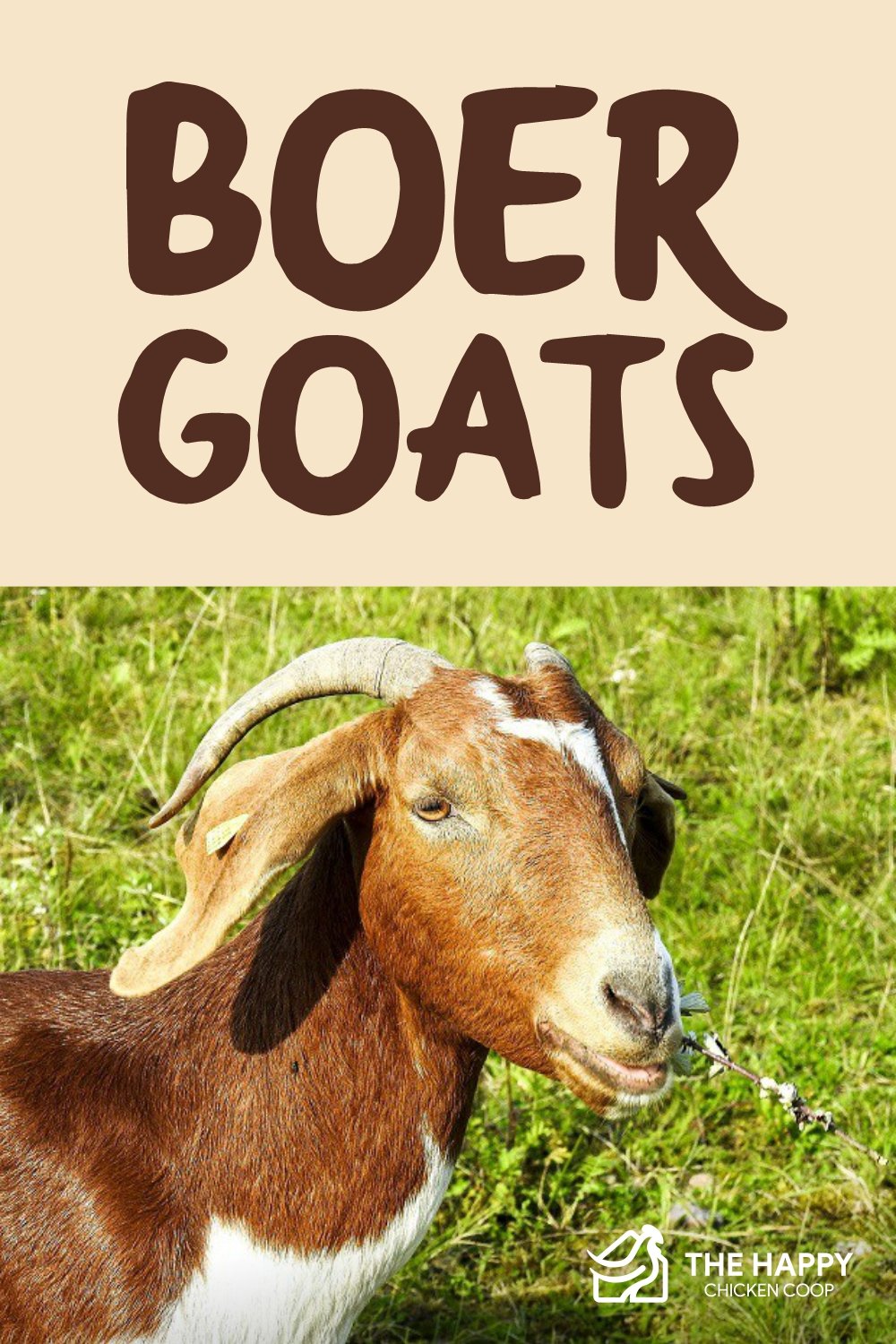 2 thoughts on “All You Need to Know About Boer Goats”