All You Need To Know About Meat Goats 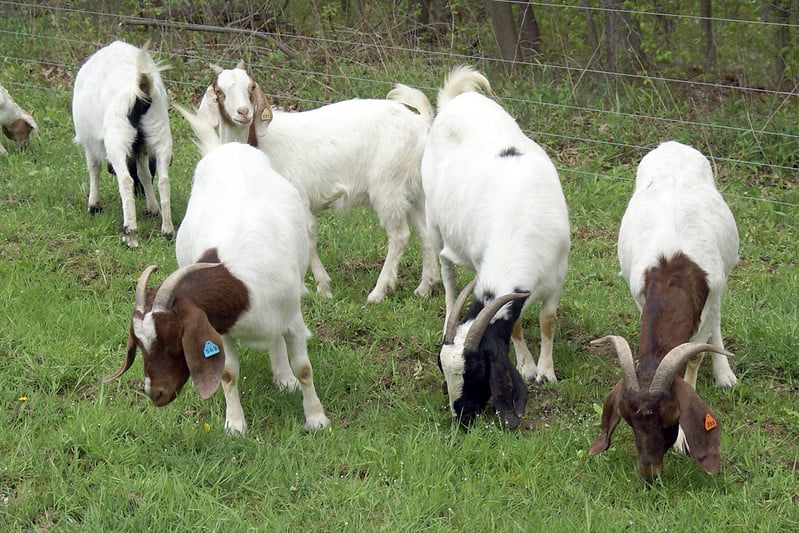 Raising meat goats on the homestead offers lean and naturally raised protein for the dinner table and an opportunity to earn some extra cash to funnel back into your sustainable and self-reliant efforts.

Owning a large or even medium acreage homestead is unnecessary to keep quality meat goats. The miniature Pygmy goat breed offers the opportunity to raise meat goats even for small or backyard homesteaders.

Always check to make sure home butchering goats – or any small livestock, is not illegal in non-rural farming and homesteading regions.

What Is Goat Meat Called?

Goat meat is called chevon, or sometimes even mutton, derived from mature animals. In some regions of the world, goat meat is also referred to as capretto or cabrito – meaning kid or young milk-fed goat.

Goat meat is prevalent around the globe, more so than any other meat-producing animal in many regions.

It has not traditionally been famous in the United States, but the percentage of Americans eating this lean, low in cholesterol and fat meat has been rising over the past decade.

Goat ranches have increased substantially even in the heart of cattle country – Texas.
Purchasing, raising, and processing goats for meat is less expensive than doing the same with cattle.

Such an operation can be completed on far less land. Meat goat breeds can produce kids(s) twice each year and take substantially less time to mature than cattle.

Approximately 2.1 million meat goats are being raised across the country. Sales of feral goats imported to America from Australia brings in roughly 30 million on an annual basis.

Goat meat is leaner and offers more protein than poultry.

Until the 1990s, the bulk of the goat meat produced in America stemmed from male dairy goats that people no longer wanted.  These were typically Spanish or Spanish crossbred boar breeds harvested for meat.

During this same decade, the South African Boer goats arrived in the United States. Because the market for fiber goats took a downturn, animals once bred for their mohair were often crossbred with Boer goats.

The crossing of the breeds developed a goat that not only was more muscular in tone but offered a higher meat yield. 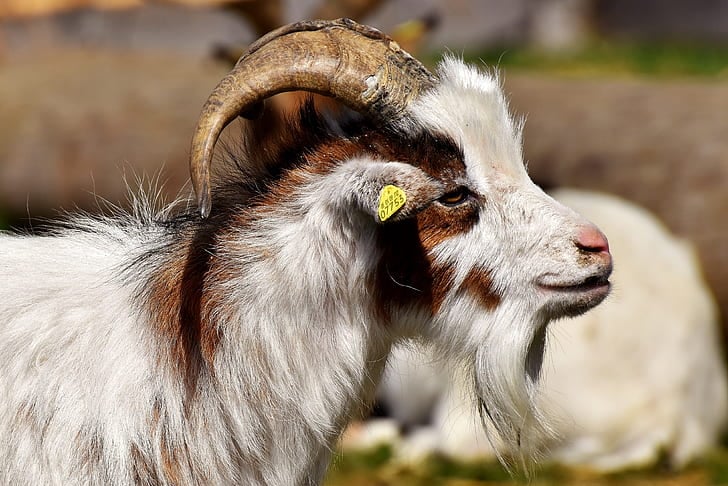 Boer goats are so stout and hardy that they have been used as pack animals in rugged terrain.

The breed developers were focused on creating a meat goat that matured rapidly, was hardy in a broad array of environments, and boasted prime carcass qualities.

It took decades of carefully selected breeding practices to create the Boer goat breed. The first full-blooded Boer goats did not arrive in America until 1993. This breed remains at least one of the most popular meat goats in the United States today.

Boer goats can feature solid coats of white or red but most often feature a paint or spotted coat. They are known to not only have a rapid maturity and high fertility rate but also to be an incredibly docile goat breed to raise.

Mature Billy goats tend to weigh in between 200 to 340 pounds. Mature female Boer goats generally weigh between 190 to 230 pounds.

This meat goat breed is popular with homesteaders and small farmers who live in hot climates throughout the globe.

Spanish goats were initially developed in both hot and sparse terrain conditions, in which they quickly thrived with barely any intervention by their keepers.

This meat goat breed arrived in North America with early Spanish explorers, who brought the livestock along on ships as a meat source. These goats were dubbed “brush goats” or Spanish goats.

The breeding ancestry of these original feral goats remains unknown mainly as they were developed through natural selection and not at the hands of farmers.

The DNA from Spanish goats being raised in the United States indicate they were of Iberian origin. These brush goats are prone to keeping or even putting on weight when living without the aid of human keepers in even the harshest of the environment.

The size, horn shape, color, body shape, and ear shape are not generally consistent in this breed, also likely results of their feral origins and hands-off breeding.

Goats identified as being from this breed typically have large horns that are often twisted in nature.

Initially, Spanish goats were kept not just as meat producers but also for dairy, mohair, and hide processing. Spanish goats can range in size from only 50 to 200 pounds.

The Kiko meat goat breed was developed during the 1980s by New Zealand ranches Anne and Garrick Batten.

The couple crossbred imported dairy goats like the Toggenburg, Nubian, and Saanen with local feral goats to create the breed. Kiko is a Maori word that means meat or flesh.

The Nelson island region ranches were striving to create a severe climate hardy meat goat breed and one that would mature rapidly with minimal handling or aid from the keepers.

The Battens required four generations of breeding to develop the Kiko breed. The Kiko meat goats were first imported to the United States in 1992.

The goats were exported mainly from New Zealand to America to ranchers seeking to improve goat meat production. They often crossed the Kiko goats with Spanish goats.

The Kiko goat breed was not immediately popular in the United States. After several years the meat breed gained traction in the South due to its high resistance to parasites and the superb maternal nature of its nanny goats.

This meat goat breed is more commonly called “fainting goats.” These animals possess a genetic mutation that causes their legs to stiffen, prompting them to fall over, when they are startled.

They do not lose consciousness, and the so-called fainting does not cause the myotonic goats to feel any pain.

Tennessee goats are known as a “Landcare” breed of livestock. This means they are domesticated on a local level. Then they adapt to their environment over time and have traditionally been isolated from other populations of the same animal type.

Fainting goats first became known during the 1970s. They “discovered” when John Tinsley, a migrating farm hand appeared on the Marshall County farm of Dr. H.H. Mayberry, in Tennessee.

Little is known about Tinsely, who was then described as having a “strange accent” and often wore a beret-style hat. He is believed to have hailed from Nova Scotia, bringing along one Myotonic Billy goat and a handful of mature female goats of the same breed with him.

John Tinsley, a quiet man by all accounts, never shared any details about how he came to have the goats or where they originated from before arriving in Tennessee.

One day he suddenly decided to leave the Mayberry farm and sold the fainting goats to the doctor before making his exit.

Tennessee goats are not only incredibly self-sufficient and able to traverse the most rugged of terrain quite easily, but they also boast a very friendly, docile, and curious nature.

Myotonic goats are a bit unusual in the goat world because they are not prone to trying to either climb or jump their pen fencing.

Kidding and milk production seems to come both naturally and easy to Myotonic goats, as well.

These heavy parasite-resistant goats weigh about 200 pounds on average, regardless of sex, once they reach maturity.

These miniature goats were once thought to be merely popular petting zoo attractions. They arrived in the United States during the 1950s aboard a ship from South Africa – along with the big cats they were supposed to feed on the way to American zoos.

Pygmy goats are very muscular for their compact size. A mature female Pygmy goat weighs around 60 to 86 pounds.

A mature Billy goat typically weighs between 50 to 75 pounds.

While you will not harvest as much meat from a Pygmy goat as the standard size prime meat goats on this list, lean beef boasts a nice flavor and is incredibly tender.

Pygmy goats are famous meat goats on small farms, ranches, and homesteads for residential consumption because they are incredibly friendly and easy to handle.

They take up substantially less space to house and range than standard-size goats.

When crossing with another famous miniature goat, the Nigerian Dwarf, homesteaders can develop a quality dual-purpose meat and dairy goat. 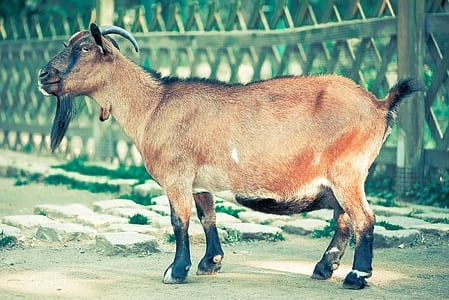 Supplementing a meat goat’s diet with winter rye, red winter wheat, and corn fodder will help them retain and increase their weight during the winter months through the early weeks of spring.

See related post below:
Learn More About the Smallest Goat Breed
Nubian Goats- What you should know

Goat meat is not for the faint of heart.

Some say the flavor is sweet, others say it’s pungent. You could say the strong gamey flavor is an acquired one.

If you know your way around the kitchen however you can find a way to mask the gaminess of the meat.

Is raising goats for meat worth it?

According to reports in 2020, the desire for goat meat at the table is increasing as more people opt for knowing their meat sources.

As far as goat farmers, business in the goat meat biz is good and profitable.

Before all the popularity, those who raise and butcher their cattle and poultry birds claim they love to raise meat goats!

What is the easiest meat goat to raise?

Regarding affordability and maintenance, the Kiko meat goat is your best option. They are hardy, considering they do fine without much vegetation and still dress out great for table fare.

There are some other options for easy to raise meat goats as well:

What is goat meat called?

You’ll know if you’ve been to India or are a native. But for us non-natives, meat from an adult goat is called chevon.

And if you’re interested, yes, there is also a name for younger goat meat outside of just a kid. It is called capretto or cabrito. 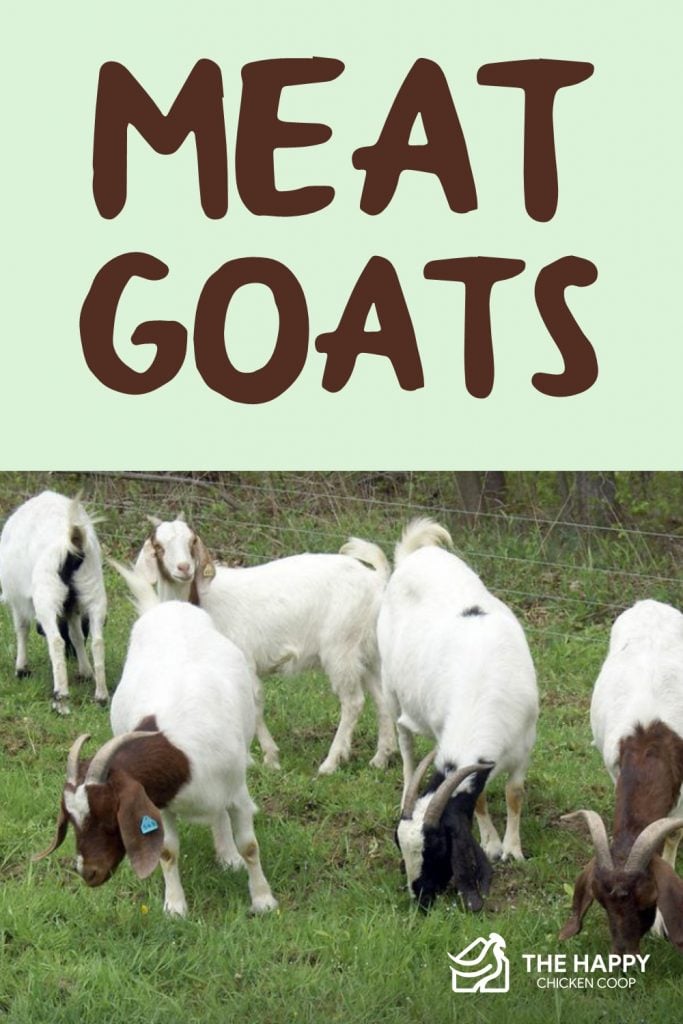