Goat Milking: Everything About Milking Goats and How To Milk Them 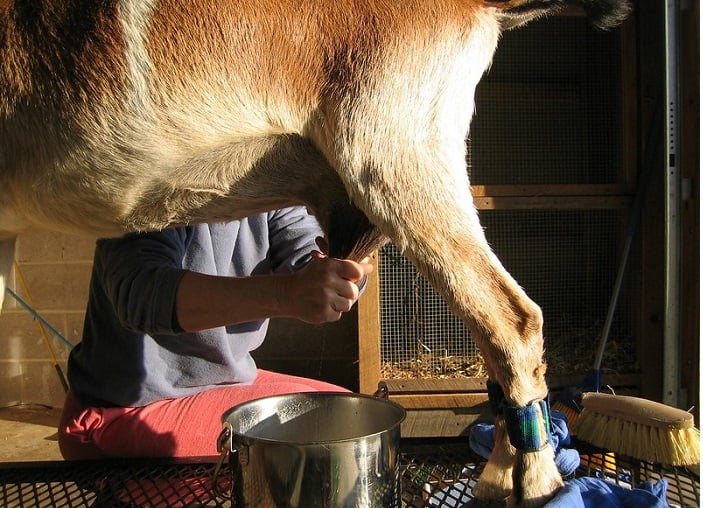 Learning how to milk a goat is not a difficult process. In fact, the actual goat milking part of the homesteading chores takes only about five to 15 minutes a day.

To consistently garner a steady flow of milk, nanny goats must be milked every single day while they are lactating.

Before you can get milk from a female goat she must have become pregnant and delivered kids. A doeling or nanny goat’s body will almost never be ready to excrete milk (lactate) until she had kidded (given birth) and needs to provide milk for the baby goats.

Rarely does a condition dubbed precocious udder develop. But, when it does, a female goat can give milk without having kids.

This condition occurs when a mammary gland necessary for milk production develops either without the goat having been bred or works overtime for the stage of gestation the nanny goat is experiencing.

The precocious udder is less rare when keeping dairy goats that stem from extraordinary genetic lines. 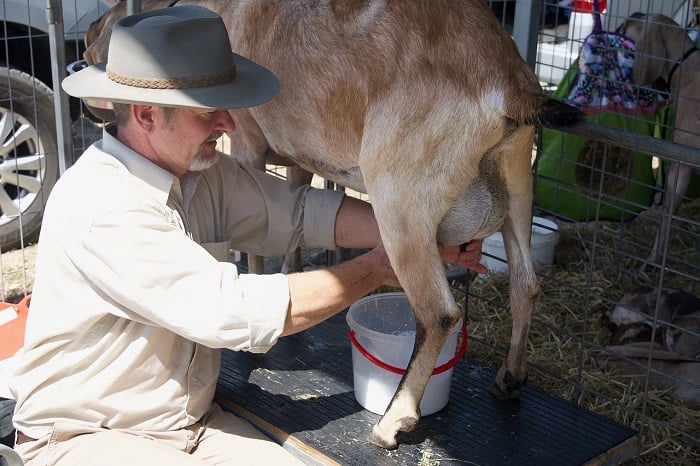 A top-quality dairy goat is sometimes capable of “milking through” straight from one post-pregnancy to the next time she is expecting twins.

There is no guarantee you will garner this much milk from a single dairy goat, but it is possible.

Let’s go through a quick run through of supplies you will need:

You can try to milk a goat without the use of a milking stand, I did once … and only once.

You sweet and compliant nanny goat just might surprise you when she digs in her hooves and refused to stand still and let you milk her.

Building or spending approximately $150 on a milking stand is an investment I doubt you will regret.

Can you milk a nursing nanny goat? The answer to this question is – depends?

Goats are equipped with a reflex that essentially holds back milk for their kids while they are being nurses.

She will effectively stop the milk from flowing when you milk her when she senses the rest of her daily stores need to be held back for her babies.

It is best to wait until the baby goats or kids are 8 weeks old and weaned. Once the kids no longer need the milk from their mother, she will hit the freshening stage of her milk cycle.

A nanny goat should not be milked until she had entered the “freshening” portion of her milk cycle. This means the nanny goat is fully entered her milk cycle and no longer needs to save back milk for her kids.

This stage can last up to 12 months, on average.

When a nanny goat hits the “going dry” stage of her milk cycle it is time to breed her again. Typically a nanny goat’s milk dries up approximately two months before she should be “refreshened” or rebred.

The milk near the end of the cycle will usually be of both lesser quantity and quality. It is not uncommon for milk to boast a salty taste shortly before the need for freshening arise.

The salty taste to goat’s milk is caused by an increase in mineral production.

While this milk is still safe to consume, most folks opt against it due to its rather unpleasant taste.

How To Train A Goat For Milking

Some goats are more apt to take to milking than others.

A first-time nanny is likely to put up more of a fuss about entering a milking stand and calmly remaining there while you milk her than a more experienced nanny.

Expect to feel like you just wrestled a bear after the first few milking sessions with new nanny goats.

But, do not despair, the transition into the milking stand and the expected behavior during the milking process nearly always improve after the nanny begins to understand what is expected of her and that the imposition you are subjecting her to is only a temporary one.

If you have raised a daughter and survived the sometimes overwhelming and exasperating task, you can milk a fussy goat. You simply must become more determined and stubborn than they are – at least for roughly 15 minutes.

By the third to fifth trip to the milking stand, even the most disgruntled nanny goats typically settle into the process and put up less of a fuss when it is their turn to be milked.

To prepare a nanny goat to dry up before freshening, start milking her only every other day for a week.

Never simply stop milking the goat, this will not stop milk production and will cause swelling, bloating possible infection, and other severe health issues for the nanny goat.

Choosing a quality dairy goat breed is perhaps the most important step in the goat milking process. While any nanny goat will produce milk, both the quantity and the quality of that milk can vary substantially.

How much milk you acquire on a daily basis from your nanny goat will depend on several factors. Milk production may be lower if the goat is young or thin or if she had multiple kids that depleted her milk supply.

Top dairy goat breeds typically take to the milking process far easier than other breeds, which is a major plus for newbie milkers who have never before dealt with a fussy goat fighting against being placed in a milking stand.

Let’s go through some of the best milk goats:

Goat milk has a higher butterfat percentage than cow milk, making it almost as sweet to taste like buttermilk.

Folks with lactose intolerance issues are often able to consume food made with goat’s milk or glasses of goat’s milk without suffering the same ill effects associated with the consumption of cow’s milk.

As you can see, there is a simple process to goat milking all you need is the right supplies. I personally love goat’s milk compared to cow’s milk.

The most important part to maintaining and keeping healthy dairy goats is their diet and taking care of their udders.

I hope you found this helpful and you are well on your way to milking your first goat. It is an experience unlike any other. 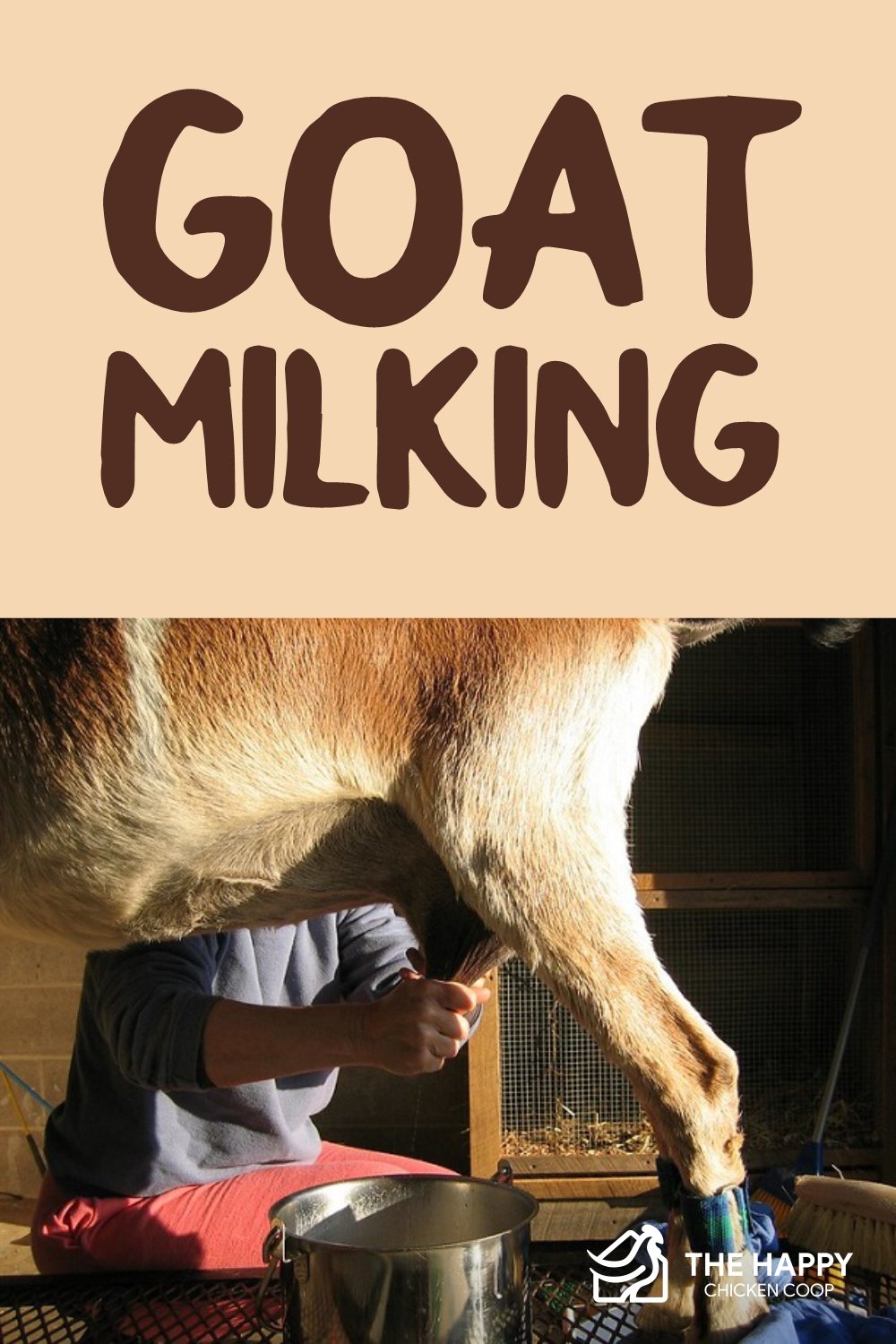