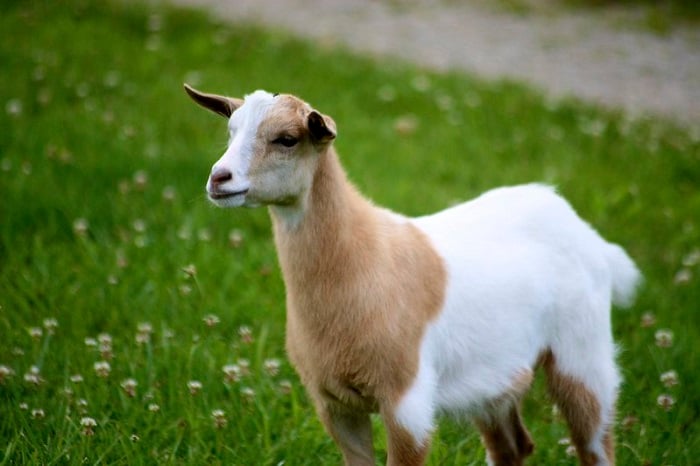 Tennessee Fainting goats, or myotonic goats, are often kept as merely entertaining farm pets but are actually bred to be a high-quality meat goats.

This American goat breed does not actually faint but merely stiffens up and falls over sideways when startled due to a hereditary condition known as myotonia congenita.

The temperament of Tennessee Fainting goats makes them ideal for petting zoos, farm pets, and companion animals in general.

Some keepers staunchly maintain that over time, fainting goats can become as loyal of a companion as your favorite dog.

Fainting Goats: Why Do They Faint?

Although they never lose consciousness, the goats do appear to faint but their genetic condition does not cause them any physical pain or harm.

The degree of leg stiffness and the amount of time a fainting goat remains fairly immobilized on the ground can vary greatly from goat to goat even if they are siblings.

When startled, both the ears and eyes of this goat breed send immediate electrical signals to its brain that in turn prompts a flight or fight response.

Once this response signal is triggered, the Fainting goat’s leg muscles stiffen, causing them to immediately fall over for a few moments.

While these goats possess enough sodium in their muscles to relax when startled they do not have enough chloride to pull off such a normal muscle response.

Although the “fainting” time varies by a goat, even among siblings, the average time the animal lays immobile on the ground ranges from five to 20 seconds.

The fainting time can change in each goat depending on its age and how well it is hydrated when startled.

Older goats do not necessarily stiffen up and fall over like they are fainting as often as younger goats, typically.

Although far rarer, this same myotonia congenita condition is present in both other types of animals and humans.

Myotonic goats were first recognized as a breed during the  1880s.

John Tinsley, a farmhand, moved to Marshall Valley, Tennessee from Nova Scotia and brought this odd breed of goat with him.

As one can imagine, awareness and interest in the fainting goats grew rather rapidly as more and more people witnessed their response to being startled.

Fainting goats are one of the easiest keepers in the goat world. Most goat breeds are highly prone to climbing fences and making grand escapes from their enclosures.

Myotonic goats seem content to remain where they are placed – perhaps because of their highly unusual response to being easily startled.

Farmers not only grew enamored of Fainting goats because of their willingness to stay inside their pen but also due to their enhanced reproductive rate and quality muscular conformation.

As farmers around Tennessee began buying and breeding Fainting goats an appreciation for the breed spread outside of the region.

By the 1950s, Tennessee Fainting goats were also becoming commonplace in the central Texas hill country – where they were bred to be a bit larger than the original members of the breed.

Over the next several decades the popularity of this goat breed waned, possibly due to the emergence of “factory farms” and the quick breeding to slaughter practices such operations favored.

But, in the latter years of the 1980s, folks began rediscovering both the Tennessee and Texas myotonic goat breeds. 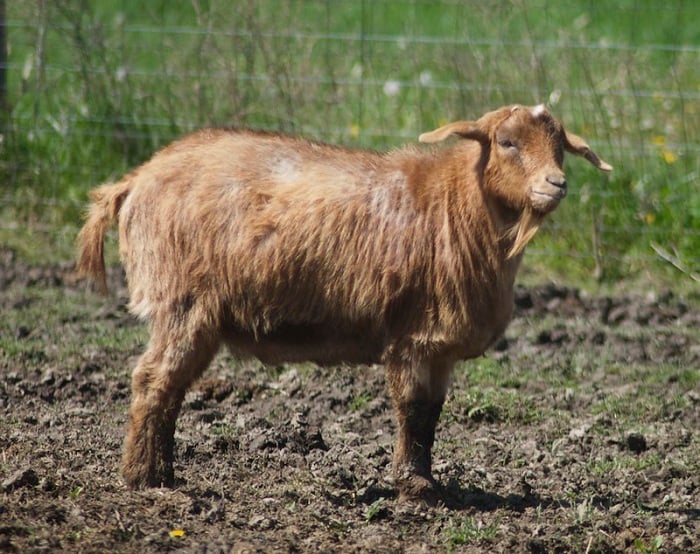 Several groups of breeders worked diligently to bring the Fainting goat breed back.

They attempted to develop a blending of Tennessee and Texas versions of this goat variety that were large, produced excellent meat, had superb muscle tone, and still maintained enhanced reproduction rates.

The other group focused on developing the Fainting goat variety and bred the animals to a smaller size while promoting the breed as a farm pet or novelty livestock.

The breeding season for Fainting goats typically occurs between August through January.  It is not uncommon for a doeling or nanny Fainting goat to become pregnant during the spring or early summer months.

Billy goats of this breed tend to become more aggressive when they go into ruts at the beginning of the traditional breeding season.

A one-year-old Myotonic Billy goat can servicing up to 10 doeling or nanny goats in a month.

A doeling typically reaches maturing when it is only four months to one year old. The usual gestation period for Fainting goat nannies is roughly 150 days.

Myotonic nanny goats tend to keep their kids tucked away and hidden during their first few days of life, which is fairly unusual for most goat breeds.

Most Fainting goat nannies kid every six months and often throw twins or even triplets. 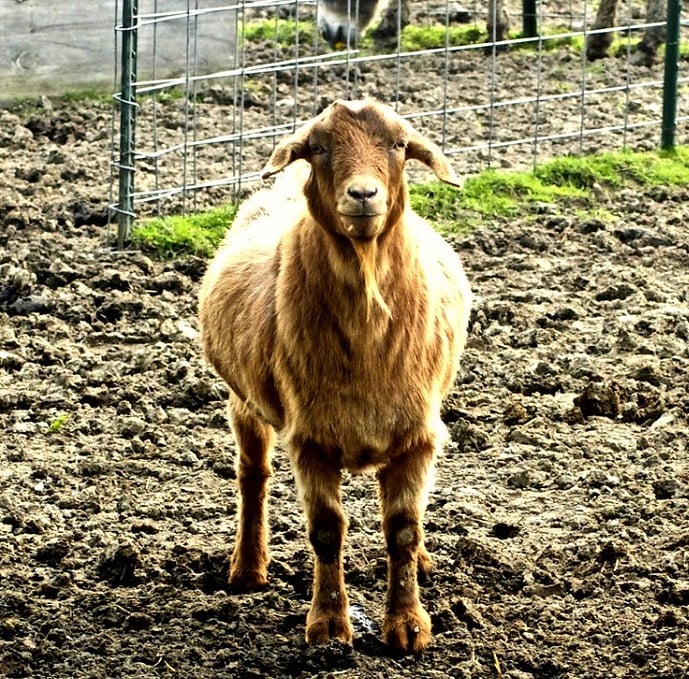 There are no real disadvantages of keeping Fainting goats as opposed to other more common goat breeds. In fact, Myotonic goats are often perfectly suited for novice keepers and folks who have only small acreage to use for livestock.

Nearly all goat breeds but this one are notorious escape artists. It is almost impossible to keep the entire goat herd penned all the time, which is why I taught my goats to free-range.

But with Fainting goats, you can erect nearly any type of fence that is at least one and a half feet tall and it would be exceedingly rare for them to attempt to jump over it or push through it.

Fainting goats are also known for their friendly, docile, and intelligent personalities.

If you want to keep goats that young children or elderly members of the family can tend to and enjoy, this breed may be the best fit.

Unless it is rutting time, even Billy goats of this breed tend to be far calmer and more welcoming of human interaction than many other breeds of goat.

The only difficulty many Fainting goat fans have with the breed is finding ones to buy. Because their population numbers remain relatively low.

Expect to drive a good distance and dig a bit deeper in your wallet to purchase a pure Texas or Tennessee Fainting goat.

It is often easier to find a Fainting goat and Boer goat cross, but even acquiring goats of this type could be somewhat difficult.

Once you find a reputable breeder of purebred Fainting goats, you should expect to spend between $300 to $600 per goat – but the price does vary by region.

Unfortunately, many breeders or auctions either fail to know how to correctly identify a pure Fainting goat or simply are not honest livestock brokers.

When shopping for a Fainting goat consider the experience to be a true buyer beware type of deal. Reputable breeders will go out of their way to show you their breeding pairs and the lineage of their herd.

Inexperienced, novice or sneaky sellers will likely not be able to tell you about the distinguishing features a Fainting goat should possess, so it will be up to you to know these identifying attributes before handing over any money for the animal.

Although fainting goat populations are still deemed at vulnerable population levels, they were once such a thriving breed that keepers used them as a herd protector.

Because myotonic goats “faint” when startled, they were essentially used as sacrificed animals to protect the more expensive members of the herd in case a wolf, coyote, or bear approached the pasture.

An animal that even momentarily lays on the ground in a stiffened and immobile state is easy prey.

While the predator dined on the Fainting goat the rest of the animals had time to scatter and run to safety.

Fainting goats are kept basically around the globe but they are bred in far greater numbers in the United States.

The Livestock Conservancy considers Fainting goats to be a vulnerable breed because there are only about 10,000 in known existence in the world. 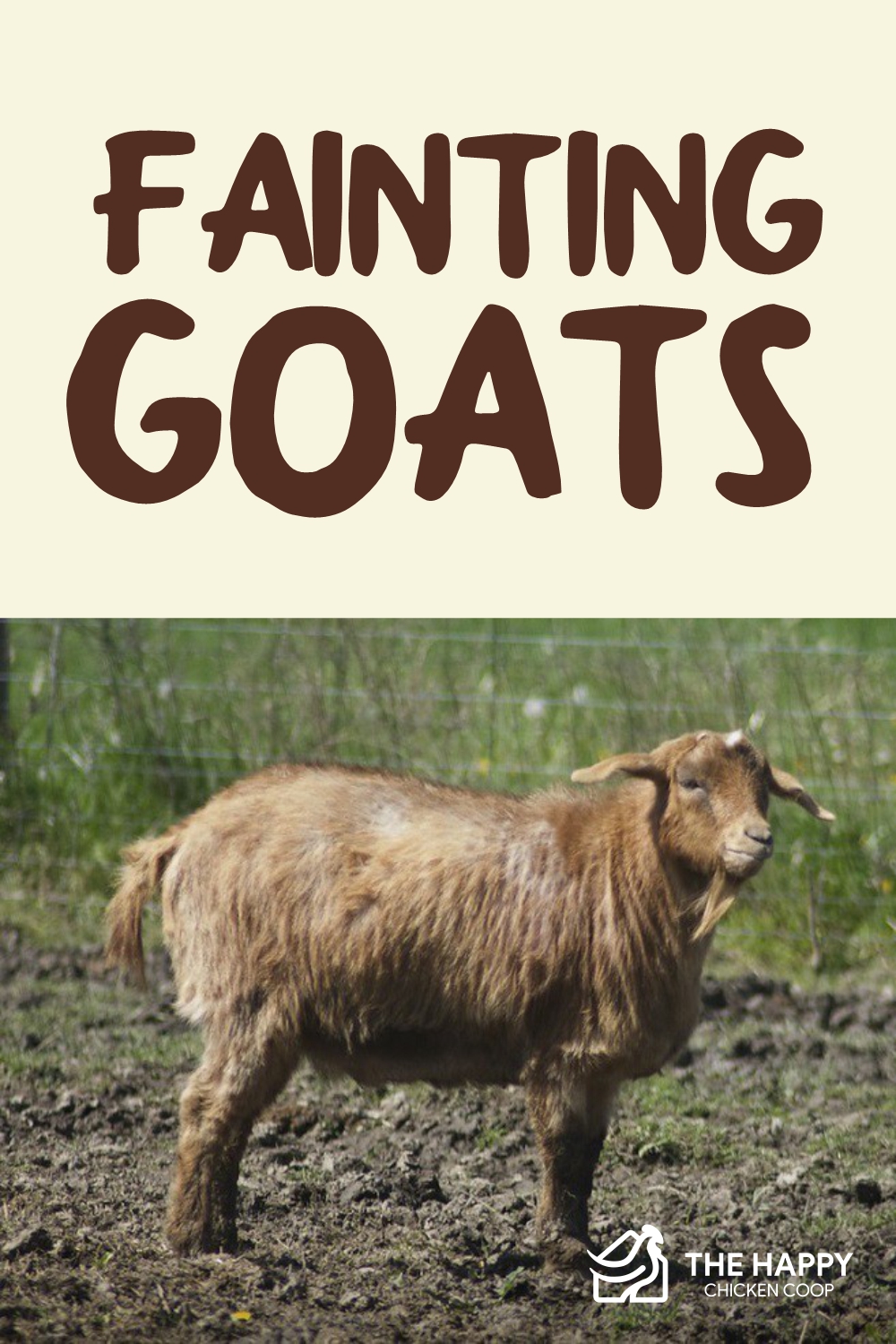