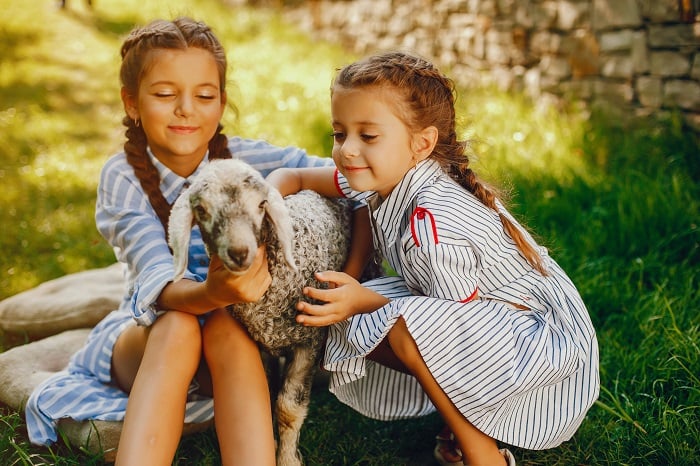 Goats can be excellent pets. Their adorable nature and charming personalities, along with their intelligence, are why goats are frequent stars in petting zoos.

Now, not only being groomed as companion animals but also are in high demand for incredibly lucrative “Goat Yoga” classes.

Keeping goats as pets not only brings the joy commonly associated with having any typical type of pet but also provides a superb training ground for young farm or homesteading children.

These normally easy to handle animals can teach children as young as two how to care for and be around livestock as part of their daily chores and to pave the way for a successful 4-H experience.

Although nearly any goat breed can be kept as a pet, it is typically the miniature breeds that are used for this purpose – and as kids in goat yoga classes. 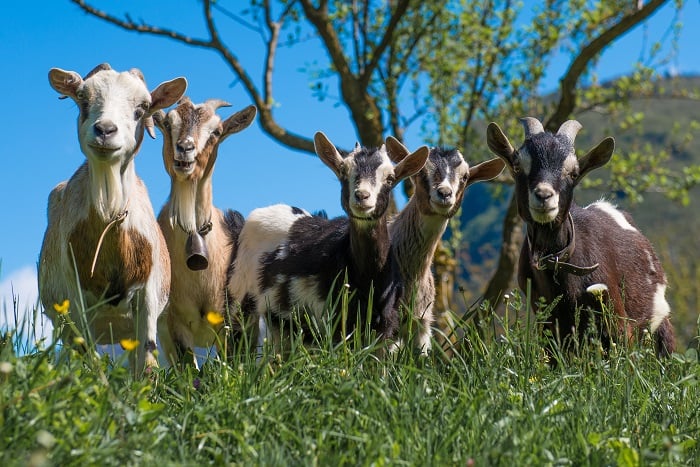 What Are The Best Goats To Keep As Pets?

Are Goats Expensive To Keep?

Regardless of the breed of goat you choose to keep as a pet, typical husbandry costs will range from $10 to $20 per week for their feed and water.

Mature goats eat two pounds of food per day. If the goats have space to browse for their own food – grass, twigs, leaves, etc. and you bale your own hay, the cost of keeping a goat will be less expensive.

Goats, like cattle and sheep, are ruminant animals. This means they have four stomach chambers and high metabolism.

Do not let their small size fool you, even a miniature goat is going to consume copious amounts of hay during the winter months if they cannot forage for the roughage they need on their own.

Do not make the mistake some newbie keepers do and skimp on the hay during the winter and provide only grain.

When a goat’s ruminant gets out of whack it WILL become bloated and sick – both conditions can turn deadly in a matter of just a single week if not treated properly.

If your pet goats cannot free range on diverse terrain or do not have a large pen with natural and/or man-made toys to climb upon that boast porous and hard surfaces, you will have to file their hooves about every six weeks.

Learning how to trim goat hooves properly is no more difficult than trimming a dog’s nails, and the manual equipment to do so can be purchased for less than $100 in most agricultural supply stores. If a vet does the hoof trimming, expect to pay a minimum of $15 per goat.

Do a bit of math before deciding how many goats your homestead can support. A herd of 10 goats can clear an acre of ground of all edible food in a single month.

Goats go potty a lot – a whole lot, even as babies.

If you are going to keep goat kids inside for even a short time, potty training them or cleaning out a litter box you make for them must be done DAILY to prevent the animal from being exposed to harmful bacteria that can lead to severe infection – or death.

Goats are not really biters, not like dogs or cats, at least. But goats have taught and will bite if they are threatened enough.

A goat uses its teeth much in the same manner as we do our fingers. If you are bitten by a goat and their flat edged teeth, it will feel like a pinch and likely not break the skin.

A goat’s typical self-defense response is to use their horns to head butt anyone on two legs or four, that are posing a perceived threat to them.

Goats that have never been around dogs often head butt even if the dog is only curious about them.

This type of behavior can quickly cause even the most docile of dogs to give into their own natural response and attack the goat.

The horns on a goat are the animal’s only true measure of self-defense. Many folks recommend disbudding (removing horns when the buds appear on baby goats) to prevent potential injury to the other goats, farm animals, and people.

I almost went this route as a newbie keeper and am now incredibly glad that I did not. I prefer to raise all of our animals in the most natural way possible.

Had I not allowed Pearl to keep her horns she surely would have been dead before I was able to run and reach her during the dog attack.

The knocking of horns is part of goat play and although two Billy goats can fight and harm each other with their horns, few people keep more than one mature Billy – and they will find a way to fight even if their horns were removed.

I allow our toddler and preschool grandchildren to tend to the goats and have never had a single injury to a goat or human that was caused by horns.

Goats are best kept with other goats, but there are safe farm animals with which your pet goats can also happily commune.

Miniature donkeys and goats can become besties in minutes. The little donkeys also provide protection from predators – they love to kick the stuffing out of coyotes, a prime goat predator.

Goats can also commonly cohabitate with sheep, horses, and sometimes even cattle.

The goats should have a safe place to go at night. A shelter as simple as a dog house will work fine for miniature goats, but predators are lurking about such a set up will not protect them.

At night our goats follow me into a stall for evening snack (timed treats are a great training tool) and they are locked up for the night.

A double layer or hardware cloth (rabbit pen wire) covers the top and sides of the horse stall to protect the goats from mountain lions, bobcats, and the kids from smaller predators like hawks and mink.

The fencing around any goat pen you create or a property border when free ranging goats should stand 32 inches tall if keeping miniature breeds or 47 inches tall when standard size goats are kept as pets.

Goats WILL climb a chain-link fence. 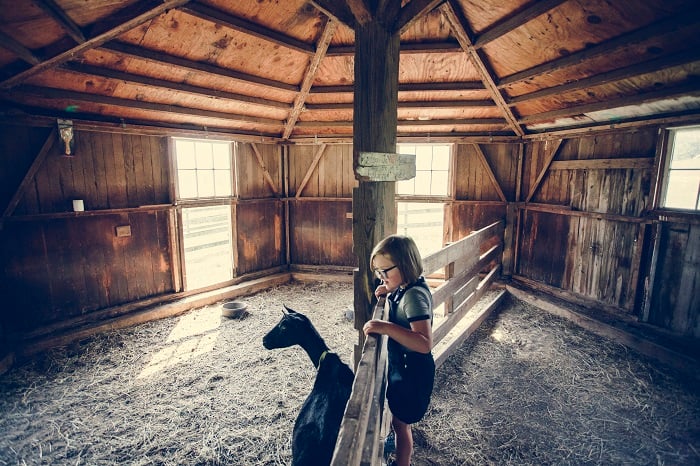 Can Goats Be Kept As House Pets?

Keeping even a miniature goat breed like a Nigerian dwarf or Pygmy goat as an indoor pet is simply not a good idea.

While some folks have successfully potty trained baby goats, they will feel too confined in such an unnatural environment and ultimately wreak havoc on everything they can either chew or climb.

It is not unusual for baby goats to come indoors temporarily if they need bottle fed, were born weak or sick, or because of intense inclement weather – or the death of their momma.

But, goats that are kept as pets really should live outside, for both their sake and your own.

Can Goats And Dogs Be Kept Together?

That being said (well … typed) I have allowed some members of my goat herd to hang out in the house for small amounts of time when they wander in with a dog or come to the back door demanding my attention and their nightly snack.

My first nanny goat Pearl, was a Nigerian dwarf and Pygmy goat cross breed. She was our only goat for a few weeks.

Being intensely herd animals, she and my Blue Heeler, Jovie, became the best of friends. They roamed everywhere together as Pearl followed me around like the most loyal dog.

Sometimes both Jovie and Pearl slept under the table at my feet while I wrote.
These best friends forever relationship ended as soon as Not Negan – Pearl’s Billy goat mate arrived on our survival homestead.

Pearl is one of those fickle girls that ditches their girlfriends when a cute “boy” arrives on the scene.

While goats and some (emphasis on the word ‘some’) dogs to get along, goats will prefer their own kind or other medium-sized livestock as companions.

If kept the majority of the time indoors and sharing space with a dog, bad behavior and in some cases, tragedy will strike.

Pearl was the victim of a dog attack over a year ago – the predator was not Jovie. Many folks recommended I put her down, but using my herbal care techniques and giving her regular shots of penicillin, Pearl pulled through – she one ear and the use of only three legs.

You would be shocked at how fast Pearl can get around on her three good legs. She can still use the fourth leg to help adjust her body to climb up on a tree to munch leaves and when kneeling.

She is still the leader of the growing goat herd and has had three more kiddings since the attack. Pearl was nursing her first kid when she attacked.

Thankfully her kid, Rooster, was nearly weaned but we still had to deal with supplementing her milk.

When you decide to keep goats as pets, you will need to adapt your home to them and not the other way around.

If you have dogs that run loose and are not established livestock guardian dogs, the canines could pose a deadly threat to your beloved goats. 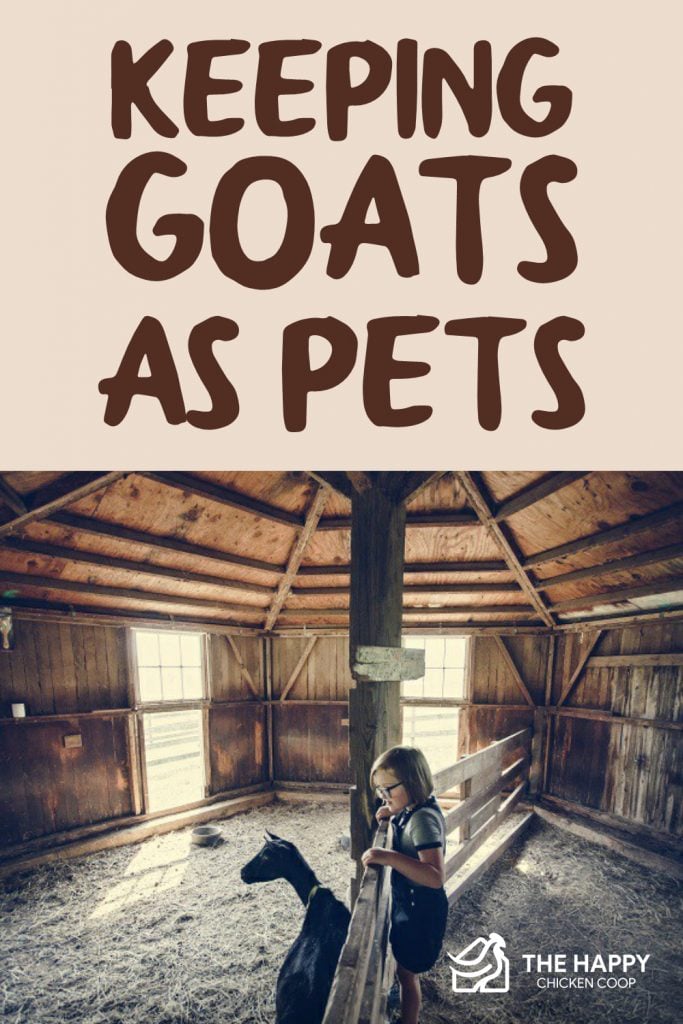 6 thoughts on “Keeping Goats As Pets”