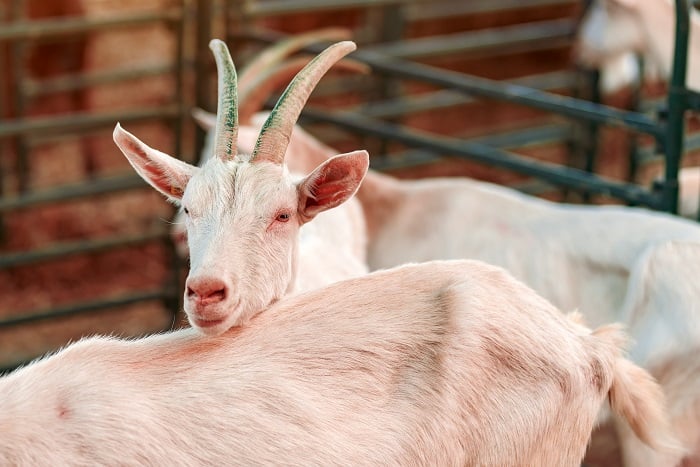 Dairy goat breeds range in size from miniature to standard size milk produces weighing in at well over 100 pounds.

Today we are going to walk through what we think are the best breeds of dairy goats one by one and let you decide which fits your needs!

While cows are the most popular dairy animal in the United States, goat milk has become increasingly popular recently – especially among folks who suffer from lactate issues.

During the early years of the 1900s, the dairy goat industry in the United States went through a period of intense growth as some top dairy goat breeds arrived in America from Europe.

The first official goat show was held during the 1904 World’s Fair in St. Louis.

One of the reasons the demand for goat milk has grown so substantially in recent years, in addition to cow milk allergy issues, is the growing trend for natural health and beauty products.

Wisconsin, New York, and Pennsylvania have the highest number of dairy goat ranches.

This is one of the most popular and readily available dairy goat breeds in the United States.

Nubian goats are easy to identify by their long floppy bell-shaped ears. This dairy goat breed is of mixed African, European, and Asian origin.

They have a high butterfat percentage that makes Nubian goat milk a top choice is cheesemaking.

Nubian goats have fine and short hair that boasts a glossy sheen. This dairy goat breed comes in a vast array of both solid colors and patterns. They produce roughly two to three quarts of milk per day.

This dairy goat breed is also often referred to as the “French Alpine” in breed registration books.

Alpine goats are among the largest of all prime dairy goat breeds. They have extremely erect ears in sharp contrast with Nubian dairy goats.

Alpine goats are known to be hardy in virtually any climate and have short to medium-length hair. Coloring ranges from all-white to white with blotches or markings in an array of common goat earth tone shades.

Alpine nanny goats produce between 135 pounds up to slightly over 2,000 pounds of butterfat-rich milk per year.

This dairy goat breed was created in California during the late 1920s. LaMancha goats are known to be docile and boast a friendly demeanor.

They are able to thrive in sparse environments and are sturdy enough to even double as a light pack goat.

They can produce up to three quarts of milk per day. Some LaMancha dairy goats can produce milk for up to 24 months without a need to be bred again.

They come in an array of common goat colors and have a short and glossy coat.

This miniature  breed is a perfect dairy goat for a small farm, ranch, or homestead.

The Nigerian Dwarf arrived in the United States from Africa alongside Pygmy goats that were making the trip as feeder animals for some large cats being delivered to American zoos.

A small herd of both breeds of miniature goats was kept at the Gladys Porter Zoo near Brownsville, Texas after surviving the journey.

They were initially nothing more than a popular petting zoo attraction until separated into distinct breeds and cultivated for meat and dairy purposes by two female local goat keepers.

Nigerian dwarf goats have short to medium hair that is rather coarse. They come in an array of common goat earth tone colors, but brown tends to be a prominent coloring.

These miniature goat powerhouses can deliver up to three pounds of milk per day, on average.

They are a very friendly and easy to handle goat, making them a popular choice for showing by young 4-H members at county fairs.

These Swiss dairy goats are of a medium size with a docile and intelligent personality.

Toggenburg goats are usually solid in color and come most commonly in shades of brown. They have fine and soft hair that ranges from short to long in length.

The coat of members of this dairy goat breed often sport two white stripes down their faces and legs. Sometimes a triangular shape in a white to cream shade is present on the sides of their tail.

This top dairy goat breed also hails from Swiss ancestry. Oberhasli is a medium-size dairy goat that free-range and roams large pasture areas well due to its alert nature.

These quality dairy goats are often black, but light to deep red is not only more common but preferred by keepers who want to show or register their goats.

Some black stripes on the face and white hair on the ears are also not uncommon.

Oberhasli nanny goats typically produce between one-half to one and a half gallons of milk per day.

These medium-size Swiss dairy goats are big bones and can withstand living in extremely rugged conditions.

Members of this breed are often white or a light cream color with tiny spots of colored peppering in their hair – but this type of hair is not favored by breeders who show their goats.

Due to the large milk production capabilities of this breed, along with their docile and sociable nature, members of the Saanen breed are becoming more popular on medium homesteads and large ranches, alike.

The Sable dairy goat is often incorrectly referenced as a cross-breed, but it is not. These stout milkers were created from distinctive breeding with white Saneen goats that are deemed a formal breed in their own right.

Sable goats can range in color from white to cream, tan, and even black.

The first Sable dairy goats arrived in the United States at the same time as their Saneen peers. On the same ship, as a matter of fact – which may have caused the initial breed confusion just as it did with Nigerian Dwarf and Pygmy goats.

Sables do not have the same light skin as Saneen dairy goats, making them far more hot climate hardy and skin cancer-resistant than Saneen goats.

These quality milkers are capable of producing between 610 and 5,490 pounds of milk annually.

This modern dairy goat breed was developed using rare genetics from the Golden Guernsey goats, a registered breed with the British Goat Society.

They are medium in size and have ears that are erect and turned slightly forward that makes them appear to be a bonnet on the head.

The coat color on Guernsey goats colors varies in shades of cream, from bronze to a dark russet, to the show breeder favorite – gold.

The coat har ranges from short to long and tends to flow slightly away from the body to create a slightly fringed look.

Goats of this breed have only a moderate daily milk yield of about 5 pints, but its rich butterfat and protein content make it a delight to those who consume it and a highly marketable dairy goat product. 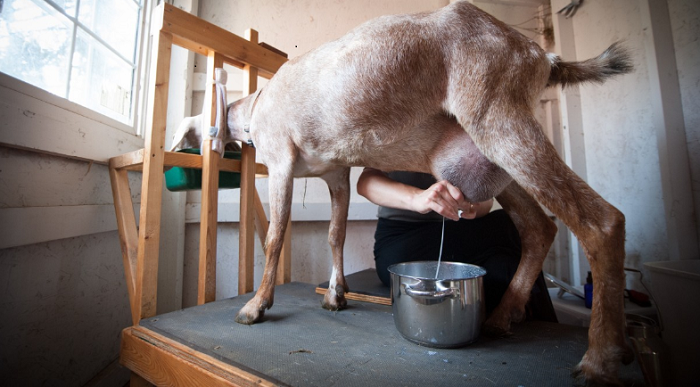 Mature female dairy goats cannot be milked until they have produced kids. Once a doe produces kids she is considered a nanny goat.

The prime milking period is right after the kids have been born and is called the “freshening” time of the milk cycle.

It is possible to milk a goat while she is still nursing one or more kids – typically. A nanny goat is capable of holding back enough of her milk to satisfy her nursing needs while being milked.

But, it is usually a top-quality dairy goat breed that can routinely produce enough milk for both her kids and keepers at the same time.

A good dairy goat should be able to provide milk for 12 months, as long as she is milked daily. When the nanny goat gets closer to the end of her milking cycle the milk will develop both a sour taste and smell.

This milk can still be consumed and used in food or product recipes but is usually pitched due to its unfavorable salty taste and scent.

A top-quality milk goat should be able to provide her keepers with at least six but up to 12 pounds of milk per day during her lactation period.

The only exception to this rule applies to Nigerian Dwarf goats who tend to provide less quantity but still offer high-quality sweet-tasting milk.

To ensure the family will constantly have a fresh supply of milk on hand, especially if raising a miniature dairy goat breed, keep a three nanny to one Billy goat ratio.

But, cattle take up far more space to house, and feed, and almost also require a more substantial investment when purchasing.

We hope this guide of dairy goat breeds was helpful.

All in all every one of these goats deserve a home. In my opinion, I love my alpine and my nubian goat breeds.

Let us know in the comments below which of these is your favorite! 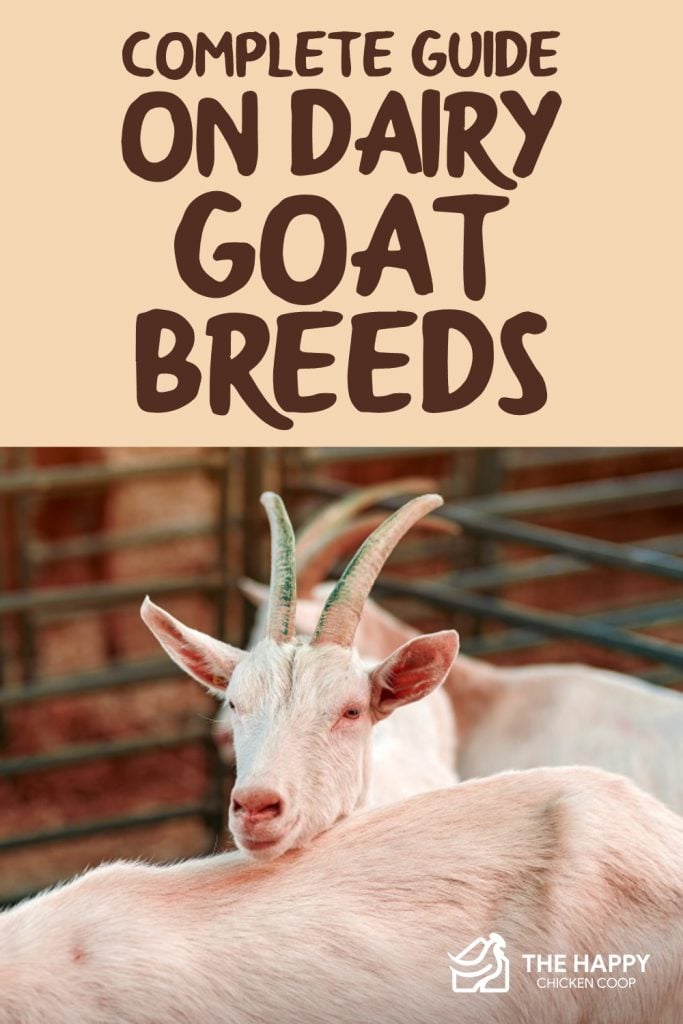