Feeding Alfalfa to Goats: The Pros and Cons 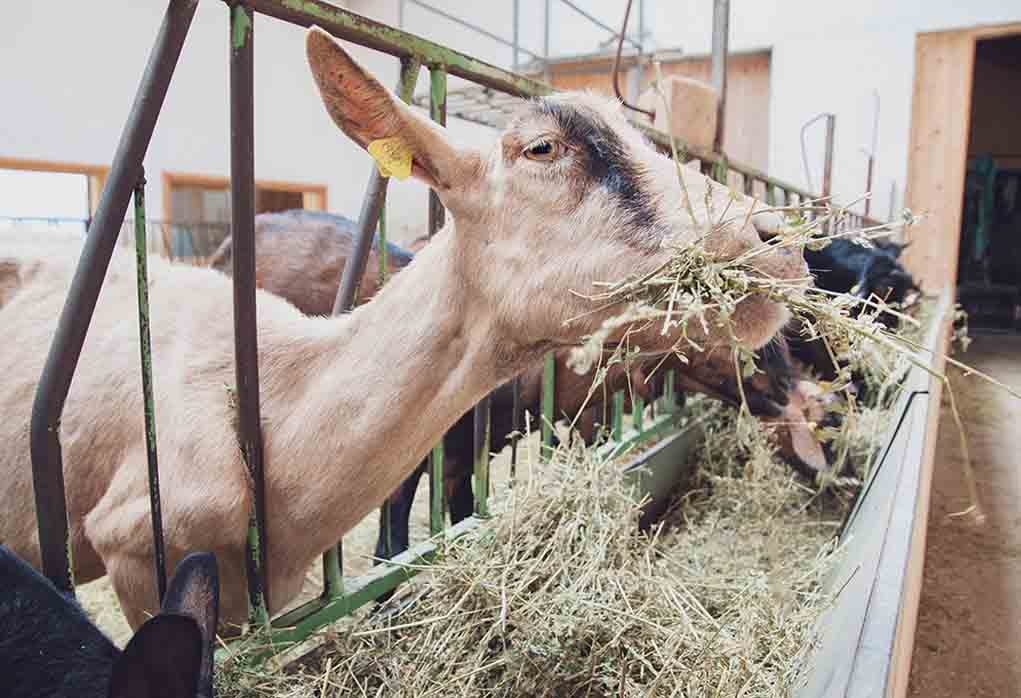 Alfalfa hay is a nutritional powerhouse for goats and is available at most feed stores. But what about alfalfa for goats precisely? What should you know before feeding your goats this hay?

There’s a lot of conflicting information about feeding alfalfa to goats. Some people swear by it, while others claim it’s dangerous for their animals.

So, what’s the truth? Is it good or bad for goats? We’ll break down everything you need to know about feeding alfalfa to your herd in this post.

We’ll cover the benefits and the potential risks, so you can decide whether or not to feed alfalfa to your goats. Let’s get started! 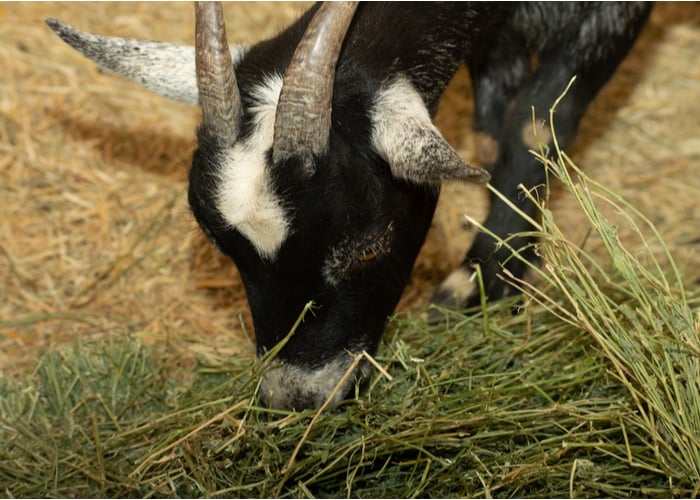 Feeding Alfalfa to Goats: The Pros and Cons

Are you thinking about feeding alfalfa to your goats? Weigh the pros and cons first.

The Ins and Outs of Feeding Goats

First, let’s tackle this question. What should you be feeding goats in the first place?

Goats eat plants and digest them via a four-compartment stomach as ruminant animals.

They’re like deer because they can eat “less desirable” plants like forbs, weeds, and brush, unlike other grazing livestock, like cattle and sheep (who eat mostly grass).

For this reason, many people choose to raise goats in the first place. They can forage on practically anything, including woody shrubs and rough, overgrown land sessions.

That works just fine in the summer, but what about winter? Most people rely on feeding their goats forage or hay.

This usually consists of grass or legumes. More often than not, that legume is alfalfa. You can read more about the proper goat diet here.

Benefits of Feeding Alfalfa to Goats

Alfalfa hay is a popular choice for goat farmers who need some sustenance to help their animals get through the winter.

Hay is necessary for a goat’s rumen to function correctly. Without it, your goats will have major digestive issues.

Alfalfa hay is a popular option because it has a higher content of minerals, vitamins, and even protein than most grass hays.

Because of this, it’s a great option for feeding milking goats and those who are pregnant. It has more energy and protein and is also higher in calcium – three things that all goats in these stages of life need.

Alfalfa is the only hay with enough protein to meet the nutritional requirements of a lactating doe.

It would help if you started feeding alfalfa in the early to mid-winter or when your does are in early pregnancy (about six weeks before kidding).

This will ensure that your doe has the nutrition necessary to get her through the rest of her healthy pregnancy and support decent milk production.

It can be problematic to feed too much alfalfa all at once – or to switch to alfalfa hay abruptly. A sudden change can lead to a significant digestive upset.

Instead, it would help if you introduced alfalfa hay slowly and in small increments so that the bacteria in the goats’ rumens have time to adjust.

Disadvantages of Feeding Alfalfa to Goats

Some people are hesitant to feed their goats alfalfa out of the fear of developing urinary calculi. It’s important to note that this can and does happen.

Urinary calculi are most often caused by too little water intake and overfeeding of grain. Alfalfa can exacerbate the issue.

An easy way to avoid these problems is to ensure your goats always have access to clean fresh water. Limit feeding grain since, for most goats, it’s not a dietary necessity. Instead, grain should be used only as an occasional treat.

One other important thing to note about alfalfa hay is that although it is incredibly high in nutrients, you can still have too much for a good thing.

Most excerpts recommend feeding alfalfa in small doses. It’s high in calcium and protein, and while that’s a good thing, you don’t want to overdo it.

Stick to small quantities. In some cases, you may want to reserve the alfalfa for sick, pregnant, lactating, or injured animals. Plus, alfalfa is expensive. That’s why so many people buy it in a concentrated pellet form. 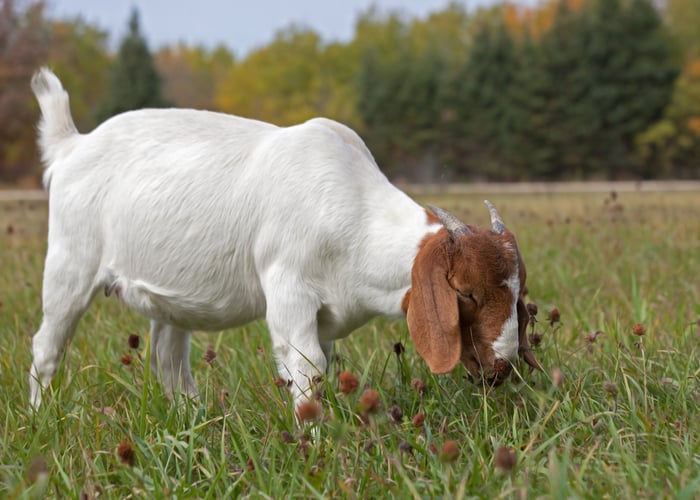 The good news is that bloat isn’t nearly as typical in goats as in other ruminants, like sheep and cattle. Also known as ruminal tympany, this potentially life-threatening condition comes in frothy bloat and free gas bloat.

There’s no single cause when it comes to bloat, but usually, it has to do with something in the diet.

The consumption of lush legumes, like alfalfa or clover, is a common culprit. You may also find that your goats suffer from bloat if they turn out in pastures that are still wet or those composed solely of legumes.

It’s almost always related to overeating and can also be connected to consuming grain, carrots, or apples.

If your goat is bloating, you’ll notice symptoms like losing appetite, restlessness, and salivation. He may become distended on the left side.

Bloat can be hard to treat and often requires veterinary treatment since a stomach tube will need to be inserted. Sometimes a drench of mineral oil or poloxalene can help.

Ultimately, it’s far easier to prevent bloat than to treat it. Although alfalfa is safe (and even recommended) to feed goats, you need to exercise caution.

Please don’t feed your goats a lot of alfalfa all at once, or they may bloat.

Goats love eating alfalfa, and they get quite a bit of benefit from it, too. Again, moderation is key. 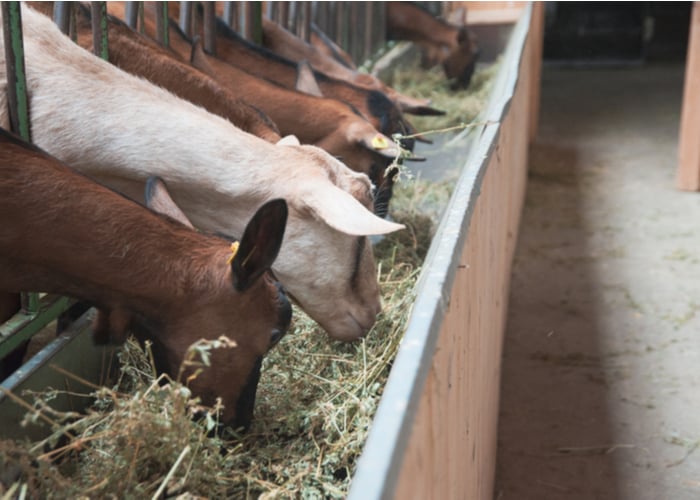 How Much Alfalfa to Feed a Goat

It would help if you did not feed alfalfa out of free choice. Goats enjoy eating alfalfa and will go, as they say, hog wild for it!

Instead, portion it out in flakes. Consider using a combination of grass hays and alfalfa to provide your animals with the right amount of orange and protein to help encourage healthy digestive action in the rumen.

You can increase the alfalfa you give to a doe (and add grain for extra calories). The alfalfa hay’s added nutrition may help prevent issues like acidosis or pregnancy toxemia.

You can purchase alfalfa in bales, but it’s often sold in concentrate form.

These are also known as pellets and are far more affordable for most farmers since the pellet form makes it much harder for the goats to waste.

Alfalfa pellets are commonly available at livestock feed stores, as are timothy pellets and other grass pellets.

Some brands sell pellets specific to the animal – i.e., goat pellets vs. horse pellets. They are usually the same, but the pellets are sized specifically to the size of the animal’s mouth.

What is the Best Hay to Feed Goats?

There are several different categories of hay you can feed to your goats. While none of them is technically “better” than another, it’s important to note that there are certain times at which certain feeding types of hay are more appropriate.

Common types of hay include:

You can also feed a mixture of these hays.

There are some regional variations to this. While timothy is more common in northern areas, you’re more likely to encounter orchardgrass in your hay mixes if you live in the south.

Because of this variation and variations in the fertility and nutritional quality of the soil, the nutrition of hay can also vary. The protein content and ADF should be below 35% for a goat.

Of course, it can be challenging to know how much protein your hay has without having it tested in a laboratory.

In general, you’ll find that leafier hays tend to have much more nutrition than “stemmier” ones.

Alfalfa is one of the most nutritious options for goats. Clover is another option, as is timothy, meadow grass, and fescue. 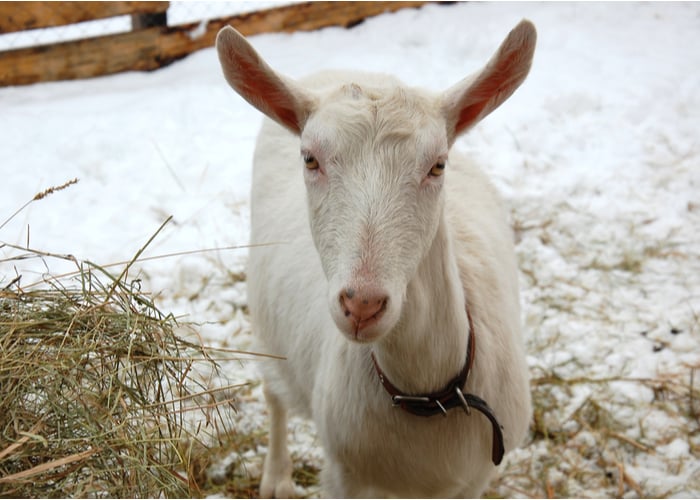 Best Hay for Goats in Winter

In the wintertime, you’ll more or less want to keep up with the same feeding regimen that you had your goats on during the rest of the year.

However, you may need to up the rations slightly to ensure that your goats get all their nutrients.

During the winter, goats need more calories to help them maintain a healthy body temperature and a good body weight.

They still need roughage, too, especially when you consider that there will be no opportunity for them to browse on pasture or other forage.

Alfalfa hay can be an excellent source of those extra calories and protein that your goats need to stay healthy in the winter months. Again, though, you need to feed this in moderation.

Alfalfa hay is an excellent choice for most goats – but when feeding male goats, you may want to ease back on the portions or consider not feeding it out.

As we mentioned earlier, when fed in excess, alfalfa hay can lead to the formation of urinary calculi because it contains so much calcium.

While this isn’t common in female goats (does) who are pregnant or lactating, it often occurs in dry does (those who are no longer producing milk or pregnant), bucks, and wethers.

These animals don’t need as much calcium as a doe who is pregnant or producing milk. Not only that, but calcium binds with zinc.

That means that a goat can get way more calcium than it needs and wind up being deficient in zinc.

You can feel free to feed fast-growing kids alfalfa hay – even the male ones. You can provide it until goats reach about six or seven months old.

Then, you can transfer the males over to grass hay.

Grass hay is a reasonable alternative to alfalfa hay, mainly if you’re talking about rams or wethers. Hay is suitable for all goats – at least, it’s good when it comprises at least part of their diets.

It’s the only hay that dry does, bucks, and waiters should have. There aren’t too many risks with feeding plain grass hay, so you can provide this free choice.

You don’t have to ration it like you do the alfalfa hay.

Not all goats love grass hay – most are going to prefer grain or alfalfa. Again, though, these are two things that you should feed in moderation to ensure that your goats are getting everything their bodies need.

Remember that goat feed like grain is entirely unnecessary when it comes to grain. Grain can help goats put on a bit of weight and be of particular benefit when your goats are lactating or pregnant.

However, it can cause severe digestive issues like bloat, diarrhea, enterotoxemia, and death if provided to your animals free choice.

Alfalfa is an excellent feed option for goats, but it’s essential to understand the nutritional needs of your animals and provide them with a diet that meets those requirements.

Again, alfalfa is high in protein and fiber, making it an ideal choice for goats raised for meat or milk production.

If you have any questions about feeding your goat’s alfalfa or other feeds, consult with your local agricultural extension office or your veterinarian.