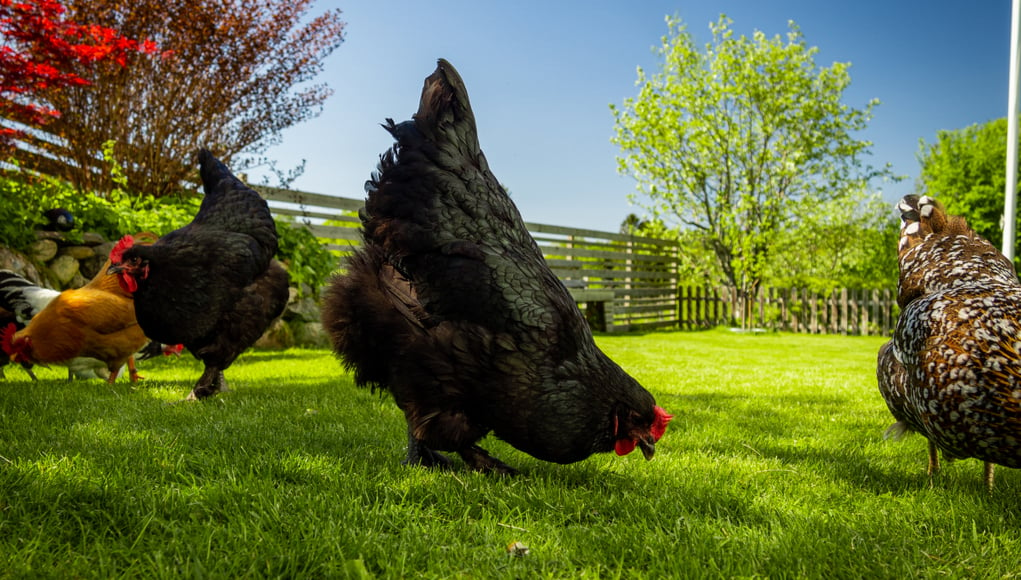 Do you know what the Langshan chicken breed is?

The Langshan is a Chinese chicken breed that is known for its black feathers and white skin. It is also said to be one of the oldest chicken breeds in the world.

If you’re interested in learning more about this interesting breed of chicken, keep reading!

Langshan chickens are a breed of chicken that is originally from China. The breed gets its name from the Langshan Mountains, where they were first discovered.

Langshans are large birds, with roosters typically weighing in at around 9 pounds and hens around 7 pounds. They are known for their long, elegant necks and tails, as well as their black plumage.

While they are not the most popular breed of chicken in the United States, they are gradually gaining in popularity due to their unique appearance and friendly disposition.

If you are looking for a chicken that is sure to stand out from the rest, then the Langshan is an excellent choice.

Langshan chickens are hardy in the winter, though they aren’t particularly hardy. They are known for being particularly docile, which is one of the reasons why they are commonly raised as exhibition birds.

Langshan chickens are known for being great fliers (they can fly over tall fences!) and a great depth of body that is unique to the breed. It is an excellent layer and a good forager.

Because it has fewer feathers on its toes, unlike Cochin or Brahma chickens, it does better in wet weather than these two breeds.

There are a couple of different variations of this breed that breeders strive to achieve. One is a short-legged version, known as the Shanghai type, while the other is the taller version or the German Langshan.

Langshan chickens are quite striking to look at. The eggs sometimes have a purplish tint, while the chicken itself has white skin, dark black feathers (sometimes a bluish-black color), and super tall legs.

The white meat is rich in flavor and the bones are small for the size.

This hardy breed has tight feathers and dark brown eyes. Its toes and shanks are blue-black with some pink between the scales. It has white soles.

The chicken has a single comb and lays medium-size brown eggs (usually around three eggs each week). 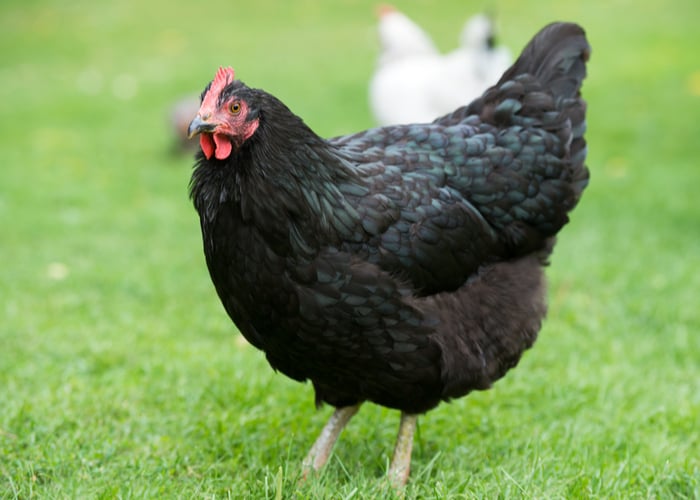 History of the Langshan Chicken Breed

The Langshan is an Asiatic breed of chicken originating in the Guangdong province of southeastern China.

The breed was first imported to the United States in 1872 and quickly became popular among American farmers for its large size and dark plumage.

Langshans are known for their distinctive long and elegant neck, which is said to be the result of generations of inbreeding.

The breed is also characterized by its deep chest and sloping back, which gives it a unique appearance among other chicken breeds.

While the exact origins of the Langshan are unknown, it is thought to be a descendant of the ancient Chinese silkie chicken.

Today, the breed is still popular among backyard chicken enthusiasts and continues to be used for meat production in some parts of the world.

While they were once quite common in China, Langshan chickens are now considered to be a rare breed. In recent years, there has been a renewed interest in Langshan chickens, and they are now being bred in other countries as well.

While they are not yet as common as some other breeds of chicken, their numbers are slowly but steadily increasing.

There are a few variations of this breed, too. The original Langshan is black with a green sheen to its feathers.

Later, the white Langshan was developed in English. The blue followed shortly after. There are also bantam Langshan chickens in all three of these colors.

Langshan chickens are a breed of chicken that is known for being particularly friendly and docile. Because of their gentle nature, they make great pets and are often considered to be “lap chickens.”

They also tend to get along well with other animals, making them a good choice for homesteaders who have multiple types of animals.

In addition to being excellent companions, Langshan chickens are also good egg-layers and can provide a steady supply of fresh eggs.

For all of these reasons, Langshan chickens are a popular choice for those looking for a friendly and reliable chicken breed.

What Are Langshan Chickens Raised For?

Langshan chickens were originally bred for their meat, but they have also gained popularity as exhibition birds and as layer hens due to their large size and beautiful plumage.

Langshan chickens typically weigh between 7 and 8 pounds, making them one of the larger chicken breeds.

They are also known for their black feathers, which give them a striking appearance.

In addition to their meat and eggs, Langshan chickens are also valued for their feathers, which are commonly used in millinery and fly-fishing.

They can also be raised for eggs. They are a general-purpose chicken breed that can be kept on any kind of land.

In fact, this is one of the few Asiatic chicken breeds that can be raised in southern portions of the United States. While it does better in cold weather, warm weather can be tolerated in many cases, too.

They rarely become broody. While they aren’t determined sitters, if they do lay their own eggs, the hens will be excellent mothers. These hardy chickens are fast-growing and hold up to confinement well. 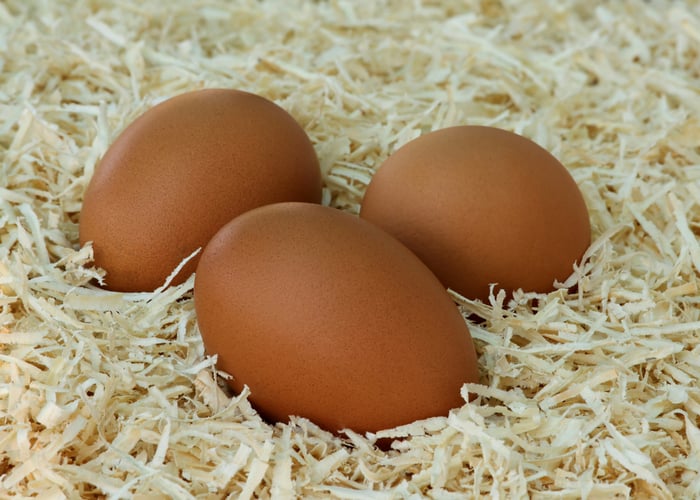 Another distinct feature is the color of their eggs. Langshan chickens lay dark brown eggs.

This is a relatively rare color for chicken eggs and it can be quite striking. The dark brown color is the result of a genetic mutation. However, the blue eggs are not always perfectly dark brown

They can sometimes have a greenish tint or even spots of lighter brown. Nonetheless, Langshan chickens are prized for their beautiful eggs.

While Langshans are not as popular as some other egg-laying breeds, such as Leghorns or Rhode Island Reds, they make excellent backyard chickens and can be a great addition to any flock.

Langshans are calm and docile birds, and they tend to do well in hot weather. They also have very strong immune systems and are resistant to many common chicken diseases.

In terms of egg production, Langshans are reliable layers and will often produce more than 200 eggs per year. The eggs themselves are large and have a deep brown color.

If you are looking for a chicken that is both beautiful and productive, then the Langshan is a great choice.

Langshan chickens are slow-growing so you won’t get eggs right away. So, you will need to be patient!

However, once these birds start laying, they’ll lay reliably after six months and will continue to be prolific layers late into their lives.

Plus, the eggs, with their brown-purple coloring, are definitely worth waiting for!

Can You Raise Langshan Chickens for Meat?

Langshan chickens are a popular breed of chicken that is known for their white meat and flavorful skin. The breed is also known for being fairly large, which makes it a good choice for those looking to raise chickens for meat.

While Langshan chickens can be raised for meat, it is important to keep in mind that they are not the most efficient producers of meat.

The chickens tend to be quite slow-growing, which means that it takes longer for them to reach slaughter weight.

In addition, the birds typically have a higher feed conversion ratio, meaning that they require more food in order to produce the same amount of meat as other chicken breeds.

Because these birds are slow growers, it can take them much more time to get to their full size and start laying than other breeds of similar backgrounds.

As a result, raising Langshan chickens for meat can be a more expensive endeavor than raising other types of chickens. 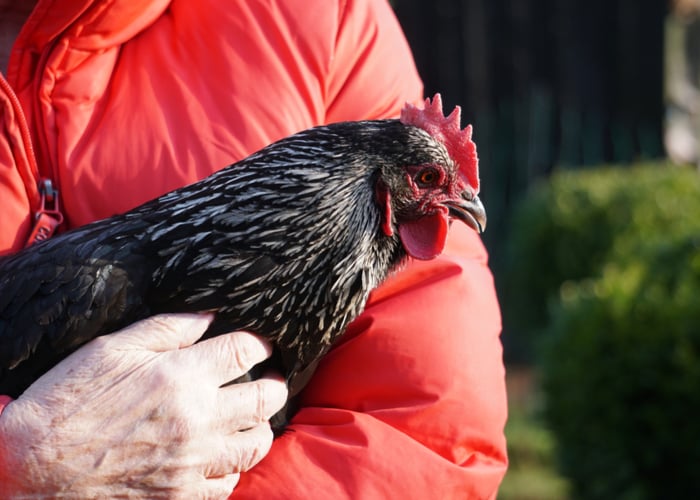 Langshan chickens are a popular breed of chicken known for their attractive appearance, but they are also susceptible to health problems.

One common issue is bumblefoot, a bacterial infection that causes swelling and redness on the feet. In severe cases, the infection can lead to lameness.

Chickens with bumblefoot may also be more prone to other health problems, such as arthritis.

Another issue that affects Langshans is prolapse, which is when an internal organ, such as the uterus, prolapses through the vent. This can be a life-threatening condition if not treated promptly.

In addition, Langshans are susceptible to Marek’s disease, a viral infection that causes paralysis and death in young birds.

While there is no cure for Marek’s disease, vaccinated chicks have a higher chance of surviving exposure to the virus.

Consequently, it is important to be aware of these health issues when considering raising Langshan chickens.

If you’re thinking about getting chickens, you may want to consider the Langshan breed. These birds are known for their long, elegant tails and black feathering, and they make excellent egg layers.

However, there are also a few things to keep in mind before you make the commitment.

For one, Langshans are known to be quite active, so they may not do well in a small backyard coop. In addition, these birds can be prone to health problems if they’re not kept in clean conditions.

Overall, the pros and cons of raising Langshan chickens should be carefully considered before making a decision.

But if you have the space and are prepared to care for them properly, these beautiful birds can make a wonderful addition to your home. 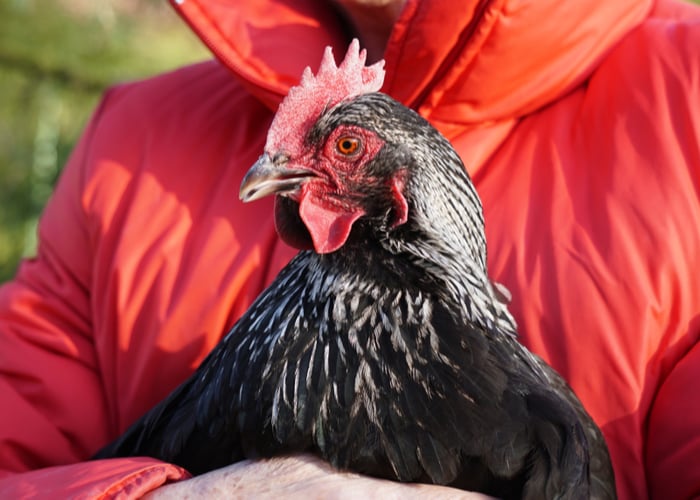 How to Care for Langshan Chickens

Chickens are a common sight on many farms, and there are dozens of different breeds to choose from. One popular breed is the Langshan chicken.

These stately birds are known for their long tails and elegant carriage. They are also active foragers and make good watchdogs.

If you’re thinking of adding some Langshan chickens to your farm, here are a few things to keep in mind.

Langshan chickens are a popular choice for many chicken enthusiasts, due to their docile nature and beautiful feathers. While they are not the most active breed, they still require a well-balanced diet in order to stay healthy.

A good diet for a Langshan chicken should consist of quality commercial chicken feed, supplemented with fresh fruits and vegetables. spinach, kale, and other leafy greens are particularly good for this breed.

In addition, Langshan chickens enjoy occasional treats such as mealworms or crickets.

By providing a healthy diet, you can help your Langshan chickens stay happy and healthy for years to come.

These chickens do best in cold weather. They originated in China, where winters can be brutal. So, if you live in a colder climate, they may be a good choice for you.

Second, they are not particularly broody. This means that they won’t sit on their eggs and hatch them themselves.

You’ll need to incubate the eggs if you want them to hatch. Finally, they are known for being good layers of large brown eggs.

If you’re looking for a chicken that will provide you with lots of eggs, the Langshan is a good option.

Langshan chickens are a breed that originated in China and is known for their black feathers.

They are dual-purpose birds, meaning they can be used for both meat and eggs. Langshans are considered to be good layers of large eggs, and their meat is flavorful.

If you’re interested in learning more about this chicken breed or raising them yourself, hope this guide will help you know more about Langshan chickens before deciding on adding them to your flock!

READ NEXT: 14 Black Chicken Breeds You Can Easily Raise