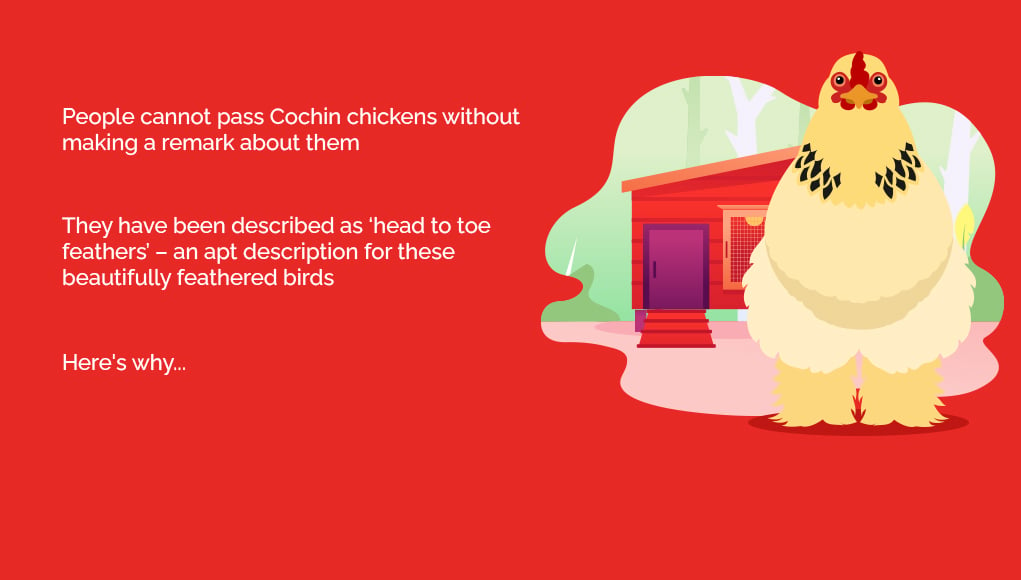 The big, fluffy Cochin chicken begs to be picked up and cuddled! They have been seducing people for a long time and aren’t about to stop anytime soon!

They have been described as ‘head-to-toe feathers’ – an apt description for these beautifully feathered birds. People cannot pass them by without remarking on them.

These sweet fluff balls also have quite a bit of history, so sit back and read the story of the Cochin chicken.

We will walk you through their history, recognized varieties, general disposition, and health issues before outlining if they’re the right hen for your flock!

History of the Cochin Chicken

The Cochin first came to be noticed in the 1840s. They were originally called ‘Cochins-China.’

In fact, we imported them from a French colony in what is now Vietnam – so oriental, but not very Chinese!

The original ‘Cochins’ that were imported looked nothing like today’s Cochin. They looked more like Jungle Fowl or Malays. They were tall and rangy and not overly pretty to look at.

These original Cochin were given to Queen Victoria by Captain Edward Belcher.

Queen Victoria loved them – she was quite the poultry enthusiast and built a special enclosure for her beloved Cochin-Chinas. This started what was to be become an obsession for many Victorians: ‘hay-fever.

By this time, ‘hen fever’ had taken over the UK and US, fueled by the development of the Brahma and Cochin birds. ‘Exotic fowl’ such as these could be bought and sold for hundreds of pounds or dollars!

The original Cochins were delicious layers by all accounts. However, once ‘The Fancy’ (poultry enthusiasts) started to breed to human specifications, the utility of the breed suffered.

They became prettier but laid fewer eggs, and the meat became coarser, a fate that has befallen many of today’s breeds.

It is tough to tease out which birds may have been crossbred with the Cochin. It is unlikely to have been any English stock since most British hens before this time were nothing to write home about being straggly and unattractive.

The most likely scenario would have been crossing between different sets of imports from China and perhaps Europe to obtain the required ‘look.’

The Cochin was recognized in the British Poultry Standard of 1865 – the first edition of the Standard that was issued.

It followed closely in the US, being in the American Poultry Association standard of 1874, again, the first issue.

It is classified as one of the three Asian classes in both books – the other two being Brahma (also from Shanghai) and Langshan from China also.

There are both standard-sized fowl and bantam varieties. In England, Cochin bantams do not exist – they are classified as Pekin bantams.

Cochins can take up to two years to mature since they are slow growers. When they are fully grown, the male can weigh in at 11 pounds, with the female weighing around 8 ½ pounds. The bantams weigh in at 30oz. For the male and 26oz. For the female.

The acceptable colorings for this breed vary from the US to the UK. The UK recognizes the following colors:

The USA recognizes in addition to the above colors:

The US does not recognize the cuckoo – a great shame since the coloring is so bewitching! 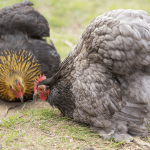 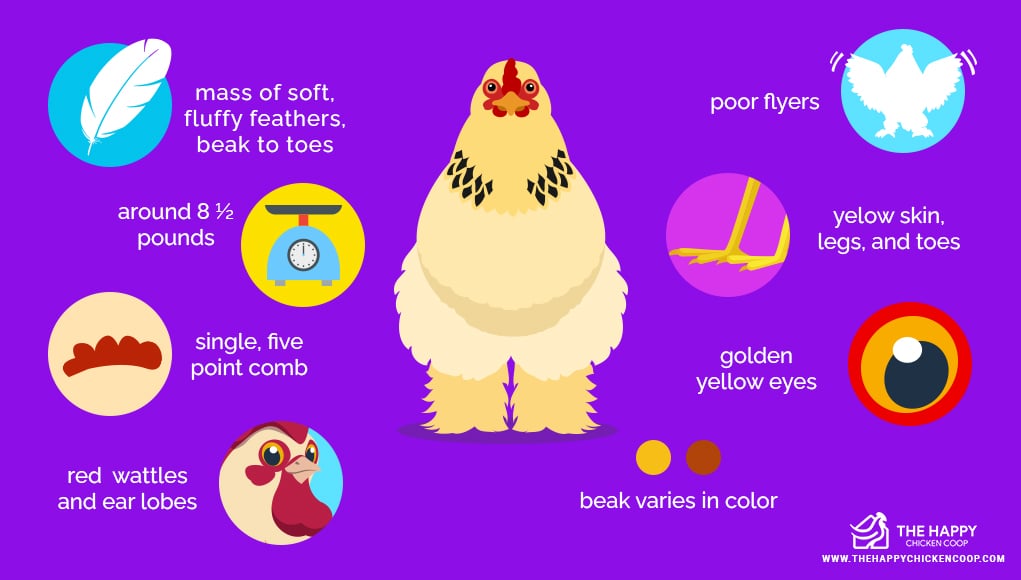 The Cochin appears as a mass of soft, fluffy feathers, beak to toes almost literally! The legs and outer toes should be fully feathered so that they saw from the side. You cannot see toes – only feathers.

The fullness of the feathering gives them the appearance of being much larger than they actually are. Still, they are quite hefty when full-grown, a hen being around 8 ½ pounds.

The Cochin wears a single, five-point comb which should be read, as are the wattles and ear lobes. The eyes are a golden yellow. The beak varies with the overall color of the bird. Anywhere from yellow/horn to black/horn – the darker the bird, the darker the beak in general.

The legs and toes should be yellow, as is the skin.

Legs and toes should be fully feathered, effectively hiding the legs and most toes. Only the inner toe and part of the middle toe of each foot should be visible.

The silhouette can be described as a rounded heart shape. The tail is fully feathered, but the feathers are somewhat shortened in appearance.

Apart from fantastically fluffy, Cochins can also be frizzled.

The Cochin is considered a large breed of chickens. If you’ve seen the viral videos of large chickens bombing around their runs, the Cochin may be the chicken you’ve seen…or their cousin, the Brahma.

Their large bodies make Cochins poor flyers and easy pickings for predators, making sure you keep them in a safe space.

In many countries in Europe and Australia, a frizzle chicken is recognized as a distinct breed, an interesting concept.

Certain breeds are more prone to frizzling than others – Cochins and Polish being two of the most well-known.

No one really knows where the frizzle gene came from, but it is first mentioned in writing from Aldrovandi in 1600.

They were also mentioned in correspondence by Charles Darwin in which he calls them Caffie Fowl. He said they were predominant in India, but it’s hard to know where this information originated since he never visited India.

Initially, the frizzle birds were restricted to the Far East, East Indies, and Africa, but once noticed, were taken to the UK and US, where breeding began in earnest.

The frizzle gene – an incomplete dominant, causes the feathers to curl forward instead of lying flat and meshing together as they normally would.

A frizzle should never be bred to another frizzle – this makes a ‘frazzle.’ Frazzles have extremely delicate feathers and can, in some cases, be almost bald or exhibit patchy feathering. They do not survive very well without constant care and attention.

Frizzled birds do not tolerate the cold well since the curled feathers do a poor job of insulating the hen or even protecting it from the rain or snow. They also cannot fly, so perches need to be set lower for them to access. Otherwise, they pile on the floor.

Needless to say, frizzles do get picked on by the more dominant hens, so bullying and feather picking can quickly become a problem unless it is carefully watched.

Cochins are calm, friendly birds. Even the roosters are known for being fairly mellow. The boys rarely get aggressive, mean, or quarrelsome.

However, the bantam boys are not so mellow – they can be feisty, aggressive, and fight for territory.

Ladies make great broodies and Moms. They will happily sit on any eggs you give them once they are in the mood. They can also be used as foster Moms for abandoned chicks, but I think this would depend on the individual bird and whether or not she is broody at the time.

They are easily contained since they are poor flyers. Apparently, a two-foot fence will contain them easily.

In terms of confinement, they tolerate it well, but if allowed to free-range, they will spend most of their time hanging out by the feeders – they tend to be lazy.

The tendency towards laziness and obesity makes them easy targets for predators, so they should remain in a fenced area safe from predation.

They aren’t well known for their laying eggs. You will be lucky to see 180-200 eggs/year from these ladies, but the good news is that, like the Brahma, these ladies prefer to lay through the winter months!

The eggs are described as small to medium size, brown in color, although some folks report them as moderate to large eggs. 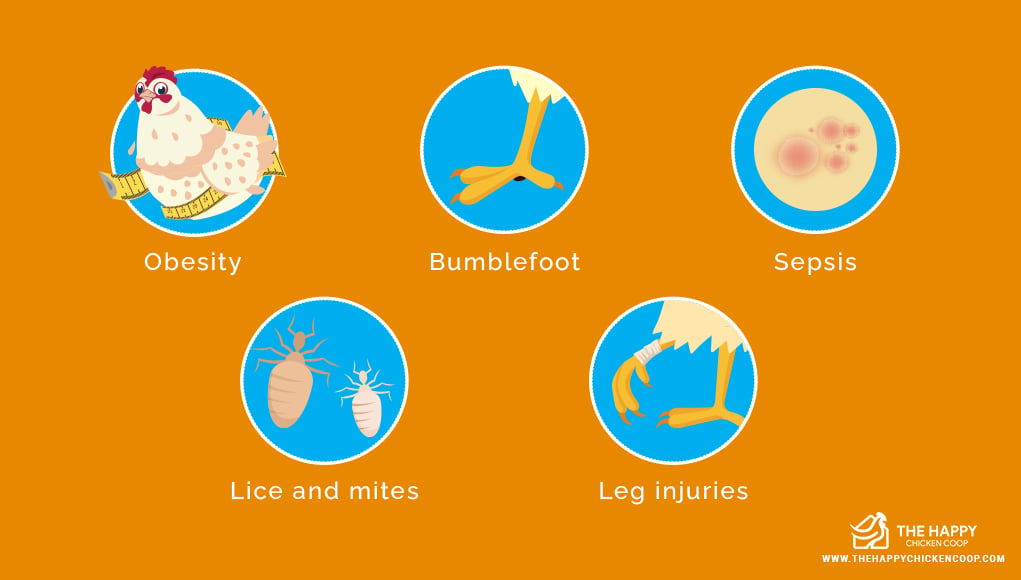 Cochins are prone to obesity. They are mellow, lazy hens and do not forage very much, preferring to eat what’s right in front of them. Given their size, lower roosts are to be preferred to prevent leg injuries.

Many experts recommend that Cochins be rationed in the amount they are allowed to eat. If you have a mixed flock, this could not be easy to monitor, so weighing the hens periodically is a good idea.

As with all really fluffy hens, you must regularly check external ‘residents’ such as lice and mites.

Cochins seem to be healthy birds and can live up to around 10 years other than these concerns.

Cochins are prone to getting bumblefoot due to their large size. Hopping down from roosts and landing hard on sharp objects can cause injuries and eventually lead to bumblefoot, sepsis, and possibly death.

To prevent injuries, keep roosts near the ground so the distance they must jump to get down isn’t as far, and therefore, the chicken will have a softer landing.

Is The Cochin Right For You?

If you are looking for a hen that is more of a pet than a ‘working girl,’ the Cochin maybe your ideal bird.

They are not great layers but make fabulous pets and lap chickens. They are well suited for children as they are friendly and extremely mellow, even the roosters.

They can become very tame and tolerate a wide variety of situations. Pictures of Cochins in hen strollers have circulated on social media for some time!

They are also an excellent material for exhibitions and shows since they are tolerant and straightforward to handle. They always seem to attract a crowd at the shows, too, with their profusion of feathers and personality – especially if they are frizzled!

The Cochin has won a place in many hearts simply because of the fluffiness of the feathers and a gentle disposition.

Many people keep them as ‘house chickens,’ pets, or pretty yard ornaments.

If you want a perfect egg layer bird, the Cochin is not for you.

If you would like a chicken that lays through the winter when the other hens take a break, then the Cochin fits the part well.

The Cochin will ‘break’ from egg-laying when the weather turns warmer, much like the Brahma hens.

They are wonderfully calm and laid-back birds to have among your flock.

If you keep Cochins, let us know in the comments below, we always enjoy hearing from you…

READ NEXT:  Poultry Netting: Best Kind To Buy and How Much Do You Need?