The Pecking Order: What Is It and How to Avoid Problems in Your Flock 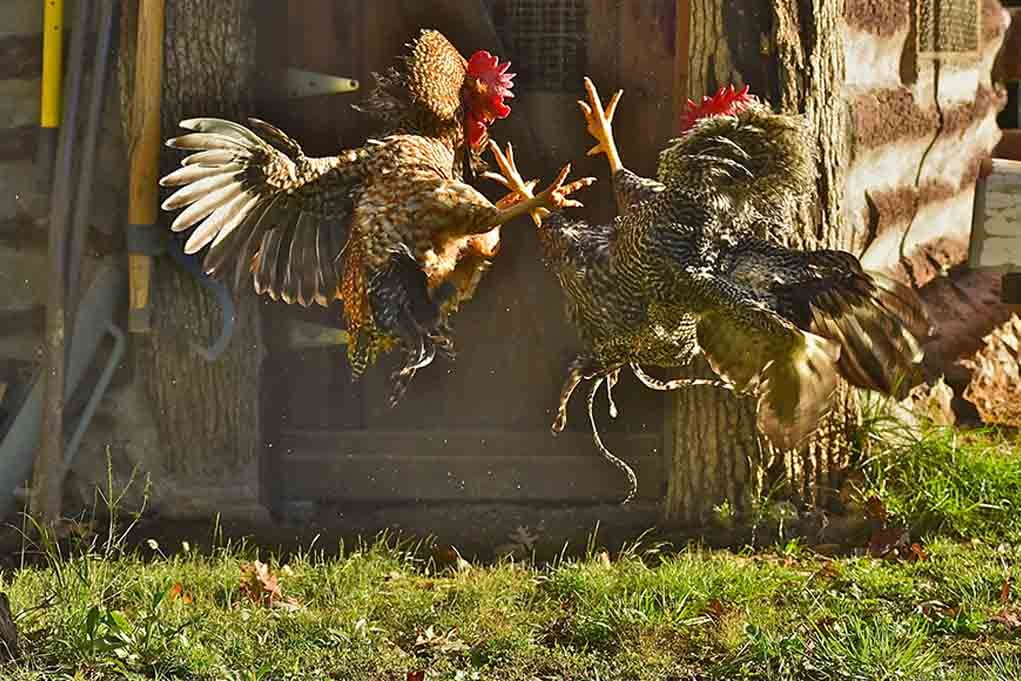 We’ve all heard the phrase ‘the pecking order. In our mind’s eye, we likely see colleagues and co-workers neatly arranged in order of ‘merit.’ From the CEO down to the janitor, everyone has a place in the ‘pecking order.

The term ‘pecking order’ was first coined in 1921 by Thorleif Schjelderup-Ebbe to describe the hierarchy of flock dynamics, and it came into popular usage in the 1930s.

What Is The Pecking Order?

So, exactly what is it, and how does it relate to you and your flock?

This method of organization places each member of the flock on a ‘heirachy ladder.’ At the top of the ladder will be the head rooster (or hen if no rooster is present). This complex social order is designed to ensure good cohesion between members and few if any, petty squabbles…

This sort of co-operation between members of the flock ensures the flock’s survival by giving the best chances to the fittest birds.

It is a flexible structure, and within the flock, there are usually three different types of social order going on:

A rooster may go up the ladder if he mounts a successful campaign against the leader. He becomes the new chicken-in-charge! And the defeated roosters go down the ladder, as do weak or sickly birds. 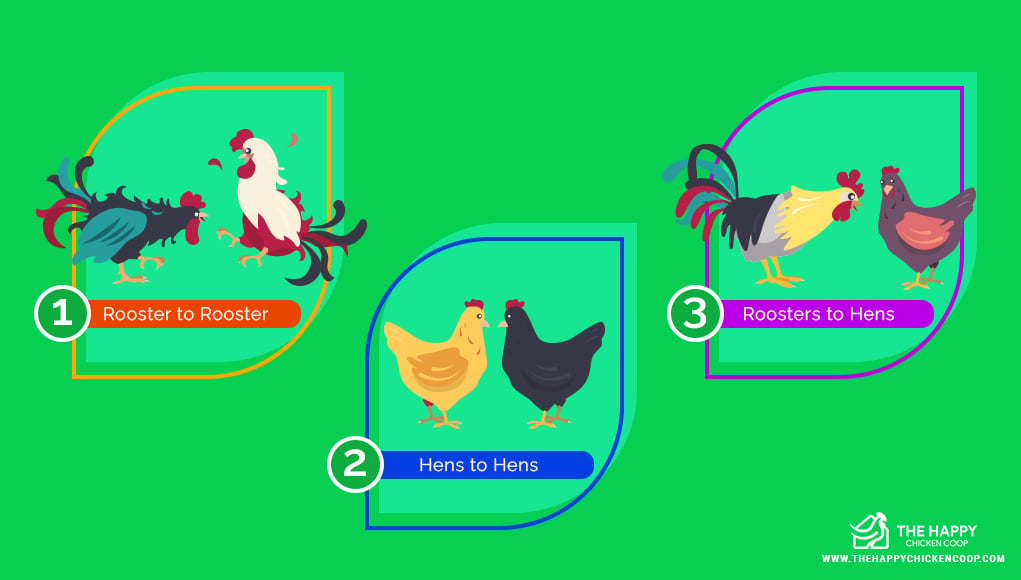 Roosters that are lower in order, crow less frequently, and rarely mate. Hens have their own ‘girls’ only ladder. The matriarchs of the flock will be up to the top of the ladder, with less dominant birds at the bottom. In this system, the older, stronger, and more savvy hens will be at the top.

Young pullets just coming to the point of lay will quickly move up the social ladder.

If a bird tries to go ‘out of turn,’ she will earn glares, pecks, and feather pulling from the higher ‘ranked’ hens. Usually, a ‘look’ or a quick peck is enough to remind the lower ranking hen she has overstepped the boundary.

The serious games of the pecking order start when chicks are around six weeks of age. Chicks will start rushing at each other, bumping chests and flaring feathers. These are all methods used to intimidate flock mates at any stage of life. By the time they leave the brooder, they will have their own pecking order sorted out.

Whilst the pecking order can create a sense of harmony within a flock, it can also create absolute havoc, with chickens fighting each other for their position within the order.

A full-on pecking order assault is a violent and terrible thing to see. Older birds can be relentless, drawing blood, causing serious injury even death. There is nothing gentle about the pecking order. 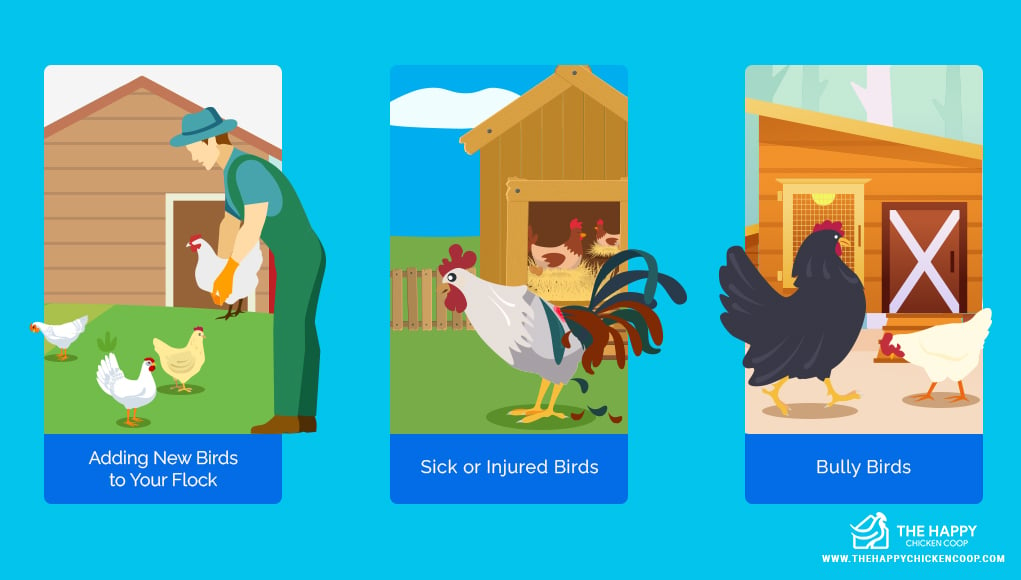 1. Adding New Birds to Your Flock

Adding birds to your existing flock will cause a shift in the pecking order. The older birds will be very suspicious of the new members and can be quite violent about it.

If you do add new birds to your flock, it needs to be done slowly and cautiously. You should never add less than two birds to an established flock. 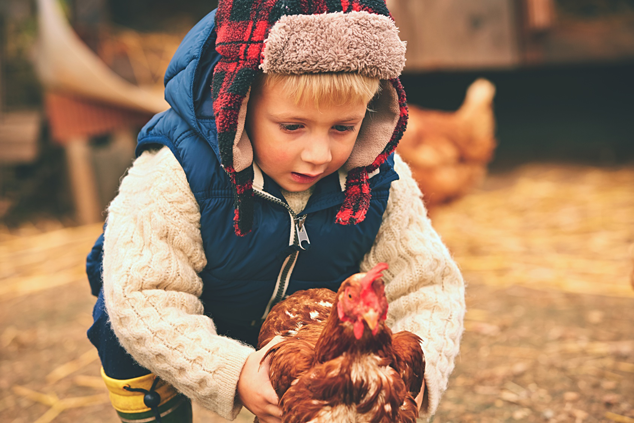 The method that has worked well for me in the past is the separation pen.

This is an area that tou can put the new hens safely without the older girls being able to peck them. They can look, pace around the enclosure but can’t get in. I do this for a couple of weeks, then open up the enclosure.

When you open up the temporary enclosure, you need to have places the new birds can hide or run to if flock members get really mean.

I have not had any integration problems using this method- a couple of pecks here and there, but nothing too vicious. As a keeper, you should not intervene unless blood has been drawn, then you need to remove the inured bird quickly and isolate them.

Remember to read Introducing New Chickens to Your Existing Flock for more help!

Chickens rarely show any signs of illness or weakness. If they do, other flock members will pick on them and either drives them from the flock or kill them.

This sounds awful, but remember, the flock in the wild is as strong as its’ weakest member. It’s simply a survival tactic. 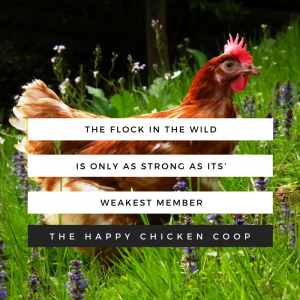 If you have a chicken that is constantly being pecked at, you will need to isolate her away from harm. A large crate or ‘chicken hospital’ area will do very well. Check her over carefully for peck damage and also try to find out what is wrong with the bird.

The victim will need to be isolated until wounds are healed- now comes the tough part, trying to re-integrate the affected bird. Use the segregation pen, which we mentioned earlier on for a few days, and then reintegrate her.

Sometimes you have a hen who is a bully to everyone. Often she will be in the middle of the pecking order, rarely at the top.

My bully bird is called Red Sonya, and she is mid-level pecking order-wise. When she sees a new girl anywhere near food, she makes it her business to let them know they are not entitled to one beakful of food- it’s hers! She dutifully ‘patrols’ the food stations for a day or so then loses interest. She has made her point, and the newbies avoid her!

If you have a hen like this, the best way to ‘straighten her out’ is the segregation pen for a few days. The pecking order will change while she is in isolation, so when she gets re-introduced, she will be a ‘newbie’ and treated accordingly.

Once in a while, you will get two or more hens that form a ‘bully club.’ Use the same treatment for them, except re-introduce them to the flock on separate days- this should break the pattern of bullying!

When it comes to roosters, however, it can be a losing battle. Adding an unfamiliar rooster to an existing flock with an established rooster is a recipe for disaster.

In other words, the newbie may welcome the challenge and engage with the established rooster. Many times, they will fight to the death.

On the other hand, if you raise roosters together from the chick onward, the pecking order will play out a bit friendlier, and in most cases, the rooster can coexist in the same flock.

With that being said, there need to be enough hens for each rooster. Otherwise, the two roos may become competitive over the handful of hens available to them. A good rule of thumb is to have 4 hens per rooster. This is good for the hens and the roosters. 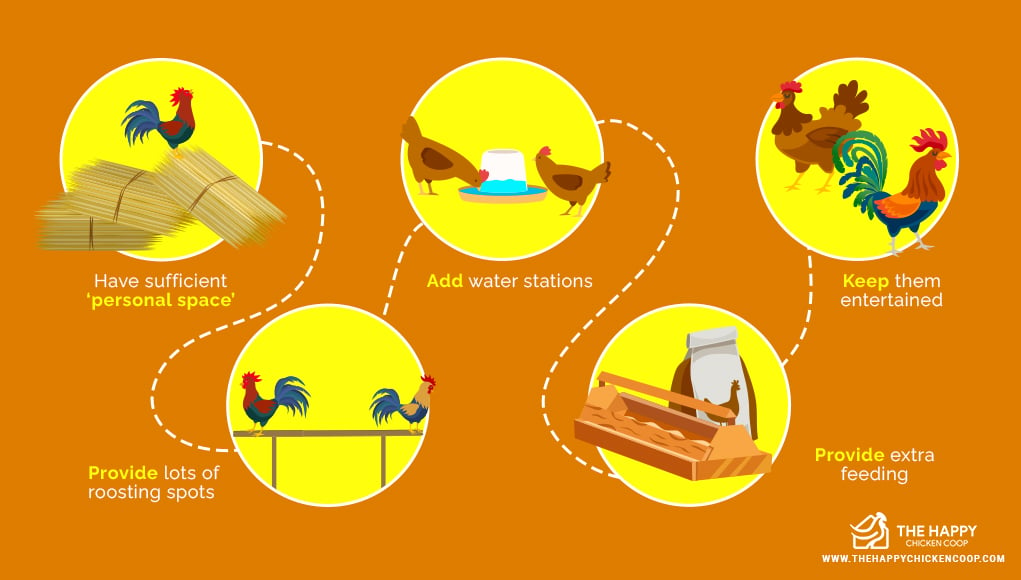 How to Avoid Pecking Order Problems

The good news is that the keeper can do much to ensure that old and new flock members integrate fairly peacefully.

First and most importantly, each bird needs to have sufficient ‘personal space.’

There really isn’t a ‘perfect formula’ for space requirements, often quoted is four square foot/bird for floor space. If they are confined within the coop twenty-four hours a day, I would certainly add as much room as possible since boredom leads to mischief!

If, however, your birds are allowed to free-range, coop space doesn’t really become an issue until winter. I provide my girls with one foot of roosting space per bird. Mine all cram together on the roosts at night, leaving lots of empty roosting space! As you can see, it’s very much an individual thing- some birds like space, others not so much.

Make sure you provide lots of roosting spots so that a hen can get away if she needs to. Providing places to ‘hide’ is important- old boxes, straw bales (outside the coop), dark, quiet areas in the barn/shed. If you can think along the lines of a two-year-old playing hide and seek, you will have great success!

Don’t forget to provide extra feeding and watering stations. I usually provide four for a flock of thirty hens; this gives everyone a chance to eat and drink in peace.

Congratulations! You have survived the ‘pecking order’ social upheaval! It gets easier every year, believe me!

The pecking order is a necessary evil for flocks to understand exactly where each hen fits within their own hierarchy.

Those birds towards the top of the hierarchy get first access to the feed, water, and roosting spots, whilst lower members of the pecking order are left with the scraps.

Sometimes the pecking order can become a real problem, but if you follow the steps outlined above, you will be fine!

Question: What do you think the best way to manage the pecking order is? 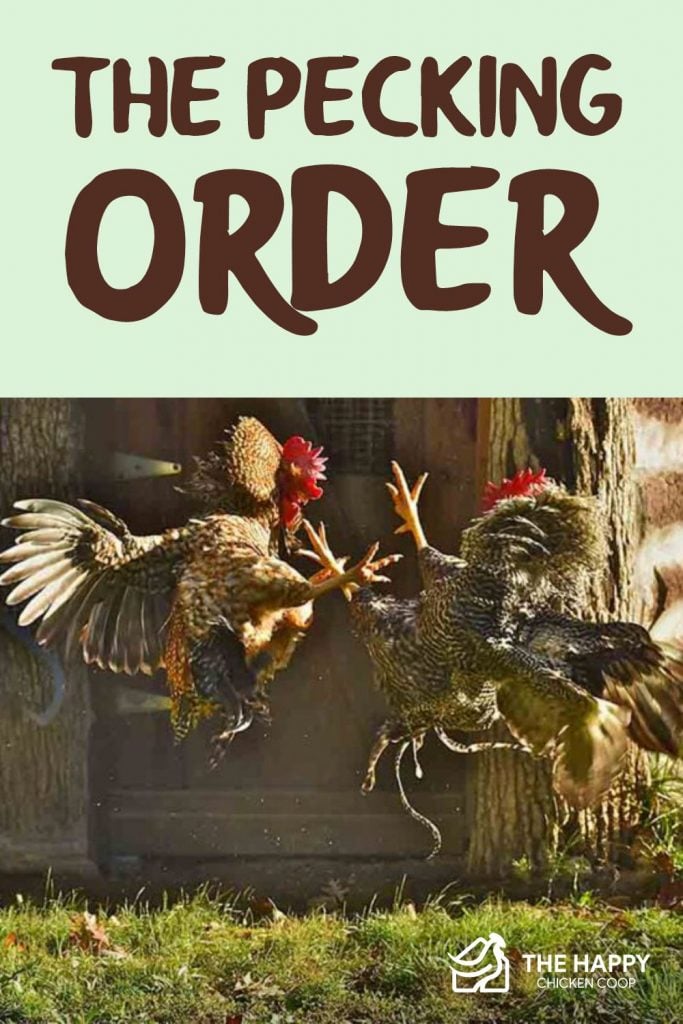 121 thoughts on “The Pecking Order: What Is It and How to Avoid Problems in Your Flock”