The Ultimate Guide on the Silkie Chicken 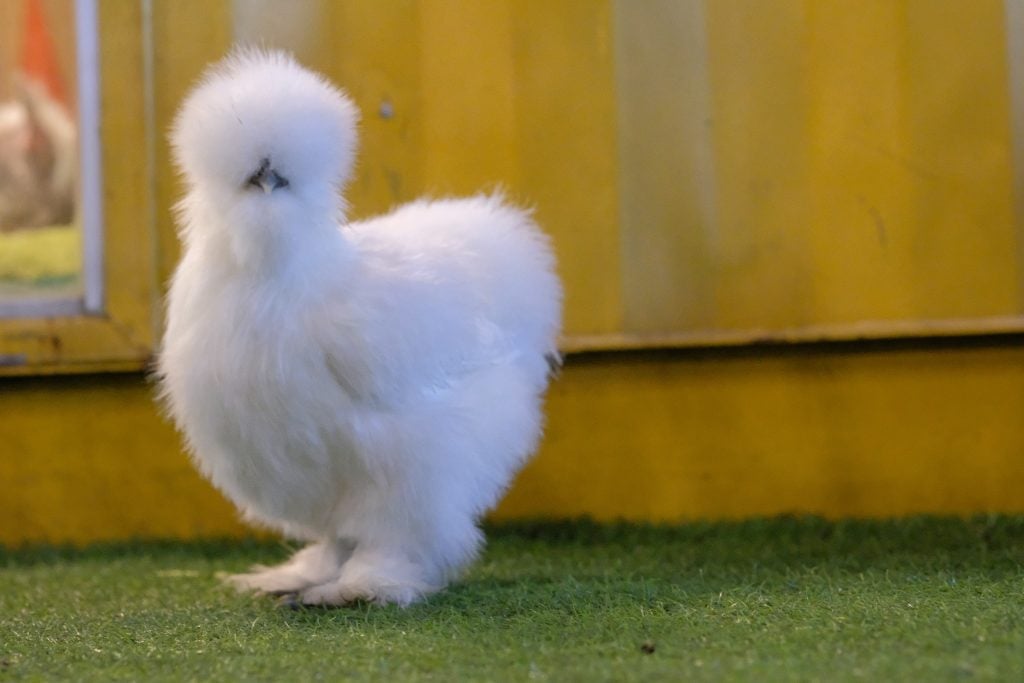 The Silkie chicken has been called fluff-balls, aliens from another world, teddy bears, and many other things in between.

Without a doubt, they certainly are unusual-looking chickens!

Their strange appearance, friendliness, and mothering skills are surely what endears them to many folks.

We will discuss its egg-laying capabilities and temperament before identifying a true Silkie chicken and checking if it is a good fit for your flock. 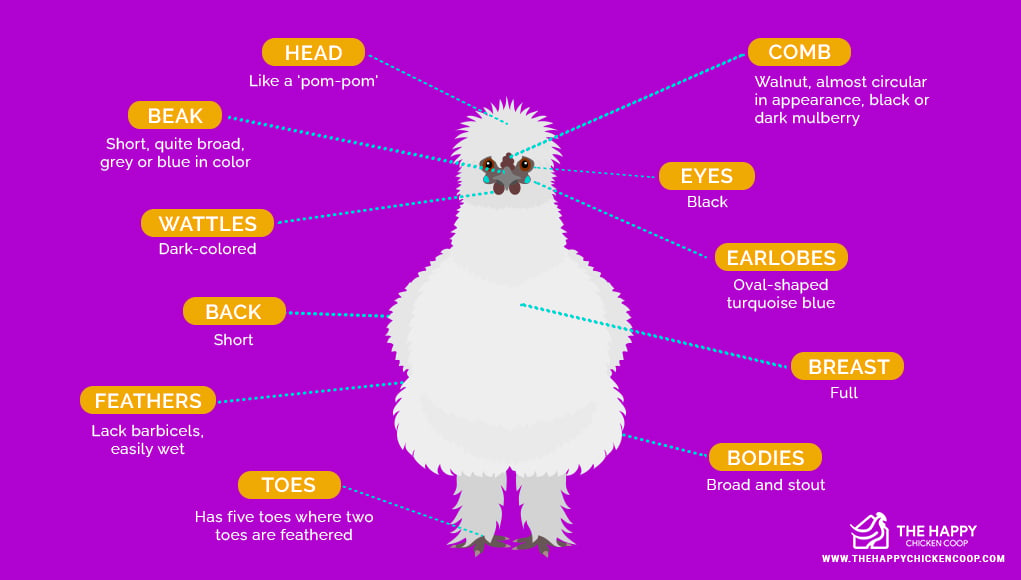 Silkies are most certainly different in many ways from a ‘regular’ chicken appearance!

The head should be crested, looking somewhat like a ‘pom-pom’ (similar to a polish chicken). If a comb is present, it should look like a ‘walnut,’ being almost circular in appearance.

The comb coloring should be black or dark mulberry – any other color, and it is not a pure Silkie chicken.

They have oval-shaped turquoise blue earlobes and dark-colored wattles.

Their beak is short, quite broad at the base, and it should be grey/blue in color. Eyes are black.

Their bodies should be broad and stout, the back is short, and the breast is full.

They have five toes instead of the usual four found in chickens. The outer two toes should be feathered.

The legs are short and wide-set, grey in color.

Their feathers lack barbicels (those are the hooks that hold the feathers together), hence the fluffy appearance.

The main feathering looks just like the under-down of regular chickens.

The fact that the feathers do not hold together means a Silkie chicken cannot fly.

It also means that the feathering is not waterproofed, and so a wet Silkie chicken is a pathetic sight to see.

If they do get significantly wet, they need to be towel-dried or even blow-dried – which they enjoy if it is done regularly.

The meat is also used in Chinese medicine since it contains twice as much carnitine as other chicken meat – carnitine has anti-aging properties (so it is said).

Silkie Chickens: What You Want to Know

Silkie chickens, fortunately, do not need a lot of hands-on attention and care.

These birds just like most adult chickens do just fine in winter climates and do not demand a lot if you are looking for less work on your end. 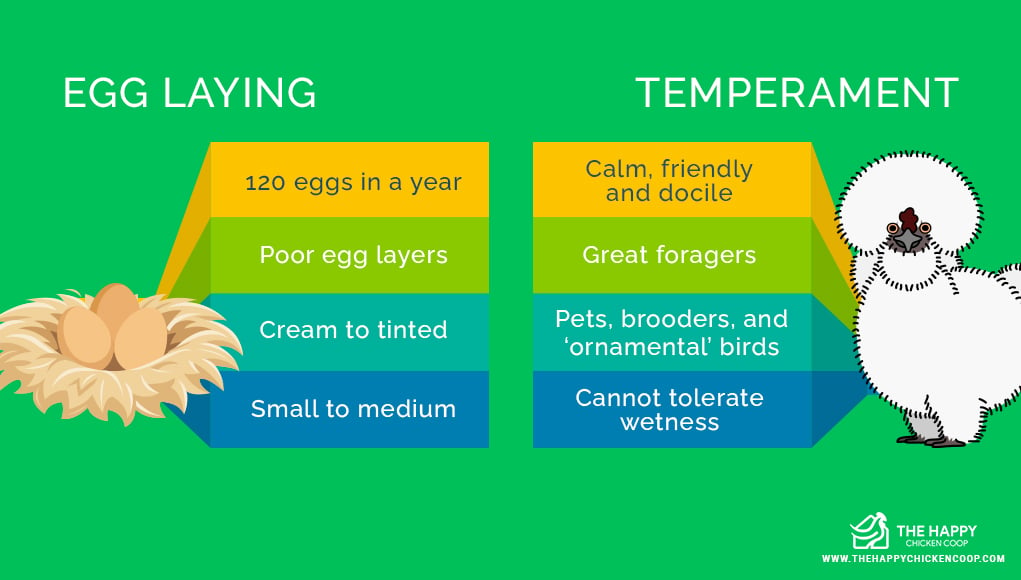 Silkies are poor performers in the egg-laying department.

If you get 120 eggs in a year, you are doing well. This equates to about 3 eggs each week.

The eggs are cream to tinted in color and are small to medium in size.

They start laying earlier in the year than most hens, starting up once the days begin to get longer – occasionally late December but more often early January.

Their temperament and silkies are known to be calm, friendly, and docile – even the boys.

It has been recorded by several people that the roosters will ‘tidbit for the chicks!

This docility can lead to them being picked on by other more ‘pushy’ flock members.

They do best when put with others of a similar nature, such as the Polish hen.

Despite their fluffy feathering, they tolerate the cold fairly well – wetness is something they cannot tolerate.

If your climate is freezing in the winter, they will benefit from a little supplemental heat.

They are content to be confined, but if allowed to, free-range are great little foragers.

The area they forage should be a ‘safe zone’ since they cannot fly to escape predators.

Silkies are more renowned as being pets, brooders, and ‘ornamental’ birds.

The Silkie chicken is notoriously difficult to sex until around six months old. A breeder can certainly give you their best guess in sex, but it’s not certain until the bird crows (or not)!

Silkies are actually not noisy chickens at all. This makes sense considering their calm disposition.

This makes this breed great if you live in an apartment and are allowed to have chickens.

As long they have some space they can be a great addition to your lifestyle. You won’t have to worry about your neighbor complaining about chicken squawking.

Silkie Chicken Care (And What to Watch Out For)

Unfortunately, silkies can be quite susceptible to Marek’s disease.

Many silkie chicken breeders have bred their stock for natural immunity, but of course, you can get your birds vaccinated.

With Silkies being very fluffy, they can be a target for mites and lice, so you should pay due diligence to these little fluffballs. You may also need to trim the feathers around the eyes to help them see a little better.

Other than this, the Silkie chicken is quite robust and will usually live for 7-9 years, longer with lots of TLC!

If A Silkie Gets Wet

Since the feathers do not stick together on this “furry” breed, they aren’t insulated, and other breeds of chickens. This means they can catch a chill easily and die of hypothermia, especially if they live in cold climates.

Tid-bitting is when a rooster finds a tasty treat and calls his hens over to allow them too much on it first. He usually clucks to them, picks up the morsel, and drops it so the girls can see it.

Silkies have been known to do this for chicks as well.

While most roosters in this breed are friendly, there are also territorial and aggressive territories to strangers. But as with all breeds, temperament can vary from chicken to chicken.

Pros and Cons of Owning a Silkie

There is no doubt that the Silkie chicken is an ancient breed, probably of Chinese origin.

Some believe that the Silkie chicken dates back as far as the Chinese Han Dynasty, in 206BC.

The Chinese name for the Silkie chicken is wu-gu-Ji – meaning black-boned.

An alternative name for this bird is the Chinese Silk Chicken. The evidence points to a Chinese origin quite strongly, but it cannot be stated completely.

It was first mentioned by Marco Polo (around 1290-1300) on his remarkable journey across Europe and the Far East. Although he did not see the bird, it was reported to him by a fellow traveler, and he reported it in his journal as “a furry chicken.”

The Silkie chicken made its way westward either by the Silk Road or by the maritime routes, likely both.

The ancient Silk Road stretched from China to modern-day Iraq. Numerous secondary routes crossed over into Europe and the Balkan states.

The next mention we have is from Italy, where Aldrovandi, in 1598, speaks of a chicken with “fur like a black cat.”

When people first introduced the Silkie chicken to the European public, it was said to be the offspring of a chicken and a rabbit – a not so unbelievable thing back in the 1800s!

Many unscrupulous sellers sold Silkies to gullible folks for curiosity, and it was used as a ‘freak show’ item in traveling sideshows and exhibited as a ‘bird mammal. 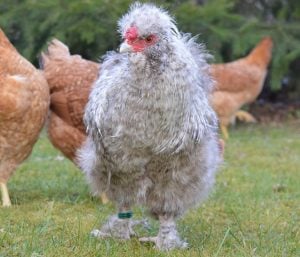 Experts accepted the Silkie chicken into the British Poultry Standard of Perfection in 1865 and the American Poultry Association standard in 1874.

Accepted colors are blue, black, white, grey, buff, splash, and partridge. Several other colors are available, such as lavender, cuckoo, and red, but they are not yet accepted in the APA.

A Silkie chicken is the ultimate in kids’ chickens. They are cuddly, fluffy, and tolerant, love sitting in your lap, and even enjoy cuddles.

They are very friendly, calm, and docile birds and interact very well with people – they will follow you around and ‘talk’ to you.

This docility can lead to them being picked on by more aggressive flock members, so try to keep an eye open for bullying.

Many folks keep Silkies to hatch out other eggs. A Silkie chicken in ‘broody mode’ will usually accept any eggs (including duck) placed under her.

If you live in an apartment and want to have chickens as pets, the Silkies are a perfect fit since they are pretty quiet too.

However, if you live in an area that is inclined to be wet and muddy, be aware that those conditions do not really agree with Silkies because of their feathering, but if you absolutely must have them, you will need to keep them clean and dry.

How Cold Can Silkies Handle?

Silkies are relatively cold hardy birds and tolerate low temperatures well. As long as you give these chickens a roof over their head, they will survive in temperatures close to zero degrees Fahrenheit.

Yes, a silkie chicken is considered a backyard chicken, and they lay white/cream-colored eggs that are safe to eat.

Are All Silkies Bantams?

In some countries, like the United States, Silkies are recognized only as bantams. However, in certain regions, breeders bred them up to large fowl.

How Often Do Silkies Lay Eggs?

A silkie chicken can lay about 120 eggs per year, about 2-4 eggs per week.

Like all pets, chickens have a distinct smell. When you don’t bathe your animal or pets, they start to smell bad.

As long as you keep them and their quarters clean these chickens should not smell different than they normally smell.

The Silkie chicken always brings a smile to peoples’ faces. This ‘odd-ball and the slightly unusual bird is certainly a crowd pleaser!

Although they won’t keep you in eggs, they will supply you will a lot of love, smiles, and cuddles. When they become bonded to their owners, they can be described as ‘dog-like in their devotion.

They will follow you, talk to you, check out what you are doing, and ‘help’ too!

They are certainly a great bird to have around if you have eggs you want to hatch but don’t want to fiddle around with an incubator.

Read how to hatch eggs with a broody hen for more on that.

If you have Silkies, we would love to hear from you. Leave your comments in the section below…

Read Next: Bringing Chickens Home For The First Time 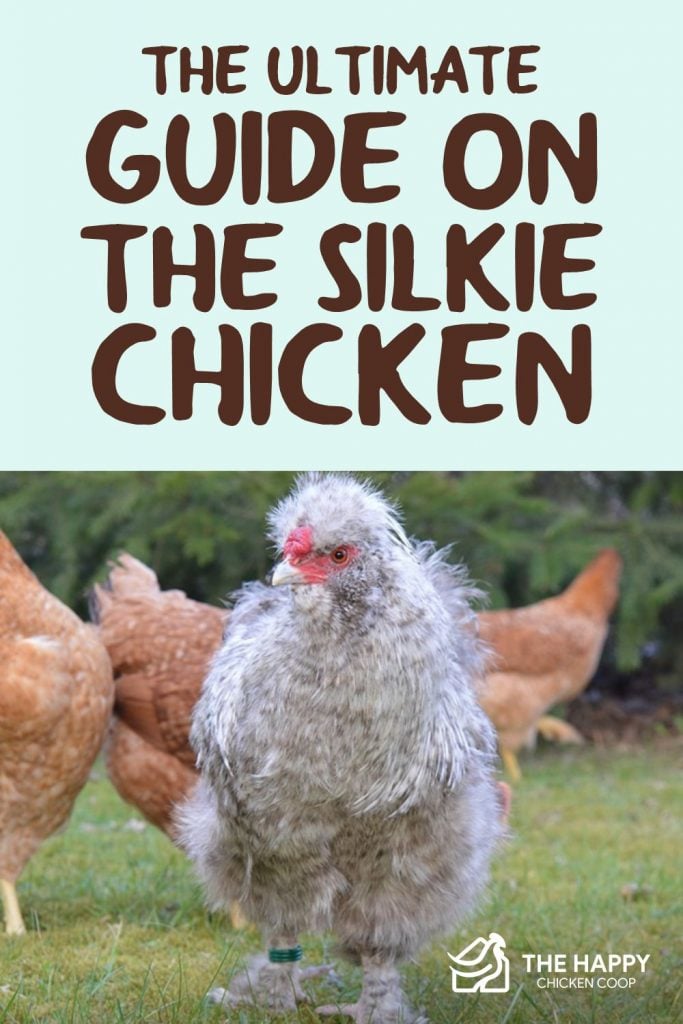 116 thoughts on “The Ultimate Guide on the Silkie Chicken”