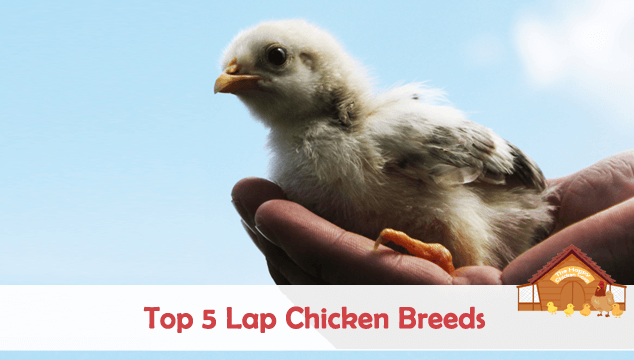 We stretched the ‘lap’ chicken to house chicken, but it boils down to the same thing: a chicken that is comfortable to be in a house with people, and can be considered a companion bird. A bird that will thrive in a secure confined space with its favorite owner.
We considered ‘good’ egg laying as a bonus, but really most of these birds do a fairly respectable job on that score.
All of the birds featured here are generally pretty low on the ‘pecking order’ because they are mellow and non-aggressive breeds – an absolute necessity for house chickens, especially if there are kids around.
As with Top 8 Chicken Breeds for Small Backyards, it’s always hard to trim down the list to just five!
So in no particular order, here are our best 5 lap chicken breeds.

This list would be incomplete without the fun and friendly Silkie!  This quirky bird has a few unusual attributes.
Firstly, their feathers. The feathers lack barbicels which hold the feather together, hence the fluffy look. The plumage is fine and silky – hence the name! The legs too are feathered. In fact, the Silkie looks more like a plush play toy than a chicken.
Silkies can be bearded or non-bearded and they come in a wide variety of plumage too.
As for egg laying, 2-3 eggs per week from this adorable little bird will give you a modest supply for the pantry.
Have you ever seen blue earlobes on a chicken? Well, the Silkie has them – a pretty blue that is very noticeable up close and personal.
The Silkie also has black skin and bones – it is a melanistic bird. The walnut comb should also be black. Another interesting little quirk is the 5 toes on each foot – a trait very few chickens have.
The origins of the Silkie go way back into ancient history, but it is thought to have originated in China or the Far East. When the breed was first brought to the western world, sailors would tell gullible folks that it was the result of a chicken and rabbit union! In the Victorian world, this tale was often believed and repeated numerous times.
The Silkie’s personality is friendly, sweet and probably one of the calmest and most docile hens you will ever meet. A very quiet hen usually – with the exception of the egg song!
The fluffiness of the feathers means that the Silkie does not fly well at all. Perches need to be quite low to the ground, although they would be happy to pile together on the floor to sleep – or in a cat bed (without the cat!).
They also need to be kept out of the bitter cold and inclement weather due to their feathers.
They are extremely popular as pets, especially children’s pets. They love to be held and cuddled and enjoy being a lap chicken often hopping up for a snooze!
They will live for around 7-9 years although with TLC they have been known to live much longer. This little bird is sure to make a great companion for you and your family. 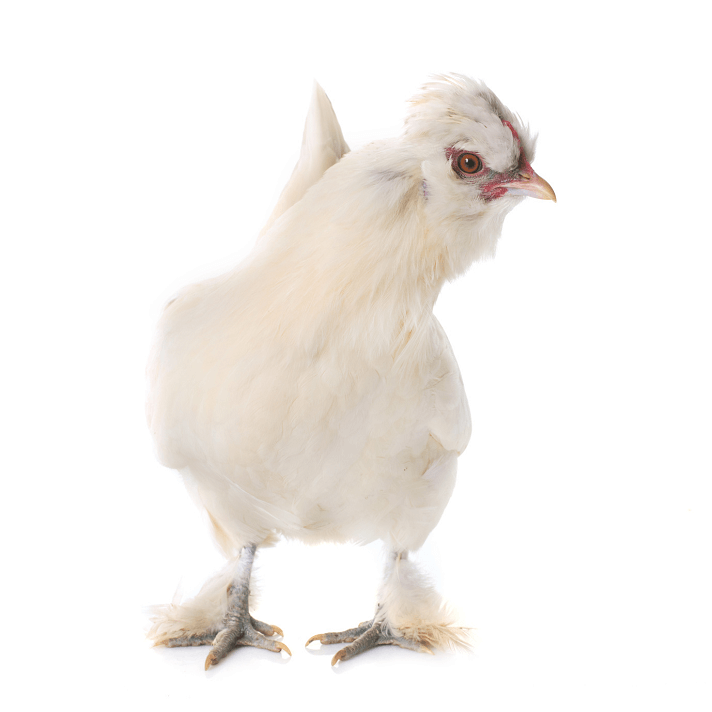 Now for a touch of the unusual, chic and exotic for the Fab 5 ‘lap’ chickens: The Sultan, known as the Serai Tavuk or Serai Taook in its native land of Turkey.
The name means Fowl of the Sultan as they were decorative court birds to the Sultans of the Ottoman Empire. Apparently the Sultans really loved this bird since it rarely scratched or pecked at the Imperial lawns and gardens.
They are considered mainly an ornamental breed since they are terrible egg layers! 1-2 eggs per week is about all you will get from them, but what they lack in laying prowess they make up for in the style department.
Generally seen in the color white although other colors do exist, they have a large puffy crest which almost hides the V-shaped comb.
Sultans have ‘vulture’ hocks and lots of leg feathering.  The wings are carried low. To complete this notable ensemble they have a long tail and 5 toes! These birds are the elegant fowl of the poultry world!
They are said to be very calm and docile birds, being friendly to humans and bearing confinement very well. They are also noted to be easy to handle.
Indoor life would suit them well as they do not tolerate cold climates well at all. They also are known to fly, so perhaps higher perches indoors would keep them happier. In standard size the boys weigh around 6lb and the girls around 4lb. 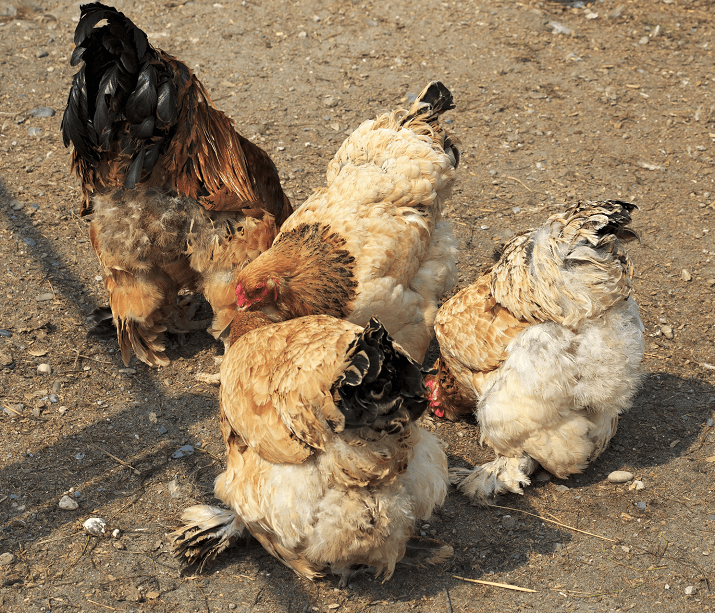 Fluffy, mellow and cuddly – what more could you want? The Cochin chicken has it all.
This delightful ball of fluff originally came from China back in the mid-1800s. A few were given to Queen Victoria who adored them. They became so popular that they are credited with starting the ‘hen fever’ of Victorian times.
The plumage comes in a variety of colors. The Cochin has profuse feathering even the legs and feet are feathered which makes them quite cold hardy. On the other hand, all that fluff makes it tough for them in the heat of summer.
Their personality is friendly, calm and docile. They enjoy human company and love to be handled, so that makes them a great pet. They are generally quiet, very tame and enjoy lap time.
Cochin tolerate confinement very well preferring to be fed rather than forage for food. The hens will weigh around 7lb with the boys being a pound or so heavier.
They are not prolific layers, 2-3 eggs per week, but they do make great moms and many people keep them as broodies.

At last I get to talk about one of my most favorite breeds!
D’Uccles are from Belgium, specifically the area around Uccle.  They were created in the early part of the 1900s’ by a Mr. Van Gelder of Belgium. They are bantam birds, so small and sweet is the name of the game here!
They come in several colors: mille fleur is the most popular, mottled black, porcelain and a few others.
With beards and muffs, not to mention vulture hocks, feathered legs and feet, they are quite eye-catching. All that foot feathering gives them a quite distinctive way of walking.
D’Uccles are a happy and talkative bird, they can trill away quietly during the day and enjoy human interaction. They enjoy perching on your shoulders or head and they also like to be gently held and will have a conversation with you if the mood takes them.
They are calm and curious, can fly on occasion but they tolerate confinement well.
Some can be broody and will make great mothers; others are not broody at all. They don’t lay too many eggs, but some of mine will put out 3 per week.
The boys weigh in around 26oz and the girls 22oz. They don’t tolerate the cold very well although mine are sturdy enough to withstand the New York winters. 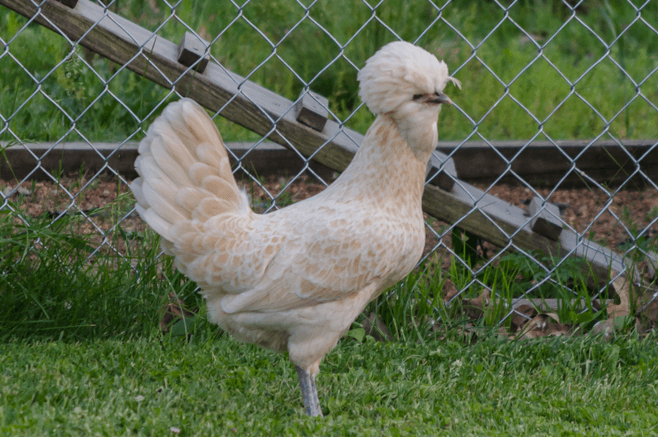 The girls with the crazy hair-dos! It’s hard to miss a Polish hen with the pop-pom; back to the 70s hair-do.
These birds are great contenders for being a lap or house chicken.
The feathers from their crests often occlude their vision, which can make them nervous and skittish. Trimming away the excess feathers will help their vision tremendously and they will be less likely to be nervous. If you intend to show your birds, trimming is not acceptable before a show.
Polish chickens tolerate confinement really well and since they are always curious they can find themselves stuck in places they shouldn’t be in – so inside quarters will be much safer for these gorgeous little birds.
They are friendly, tame and docile, and enjoy cuddles and handling. They are pretty quiet unless they find themselves in trouble.
The average polish chicken will lay 200 small white eggs per year which equates to 3-4 eggs per week. Finally, they don’t have a tendency to broodiness although this can vary from line to line.
If you want more in depth information about the Polish breed please see our article here.

As always it was hard to find the top contenders – our list could go on for a few pages yet!
We hope you like our selection and that it helps you decide which bird(s) would be most suitable for you.
As with all chickens, your indoor birds will benefit from having a set routine and a space of their own that they can return to if they want some time alone or a quick nap.
There is a tendency for some folks to actually have their birds sleep on the bed with them – a practice that should be discouraged. In the same room is fine, but on the bed could be detrimental for the bird and you.
If you have other house pets such as dogs or cats, they can be good friends but it will require some time, lots of patience and input from you to ensure all goes well.
Having house chickens is very therapeutic for many people. In times before we all got paranoid about germs and diseases, livestock used to share the house with people in the worst weather months. It would have been quite common to see chickens wandering around.
I’m not advocating returning to that scenario, but trying to give some perspective to the folks who say “chickens in the house? You’re crazy!”
Enjoy your house guests; they will give you many hours of pleasure and contentment.
Let us know your thoughts in the comments section below…