How Long Will My Hens Live For? 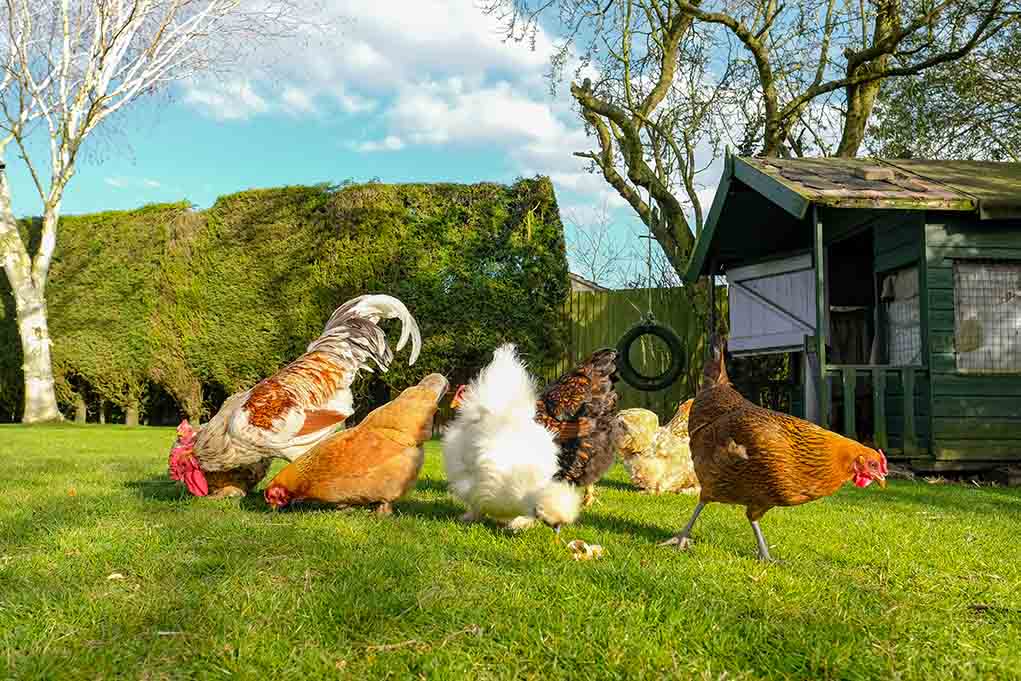 The oldest chicken ever to have lived was called Matilda, and she was sixteen years old when she finally died. Her life circumstances were not ‘average chicken’. She belonged to a pair of stage magicians who took great care of her. Also, she never laid any eggs! She had quite a luxurious life with minimal stress- she apparently enjoyed being a ‘stage chicken’, even appearing on the Jay Leno show! You may ask, how long will my backyard hen live?

Aside from exceptional birds like Matilda, how long can we expect our hens to live?
The lifespan of a chicken depends on many things: breed, environment, genetics and keeper are just a few things to consider.

In commercial settings, hens are usually kept a couple of years before slaughter. The aim of commercial businesses is to have a ‘high egg to low feed ratio’. Once the hen goes past her prime of laying, she will be sent to the slaughterhouse.

Grandmas’ hens would have had a relatively short lifespan. The birds of the ‘good old days’ were expected to forage for themselves and their chicks.

They would be given the table scraps, but other than that, their diet was what they could find for themselves.

Two to four years would likely have been their average lifespan.

However over the last few decades our hens have started living longer (up to 8 years) and this is in no small part due to:

These improvements will give the average backyard chicken at least a 5 year lifespan and with some protection from predators and care you should expect 7-8 years.

Let’s now take an in-depth look at some of the factors which affects your hen’s lifespan.

Enhanced Chicken Genetics Can Determine How Long My Hens Will Live

Many of these changes came about after World War 2. Rationing of eggs was in full force until after the war years in England. During the rationing years an adults’ allowance was one egg per week!

The government and industry were determined that the country would be more self-sufficient with regard to eggs and poultry.

Until after the war, chickens were not considered to be ‘proper’ farm stock.

That all changed with the introduction of broilers from the US. Breeders in the US took to the task of creating a prolific egg laying breed and succeeded magnificently!

Birds started to be cross bred to produce prolific laying hens or utility breeds (good for eggs and the table).

This busy period in search of the ultimate hen brought forth fine specimens such as the Rhode Island Red and Delawares.

Today we have egg laying ‘superstars’ such as the Golden Comets. As may be expected, breeding a hen to lay 300+ eggs per year, takes a toll on their body.

Our hybrid hens tend to be shorter lived than the old fashioned ‘heritage’ breeds, typically around 2-3 years, depending on whether the keeper wants to cull or keep.

There are still many good utility (dual purpose) hens out there on the market for those of us who wish to have the older, more long lived varieties.

These older varieties were overlooked in favor of raising birds that could grow quickly with minimum input, but breeds such as La Bresse and Sussex are starting to make a comeback in backyard flocks.

Unfortunately, the genetic pool of many of these traditional old breeds is critically endangered these days. If you are interested in finding endangered breeds- head over to the American Livestock Breeds Conservancy.

The main differences between the two types of chicken seen today are: 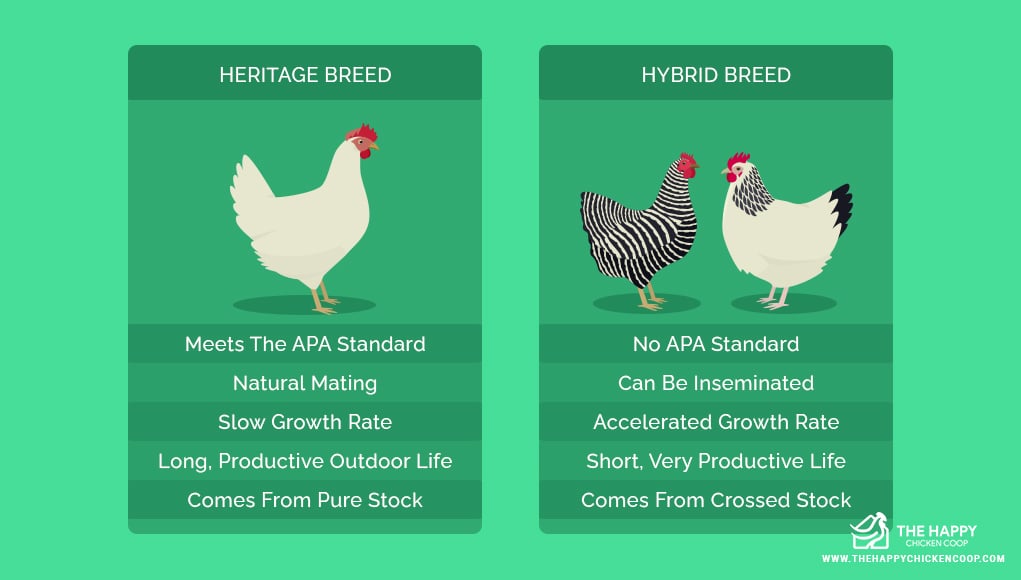 Heritage breeds tend to grow and fill out a bit slower than their counterparts. This is a blessing really, since generally speaking what grows fast will ‘wear out’ sooner.

The hybrid chickens will start laying sooner, but in general will slow down quickly- around 2-3 years of age.

Heritage layers will continue past that number, although production will be slower and more sporadic.

Overall though you can expect a hybrid hens’ lifespan is around 6 years, whereas sturdier Heritage breeds should live closer to 8 years old.

Disease and Parasites Affecting How Long My Hens Live

Diseases and parasites of poultry have been studied extensively.

Many advances in caring and treating several diseases, understanding the methods of infection, and the introduction of good bio-security have improved the overall health of poultry in recent years.

However even with these advances it still remains true that hens living in less cramped quarters with good nutrition, fresh air and plenty of space, will live longer than chickens crammed into large production houses.

The current outbreak of Avian Influenza has the production houses in a quandary. Despite all of the rigorous biosecurity practiced at the commercial operations, all but 10% of bird flu outbreaks have been commercial.

However, this does not mean that the backyard chicken keeper can let their guard down, although you may be starting from a better place as far as space and more individual care goes.

Generally speaking, most diseases can be kept at bay by practicing some sensible and easy steps.

In previous articles we have talked about biosecurity of your flock. Good handwashing, maintaining a closed flock, tending to older flock members before tending to the quarantine pens and wearing appropriate clothing if visiting or being visited.

All sorts of germs and nastiness can travel on the sole of a boot.

Many of the ‘old time’ diseases of chickens have been studied and can be better treated now. For example a vaccination against Mareks’ disease was invented in the 1970s’- the disease was discovered and named in 1907.

As more and more harsh diseases and parasites are discovered and cured we can expect the average lifespan of our backyard chickens to move closer towards 8 years or more! 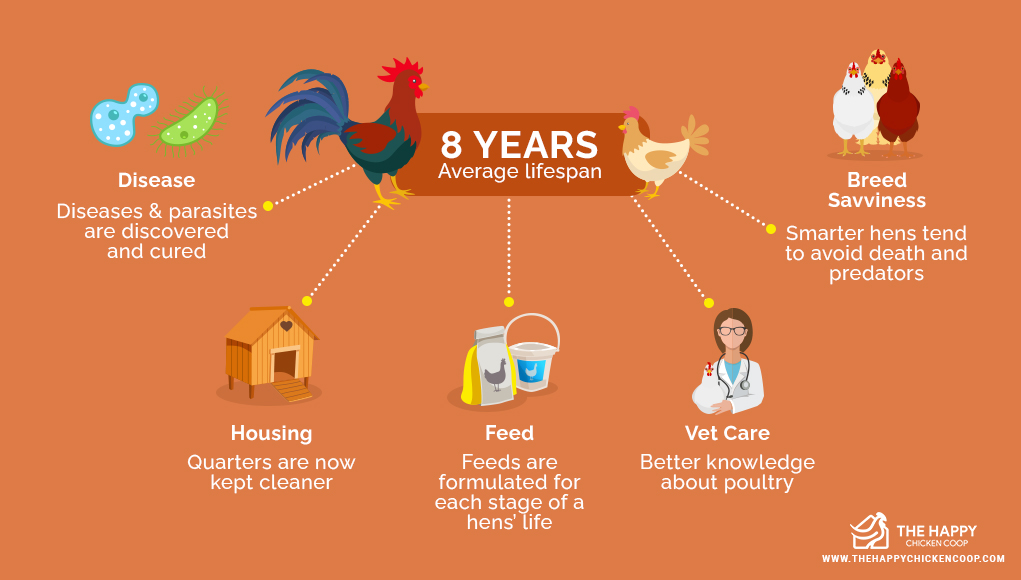 Improved Housing and Sanitation Helps How Long My Hens Live

In all of history, not just poultry history, there have been tremendous strides made with the application of cleanliness and sanitation.

Epidemics of cholera and plague were rife in the Middle Ages and up until the 1800s’ in England because of filth.

The US also suffered badly from typhoid and influenza type diseases which were spread by lack of hygiene and cramped living quarters until the early 1900s’.

Eventually, these higher standards translated into better care, housing and feeding of most livestock.

Unfortunately, the chicken was always seen as the ‘poor relative’ of the barnyard, so change came slowly and as we have already mentioned, many of these improvements didn’t happen until after World War 2.

Chickens finally got their own coops, feed rations and bedding! Their living quarters were kept cleaner, nutrition improved and the general wellbeing of the hen improved dramatically.

And with this their lifespan in recent years has dramatically increased from less than 4 years to anywhere from 6-8 on average.

Chicken rations of today are far superior to many of their predecessors.

Whilst we may disagree with the use of GMOs’ in animal feeds as ‘unnatural’, when comparing to the ration of yesteryear it is a truly wholesome thing.

The guesswork has been taken out of the process and we can be sure our birds are receiving all the nutrients they need to produce eggs, chicks and maintain their health.

This feed ensures that our chicks grow up to be strong healthy hens who not only lay well, but who also have a strong core which enables them to live longer.

All that remains for us to do is keep the coop fresh and clean for the birds!

Although it’s still comparatively rare to find a vet who has a great knowledge of all things poultry, the recent progress made in animal medicine has been spectacular!

Flock keepers too, are more diligent with their birds.

Taking notes of what seems to be wrong, isolating a hen before things get out of control and trying to tend for their birds in a more holistic way are all part of the overall improvement of the birds’ chances of correct treatment in times of need.

Of course, taking an animal to a veterinarian is an expensive proposition and many people simply cannot afford that option.
It’s perfectly alright to treat minor conditions yourself as long as the bird is not suffering any undue distress. The wellbeing of the bird is of paramount importance, so you must always remain attuned to the possibility of distress and pain in the bird.

With this care, diseases and illnesses (such as Mareks’ disease) which would have killed birds previously are now not an issue!

Some breeds are savvier than others, and then there are some birds who are just plain smarter than the rest of the flock.

For example, some chickens are a bit more conscious of their surroundings, especially in the free-range environment. These birds keep a watchful eye out for predators, stay close to the safety of dense brush, and never stray far from the flock.

On the other end of the spectrum, you may have a hen that is completely aloof and will wander into the open with a hawk flying overhead.

When it comes to the intelligence and savviness of a chicken, whether you have smarty or not is partly within the breeding and partly the luck of the draw.

But there is something to be said for the intelligence of certain chickens. Smarter birds tend to avoid death-by-predator for much longer than a hen laser-focused on grubs.

How Long Will My Hens Live: Conclusion

So, as you’ve probably realizes now, there is no definitive answer to: “how long will my chicken live?”

Variables such as: the breed, living conditions and cleanliness will all affect the life expectancy of your hen.

Also, other factors that will come into play will be predators, accidents and unforeseen circumstances. None of these can be predicted of course, but certainly extra care needs to be taken to protect your birds if they free range.

With this said, if you take good care of your girls and keep predators away you can even expect your girls to live at least 6-8 years old and, if you’re lucky, this figure can creep into the double digits!

Let us know in the comments below the age of your oldest hens and is she still laying?

READ NEXT: How Long Do Chickens Live: 6 Factors That Impact Life Expectancy 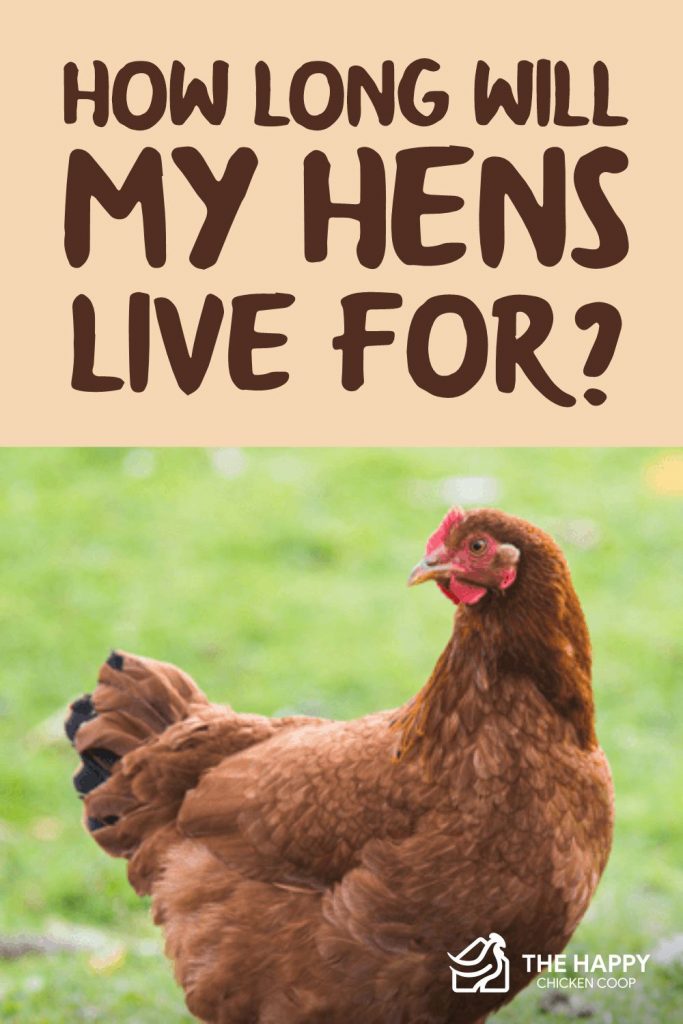 37 thoughts on “How Long Will My Hens Live For?”