The Miracle of Chickens’ Feathers 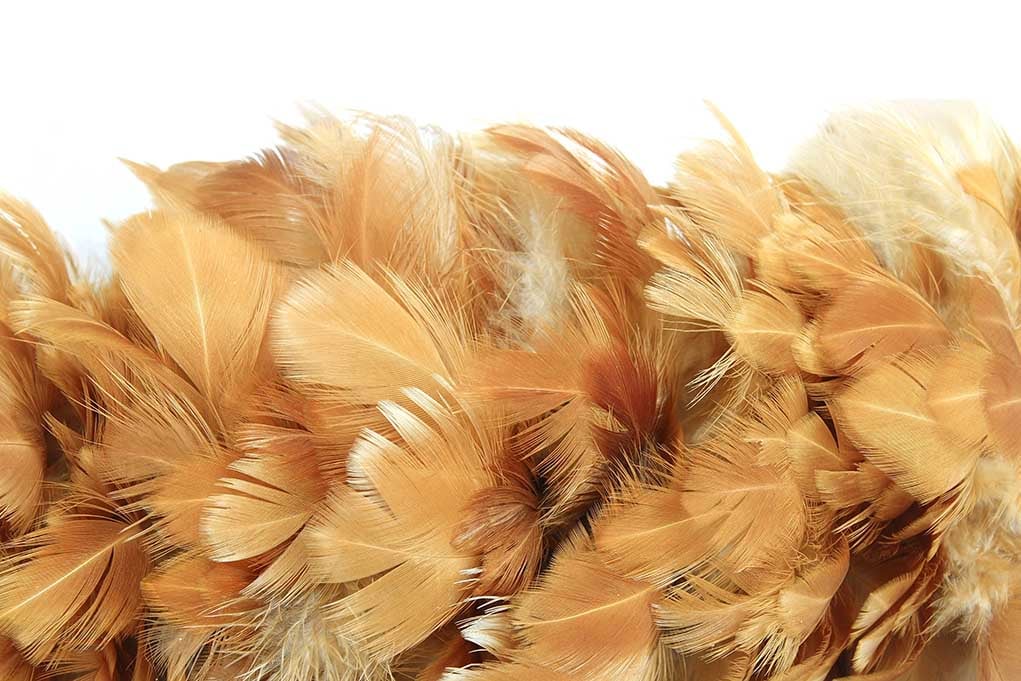 All birds are covered to a greater or lesser extent with feathers. We really don’t think about the amazing ability of chicken feathers and their use.

The very first birds, Archaeopteryx, were huge, terrifying beasts. They are one of the first known appearances of the feather, enabling this dinosaur to fly!

We will take a closer look at this marvel of engineering and see just how amazing it truly is! The next time you find a loose feather, spend some time looking at it closely. It really is a thing of practical beauty.

Despite having feathers, not all birds can fly. Birds can be divided roughly into flightless (emu, kiwi), limited flight (chickens), and full flight (songbirds, hawks). 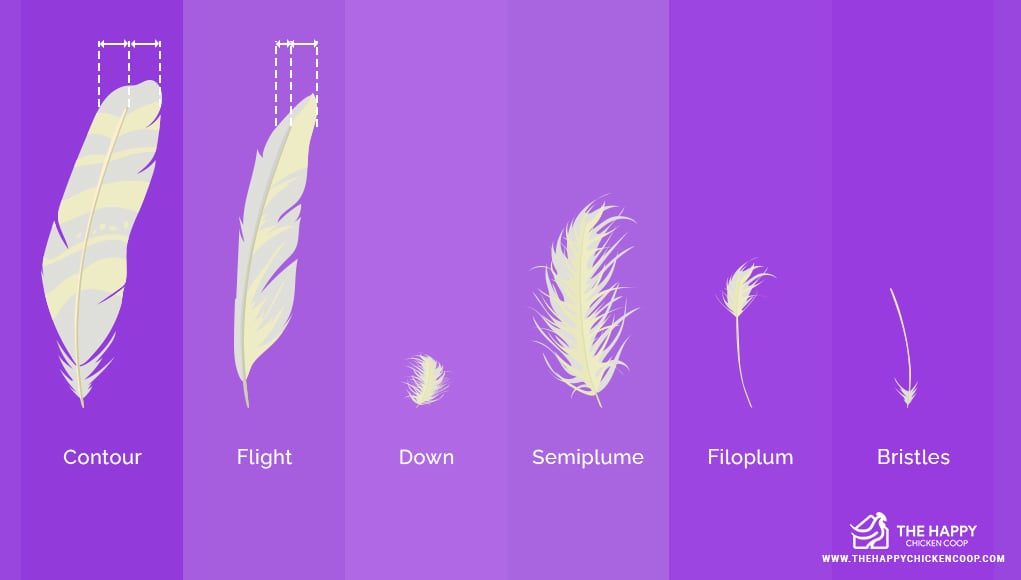 How Do Hens Make Chicken Feathers?

Feathers are made almost entirely of keratin– a type of protein. Beaks and claws are also made of keratin.

The uses of feathers to the bird are many, some not as obvious as others. They are solid yet lightweight. About 10% of the total weight of the bird is feathers! 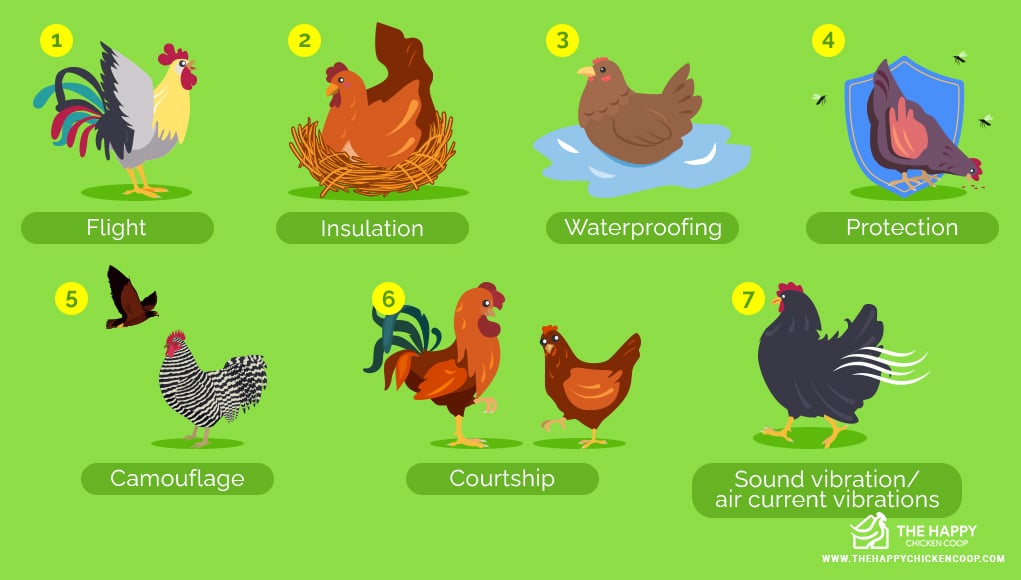 While chickens cannot fly far, they can use their wings to escape predators, fly to hidden roosts, and as a scare tactic if attacked.

They help to keep the bird warm in winter and cool in summer. The fluffier the feathering, the more cold-tolerant the chicken usually is.

For example, the Buff Orpington is extremely well-insulated due to the density of her feathers. On the other hand, tight feathered birds do not fare as well in the cold weather.

Feathers can shed off an amazing amount of water. Obviously, ducks reign supreme at this!

They help protect the skin against all manner of weather and insects.

Feathers also make it difficult for predators to grab hold and kill their prey. So, in a sense, they also protect chickens from attacks.

Many birds use their feather coloration to blend in with their surroundings. You may not realize it, but a snazzy black and white Dominique rooster is actually quite difficult for a hawk to see.

Not so much in chickens, but in many avian species, the color and use of plumage in courtship displays will determine who gets to mate.

If you’ve ever seen a rooster do his dance for the ladies, you’ll notice he throws out one of his wings and dances around her.

He’s trying to show her he’s in charge and also trying to impress her with his plumage.

Structures called Herbst’s corpuscles at the base of the feather are thought to detect changes in the air current and sound vibration.

Naturally, both of these talents are very useful to a prey species like chickens.

Anatomy of a Chicken Feather

The feather is a simple structure to look at. The way that it is put together, however, is far from random or simple.

There are a few different types of feathers, and here is a brief description of each.

Contours- As the name suggests, this is what gives the bird its shape and main color.

Flight- Flight feathers are specialized contour feathers. Sub-divided into primary and secondary flight feathers on the wings, together, they are known as the remiges.

The tail flight feathers are known as rectrices. 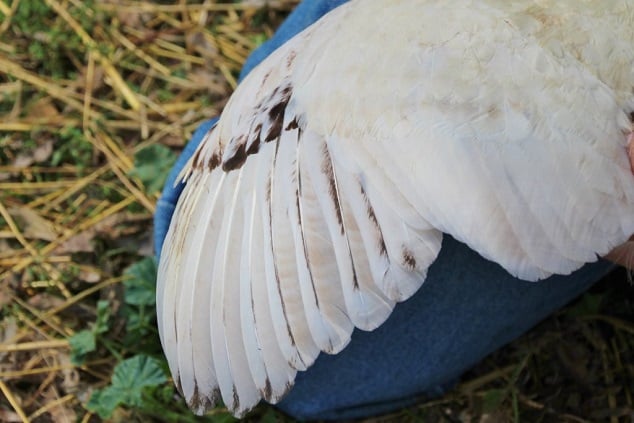 Down- These feathers are found at the base of the contour feathers and cover the bird as insulation. These are the same feathers you can find in a down jacket.

Filoplume-These are tiny, wisp-like feathers that grow around the base of contour and semiplume feathers.

These feathers, unlike the other feathers, are attached to nerve endings. It is thought that they provide the bird with information about the condition of their feathers.

Bristles- You will notice these around the eye and head- it’s believed they play a sensory role.

Map of the Chicken Feather

Extending outwards from the rachis is the feather vane. The vane consists of interlocked barbs.

The barbs are further divided into barbules and eventually hamuli or hooklets.

The hooklets are cleverly designed to hold the individual barbs together to form a continuous plane.

When a bird preens, they re-arranges its feathers into a smooth surface ready for flight or display.

Now that you know 90% of a feather is protein, you can better understand why egg production decreases or stops during the molt!

Adult molting season usually starts around the Fall but can be much later.

Chicks will have three mini-molts before getting their ‘big girl’ feathers at around 12-14 weeks.

The bird needs those feathers to stay warm. The bird would need them to evade predators in a wild environment, either by flying or camouflage.

Feeding your flock high-quality, high-protein feed during the molt is essential for their wellbeing. Calcium should also be freely available.

Mans’ use of Chicken Feathers and Other Feathers

Humankind has always had a fascination with feathers. In the early part of the last century, we hunted some birds to near extinction just for their feathers!

Feathers are still used in some religious ceremonies, herbal remedies, and in the decoration of clothing and homes.

Here are a few more uses you may not know about:

Birds are unique, and feathers make them so. The feather has given them dominion over the skies.

We always notice things like the coloring of the feather- but next time you see a feather on the floor, pick it up and truly appreciate its beauty.

The outward beauty of the feathers is varied and can range from stunningly beautiful to drab; the most stunning plumage usually belongs to the male of the species.

Remember, when your hens molt, it takes a lot of their protein, so don’t be too upset if they stop laying for a few weeks!

Read Next:  When Will My Chicken Start Laying Eggs?

10 thoughts on “The Miracle of Chickens’ Feathers”