Chickens are an amazing addition to every homestead or small farm but unfortunately many other animals like them just as much as we do.

While many people choose to keep their chickens safely cooped up not all breeds can handle the confinement.

Others were bred particularly for their ability to forage and free-range, so cooping them defeats the purpose.

Dogs have always been a popular livestock guardian animal, but the amount of training and overall investment can be a bit more than some people want to deal with.

Not all livestock guardian dog breeds are suitable for protecting chickens and other poultry, either. Many were bred specifically to watch sheep or goats and will ignore your birds.

Another animal that has become popular as a chicken guardian is a goose!

Geese are notorious for being aggressive or protective and they can be surprisingly intimidating to a would-be predator.

As it turns out – YES! Raising Geese to protect chickens is a great idea. A single goose that is raised with chickens can often be quite the protector!

Not only are they instinctually watching the sky for flying predators, but they’ll try and break up squabbles between chickens and even run off-ground predators.

Of course, there is always the chance that your goose could be attacked and killed by one of these predators.

Roaming dogs can be determined enough to take on a goose and a hungry raccoon or hawk might be driven to grab a bite.

Even if the goose is not able to “fight” off a predator it may be noisy enough to get your attention! They can honk loudly if they see anything dangerous and that may be enough for your chickens to run for cover.

If you want to get nit-picky you might consider geese more of a watchdog than a guard dog, but either way, you might have safer chickens!

You will still need to close your geese up at night to keep night predators, like foxes, from picking them off.

Do You Need to Train Geese?

Luckily geese don’t need to be trained to protect their flock as a dog would. They bond with other birds and if those birds happen to be a bunch of chickens so be it!

It is recommended that you only raise one goose to protect your chickens because geese have a tendency to band together and ignore the chickens.

Granted, a flock of geese could still be intimidating to some predators even if they weren’t outwardly protecting the chickens.

Many landscapers and delivery people have stories of being run off by a group of angry geese! Their reputation for being aggressive is well-deserved. 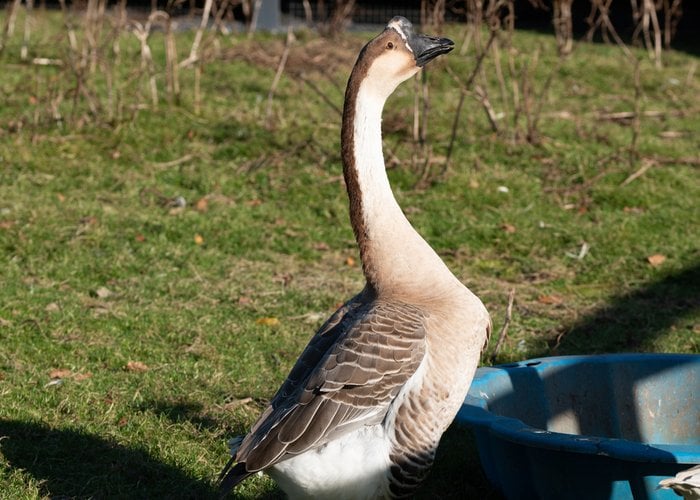 What Breed of Goose Protects the Best?

All geese are territorial, but a handful of breeds make the top of different lists.

The African goose is a large, loud bird that is actually of unknown origin. They’re related to the Chinese geese and come in white and a grayish color.

They have a large black knob at the top of their bill that takes years to fully develop.

Chinese Geese are similar to the African but smaller and less bulky. Like their cousins, they have a knob at the base of their upper bill, but the shape is different.

You can find both brownish and white versions, much like the African.

Roman Geese are small, usually white, and have a tuft of feathers on their head. You may see them called Tufted Romans because of this unique characteristic.

Their history goes back thousands of years and one was said to have helped alert the Romans to Gaul’s attempt to sneak into the city at night. They are understandably said to make excellent “watchdogs”.

Pomeranian Geese are a beautiful breed from Germany and have a range of colors. You can find white, grey, saddleback grey, and saddleback buff, but only the saddleback varieties are found in the United States.

They’re known for being noisy and good at alerting people to visitors and predators. 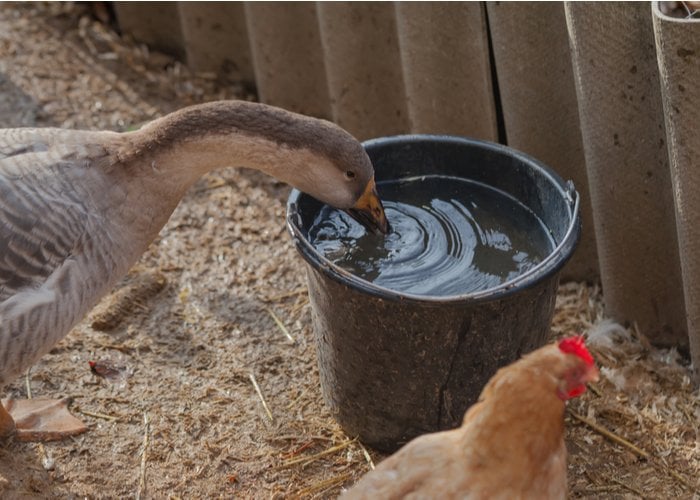 They’re both poultry, but geese do require different considerations than chickens! One major thing you need to remember is that geese absolutely need to dip their whole beak in water.

Chicken waterers usually have just enough for them to dip the tip of their beak in and you might even use nipple style sippers.

Geese have to be able to clear out their nostrils and to do this they need water that’s deep enough to dunk their beak and head.

They don’t need to be able to swim, although they’d probably like that option. If you don’t provide your geese with deep water their nostrils may clog!

Baby chicks in a brooder can be pretty messy, but they’re basically clean compared to goslings! Baby geese love to play in their water and can quickly trash a pristine enclosure.

Expect to be constantly cleaning their bedding, feed, and water.

A surprising way that geese differ from chickens is their diet. While this makes sense, it’s actually more striking than just “land bird vs. water bird”.

Geese can actually survive just fine on foraged grass as long as you have enough!

The all-grass diet can be tricky in the winter, but whole wheat and hay can be a great substitute. Layer geese will need access to extra calcium or layer pellets, but too much high-calorie food can lead to excess weight.

Lastly, geese don’t roost like chickens at night! This means you’ll need to provide a safe, dry place for them to sleep.

You will also need to be sure that the coop has adequate ventilation to let all the humidity they bring in escape.

You can use bedding like straw or pine shavings but try to avoid keeping their feed and water inside! They’ll make a mess either way but can do a lot more damage in less time with extra ingredients to stir in. 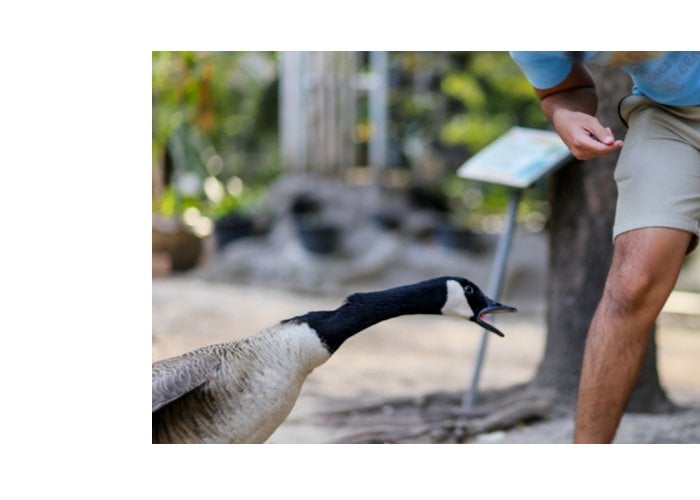 The Problems with Geese

If you’re dealing with daytime predators then geese are probably starting to sound pretty good!

Sure, they can be a little messy, but it can be worth it to stop losing chickens. Whenever considering a new livestock species you should consider all the pros and cons!

Raising Geese to protect chickens because they are protective and territorial, can be a double-edged sword!

While they may intimidate many predators and alert you to changes, they may also attack and run off people who are supposed to be visiting.

Some geese have been reported to attack delivery people or passers-by on their bikes or on foot. Some of these attacks have even resulted in broken bones!

An elderly woman was knocked over by a goose and broke her pelvis. In another case, a man was attacked while trying to escape on his ATV and broke his leg.

A fairly awkward problem with geese is that the genders may try and mate with hens.

Ganders have different reproductive anatomy than roosters in a way that is not compatible with chickens.

This difference along with the size difference can result in the death of the hen.

As mentioned earlier, you’re better off only keeping one goose for chicken protection because a group of geese may wander off together leaving their charges vulnerable.

On some occasions, geese may actually be aggressive toward chickens! People have reported that their geese have attacked or run off their other poultry, which defeats the whole purpose of a guard goose.

Geese to Protect Chickens In Conclusion

Geese can be a great watchdog or alarm to help protect your chickens, but you should pay close attention to their limitations and the special care required.

They can be cheap to feed and fun to watch, but they may be vulnerable to predators of their own.

If you have small children or expect to have a lot of visitors, you may want to avoid having something so territorial and aggressive.

If you have the grassy space and could use a predator alarm, then a goose could be the perfect homestead addition for you! 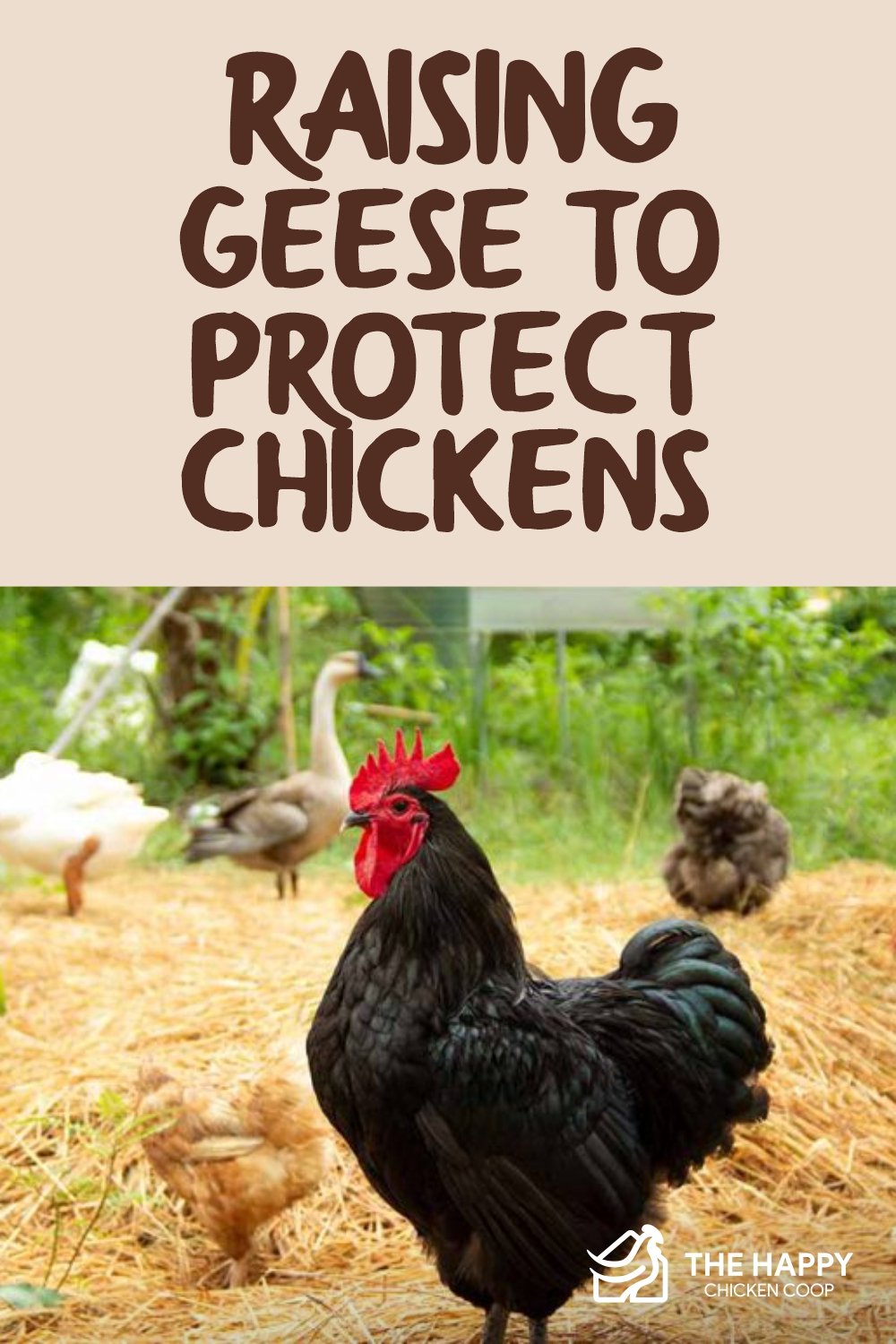