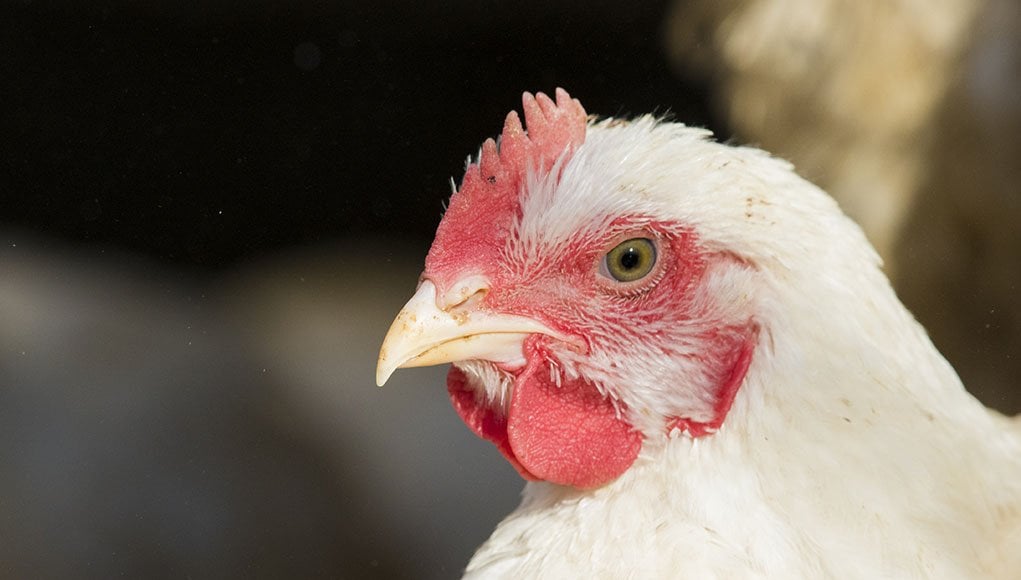 When you go to the grocery store or market, the chicken you find is most likely a Cornish Cross!

This was the “breed” that revolutionized how people eat chicken in the United States and many other countries.

Chicken dinners used to be more of a special occasion meal, but once you developed this fast-growing, efficient cross, it made chicken meat cheaper and more accessible.

So, what is a Cornish Cross, and is it a breed? Are they suitable for a small farm or your backyard coop? Do they require special care? You may have many questions, or even concerns, about this ubiquitous chicken!

The Origins of the Cornish Cross

The person credited with the start of the meat bird craze was a woman named Celia Steele from Delaware.

While her husband was working for the Coast Guard, she decided to bring in a little extra money raising chickens for meat.

This side project quickly blossomed into something bigger, and by 1926 she had to build a 10,000-birdhouse to raise them!

As broilers became more popular, the “Chicken of Tomorrow” contest was started with support from the United States Department of Agriculture.

People would send their broiler eggs to hatcheries, where they would be hatched, raised, and then rated based on their meat production and feed conversion efficacy.

The winner in 1948 was a White Plymouth Rock bred by Henry Saglio from Connecticut.

Another top broiler was a Red Cornish cross from Vantress hatchery, and eventually, they merged them to form the predecessor of the modern Cornish Cross. 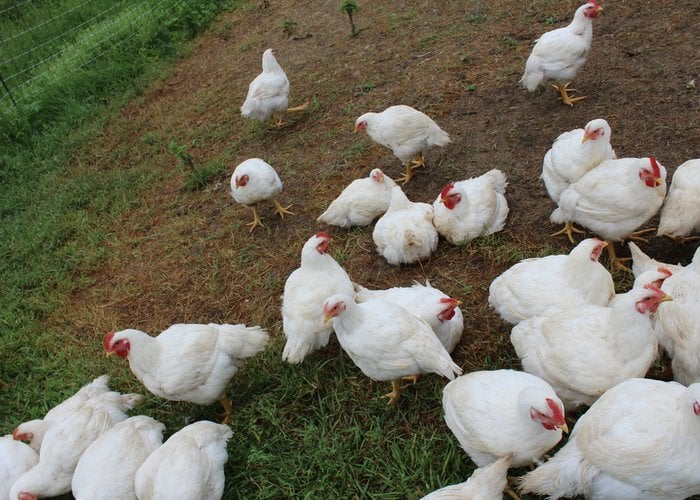 Not All Cornish Cross Are Alike

There are different commercial strains of Cornish Cross with other characteristics. The most common are the Cobb 500, Ross 308, and Ross 708.

All three are white-feathered with yellow legs, but the Cobb 500 has a rounder appearance and sometimes has black flecks.

The Cobb 500 and the Ross 308 are selected for their plentiful breast meat and are often listed as “Jumbo Cornish Cross.”

The Ross 708 has more of a balanced meat distribution instead of being somewhat breast-heavy.

They start growing more slowly, but they catch up with the other strains in later weeks. You may see these called the “Cornish Rock.” 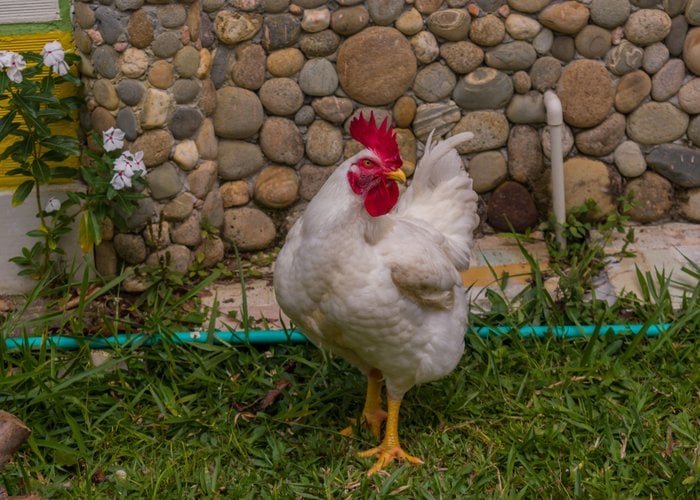 If you want to raise broilers for yourself or on a small scale, you may wonder how easy it is to find and buy these different strains of Cornish Cross.

Luckily, some of the larger hatcheries out there sell them! You will have to check which strain they sell, and not all of them have it listed on their website.

Once you’ve decided which strain you want and found your hatchery, you’ll want to familiarize yourself with raising commercial broilers! These are not your typical backyard chicken and do have some differences.

One of the reasons this breed has been popular is that they grow fast! You’ll need to process them around 8-9 weeks of age or 10 weeks at the latest!

They were selected to get big FAST, which means they get too large to be comfortable past a certain point. They will eat a lot if allowed and are known to develop leg and heart problems.

The Cornish Cross doesn’t forage like other chickens and would prefer to wait for you to fill their feeders. They also drink a lot more than you’d expect, so be sure to offer them more water than you’re used to.

On top of their fast growth, ravenous appetite, and incredible water consumption, they also poop A LOT more than you might expect!

Not only that but their poop stinks! Meat birds need a higher protein diet which results in astonishingly smelly droppings!

Since they’re so “dirty” and need a lot of feed and water, they require a great deal of daily care, but luckily you don’t have to do it for long!

After a couple of months, they need to go to the processor, and you will have a well-stocked freezer for quite a while afterward! 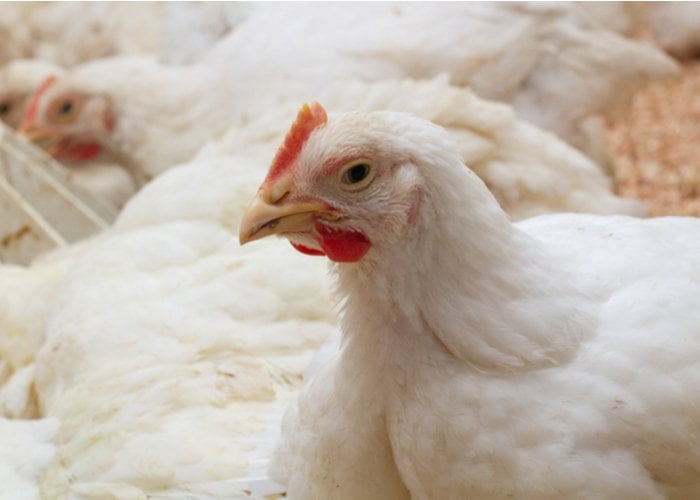 The Problems with Cornish Cross

You’ll need to consider a few problems with the Cornish Cross (when it comes to homesteading) before buying them!

As mentioned, they are a bit more labor-intensive than other breeds. They are better off having their feed somewhat restricted after a few weeks, so you need to adjust how long they have access or how much you give them at once.

You can’t just fill their feeders and let them eat to their hearts’ content because they WILL overdo it, and the consequences can be fatal.

They also benefit from getting some exercise, so you might consider giving them more space to walk than an enclosed chicken tractor or coop.

This exercise can help them stay more mobile and have more minor health issues as they’re growing.

You also have less time to decide how to have them processed because they grow so ridiculously fast. It’s best to have everything planned out or prepared before buying the chicks!

You also have to make sure you have enough freezer space for all those birds because they’ll be BIG. If you raise 50 broilers, they certainly won’t fit in the freezer side of your kitchen fridge.

Cornish Cross chickens are also pretty terrible at free-ranging! They are big, slow, clumsy, and not exceptionally bright. They’re sitting ducks (get it?) for any predator and need you to protect them from everything.

On top of all that, they’re not particularly hardy. They don’t handle heat OR cold well, so you need to baby them.

You have to pay close attention that they’re comfortable and clean, have enough food but not too much, and get enough space to move without leaving them vulnerable. 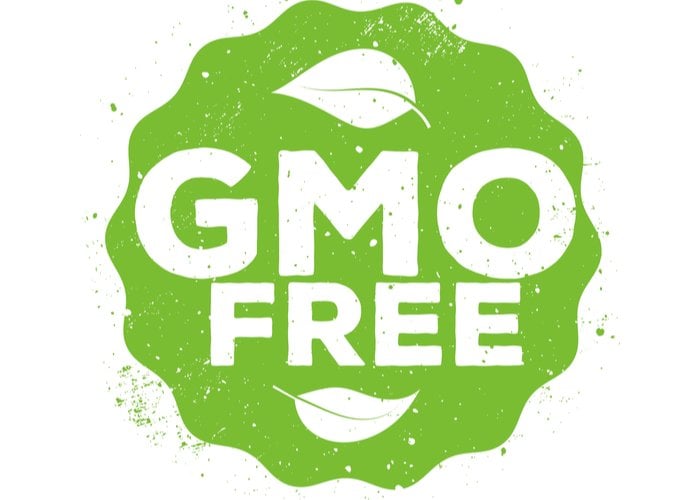 Genetically modified organisms (GMOs) are organisms that have had their DNA modified or changed in a way that doesn’t use breeding.

That means that Cornish Crosses are NOT GMO! Yay! They haven’t had DNA manipulated in a laboratory-like fluorescent fish and mice or the phosphorus digesting Enviropig.

Cornish Cross chickens are created through selective breeding – the same way that other breeds of animals are developed!

While the actual “formula” is kept pretty secret, they weren’t engineered in a laboratory and didn’t have DNA from other organisms. 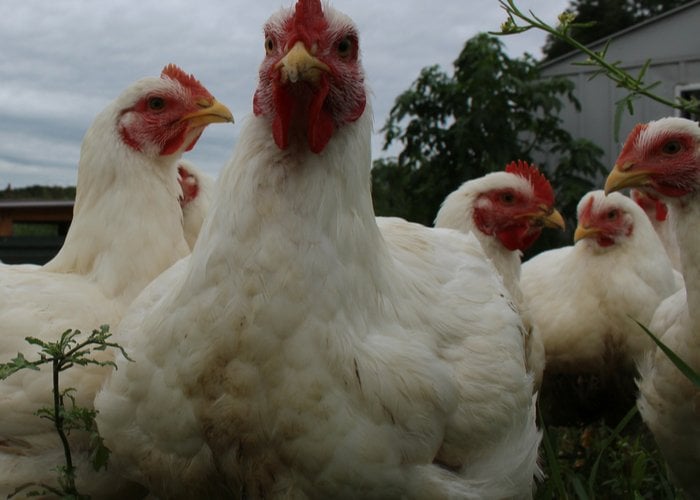 Is our Cornish Cross Suitable for Self-Sufficient Homesteads?

If you are trying to plan out your homestead and want chickens that will allow you to be self-sufficient, you probably shouldn’t buy any Cornish Cross!

These birds are intended to be processed at a certain age and cannot be reliable for breeding. It is very labor-intensive to keep them healthy long-term, which is not in your best interest if you’re busy running a homestead.

Since Cornish Crosses are crossbred birds, they won’t breed true. This means if you successfully keep some long enough and manage to get them to produce fertile eggs, you won’t get consistent birds.

While they’ll still probably be more significant than your typical heritage breeds, some will be on the larger side, and some may be somewhat small.

Cornish Cross can be an excellent choice if you’re okay with purchasing chicks regularly and just raising to stock your freezer.

If you want a breed that can perpetuate itself and survive well, you should try to find heritage meat or a dual-purpose breed.

There are also some rarer heritage meat breeds out there, like the Barbezieux, Bresse, and Crevecoeur, if you want something more interesting.

Many large hatcheries and feed stores offer other varieties of meat chickens. Some of these are crosses that are better suited for pastured poultry operations.

Freedom Rangers are a bit slower growing than the Cornish Cross but does better on free-ranging on pasture.

There is a lot to consider when you want to raise chickens for meat, but the winner of sheer meat production is the Cornish Cross!

They’re the fastest to grow and the cheapest to feed, but they require some special considerations.

If you want to raise broilers on pasture, you might consider some of the slower-growing breeds available since they are better adapted to that environment.

Whichever direction you go in your meat bird operation, there is a fantastic option waiting!

READ NEXT: How to Raise Meat Chickens