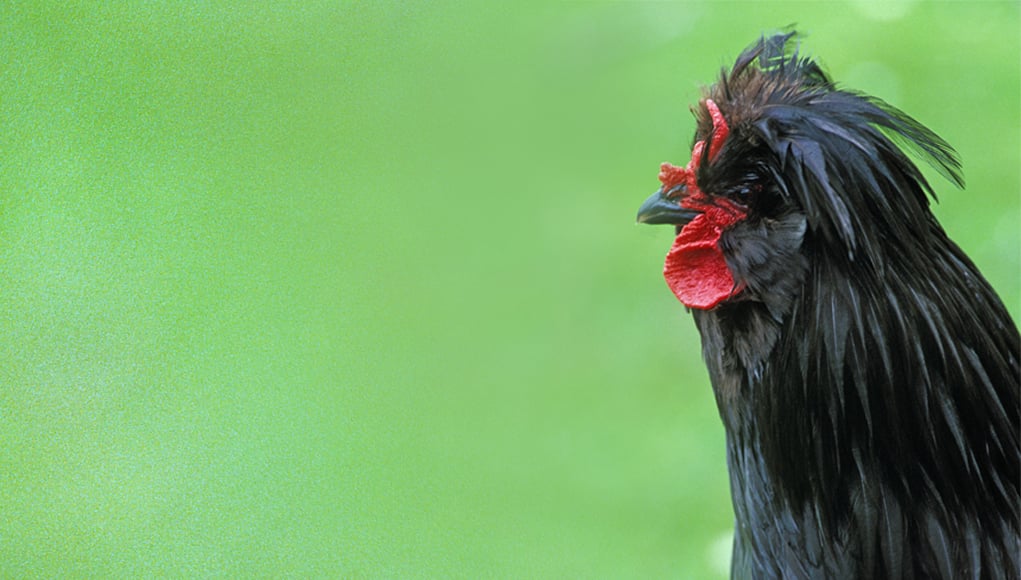 Chicken keeping is becoming an increasingly popular hobby across the United States. There are many different chicken breeds to choose from, each with its own unique personality and set of attributes.

Today, we’ll be taking a look at the Crevecoeur chicken breed.

The Crevecoeur is a dual-purpose bird that is considered both productive and ornamental. They are known for being calm and docile, making them an ideal choice for backyard flocks.

Crevecoeur’s are also good layers, averaging around 200 eggs per year. Their feathers are a beautiful black color, which makes them a popular choice for show birds.

If you’re looking for a friendly, low-maintenance chicken breed, the Crevecoeur may be the way to go.

Crevecoeur Chickens: What Are They?

Crevecoeur chickens are a breed of chicken that is known for their black and white feathers.

The breed was named after the French town of Crevecoeur-en-Auge, where it was first developed. This was a town in Normandy. Besides its name, very little else is known about the breed.

Crevecoeur chickens are considered a dual-purpose breed, meaning that they can be used for both egg production and meat. The breed is known for being hardy and adaptable, and for its friendly disposition.

While Crevecoeur chickens are not as common as some other breeds, they make excellent pets and can provide a bountiful supply of eggs and meat.

If you are looking for a unique chicken breed to add to your flock, consider the Crevecoeur chicken.

History of the Crevecoeur Chicken Breed

The Crevecoeur chicken is a French breed that gets its name from the village of Crevecoeur-en-Auge in Normandy. The breed was created in the 18th century and was initially used for fighting.

However, it was later discovered that the Crevecoeur chicken was well suited for egg production. It became a popular choice for farmers.

The breed is known for its large brown eggs, and it is also considered to be a good mothering chicken.

Today, the Crevecoeur chicken is considered to be a rare breed, but it is still prized by those who are lucky enough to own one. 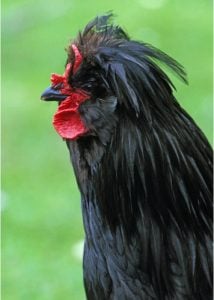 Crevecoeur chickens are a French breed of chicken that is known for their striking appearance. The most distinctive feature of the Crevecoeur chicken is its black plumage, which covers almost every single part of its body besides its legs.

It has short legs and a well-proportioned body, making it look compact. It has a moderate-sized crest that is attractive without being ostentatious.

The bird has a unique look that is sure to turn heads.

In addition to its plumage, the Crevecoeur chicken also has a relatively long tail. This, combined with its upright stance, gives the bird a regal appearance.

While the Crevecoeur chicken is not the largest breed of chicken, it is still a sizable bird that can weigh up to 7 pounds for hens and around 8 pounds for roosters.

It was formally recognized by the American Poultry Association in 1874.

Due to its impressive appearance, the Crevecoeur chicken is often used in poultry shows. However, this breed of chicken is also well-suited for backyard flocks.

Thanks to its friendly nature, the Crevecoeur chicken makes an excellent pet chicken.

If you are looking for a chicken that is both beautiful and good-natured, then the Crevecoeur chicken may be the perfect breed for you!

How Many Crevecoeur Chickens Are Left?

The Crevecoeur chicken is a rare breed of chicken that was once popular in France. The breed gets its name from the town of Crevecoeur-le-Grand, where it was first developed.

The Crevecoeur is a small chicken, with a body that is enclosed by feathers that are black, white, and brown in color.

The breed was nearly extinct by the early 21st century, but there has been a resurgence in recent years.

The breed was, for a long time, quite popular in France though not well-supported around the rest of the world.

It is the oldest French chicken breed known in England and while it reached America before 1874, it wasn’t really well-known here until then.

Today, there are an estimated 200 Crevecoeur chickens remaining in the world.

While this number is still quite small, it is encouraging to see that the breed is no longer in danger of disappearing entirely.

The Crevecoeur chicken is a French breed that is known for its docile and cheerful disposition. These birds are excellent layers of white eggs and make great pets.

They are also very hardy and able to withstand cold weather and harsh living conditions.

Crevecoeur chickens can adapt to most climates. They are quiet, peaceful, and deliberate, withstanding confinement quite well.

The Crevecoeur was once a very popular breed in France, but it is now quite rare.

However, those who have the chance to keep these chickens often report that they are friendly, curious birds with unique personalities.

If you are looking for a chicken that will bring some joy into your life, the Crevecoeur is a great choice.

What Are Crevecoeur Chickens Raised For?

The breed was first developed in the early 18th century and was originally used for both egg production and meat production.

However, the bird’s light body weight made it unsuitable for large-scale meat production, and it slowly fell out of favor with commercial chicken farmers.

Today, the Crevecoeur chicken is primarily kept as a pet or for exhibition purposes. Nevertheless, the breed remains popular in its native France, where it is considered to be a national treasure.

The bird’s unusual appearance and pleasant disposition make it a favorite among poultry fanciers around the world. 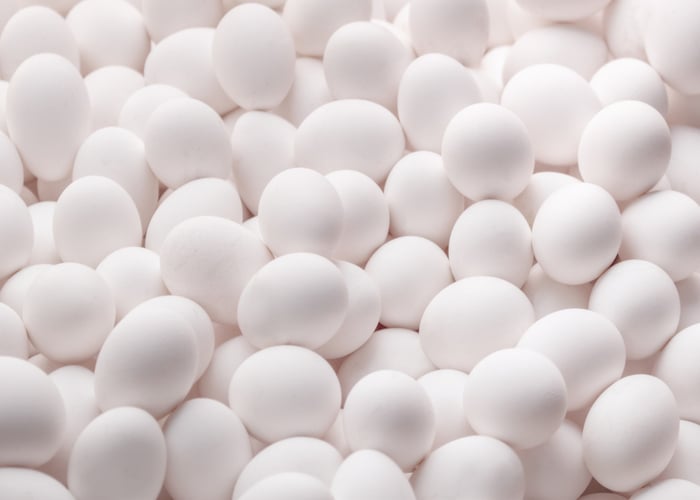 What about laying ability? Are Crevecoeur chickens good layers?

The answer seems to be yes. Although they don’t produce quite as many eggs as some other breeds, they are still reliable layers.

Their eggs are large and of good quality. In addition, they are relatively low-maintenance chickens, so they make a great choice for those who are new to chicken keeping.

So if you’re looking for a breed that is both attractive and productive, the Crevecoeur chicken may be the perfect choice for you.

ALSO READ: 10 Breeds of Chicken That Will Lay Lots of Eggs for You

Can You Raise Crevecoeur Chickens for Meat?

The Crevecoeur chicken is a popular breed of chicken that is known for its friendly personality and lovely egg-laying abilities. However, many people don’t realize that the Crevecoeur can also be raised for meat.

These chickens are relatively large, with hens typically weighing around six pounds and roosters around eight pounds.

They also grow relatively quickly, meaning that they can be ready for slaughter in as little as five months or so. In addition, the Crevecoeur’s dark meat is considered to be very flavorful.

In fact, in France, Crevecoeur chicken meat is something of a delicacy. These birds have small, fine bones that make the slaughtering process quite simple and the proportion of meat to offal is quite high. This means you’ll have less waste.

The skin is white and fine in the breasts, while the leg meat is known for being dark and duck-like in its texture, color, and flavor.

The birds fatten readily, something that lends to their popularity in France. Because they grow quickly, the French are fond of stuffing them.

This means making them eat more by inserting a tube into their mouths with a special wet mash as a dietary supplement (similar to how foie gras is produced).

As a result, this breed can make an excellent choice for those who want to raise chickens for meat.

Of course, as with any animal, it is important to ensure that the chickens are raised humanely and given plenty of space to roam.

But if these criteria are met, the Crevecoeur can be a delicious and rewarding addition to any farm or homestead. 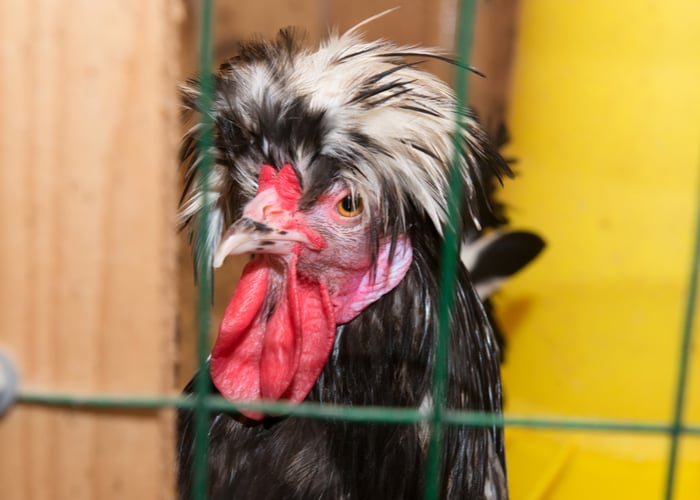 The Crevecoeur is considered a hardy breed and is known for being a good egg layer.

However, the breed is also susceptible to a number of health and wellness issues, including Marek’s disease, avian influenza, and Newcastle disease.

Despite their diminutive size, Crevecoeur chickens are hardy birds that can withstand cold weather and are relatively resistant to disease.

However, like all chickens, they are susceptible to health problems if they are not properly cared for.

Other common issues include respiratory infections, parasites, and feather loss. Furthermore, because of their moderate size, Crevecoeur chickens can be easily injured by other birds or animals.

The unique crest atop each bird’s head is attractive, to say the least, but it’s important to be mindful of the conditions in the coop. If it’s too wet outside and your birds get these features wet, it can be tough for them to dry off.

Consequently, it is important to provide them with a safe and secure environment.

As a result, it is important for those who are considering keeping this breed to be aware of these potential health concerns.

The Crevecoeur chicken is a French breed that is known for its ornamental feathers and egg-laying abilities. They are hardy birds that can withstand cold weather and have a docile personality, making them a good choice for backyard flocks.

However, there are some drawbacks to raising Crevecoeur chickens. They are not as heat-tolerant as other breeds and can become stressed in hot weather.

Additionally, they are not as prolific egg-layers as some other breeds, so they may not meet the needs of those looking for a steady supply of eggs.

While they can be raised for meat, they are smaller than many commercial meat production breeds and may take longer to reach maturity (as is the case with most heritage breeds compared to hybrid chicken breeds, like the Cornish Cross).

Therefore, although you’ll get a bit of both when it comes to egg-laying and meat production, the Crevecoeur chicken isn’t the best of both worlds by any means.

Overall, the Crevecoeur chicken is a beautiful bird with many positive qualities, but it is important to be aware of the potential downsides before adding them to your flock. 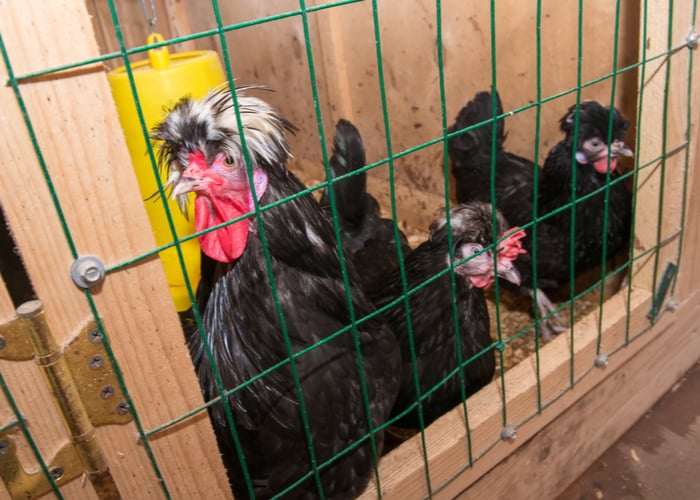 How to Care for Crevecoeur Chickens

Crevecoeur chickens are a beautiful breed of chicken originating from France. They are known for their black and white feathering, which is said to resemble a piebald horse.

These chickens are dual-purpose, meaning they can be used for both meat and eggs production.

They are also relatively calm and docile, making them a good choice for backyard chicken keeping. Here are some tips on how to care for your Crevecoeur chickens:

The Crevecoeur chicken breed is an excellent dual purpose bird that can provide both meat and eggs.

They are cold-hardy birds, making them an excellent choice for those living in colder climates, and they are also quite adaptable to different management styles.

Do you have any experience with this breed? Let us know in the comments below!

READ NEXT: 14 Black Chicken Breeds You Can Easily Raise