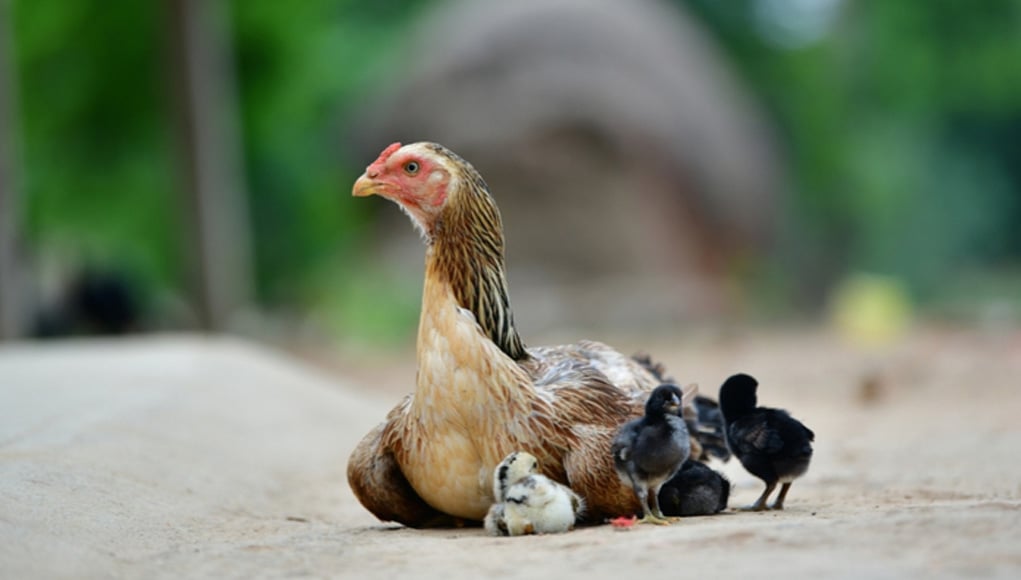 Have you heard about Ayam Kampong chicken? If you’re familiar with Ayam Cemani, you’d know that these breeds both came from Southeast Asia. But unlike Cemani which sports black plumage throughout its body, Kampong chickens come in various color selections.

Do you want to know more about this organic breed?

Well, you came to the right place. Today, we’ll share with you some insights regarding:

We’ll also help you weigh if this breed is for you. But before that, let’s look back at its past and how it came into existence by rediscovering its unglamorous history.

Ayam Kampong’s origin can be traced back to Indonesia and Malaysia. Its name literally means “village chicken.” But in Indonesia, “Ayam Kampong” refers to indigenous chickens raised in a traditional free-ranging method used by most villagers.

This bird is a product of the uncontrolled breeding of indigenous Southeast Asian breeds of red jungle-fowl chickens. But others were bred with exotic chickens imported to the country in the late 1800s by Europeans, mostly Dutch and British settlers.

Nowadays, people keep this breed as a pet or dual-purpose chicken, simultaneously selling their meat and eggs. But others use it for the sacrificial offering. 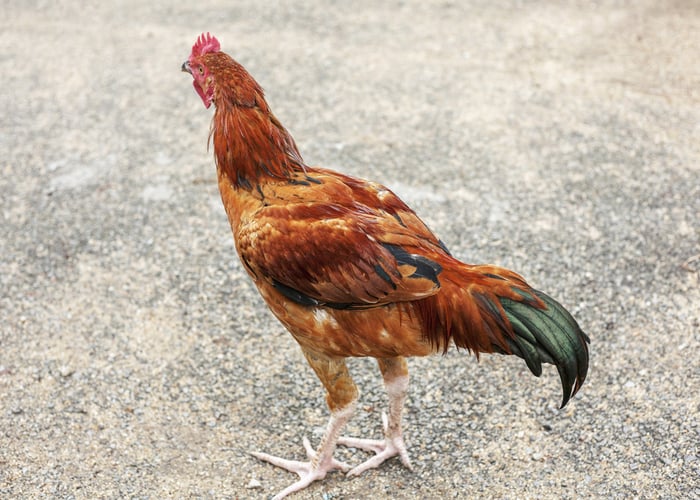 There’s no specific breed standard regarding Kampung chickens. But here’s a brief overview of what is kampong chicken and its usual appearance/ physical characteristics.

Ayam Kampong is available in various colors. One of the most prominent ones is the black-breasted red Kampong which sports a black body with red hues on the wings and breast. The plumage in their neck often has an orange hue while their comb is red.

Their tail is usually black with a greenish hue, and their feet are typically yellow.

You may also find mottled Ayam Kampong chickens with a red comb, wattles, and black legs with a greenish hue.

On the other end, some Ayam Kampong displays a wheaten plumage with stunning feather patterns on their hackles that goes down to their tails. 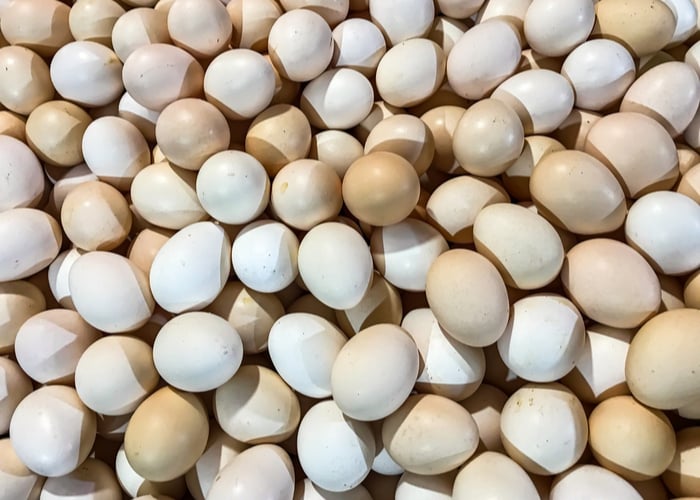 Ayam Kampong is considered a dual-purpose breed. It provides tasty meat and eggs for many people in rural areas of Indonesia and is a staple in Indonesian cuisine. This bird reaches market weight of 1 to 1.5kg in three to four months.

But it’s not a prolific egg layer.

Ayam Kampong hens can only produce around 55 to 100 light brown eggs annually, averaging 39 grams. So, it can’t provide enough eggs for daily consumption.

This poor performance is due to Ayam Kampong chicken’s broodiness.

Despite that, Kampong chickens are still consumed on most family occasions and celebrations.

These birds are generally healthy and not prone to any genetic diseases.

However, suppose you’re planning to raise this kind of bird. In that case, you must protect them from chicken diseases caused by avian influenza, coccidiosis, helminths, and other pathogens like Salmonella and Campylobacter.

These pathogens usually occur in dirty and poorly-managed poultry farms.

Now that you know how many eggs and meat can Kampong chickens produce and what they look like, are you convinced to add them to your flock? If yes, keep these things in mind to ensure they get the best possible nutrition and home.

The chicken’s feed can affect Ayam Kampong’s meat quality, so you shouldn’t give them cheap food. We recommend feeding them organic grains and nutrition to keep their meat tasty.

Like other chicken breeds, Ayam Kampong also needs a comfortable and clean chicken coop with enough ventilation and bedding.

You also need to put up fences if you’re keeping them to contain them in your area and avoid causing trouble to your neighbors.

Is Ayam Kampong Chicken Breed For You?

There are many things to consider before answering this question. Aside from its egg-laying capabilities and the amount of meat it can offer, let’s ponder on its pros and cons to determine if this breed is suitable for your needs.

Ayam Kampong’s becoming more in demand every year. More and more Ayam Kampung cuisine is opening, implying that raising them can be a profitable business.

These birds contain more protein than ordinary broilers and heave less fat. So, it’s a perfect fit for those who want to eat and live healthily.

The breeds premium class comes at a premium price too. Broilers cost around 3 to 4 dollars, while Ayam Kampung chickens are about 6 to 9 dollars. This price tag can be too heavy on ordinary people’s pockets, making it unaffordable for the masses.

Since they thrive more if they can free-range, you have to provide a bigger space where they can forage and look for food on their own. 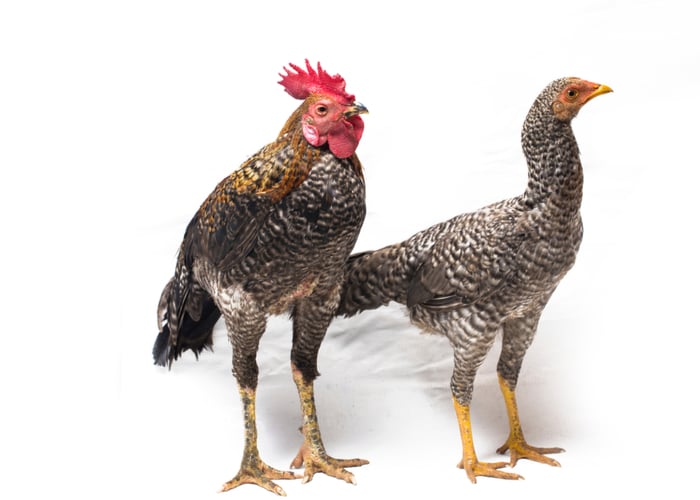 Alternative if You Can’t Find an Ayam Kampong Chicken

They’re more powerful and muscular than Kampong chickens, with an average weight of 4.5 to 6.5 pounds for males and 3.5 to 3.5 pounds for females.

However, they’re poor egg layers since they can only produce one egg per week and around 80 eggs per year.

If you’re not keen on black-skinned chicken and you want a prolific egg layer that’s still organic, Rhode Island Red may be the one for you.

It’s an American, not an Indonesian breed, but it produces brown eggs, just like Ayam Kampong.

Did you know that Ayam Kampong chickens…
love eating pebbles every time they look for their own food. But why?

If you spot your Ayam Kampong chickens eating pebbles, do not fret! They need that to digest their food properly and keep their digestive system healthy.

You may still have lots of questions about Kampung chickens but we compiled them for you and help you make wiser decisions.

Kampong chicken’s meat is usually less fatty, tastier, and healthier for human consumption because they’re traditionally fed with corn and free ranges. That’s why many locals prefer this bord over antibiotics-laced chickens.

The free-ranging method of raising Ayam Kampong is said to maintain health and promote growth in farm-bred chickens.

What is the difference between Kampong chicken and regular chicken?

Since Ayam Kampong chickens are usually free-range, their diet consists of bugs, stones, seeds, and corn instead of commercial chicken feeds. So, they’re a healthier choice than broilers and other commercially-produced chickens.

Not all Ayam Kampung chickens in Malaysia are organic. However, few breeders produce certified organic chickens and eggs by the Department of Veterinary Services.

The name itself means “free-range.” That implies that Ayam Kampong is usually raised using free-ranging techniques rather than confined in tight commercial coops.

Kampung chicken eggs are much healthier because they contain more vitamins and minerals than commercial chickens. 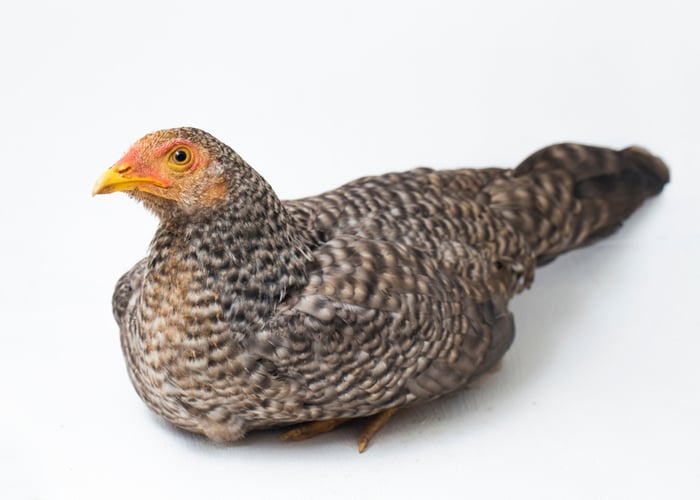 So, how does Ayam Kampong sound to you?

Its egg-laying performance doesn’t seem appealing which is why some breeders tend to overlook it. But if you want a colorful chicken with premium, tasty and flavorful meat plus high protein content, this is for you!

However, you have to know that raising this organic chicken may need a huge upfront cost for their forage area and feed.

But the good news is it’s so profitable, especially if you’re living near Indonesian restaurants and cuisines.

If this breed doesn’t capture your heart, you may find this next breed more interesting. It’s Kampong’s sibling breed but provides more meat.