4 Most Popular Bali Chicken Breeds and What You Should Know 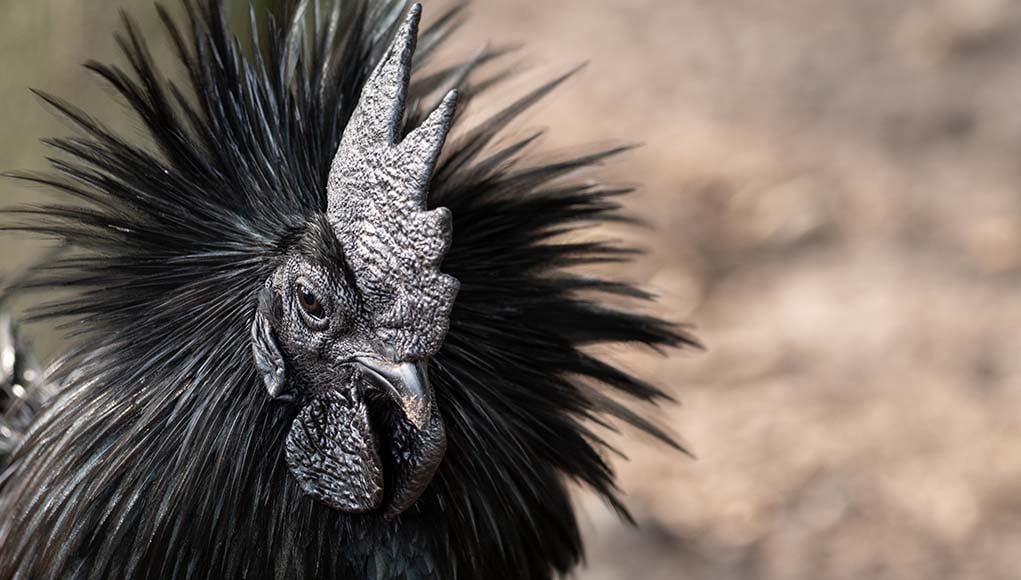 If you’re thinking about raising backyard chickens, you’ll have plenty to consider – but the Bali chicken breed list is extensive.

What is a Bali chicken breed? Why, one that was developed in Bali, of course! Several chickens are native to Indonesia, including Ayunai, Banten, Balenggek, Bangkok, Bekisar, Burgo, Cangehgar, Ceamni, Kedu, and more.

Chickens have been raised in Indonesia for many years.

While some (more than 34 breeds or distinct groups!) are presented for eggs and meat (about 11 of them), others are prized for their necessity in religious rituals, their beauty, and for more minor savory purposes, like cockfighting.

Bali chicken breeds are beautiful to look at – while they might not be the most productive in terms of their egg- and meat-producing abilities, they are tough, resilient, and incredibly alluring.

Native chickens in Indonesia are typically the result of many years of domestication of several breeds of wild chicken species, including Red Junglefowl, Green Junglefowl, Ceylon Junglefowl, and Grey Junglefowl.

In Bali, the Red Junglefowl is one of the most common wild birds. It is also believed to be the progenitor of most domesticated chicken breeds.

It’s native to East Asia, most of Indo-China, and the islands of Sumatra, Java, and – you guessed it – Bali.

You’ll find that most Bali chicken breeds have “Ayam” in the name, as this is the Indonesian word for Chicken.

Today, it can be challenging to purchase chickens from abroad, particularly Bali chickens.

However,  a few Indonesian breeds of chickens might interest you as you’re looking for rare birds to raise in your backyard. Here are some of the most common Bali chicken breeds to consider. 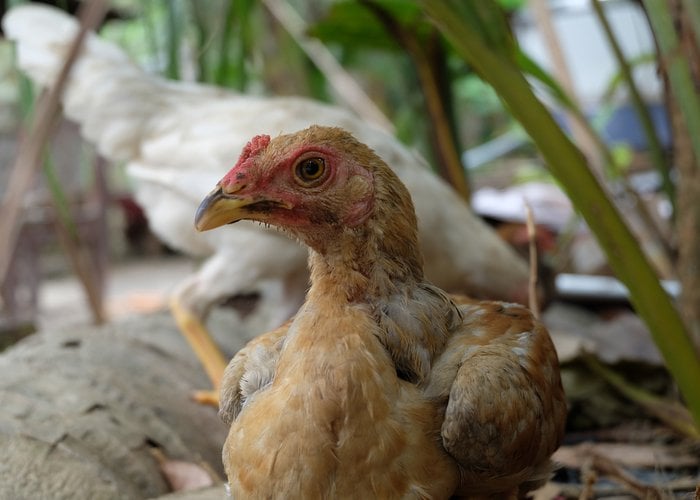 The Ayam Kampung, or Ayam Kampung, as it is sometimes spelled, is another Indonesian chicken breed. The name is simply translated as “free-range chicken” or “village chicken.”

Although we tend to recognize the Ayam Kampung as a distinct Bali chicken breed, in Indonesia, this phrase is sometimes used just for any population of indigenous Chicken that is being allowed to free-range.

It is highly diverse, resulting from the unfettered crossbreeding of Southeast Asian indigenous chickens, Red Junglefowl, and other exotic chickens of various genetic backgrounds imported by European settlers in the late 19th century.

The Bali chicken breed that we refer to as Ayam Kampong is a small dual-purpose bird that is slow-growing and not incredibly productive.

In rural areas, Ayam Kampung chickens are usually raised for meat and eggs, though they don’t offer eggs daily.

They usually only lay up to 100 brown eggs each year and weigh around a pound or two.

However, the meat is highly prized (often sold at a higher price than the meat from commercial breeds), and hens are considered quite valuable, as they frequently go broody and will hatch their eggs.

The Ayam Kedu is technically native to Central Java, but it’s often found in Bali. The video we included above is not educational. It is just to showcase the bird.

This chicken breed is one of the earliest ancestors of the Ayam Cemani, a species that we will discuss in more detail below.

Ayam, as we mentioned, means “chicken,” and “Kedu” is the name of a village on the Kedu Plain in Central Java.

This bird was locally developed in the Kedu region and is small, only weighing three or four pounds at most. It has unique brown-black eggs and black skin.

There are several Kedu chickens, including the Kedu black, which has a fully-black body and black feathers (but a red cloaca).

Another Ayam Kedu variety is the Kedu white, which maintains the black skin and body features but has a white coat of feathers. The Kedu red has a black and red comb.

A ritual bird in Indonesia, it is used in medicine in China. It can be purchased in the United States but for very high prices – often more than $100. 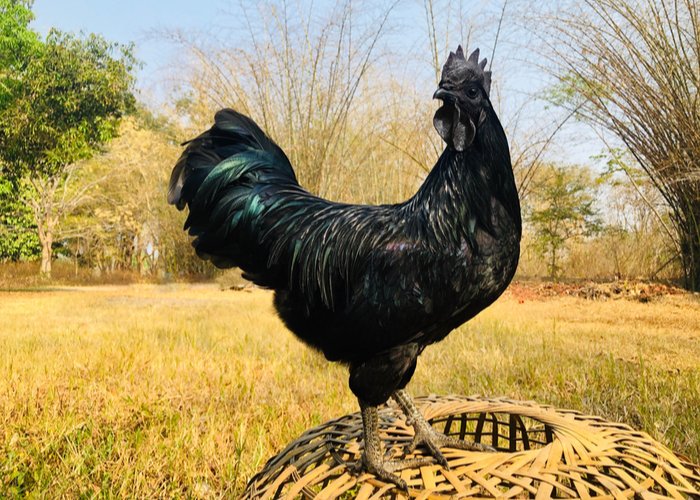 The Ayam Cemani is far from what you might consider a popular chicken breed, but it’s nevertheless one of the most popular when you’re considering Bali chicken breeds.

Although this bird is frequently raised in the province of Bali, it’s believed to have originated on the island of Java. It has been used since the 1100s in religious ceremonies and prized for its mystical purposes.

Take one look at this bird, and you’ll quickly understand. Ayam Cemani chickens have a unique gene that causes hyperpigmentation and an all-black appearance.

We aren’t just talking about the feathers – Ayam Cemani chickens have black beaks, feathers, and even internal organs.

First described by Dutch settlers, the Ayam Cemani was the only borough in Europe in 1998. It is kept in the Netherlands, Germany, the Czech Republic, Slovakia, and Belgium, and it can be shipped to the United States as well.

Since these chickens are so rare (and consequently, so expensive), they are not commonly raised for eggs and meat. They are not the best setter and do not usually hatch their broods.

However, suppose you are interested in starting your backyard flock of rare breed birds for exhibition or entertainment purposes only.

This Bali chicken breed is one you’ll want to consider for sure. It is stunning to look at (albeit a bit spooky)!

Bekisar, or Ayam Bekisar, is a breed of Chicken, a hybrid offspring of the Green Junglefowl and the Red Junglefowl.

Again, this bird is found on other Indonesian islands, like Java and Sunda, but can also be found in Bali.

This chicken breed was historically used as a spiritual or symbolic mascot on outrigger canoes. Because of this, it is now found in many other areas of the world.

This breed is unique because actual Ayam Bekisar chickens are hard to find – most hens are sterile.

However, there have been some backcrosses with domestic chicken breeds, so several landraces of Pacific chickens have Bekisar blood.

It is often found as a feral species on islands that are more remote or prone to typhoons. It has many natural predators, another reason why it is difficult to find.

It is kept in captivity in some Indonesian islands, though it is not commercially available from hatcheries, as is the Ayam Cemani.

Interestingly it is often used on islands like Esat Java and Bali for vocal competitions.

Of all the Bali chicken breeds on this list, the Malay is perhaps one of the most popular in the United States.

Today, it is bred in Europe, the United States, and Australia, but it is native to the Indian subcontinent or Southeast Asia.

At one point in time, it was common to find many large birds of this type all over northern India, Indonesia, and the rest of the Malay Peninsula.

You can raise these chickens for eggs, but usually, they are raised for participating in poultry shows due to their unique appearance.

They produce up to 120 eggs each year, but this is only at the peak of their egg-laying performance – many younger and older hens will only have 30 to 60 eggs per year.

Nevertheless, Malay chickens are recognized by the American Poultry Association and were the first chickens to be bantam-ized.

The dwarf version was created at the beginning of the 1900s. It has an upright stance and a very muscular body and is relatively easy to find in an incubator in the United States.

However, its populations are still listed as “critically” low, and efforts are underway to encourage its breeding. 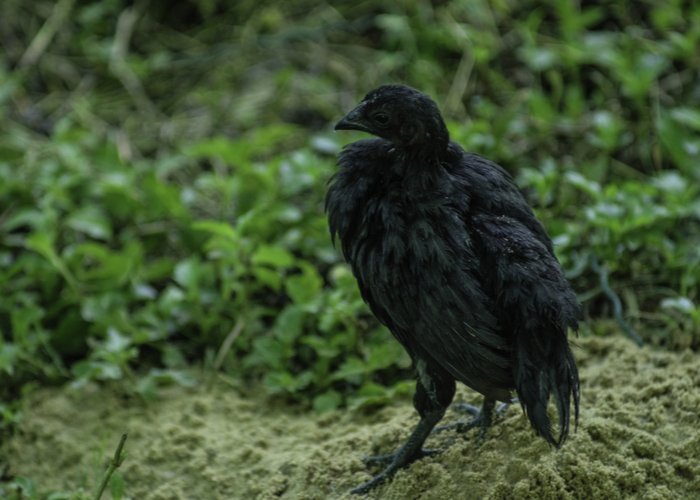 When you hunt for the right breed of poultry for your backyard, the Bali chicken breed list isn’t the only one you need to consider. There are hundreds of other kinds of chickens you can raise.

But if Bali calls to you, keep in mind that you might want to consider other kinds of Balinese poultry you can raise.

One of the most common is the Bali Duck. Originally from the island of Bali, these ducks are similar in appearance to White Indian Runner Ducks.

They are raised primarily for eggs, laying up to 200 blue or green eggs each year.

There are plenty of backyard poultry species you can raise, but there’s something extraordinary about Bali chicken breeds.

Bali is a province that contains multiple islands (including Bali itself), and it has a unique natural allure.

You’ll find that allure echoed in both its gorgeous environment and its biodiversity – but especially in its beautiful chickens! Raise a Bali chicken breed, and you won’t regret it. 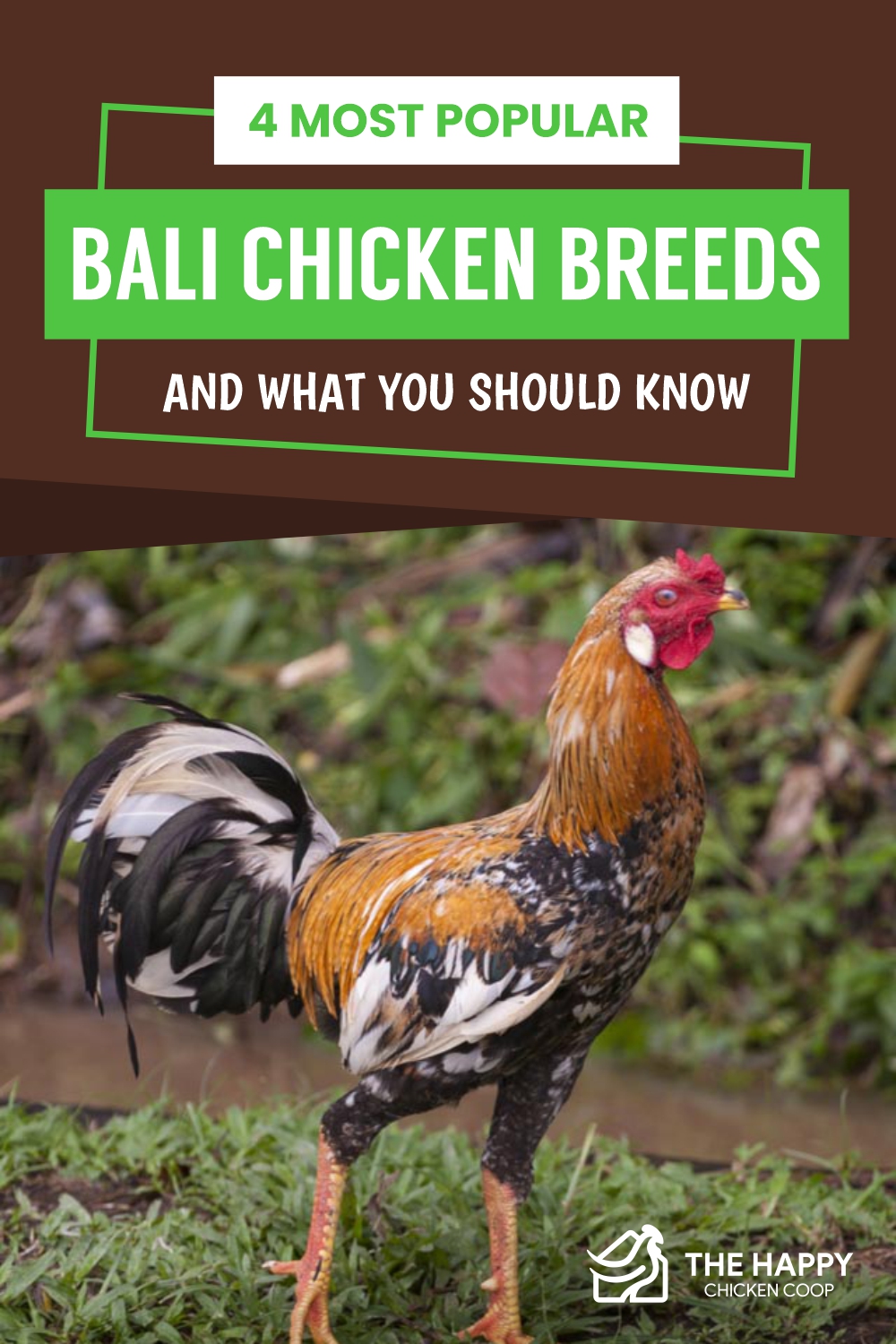