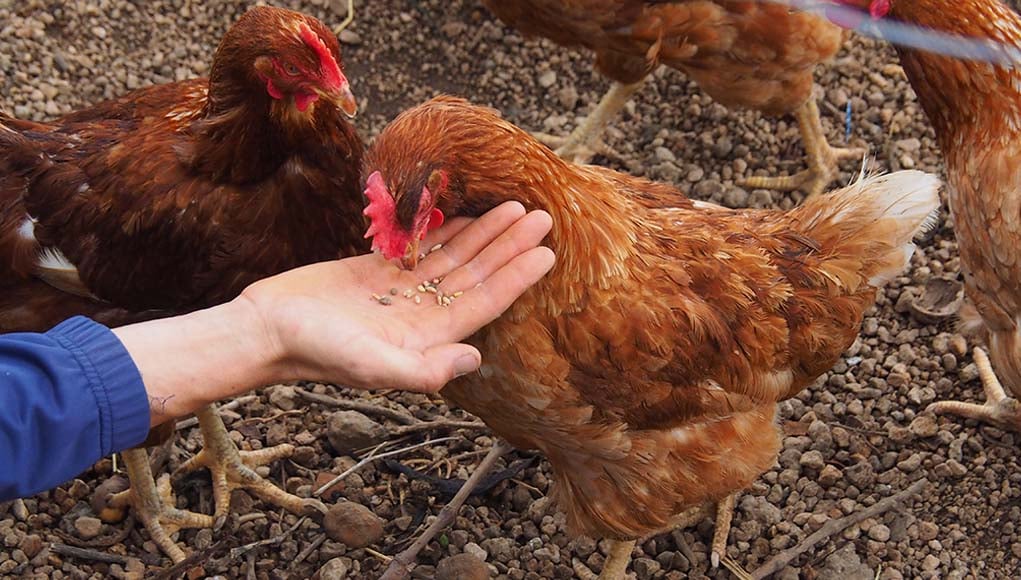 Additionally, it is just as or even more important to know HOW to feed them. Although the ingredients used in different feed types are similar, the proportions vary depending on the particular age and use category of chickens being fed. Each bag of feed is labeled with its specific use. So before selecting the top choices for chicken feed, let’s start by explaining the necessary types of food appropriate for the different ages of chickens we keep:

Day-old chicks through 18 weeks old require starter feed, aka starter crumbles, containing 20-24% protein. Starter feed contains the highest percentage of protein of any commercial feed type, appropriate for the amount of growth the average chick does in its first few weeks of life.

Starter feed for chicks can be purchased in both medicated and un-medicated varieties. Your decision concerning purchasing medicated vs. un-medicated might hinge on the vaccinations, if any, your chicks received before you bought or hatched them. 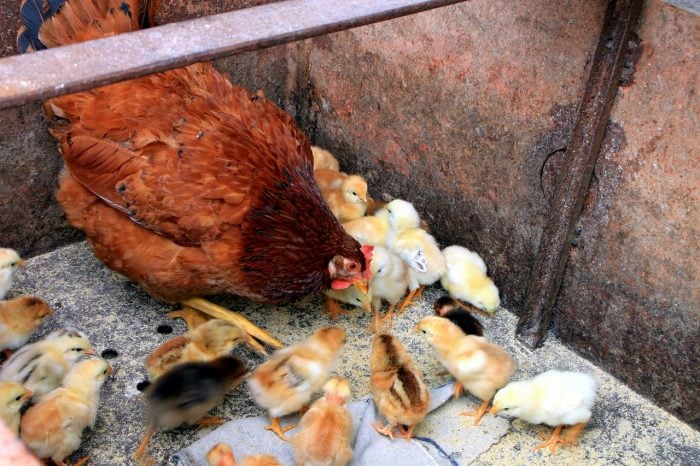 Once the chicks hit six weeks of age, feed them pullet chicken growers until about age 20 weeks. The dietary requirements for a chicken between 6 to 20 weeks old are different than both a baby chick and a laying hen.

Essentially, grower feed contains a protein content between 16-18% but has less calcium than regular layer feed.

If you feed high-calcium diets to growing chickens, kidney damage can result, so it’s best to feed these adolescents food with a good balance of high protein and an average amount of calcium.

Once your chickens start laying eggs (around 20 weeks of age), you should switch them to a layer feed. Layer feed is commonly available in mash, crumbles, and pellet forms, all of which describe the feed’s size. Mash is the smallest, and pellets, the largest. Layer feed generally contains 16-18% protein and has added calcium, necessary for strong bones and creating healthy eggshells.
While layer feed contains a decent amount of calcium, an additional calcium source such as crushed oyster shells may be made accessible to laying hens in a separate dish that is available but not a part of regular feed.

In addition to a decent standard feed, there is some general ‘add ons’ that make good sense for a backyard flock:

Chicken scratch is a common term for random mixed grains, such as corn and wheat. It serves as a cheap way to supplement your hens’ diet by providing grain and providing them with added incentive to scratch.

It’s important to realize that you should not use scratch in great amounts; too much grain supplementation can throw their diet off balance and affect egg production.

The rule of thumb is with scratch, limit it to 10 percent of your backyard chickens’ diet.

Another addition that makes for a complete feeding for some backyard chickens is grit. The term grit describes hard materials such as sand, dirt, or small stones that aid in digestion.

While starter feed and layer crumbles and pellets need no help being digested, treats, grains, and other fibrous foods require grit to help digest them. Since chickens have no teeth, fibrous foods are ground with grit in the gizzard (a muscle in the digestive tract).

Chickens foraging outside will naturally pick up bits of grit from the ground. Those that do not forage outside must have grit supplied to them in a dish apart from their feed.

The eggshell for each egg that your hen lays is about 95% calcium carbonate by dry weight. When they’re inactive lay, they use four times as much calcium as a non-laying hen.

If a laying hen does not receive enough calcium in its daily food, its body begins taking it from its bones. This can then lead to weak and brittle boned chickens.

The addition of oyster shells to a hen’s diet can protect against this. If offered as a separate entity next to their daily food, a hen will naturally consume the oyster shell in quantities her body might need to make up the difference in calcium she requires.

Important note: Only hens who are laying eggs need to be given additional calcium in their diet; too much calcium in a hen’s diet can lead to kidney damage.

Continuous access to clean, fresh water for your backyard hens is a must. When a chicken becomes dehydrated, reduced egg production is one of the first things that happens.

Another thing to mention here is that food for chickens raised for meat should have a higher protein percentage than that for layers to facilitate quick growth for earlier butchering. This food is referred to as Broiler Rations.

This is also sometimes called a “grower-finisher” feed. For heritage and pastured meat birds, protein content can be lowered to 16 percent after 12 weeks of age until butchering.

Some may choose to keep the heritage meat birds on the higher grower-finisher rations until slaughter. 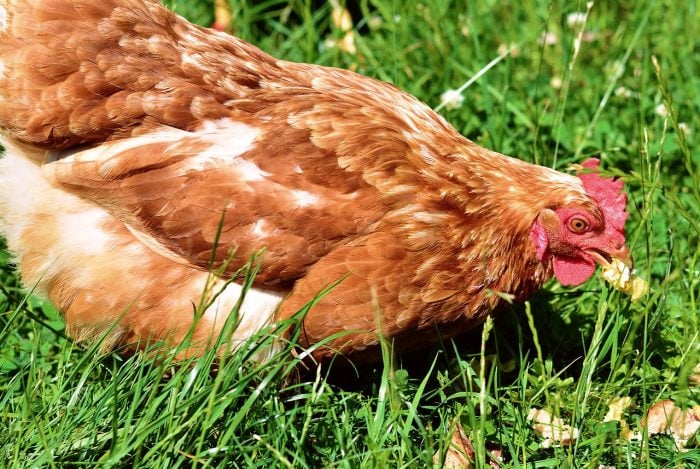 Since animal feeds, chicken food being no exception, are not getting ranked by the consumers themselves, all we humans can do is look at the nutrition information of different brands/types of feed specific to the age of our chickens, compare them to the standard for each age, and figure in the price we are willing to pay.

Our top chicken feed list, specifically tailored to the needs of our own flock, will result.

To that end, I’ve included what is largely considered to be the most helpful tool for comparison of brands and types of chicken feed, the poultrydvm.com interactive comparison chart.

It’s a straightforward, organized way to research and pinpoint the exact makeup of the food you desire to feed your flock.

Here is the web address: http://www.poultrydvm.com/feeds.php

Here is a shortlist of brands that are ranked according to nutritional information and price for those of us with little time for digging into website tools and interactive lists.

The generally recognized top five BRANDS of food on the market are most popular among consumers, keep a consistently high standard of nutrition regardless of age-range formulation, and are moderately priced. Keep in mind that certain store brands may be just as well made. For instance, Tractor Supply Company sells their own DUMOR brand.

It’s the most practical food choice for some backyard chicken farmers because it is local, covers all the nutritional bases, and cheaper than mail order. That said, here are some top brands that come most highly recommended:

Scratch and Peck Foods also ranks highly as a brand that sells food for all three ages; starter, grower, and layer. This feed has ingredients such as wheat, barley, peas, sesame meal, plus vitamins and supplements. It is corn and soy-free, non-GMO, organic, and also contains ground limestone and oyster shell. Scratch and Peck feed have also been frequently said to be a favorite consumer (of the hen variety) favorite!

Manna Pro ranks highly because it not only sells chick, grower, and layer feeds, but also a large variety of specialty foods such as “Omega Egg Maker Supplement,” 16% pellets or crumbles with probiotics, meat bird starter with 22% protein, grit with probiotics, oyster shell, vitamin supplements, and even an “All Flock” blend for different types of poultry, and a “Golden Girls” senior hen food.

Manna Pro has a specialty food for any scenario, and it is easy to find in such stores as Walmart, Tractor Supply Company, Chewy.com, and Amazon.

The following feeds do not offer all three growth stages, but the types they do supply are very well regarded.

Their ingredients include soybeans, corn, soybean meal, and a large number of vitamins and supplements.

It’s herbicide and pesticide-free, non-medicated, high in protein, and high in calcium, so supplements are not needed with this formula. It also ranks very highly because of its very competitive pricing.

Also balanced in their feeds are protein, fat, fiber, calcium, phosphorus and salt, vitamins A, D-3, E, B12, and more.

It is a great choice for separate ages of layers and growers, but definitely specialized enough, so you should limit feeding to the age of chicken it was intended for.

Another brand that offers only grower and layer feed, Kalmbach is unique in its commitment to providing nutrition that contains high calcium, amino acids, and Omega-3. It results in hens laying eggs with strong shells and a high Omega 3 fatty acid content.

For this reason, it is highly regarded for layers.

Brown’s Layer Booster is unique in that its feed uses only natural plant protein. Their grower/layer food contains no animal proteins or fats and adds vitamins and minerals in proportions designed for dense outer shells. Because of the amount of protein and calcium in this food, it is not recommended for chickens under 18 weeks.

Their feed cost is not the most competitive in the market, but if you’re looking for food free of animal protein, this is a good choice.

Kaytee Starter Diet is a completely vegetarian diet for newly hatched and growing chicks. This simple and relatively inexpensive starter crumble high in protein for growing chickens with added vitamins, minerals, and probiotics.

All in all, choosing a feed for your flock is a very personal choice, generated by parameters such as flock age, flock type, price, and preference regarding the status of GMO, organic, and vegetarian type feeds. This guide is meant to be a tool in starting the search for a diet to suit your own flock’s best nutritional needs. Trial and error might be necessary to find the exact fit for you.