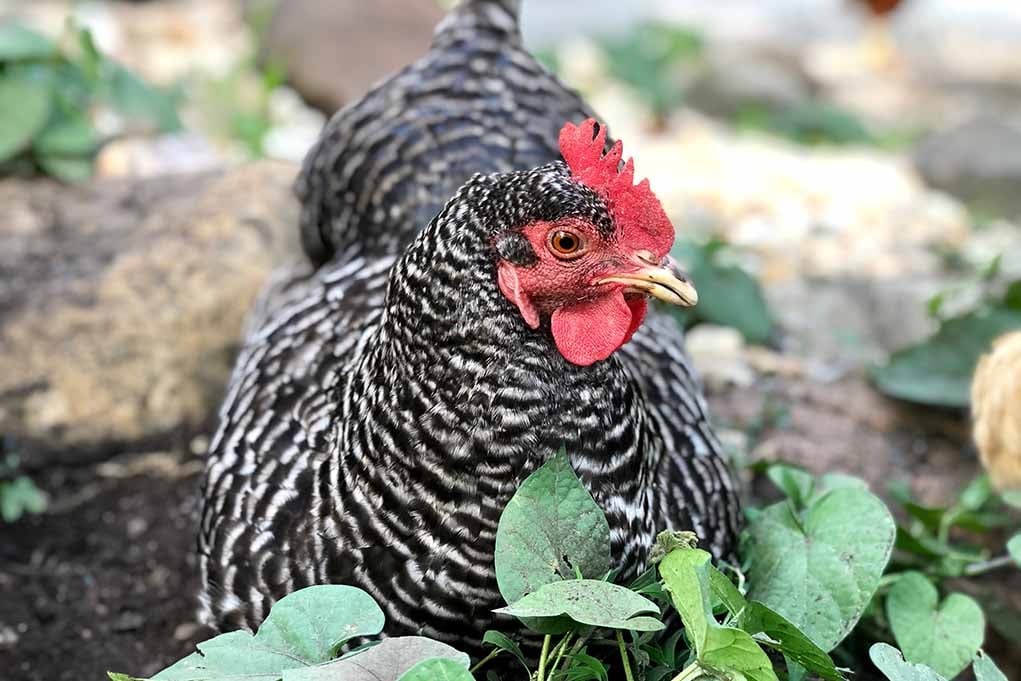 The Barred Rock chicken is a hard-working member of the backyard chicken flock. She is a beautiful, calm, and productive member of any flock.

One of Americas’ first and finest poultry creations, she has been a worldwide success for thousands of poultry breeders, enthusiasts, and backyard ‘keepers for well over 100 years.

Read on to learn more about this underrated and often overlooked hen to see if she fits well with you and your flock. 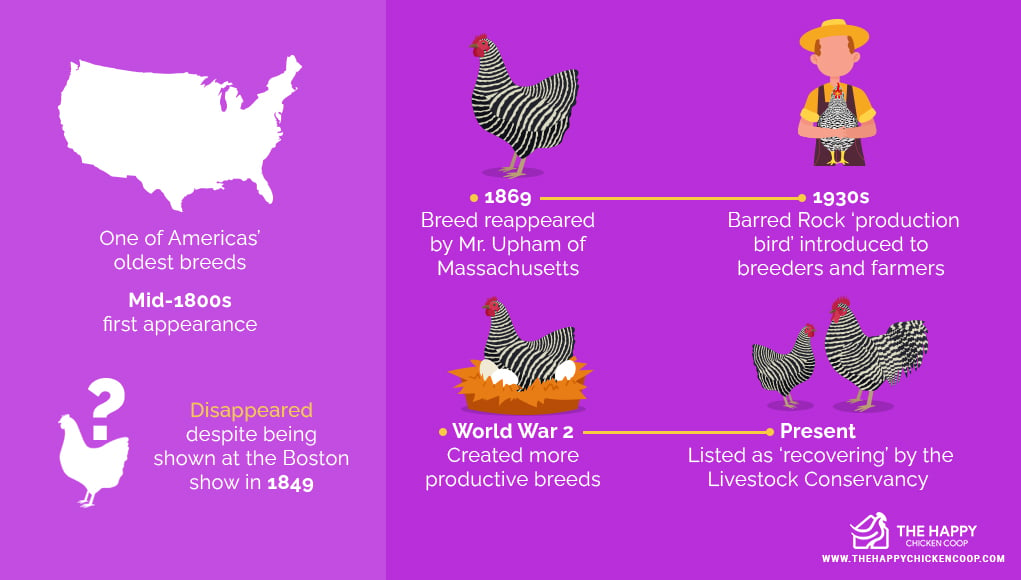 This is one of Americas’ oldest breeds, first putting in an appearance in the mid-1800s’.

The first barred specimens seemed to disappear from the landscape despite being shown at the Boston, Massachusetts show in 1849.

The breed reappeared in 1869 when a Mr. Upham of Massachusetts bred barred roosters to Java hens to create the prototype of the Barred Rock, although others lay claim to the breed.

At this particular time, the Dominique hen (also barred) was a top-rated and winning poultry show. 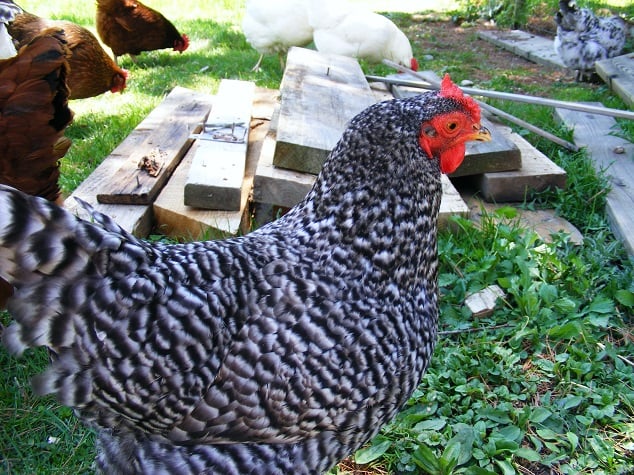 At this time, the standard for Dominiques and, eventually, Barred Rocks was a bit lax.

Breeders could exhibit Dominiques or Barred Rocks in both breed categories and win both categories because the comb could be either rose or single.

This seemed unfair to many breeders, and eventually, the New York Poultry Society set the standard as a rose comb for Dominiques and single for Barred Rocks.

Needless to say, this upset a few people and confused the owners of either bird.
Eventually, things settled down, and the two breeds became separate entities in competition.

The Barred (Plymouth) Rock hen became the basis of the broiler industry until World War 2, when Breeders had produced more productive breeds of hen.

They were almost single-handedly responsible for keeping meat, protein, and eggs in the American diet through the time of rationing.

They remained popular as backyard hens because of their hardiness, docility, and productive traits.

In the 1930s’ the Barred Rock ‘production bird’ was introduced to breeders and farmers alike.

The production breed excelled in the eggs and meat areas and nearly drove the purebred heritage hen to extinction.

Fortunately, the heritage bird has enjoyed a resurgence of popularity and now is listed as ‘recovering’ by the Livestock Conservancy. 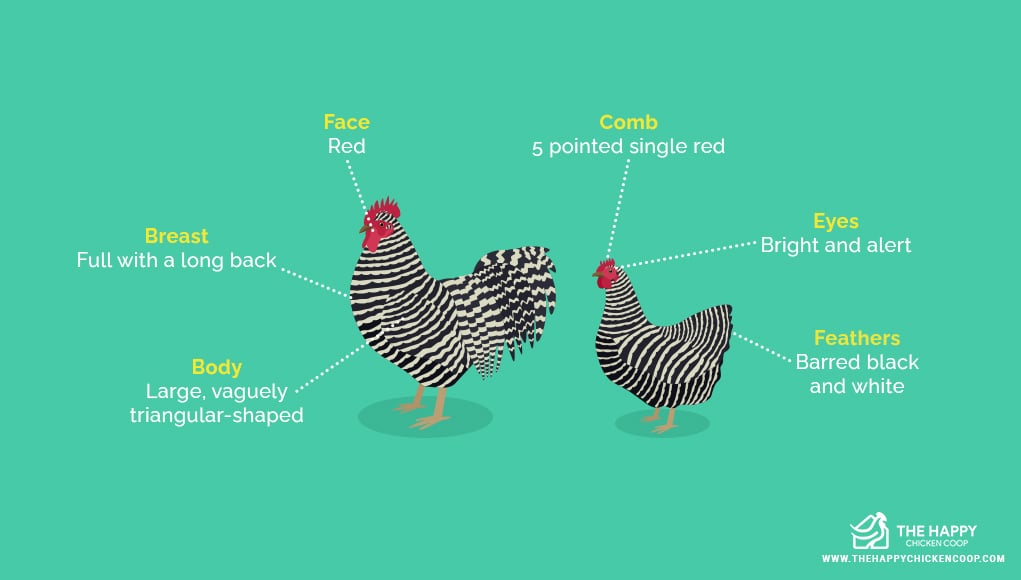 The first of the varieties appeared in 1884 when Mr. Frost exhibited his white-barred ‘sports.’ The Plymouth Rock Club was formed in 1897 to promote the breed.

In 1890 R.C. Buffington exhibited Buffs for the first time.

The Partridge variety made its’ appearance in the Madison Square Garden show in 1910 and was accepted to the APA in 1914.

Shortly thereafter, the Columbian rock appeared in exhibitions and was accepted by the APA in 1920.

In 1922 the silver penciled emerged and was duly accepted into the APA.

The blue variety was the last to be accepted by the APA.

The overall appearance of the Barred Rock hen is a large, vaguely triangular-shaped body with sharply defined barred black and white feathers.

It should be a hearty-looking bird with a 5 pointed single red comb and face. Eyes should be bright and alert.

Full breasted with a long back. The bird gives a lot of meat to those interested in raising them for table fare.

Once the birds get to know you, they will be friendly creatures, often tapping you for treats or affection!

They are great with children as many of them enjoy being picked up and cuddled – lap chickens in the making! 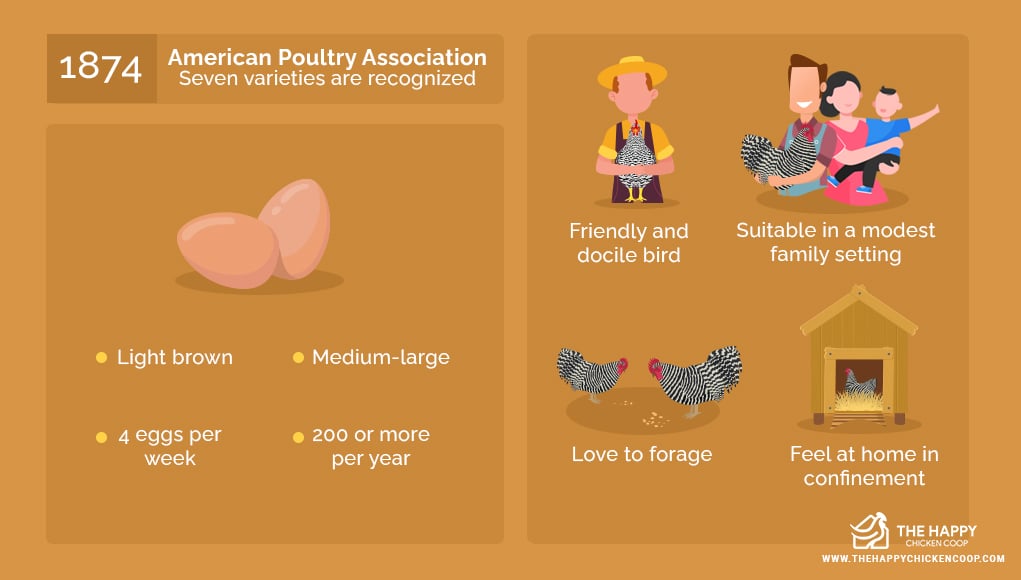 APS accepted the Barred Rock to the American Poultry Association standard in 1874. In the US, seven varieties are recognized.

Only five are recognized by the Poultry Club of Great Britain in Britain, but the Entente Europeenne d’Aviculture et du Cuniculture recognize ten varieties.

The Barred Rock is a friendly, sweet, and docile bird, partly why it has been a favorite hen for so many years; they are not known to be mean or bad-tempered.

It suits backyard life well and is easily integrated into a modest family setting.

They are inquisitive and love to forage their food, a skill that they are very adept at.

They have a very unfussy demeanor and will be at home in confinement if they have sufficient space.

The Barred Rock is a layer of an ample amount of light brown medium-large eggs. She will lay in the region of 4 eggs per week or 200+ per year. 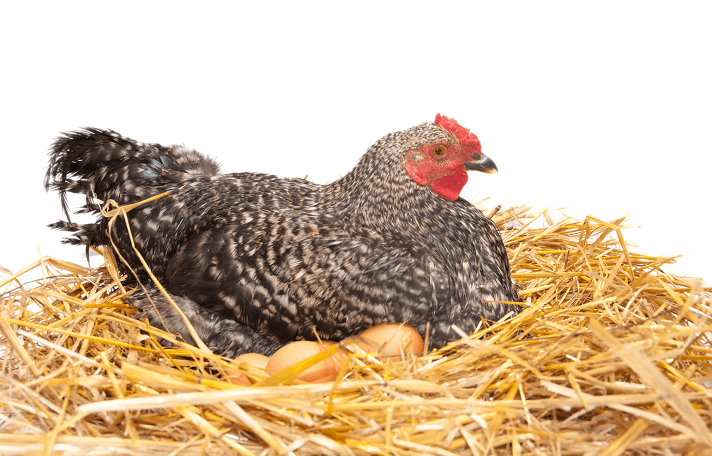 The production strains will lay well for the first couple of years then the output will start to decline.

With the heritage strain, laying will go into the third or even fourth year but be less overall per year.

Although not overly broody, you can persuade them to brood if you keep a few eggs in a nest with the hope of encouraging them.

They make good broodies’ once they get the hang of it and are good mothers too, by all accounts.

Chicks feather in pretty quickly, too, so they are ready to go outside quite early.

They weigh well over the first few weeks/months and be considered broilers by 8-12 weeks.

This is a healthy, strong bird with a great genetic background, so she has no real health problems to speak of.

The combs of the roosters may need some care during severely cold weather, and of course, internal and external parasites need to be monitored.

Otherwise, she is a fairly maintenance-free bird.

Is The Barred Rock Breed Right For Me? 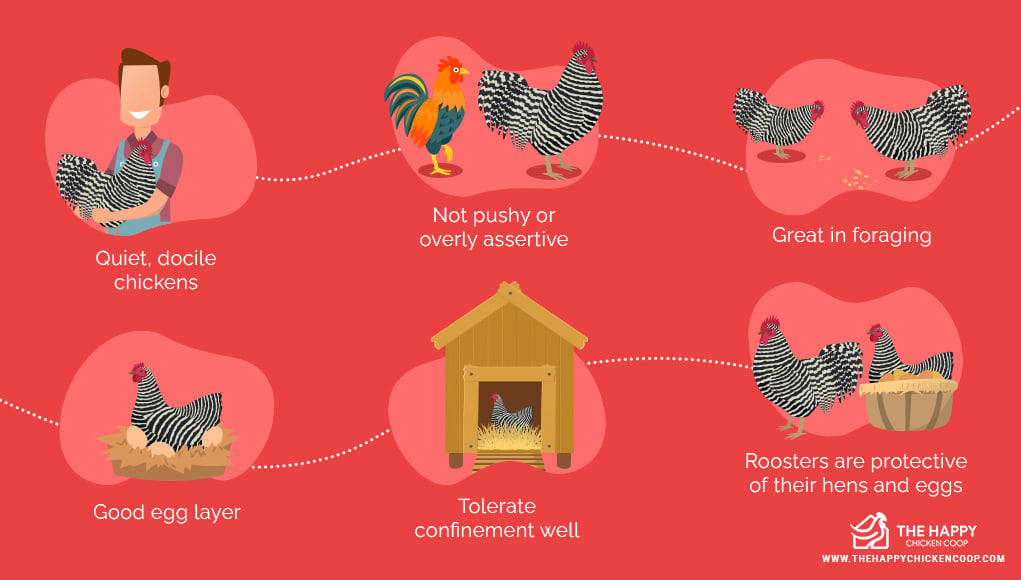 If you have a small backyard enterprise and want a quiet, docile, friendly egg layer, the Barred Rock may be your bird.

They are not very noisy (except for the egg song) and would make a good addition to an urban flock.

They adequately provide the egg department for a mid-sized family, and hens will reach around 7.5lb. And make a well-proportioned table bird. Roosters will be about 1lb. Heavier than the hens.

They are not pushy or overly assertive. Barred Rock’s would rather walk away from a confrontation, although they will stand their ground if pushed.

They pair well with other breeds such as Dominiques, Barnevelders, and Faverolles.

They tolerate confinement well but shine in the foraging department if allowed to free-range. Their distinctive barring gives them some camouflage against aerial predators.

The roosters can protect their girls, so be cautious with small children, especially during the breeding season.

However, the roosters have also been known to sit on the eggs to give Mama a break and are generally more laid back than most other roosters.

Those folks who have kids interested in a 4H or farming projects could do much worse than using bantam Barred Rocks for the kids.

They make for a valuable, non-threatening, and relatively cheap endeavor into the world of self-sufficiency or farming.

The Barred Rock is a hen suitable for many locations from larger farm operations to small backyards – wherever you need a quiet, dependable egg layer!

The quietness of the bird bodes well for an urban setting where neighbors are always a consideration.

The plumage gives reasonable cover from predation if they are allowed to free-range, and a rooster can be kept as an ‘early warning system’ to alert you to danger.

Of course, livestock guardians, whether canine or otherwise, can certainly help in this respect.

The Barred Rocks I have kept have always been quiet birds who have gone about their business with fanfare but enjoy human interaction – especially the occasional treats!

A few Barred Rocks hens will keep a small family in eggs with some to spare each week, so they more than pay for their keep-in product and entertainment.

All in all, the Barred Rock is well suited for life as a backyard hen with low maintenance needs and high productivity – what more could you ask? 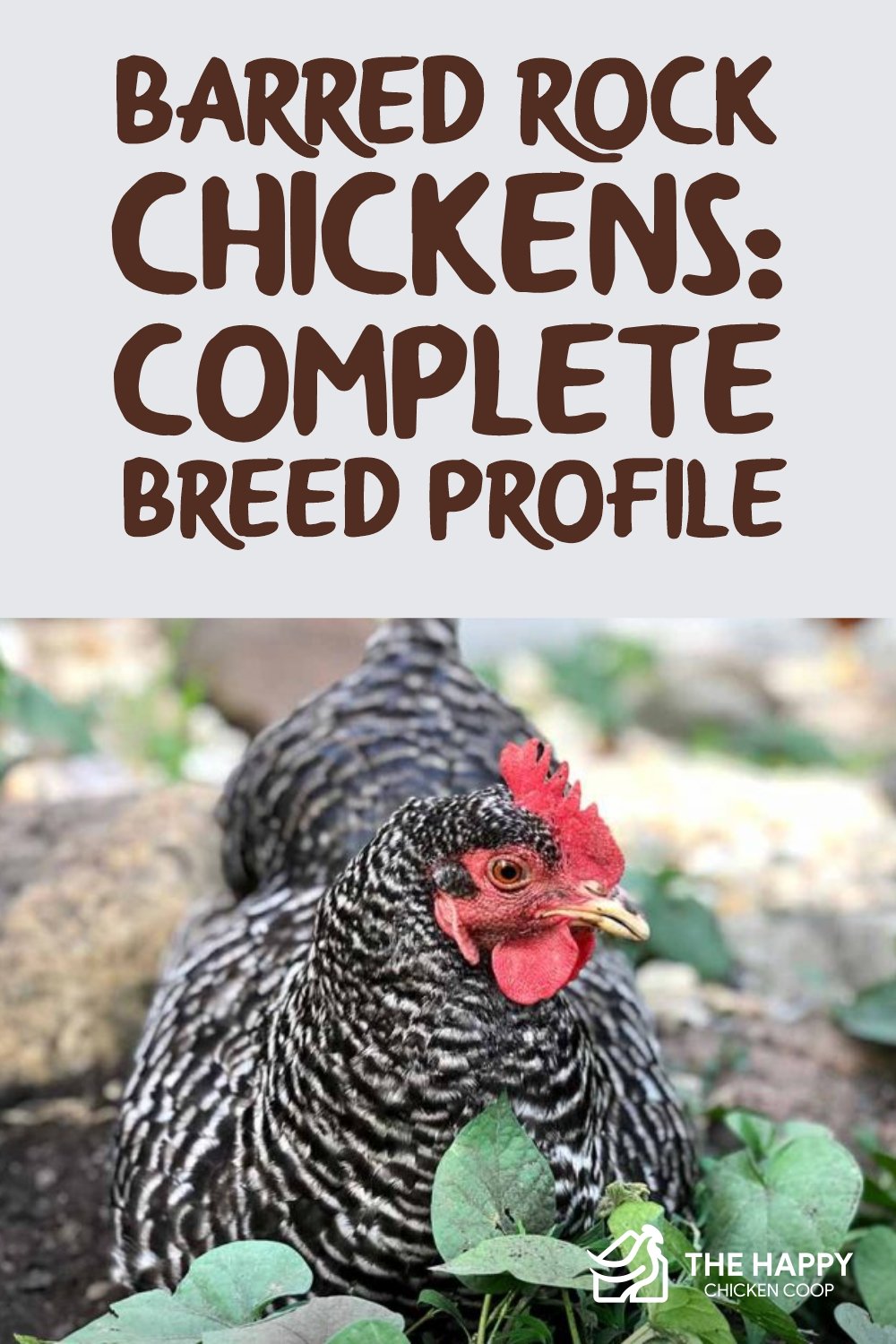