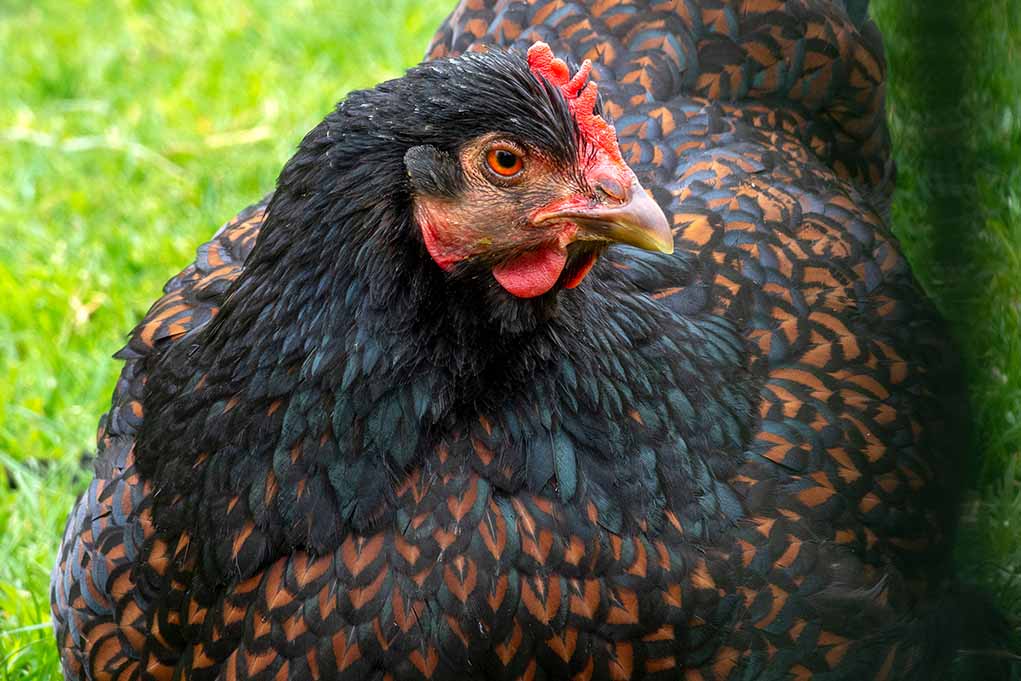 Barnevelder Chicken, or ‘Barnies’ as they are affectionately known, are relative newcomers to the world of chickens.

That hasn’t held them back though, they have a firm following, and rightly so. They are low-maintenance hen with a fun personality and good looks!

Once the darling of the Dutch egg industry, the Barnevelder now finds favor with many small flock keepers as a dual purpose hen.

In this article, we will discuss the different varieties of Barnevelders, their temperament, and of course, their beautiful chocolate-colored eggs. 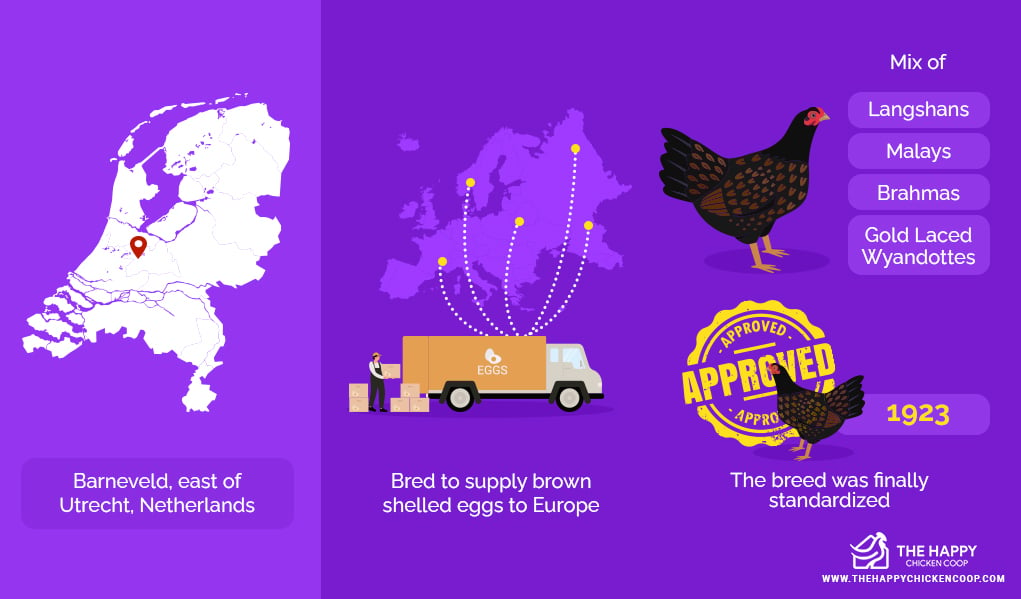 Background and History of the Barnevelder

Despite being a relatively recent addition to the chicken family, the exact genetic make-up of this lovely bird is a bit murky.

Barneveld, east of Utrecht, is home to a large agricultural college specializing in poultry. As such, the area became the hub of the poultry industry in the early twentieth century.

The area was known for supplying eggs to Europe, and the egg supply market was huge. England wanted brown shelled eggs at that time, so it became necessary to make a bird that laid dark brown eggs so the farmers could keep up with demand.

The original birds of the area were likely ‘landrace’ and other older local breeds that had lived in the area for a long time. With the arrival of Oriental birds, the local poultry folk started cross-breeding their hens with different imported fowl.

Langshans were certainly used in the mix, Malays and Brahmas’ too. In 1898 Gold Laced Wyandottes were added to the mix, but there was still a lot of variety in various Barnevelder lines.

A note here to say that different people have some different ideas of the genetic mixture – there is no true consensus of the lineage.

As a result, efforts were made to bring conformity, and the Barneveld Breeders Association was formed. This did much to help with the problem, and in 1923 the breed was finally standardized. 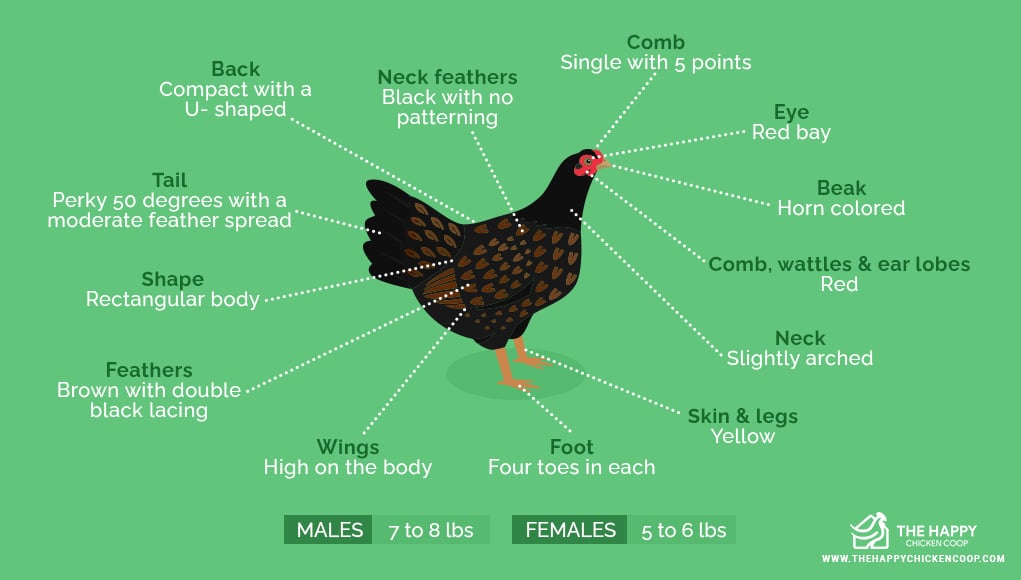 Barnevelder hens express a beautiful patterning on their feathers, a brown feather with double black lacing to produce an ‘arrowhead’ effect.

It is a simple but stunning design, I think. The neck feathers are black with no patterning.

The genetics to get this effect are quite complex, and the rooster does not have this pattern.

The male is a melanistic black-breasted red color, and despite many people trying for double lacing on the roosters’ chest, it has never happened.

The Barnevelder can be described as a rectangular body shape, compact with a U- shaped back. Their wings are high on the body, so the bird does not fly well.

Their neck is slightly arched, the tail carried at a perky 50 degrees with a moderate feather spread. The plumage is described as ‘tight.’

As for their comb is a single variety with 5 points; comb, wattles, and ear lobes are red. The eye is a red bay in color, and the beak is horn colored.

Skin and legs are yellow with four toes to each foot.

The Barnevelder is a large bird, hens weigh around 5-6lb, and roosters weigh in around 7-8lb. 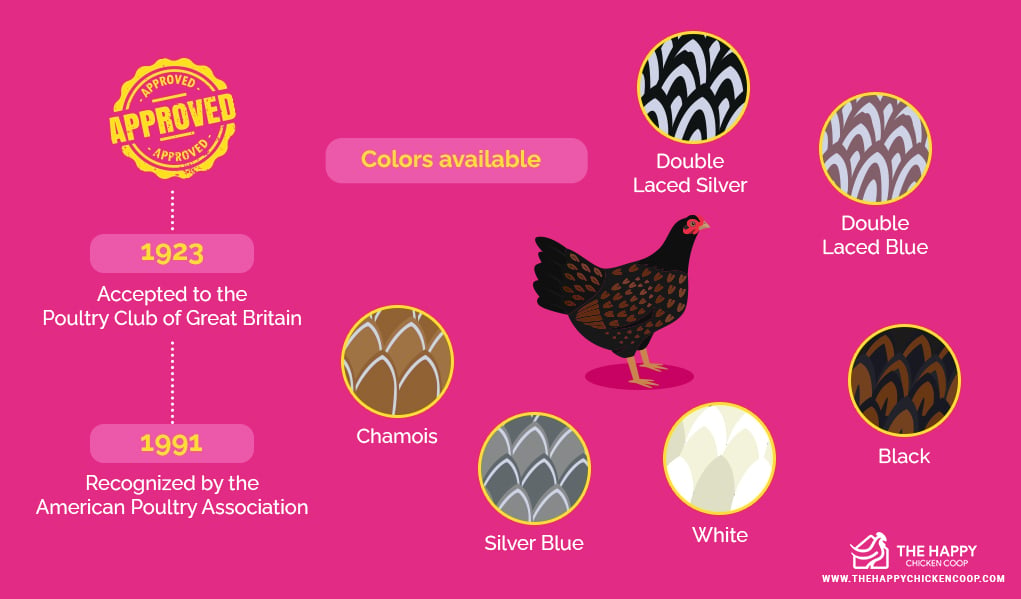 It took a long time to standardize this breed; they finally accepted it to the Poultry Club of Great Britain in 1923. It is classified as a soft feathered, heavy breed.

The American Poultry Association recognized the double laced Barnevelder in 1991. They classify it as ‘continental.’

The only variety standardized in Holland is the double laced.

The original colors were partridge and double laced. Sadly, it is believed that the partridge variety may now be extinct.

Barnevelders are also available as bantams, but they are not easily obtainable from breeders. The bantams are not recognized in the standard. You should note that the APA does not recognize the above colors, and also, many of the newer colors have ‘bleeding’ problems which can ruin the look of the bird.

Egg Laying and Temperament of the Barnevelder 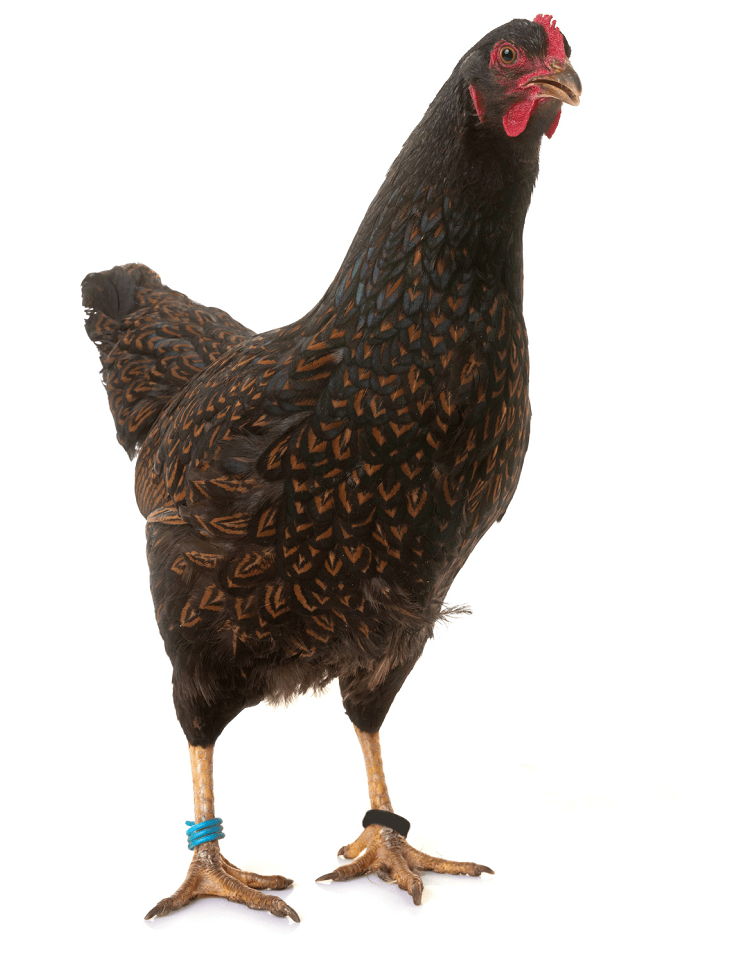 The Barnevelder will give you 3-4 large brown eggs each week. The eggs are said to be dark chocolate and occasionally speckled.

I have never seen ‘chocolate’ colored eggs from mine, but the eggs are a dark brown with occasional speckles.

They will lay through the winter, so this makes them quite popular with some folks.

The hens are not known for being particularly broody.

Over the years of development, the color quality of the egg has suffered.

Time and effort have been put into the plumage, but the egg coloring has diminished from a chocolate color to the more common dark or even light brown seen today.

As with other breeds, those made to produce more eggs will have lighter colored eggs; Marans, for example.

Barneys is a very easygoing bird, and they rarely squabble with anyone; even the roosters are known to be calm.

The Barnevelder is an amiable bird. They are always pleased to see you and will greet you with low-key chattiness.

They talk quite a bit, but their voice is low and quiet, unlike Rhode Island Reds, who like to shout!

Barnevelders are active birds. They love to free-range and excel at it. You can easily tame them to be pets if you start at an early age, and since they are docile, gentle, and definitely kid-friendly.

In general, Barnevelders are robust birds with minimal health issues. They tolerate a wide variety of climates and take it all in their stride.

They don’t enjoy hot and humid so much, but they will do quite well if they have shade and water available.

Allegedly they are highly prone to Marek’s Disease and should therefore be vaccinated at birth.

Other than the usual suspects (lice, mites, etc.), the Barnevelder is pretty much problem-free health-wise.

Is the Barnevelder Chicken Right for You?

The Barnevelder is a delightfully gentle and inquisitive bird, eminently suitable for a family flock.

They will tolerate confinement well but really enjoy free-ranging for goodies. They are very friendly and love to help you with garden tasks such as weeding!

Mine is always the first flock to run and greet me when I appear in the yard.

They are great with kids, and if you start them very young, you can make ‘pets’ out of them; the chickens, not the kids!

It would be hard to find a more even-tempered bird; I have never seen mine be objectionable to another hen. They are full of life and rarely have a down day. Their attitude is infectious, and you will find them lifting your spirits with their happiness.

As show birds, they do well since their demeanor is unflappable, and they are tolerant of a wide variety of conditions.

They also do well as 4H or farm project birds for the younger farmers.

Barneys are delightful birds – they always greet you and make you feel loved. They are a great addition to any flock, although more assertive breeds can pick on them.

They are a good dual-purpose hen, non-aggressive, and they usually get along with everyone.

Some sources list them as ‘rare,’ however. I would disagree and say that the double-laced birds are uncommon but not rare.

In fact, the double-laced Barnevelder is enjoying a resurgence of popularity currently!

Do you keep Barnevelders? Let us know your experience with them in the comments section below… 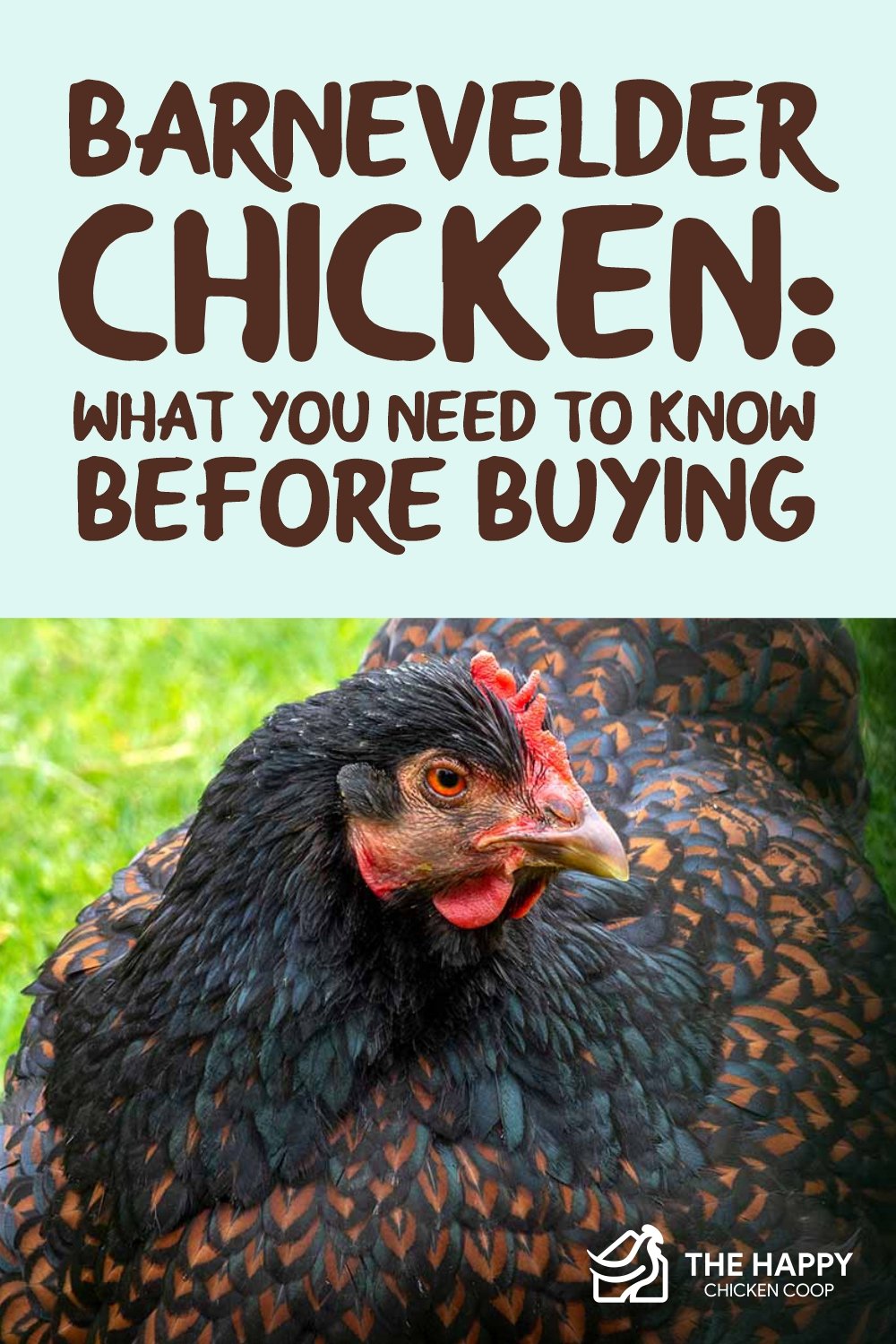 32 thoughts on “Barnevelder Chicken: What You Need To Know Before Buying”