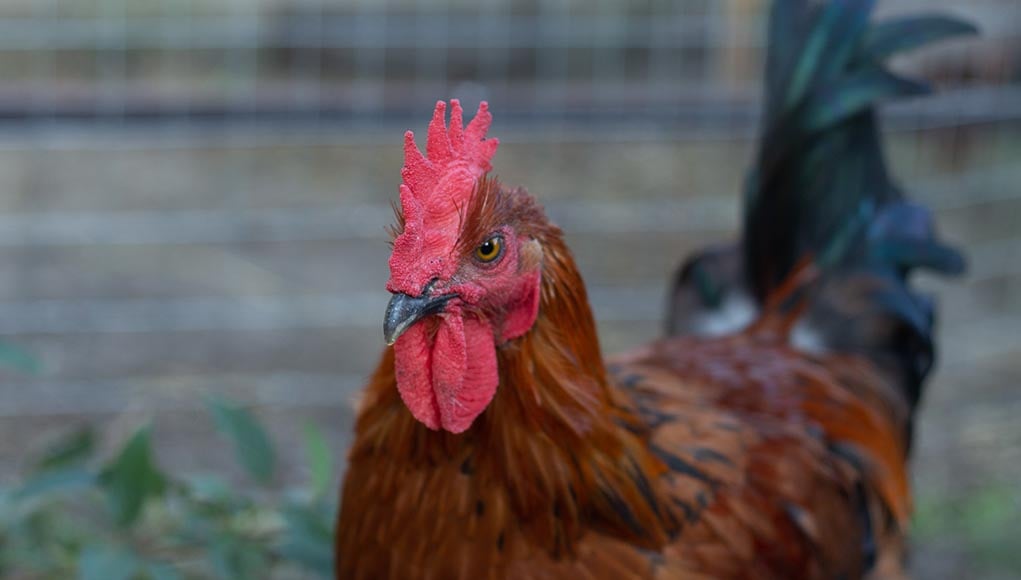 A hen that seems to be all the rage at the moment is the Black Copper Marans chicken. It’s a beautiful bird that lays extraordinary, dark, chocolate-colored eggs.

Although it has not been around that long (1900 or so), it has a fraught history with ups and downs and near extinction.

The Marans breed has several varieties, but the one that has recently captured the most attention here in the US is the Black Copper Marans.

The Marans breed has appealed to the English because it was supposed to be James Bonds’ favorite egg!

In this complete breed guide, we will discuss the history of Black Copper Marans before looking at their behavior and egg-laying ability. 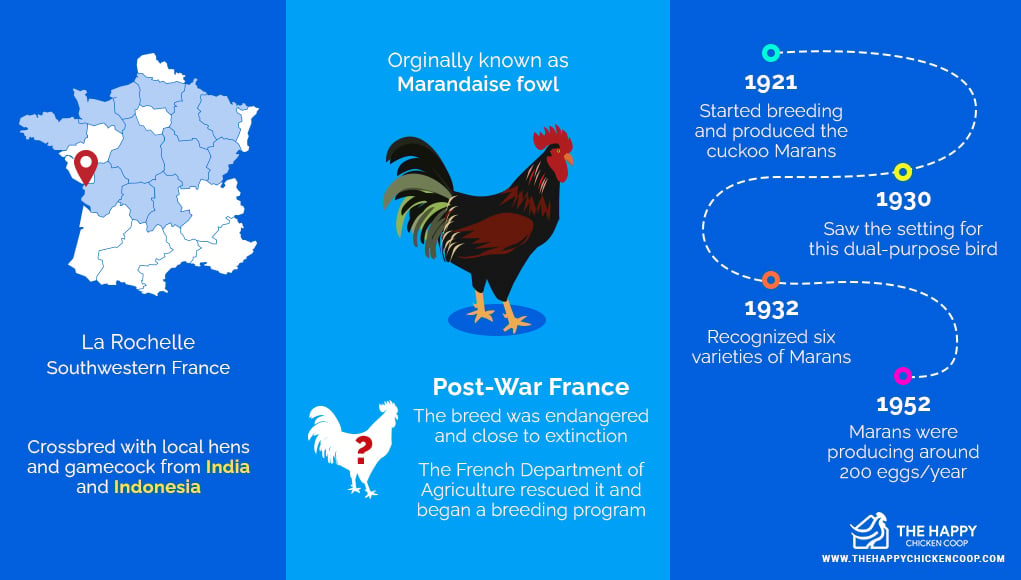 The original Marans (poule de Marans) comes from La Rochelle’s area in southwestern France. The local chickens were known as ‘swamp chickens’ because the countryside is low and marshy.

These original landrace birds were crossed with the local barnyard hens and gamecocks from India and Indonesia that the sailors brought in. The gamecocks were traded by them for fresh food and water and so were often plentiful in supply.

In later years the Marans were further refined by Croad Langshan, Brahmas, Coucou de Malines, Coucou de Rennes, and Gatinaise chickens to produce the ancestors of the Maran breed we know today.

The Marans became well known locally in France for the deep red color of their eggs; the plumage, however, was all over the place.

Skipping forward to post-war France, the breed was in shambles and was near to non-existent.

The French Department of Agriculture rescued it from obscurity and began a breeding program.

One of the goals of the program was to increase egg production, which it did. By 1952 Marans were producing around 200 eggs/year.

When the program ceased, numerous amateur enthusiasts took up the Marans’ cause, who did a great job keeping and improving the breed. 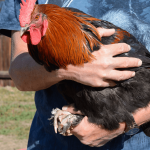 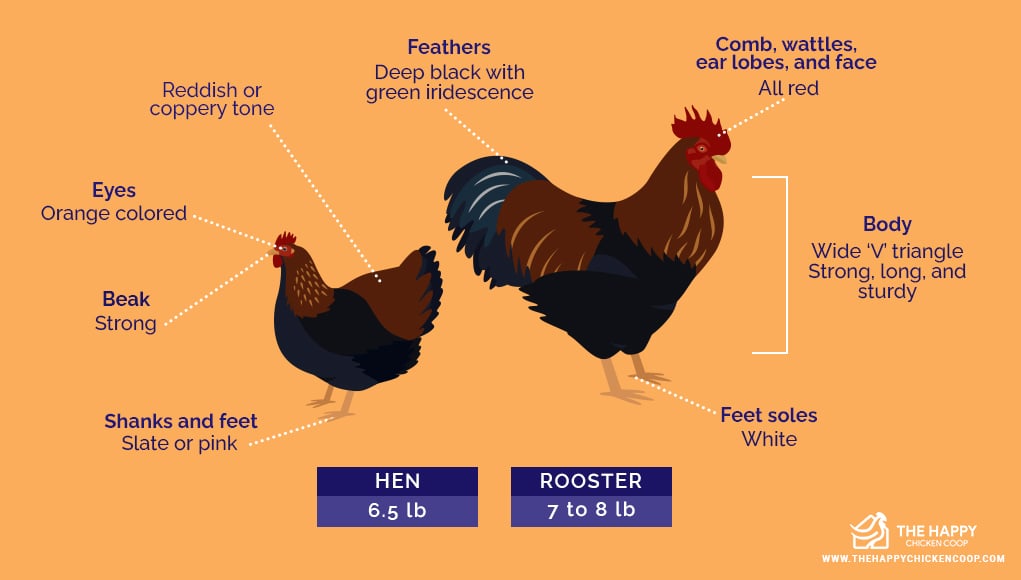 The body of the Black Copper Marans seen from the side forms a wide ‘V’ triangle. The body is strong, long, and sturdy. They should be wide through the shoulders.

The hackle feathers are a reddish/coppery tone. The rooster also has copper saddle feathers that cascade over his back. Whilst the hen is not quite so splendidly adorned, it’s still a beautiful bird.

The males weigh around 7-8lb, with the hen around 6.5lb. There are bantam Marans, but they are scarce and hard to find.

The Black Copper Marans was recognized by the American Poultry Association in 2011 – a recent arrival! Whilst, the clean-legged Marans were accepted to the Poultry Club of Great Britain in 1935.

In its home country of France, there are nine recognized varieties of Marans.

The standards for the Marans varieties can vary greatly from country to country. It is classified as a ‘Continental’ breed, and the type is large fowl.

In the UK, clean-legged birds are the standard. In France and the US, both clean-legged and sparsely feathered legs are recognized.

The single comb, wattles, ear lobes, and face are all red. The beak is strong with a slight hook to it, and it should be horn-colored. Eyes are orange colored. Shanks and feet should be slate or pink; soles of the feet are white, as is the bird’s skin.

The male should be black-breasted red with minimal spotting on his chest. There should be a definite black triangle on the wings, and he should have deep red shoulders. The copper-colored feathers in the neck, hackles, and back are described as ‘lancets.’ The hen is black with red hackle markings; very slight redbreast markings are acceptable.

Common faults found in this bird are yellow shanks, white ear lobes, black eyes, ‘off’ coloring, and ‘over’ feathering of the legs. 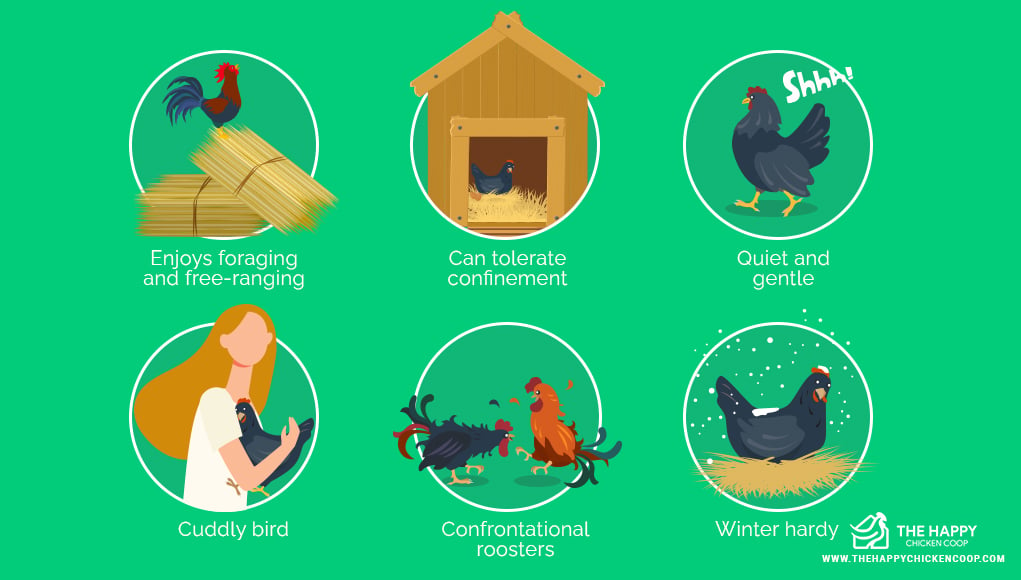 The Black Copper Marans are quiet and gentle, although the roosters can confront other roosters. This fits with the history of gamecock breeding and is expected to a certain degree, although there are fairly docile roosters to be had.

The hens are generally docile, but this can vary from bird to bird. They aren’t known for being a ‘cuddly’ bird.

Black Copper Marans are an active bird that enjoys foraging and free-ranging but will tolerate confinement fairly well. They also quite winter hardy, so suitable for the Northern climates given adequate housing and shelter.

Black Copper Marans are renowned for their very dark brown/chocolate eggs. All Maran’s birds lay a dark brown egg, but the Black Copper is sought after, its’ egg color being especially ‘chocolate.’

The fewer eggs a Black Copper hen lays, the darker the color. If your hen is a good layer, you will not get the darkest color on the eggs.

The pigment overlay of the egg is a finite source, so once the ‘ink’ starts to get low, the color gets lighter. We talk about egg color more here.

Egg color can also be cyclical – at the beginning of the laying season, you will get very dark eggs, but the color will have lightened considerably by the end.

This means that the Maran is an average layer in quantity, but the egg’s quality is said to be unsurpassed.

If you are interested in buying Black Copper Marans, here is a good buyer’s tip for you:

Beware of buying hens based on the color of the egg in a photo. Eggs that are exposed to the air for a period of time tend to be darker.

The red pigment oxidizes in the air and turns the pigment darker.

This trick has been used numerous times by unscrupulous folks who want to sell you an ‘average’ bird.

Rely on the reputation of the breeder and any feedback you may find.

If you are looking for an egg-laying superstar – the Black Copper Marans will disappoint you.

But if you are looking for a beautifully marked hen that lays very dark eggs, the Black Copper Marans is for you!

Please remember, though, the hens that lay the darkest eggs also lay the fewest. The quicker the egg passes through the system, the lighter the shell color.

The Marans society has come up with a color scale for the eggs labeled 1-9, with 9 being the darkest and supposedly the best – do they taste different?

I really don’t know. The hen that lays less than a ‘4’ egg is not considered to be a Marans.

Price of The Black Copper Marans

Yes, you can get hatchery birds for under $10.00 each, but they pale compared to the more expensive and better quality birds.

If you think that the price is a ‘rip-off,’ look at some photos of the difference between hatchery and breeder stock.

Sometimes, it is difficult to tell the difference with some breeds, but not so this one. The plumage should be splendidly colored, not washed out or muted.

The birds should stand tall and proud and be muscular through the shoulders – the roosters seem to wear their colors very regally.

If kept in colder climates, special consideration must be given to their large combs. This type of comb stands tall and far off the head of the rooster.

This makes the Maran more susceptible to frostbite. Severe Frostbite can actually cause the comb to die off.

If you are interested in experiencing this rare breed, hatchery chicks may be your best bet if you are on a budget.

But if your goal is to win first place at the expo, then you may want to consider investing in a Maran from a reputable breeder.

Breeders are pleased to talk about their favorite birds, so spending some time with an enthusiast will only help you learn more about your new feathered friend.

These birds are expensive for a good reason. The time and effort it takes to produce such a gorgeous bird that can breed true down the line are enormous.

If you are serious about getting some of these rare beauties, it makes sense to buy the best you can; that way, you can work to produce good quality chicks of your own.

Read Next: The A-Z of Chicken Breeds and Choosing the Perfect One 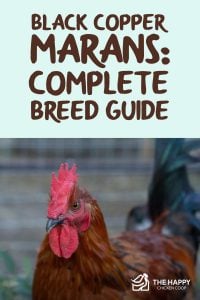