Sebastopol Goose: All You Need to Know 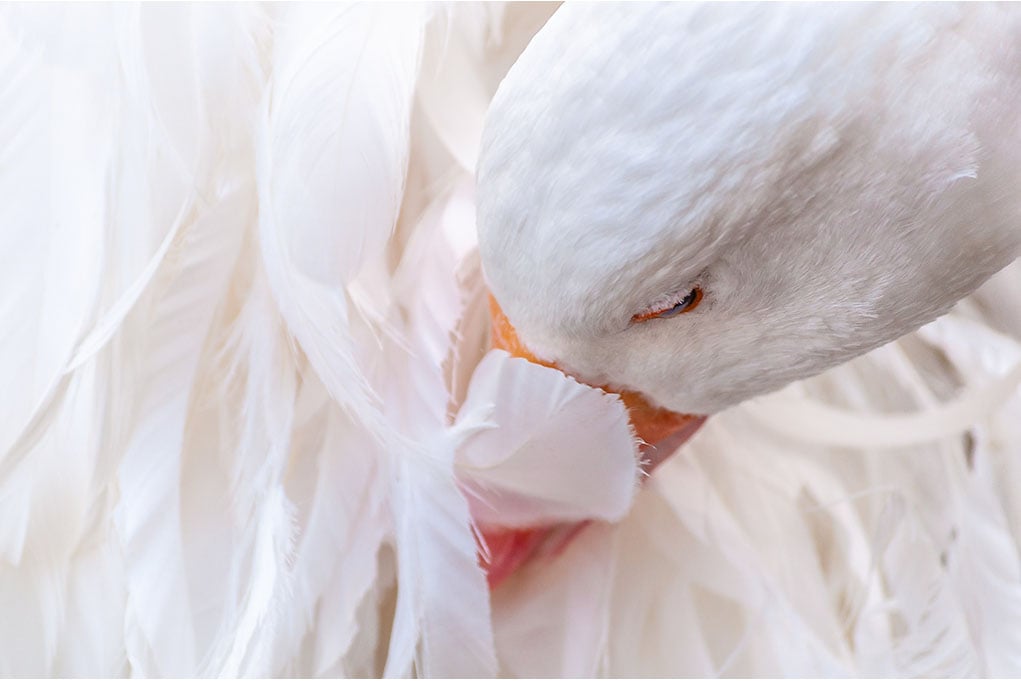 Curious about whether the Sebastopol goose might be the right animal for your farm or home? In this guide, we’ll give you the information you need to make a decision.

The Sebastopol goose is a type of domesticated goose and is one of the most popular breeds in this category.

They are known for their long, slender necks and webbed feet, which make them excellent swimmers.

This animal is a breed of domesticated geese that originated in the city of Sebastopol. Their long necks and slender bodies characterize them.

The geese can be used for eggs, meat, or to keep the grass short on golf courses and other areas where they are raised.

Want to learn more about this unique species? Keep reading to find out whether the Sebastopol goose is right for you. 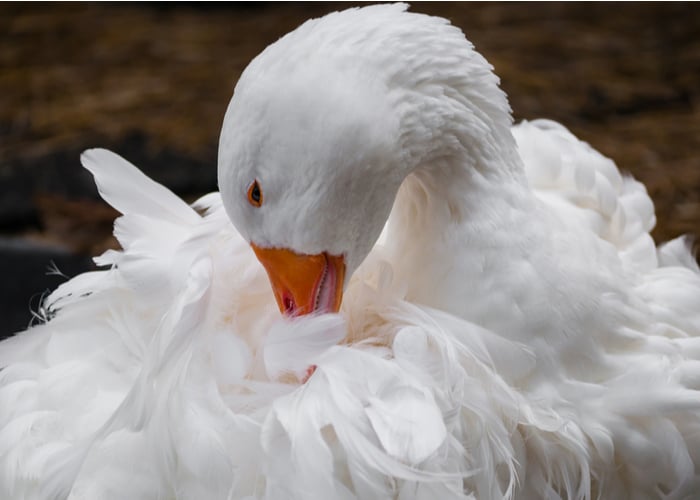 History of The Sebastopol Goose

The Sebastopol goose is a domestic goose breed that is a descendant of the European Greylag goose.

The exact history behind this bird’s origins is a bit murky. However, it is believed that the breed was developed somewhere in Central Europe along the Danube and the Black Sea.

Other records suggest they originated in the Crimea and were sent out from the port Sevastopol before arriving in England.

In any event, Sebastopol was first shown as a recognized, distinct breed in England in 1860.

It was shown under the name it has today – Sebastopol goose – and prized for its white, curly feathers, medium weight, and vibrant blue eyes.

They found it just about everywhere by the end of the 19th century.

In addition to being raised for exhibition, Sebastopol geese were originally bred for their curly feathers, where people used them in quilting and pillow making.

In the past, these animals were referred to as Danubian geese, but they eventually dropped this name due to some confusion over an Irish goose breed of the same name.

They have a ton of other nicknames, too – for example, in Germany, Sebastopol geese are referred to as Strupp Guns or Lockengans, which means “unkempt goose” or “curl goose,” both names about the frizzled, frazzled appearance of this bird’s feathers.

Sebastopol geese rose to popularity quickly, not just because of their appearance but for many other qualities.

They are good-natured, excellent foragers, and fatten up easily.

When it comes to raising Sebastopol geese for more utilitarian purposes, there is plenty of benefits, too. These animals are great sitters and moderate layers.

They are good natural mothers, too. They’ve never been used for large-scale meat or egg production and are more commonly raised for ornamental purposes. 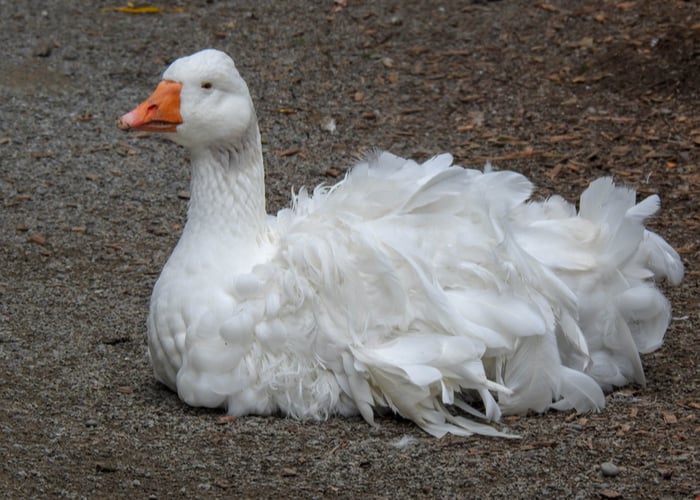 More often than not, the Sebastopol goose can be identified by its feathers, which curl under.  These are mostly flightless birds.

Weighing around 10 to 12 pounds, these geese aren’t the largest you will find.

However, it’s not their weight that impedes their abilities to fly but, instead, their feathers. The curling makes it impossible for them to get any air!

Sebastopol geese are typically white, but the colors can vary. The feathers on the breed’s neck tend to be smooth and are sometimes grey-brown instead of white.

There are color crosses that have produced buff, saddleback, and even all gray variants, too.

Breast feathers can be smooth or frizzled.

The blue eye color is most common in the classic white Sebastopol, though some other variants produce birds with unusual brown-colored eyes.

As mentioned earlier, these geese are medium-weight breeds, with ganders weighing up to 14 lbs (and geese only weighing 12 at most). Both the shanks and legs are orange.

Something else that’s worth noting about this goose breed is that the feathers are remarkable in their texture (the crinkled appearance!) as well as the size.

They tend to be much longer than the average goose feathers. Because of this, the Sebastopol goose looks like it has many more features than it actually does.

A fleshy, compact bird looks larger at first glance than it really is because of these feathers.

It has a short back and a plump, oval basket. Its thighs are short and well-muscled with equally short, stout shanks.

Only one Sebastopol color is recognized – white. However, many breeders are working on getting different colored varieties recognized. 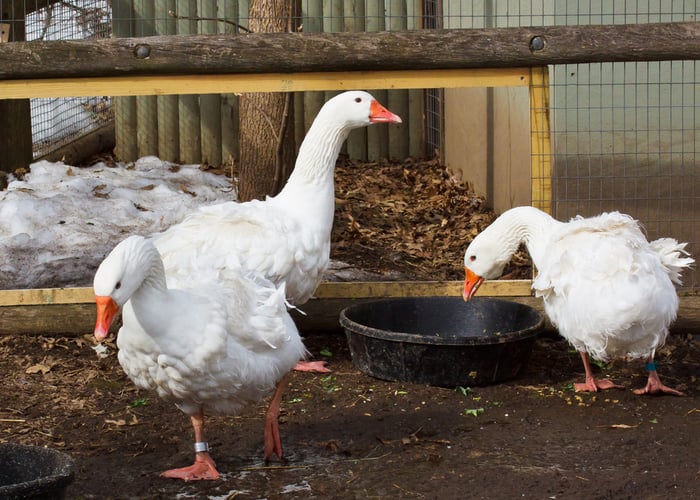 Sebastopol geese are known for being friendly and quiet. They are perfect pets for families who are concerned about aggression issues when raising geese.

These birds are rarely hostile, instead of more on the shy side.

They aren’t as vocal as other breeds but can still be used as alarm animals since they’ll honk when anything unusual is amiss!

That said, they won’t broadcast nearly as far and wide as other geese breeds.

They are approachable, easy to keep – and stirring to look at! Sebastopol’s also make wonderful parents, even when used as adoptive parents for other goslings.

They are prone to broody but occasionally suffer from fertility issues related to their feathering – something we will address in greater detail below.

While all geese forage to some extent, Sebastopol’s are some of the best at doing so.

They’ll enjoy weeding around your garden, and since they aren’t super heavy breeds, they shouldn’t compact your soil too much.

Sebastopol geese are sometimes raised for eggs, but if you decide to do this, know that you won’t be getting as many eggs out of your Sebastopols as you might get from your backyard chickens.

The average female lays only 25 to 35 eggs per year.

Of course, these are quite large. Bright white in color, they are big enough to make up for three or four chicken eggs!

Sebastopol geese can be raised as reliable layers during the laying season between early spring and summer.

Although Sebastopol eggs are somewhat smaller than those of other goose breeds, they’re noticeably larger than those from chickens or ducks.

Most commonly chosen for exhibition or as pets, they can also raise Sebastopol geese for meat.

They aren’t typically used commercially for this purpose, but if you decide to raise Sebastopols for meat, you should be able to process them at around six to ten weeks.

This will help you avoid pulling pin feathers from the carcass since you will slaughter the geese before they molt their juvenile feathers and grow adult plumage.

Another benefit of raising Sebastopol geese for meat is that you won’t have to worry about an odd carcass side due to the lighter feather color of these birds.

It’s purely a matter of aesthetics but can make for a cleaner-looking carcass by the time you’re ready to put it in the oven. 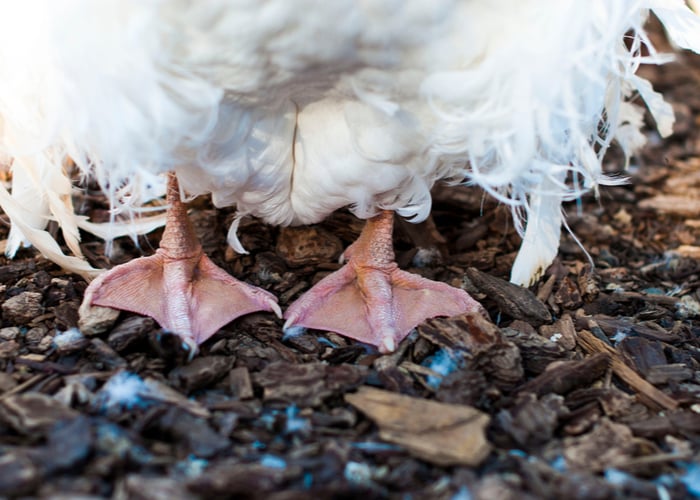 Sebastopol geese can live for two to three decades when cared for properly, with the average lifespan being around 25 years.

Because of this, it’s important only to raise Sebastopols if you’re up to the challenge. This is a lifelong commitment we’re talking about!

Sebastopol is regal and intelligent.

You can choose to keep them around as a pet for a long time.  But many people choose to slaughter them early in their lifespan when being raised for meat. 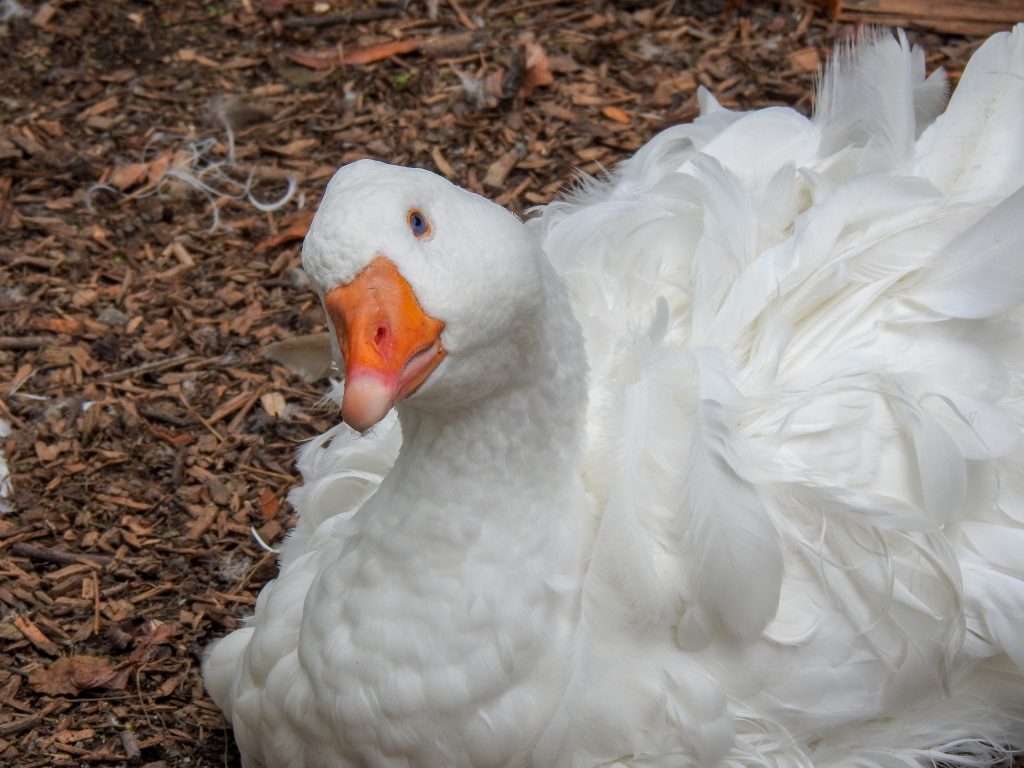 Reasons to Love The Sebastopol Goose

There are lots of reasons to consider raising Sebastopol geese. For one, they’re wonderful to look at.

These geese are quiet and friendly. Plus, they’re hardy and perform well in colder climates, which is certainly not true of all breeds of geese.

Not only that, but the uniquely curled feathers of these geese make it difficult for them to fly. While that might be a drawback to some, for most people, it’s a benefit.

Impeded flight means less work trying to keep your geese confined – and fewer issues with them getting onto your neighbors’ lawns to nibble the grass, too! 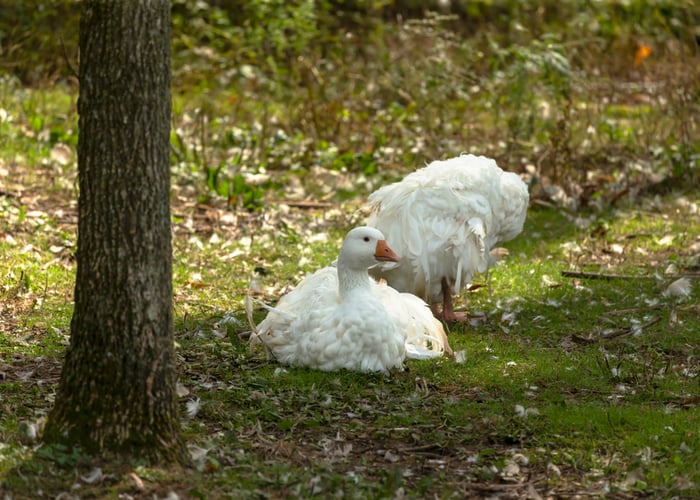 What to Keep in Mind When Considering a Sebastopol Goose

If you’re interested in large-scale meat or egg production, then the Sebastopol goose is probably not the right choice for you.

These animals aren’t the most prolific in their egg and meat production.

However, they make excellent pets or show animals. There are a few conditions to keep in mind here, though.

If you are raising Sebastopols for the show, you will need to take a few additional steps to make sure your animals remain in tiptop shape.

To preserve the health and appearance of their long, curled feathers, keep your birds in clean, dry pens. This can help you avoid broken or dirty feathers.

Some people give their birds unlimited access to bathing water.

While this can help the white plumage stay rinsed free of debris, some people don’t recommend this because the feathers of these geese don’t shed water like normal feathers.

This can cause the feathers to look unhealthy and ragged.

Instead, please put them in an enclosure that contains tall grass. This will help them brush themselves clean.

Just offer buckets of water in which your animals can submerge their heads. By doing this, the body feathers will remain dry while you can still maintain certain standards of cleanliness.

It’s also important to limit overcrowding with these animals.

Not only can overcrowding impact the appearance of these feathers, but it can also reduce the likelihood of other health problems.

You may want to provide additional protection in cold, wet, and windy periods.

While Sebastopol geese are relatively cold hardy, their unique features can be a bit loose-fitting and won’t provide quite as much warmth as the feathers on other goose breeds.

You can mate one gender with one to four geese when breeding your Sebastopol geese.

If you happen to notice that fertility is poor, clip the feathers on the tail and back and those around the vent. 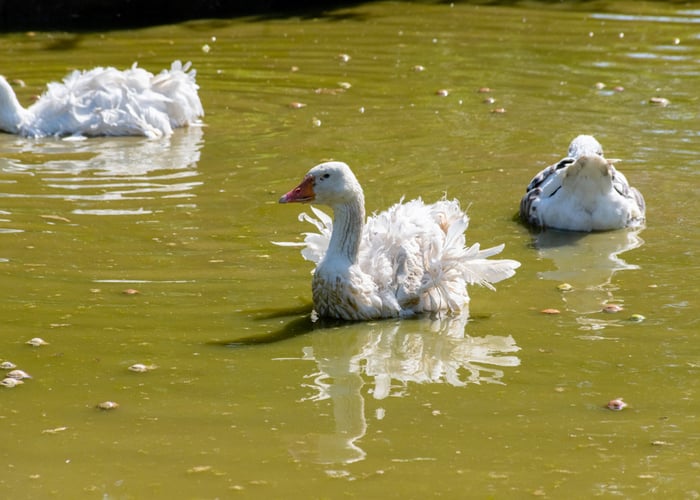 What to Look For When Purchasing Sebastopol Goose

Buying Sebastopol geese is not unlike shopping around for any other kinds of geese.

Look for animals that do not have long, rectangular bodies. For example, find a goose with a rounded body when viewed from the side and from above.

It would help if you also avoided smooth breasts.

You’ll also want to pay close attention to the feathering. Feathers on the breast should always be curled.

Primary and secondary wing feathers should not be stiff – instead, they should be soft, long, and pliable so that they will curl easily.

Avoid birds with large amounts of gray if you plan on using these animals for exhibition.

A trace of gray in young birds is okay and will usually go away after the birds have molted for the first time. However, in adults, You should avoid any color besides white.

If you plan on keeping these animals for meat production, know that you will receive a well-flushed, medium-sized carcass. Again, keep one male with two or three females for the best results. 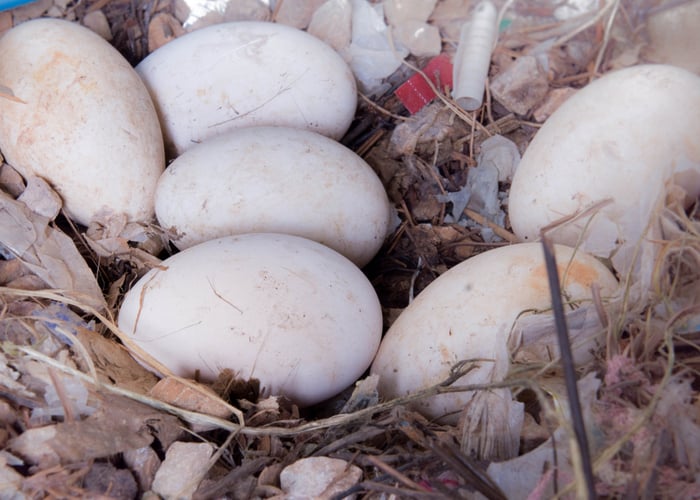 Is the Sebastopol Goose Right For Me?

If you’ve been considering raising a Sebastopol goose but are not entirely sure if this unique breed is right for your family or farm, we hope our blog has provided some insight.

We recommend doing plenty of research on the breed and consulting with experts before deciding whether to get one yourself!

Consider these questions when deciding whether to raise a Sebastopol Goose to make an informed decision:

1) What kind of climate do I live in?

2) Do I have enough room for my new pet?

3) Is raising geese legal where I live?

4) Will my neighbors approve?

5) How much time can I spend caring for them each day/weekend?

After considering these factors and the traits of the Sebastopol goose listed above, you should have all the information you need to make an educated decision. Enjoy! 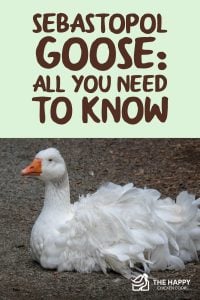 One thought on “Sebastopol Goose: All You Need to Know”