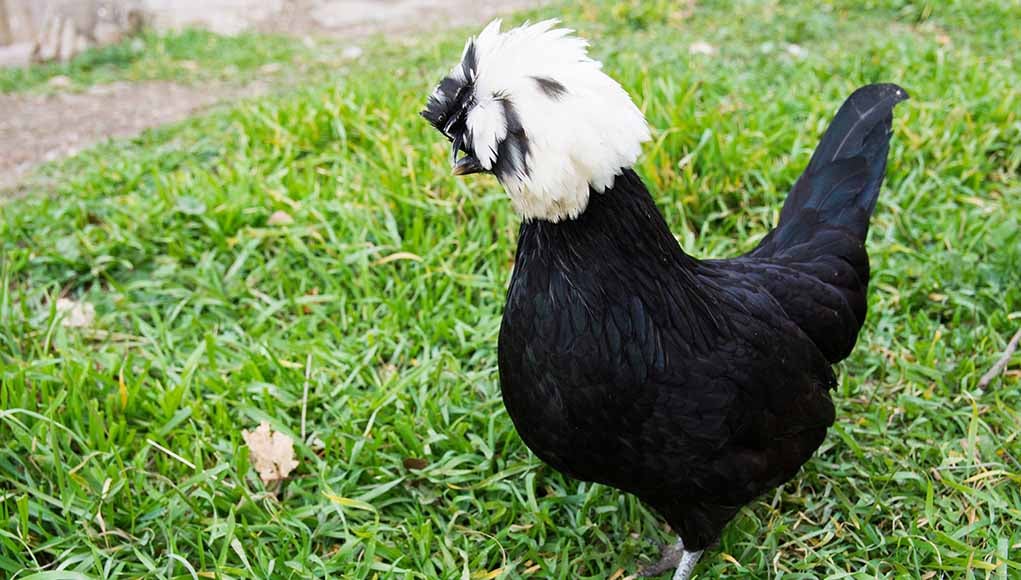 Ornamental chicken breeds are a variety that is not known for their egg or meat production but has value in their unique appearance or other characteristics.

Many actually lay well, but the size and number of eggs are less than what your standard commercially viable chickens accomplish.

There are quite a few ornamental breeds available and they can all potentially make a fun addition to your flock!

Some have certain qualities that make them more useful than just eye candy, so if you want eggs or meat you still have options.

The Houdan is a French breed of chicken and is thought to be descended from birds that were present in Normandy as far back as 2000 years ago.

These ancient chickens combined with another Norman crested chicken to form the Houdan.

They are very unique in appearance due to their massive crests and beards.

They are also one of the few breeds of chicken that have five toes on each foot – a trait they share with Silkies, Dorkings, Sultans, and Faverolles! Houdans typically have a V-shaped comb.

These chickens have surprisingly good egg production for a fancy-looking breed! Some even describe their output as “Leghorn-like.”

They also grow well and produce a decent amount of meat, making them an excellent dual-purpose chicken.

The La Flèche chicken is another ornamental French breed with a V-shaped comb. Since they don’t have a crest, this comb is more striking in appearance and resembles horns poking up from their head.

This combined with their solid black feathering makes it easy to see why they’ve been nicknamed the Devil Bird!

They lay large white eggs and were known in France for the quality of their meat.

They haven’t been as popular in the United States as other breeds because they are less hardy, but they can make an interesting conversation starter. 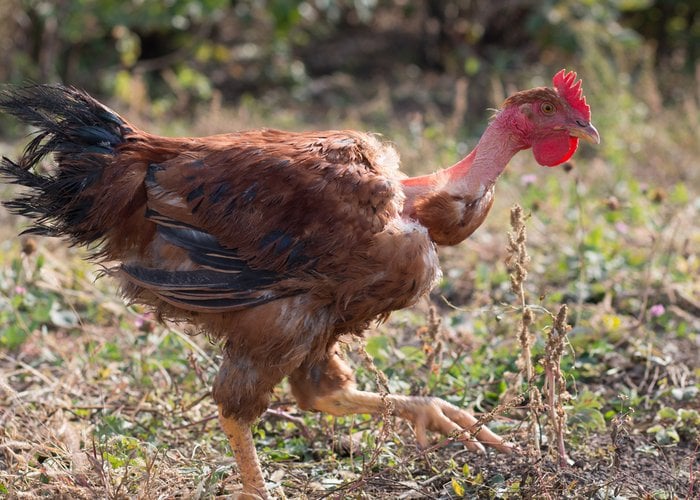 The Naked Neck chicken is a very unusual breed that originated in Transylvania, Romania. They are also called Turkens due to the similarity of their “naked” neck with a turkey.

The genetics for this weird feathering (or lack of feathering) is an incomplete dominant gene, which means it’s super easy to add to any other breed of chicken!

Despite how easy it is to hybridize breeds and make “naked necks,” there is a true breed with a certain set of characteristics.

They are dual-purpose and lay a good number of light brown eggs. They are cold hardy and are great at free-ranging and foraging for food. Naked Neck chickens are also known for being heat-tolerant and super easy to pluck. 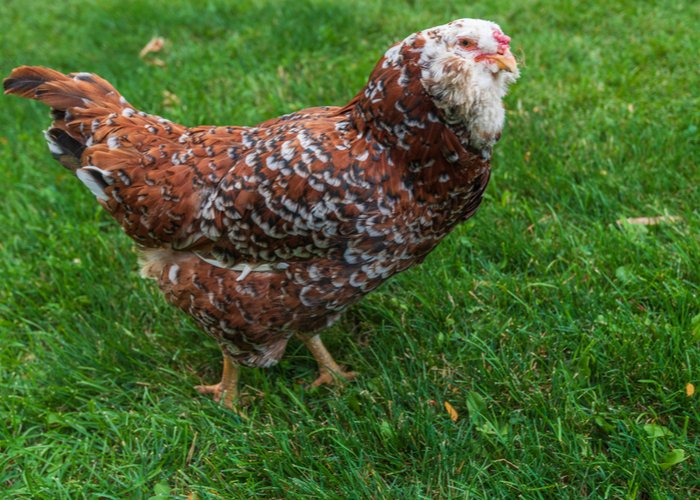 The Russian Orloff is a breed that descends from Persian birds imported to Russia by Count Alexei Grigoryevich Orlov.

There is also speculation of other breeds from various European countries that he may have been used in the creation of the Orloff.

They are characterized by having ample beards and muffs, thickly feathered necks, and tiny wattles with small cushions, walnut, or strawberry combs. This helps make them exceptionally cold-hardy!

They aren’t known for their egg production, but hens do lay a decent number of brown eggs and even do well laying throughout winter. They were mostly bred for meat production and had calm dispositions.

This classic ornamental chicken breed is known for its extravagant crest that pretty much covers its whole head!

These crests are so large they have trouble seeing and maybe startled easily. Their exact origin is unknown and there is some argument as to whether or not they originated in Poland.

Wherever they’re from they’re sure to draw a lot of attention in your coop! They have small, V-shaped combs and small wattles which can almost disappear due to their heavy cresting (and sometimes beard).

They lay a decent number of white eggs, so they make a fun backyard chicken. Some care needs to be taken to protect them from predators since they don’t see as well.

They also need protection from other chickens, because their fun crests might attract some pecking.

The Buttercup or Sicilian Buttercup is known for its cup or crown-shaped comb!

Hens have pretty golden feathers with black spangles and yellow-green legs and feet. Roosters are reddish-orange with a black tail.

They were bred for a long time on the island of Sicily off the coast of Italy.

They lay white eggs, but not very many because more attention has been paid to their appearance than quality. This oversight means they truly are more ornamental than useful.

They have V-shaped combs, like many other crested breeds, and also have five toes on each foot.

They are bred entirely for looks and do not lay very many eggs.

Many serious Sultan fanciers keep the birds carefully housed on dry bedding to protect their feathers, so it’s good they’re calm, friendly, and are content to be confined!

They have ancient origins and are known for being flighty like your typical Mediterranean chicken breed.

The White Faced Black Spanish is tall and solid black with a “beetle green” sheen to their feathers. They have large, single combs and white earlobes.

The white on their earlobes extends over the face and around the eyes which is a stark contrast to the black feathers. They lay a lot of large white eggs but are not as hardy as other breeds. 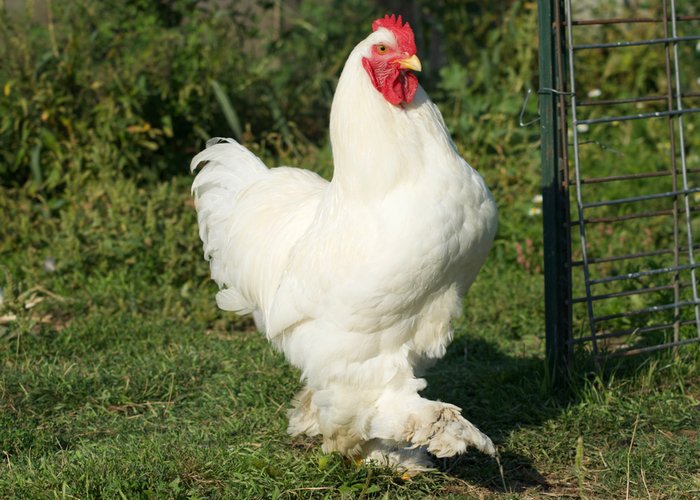 The Cochin chicken has been a popular ornamental breed for a while due to its large size and fluffy appearance.

They were bred in China for their meat and production of large brown eggs – especially since they lay throughout winter!

Their fluffiness helps them withstand frigid temperatures better than other types of chicken, so they’re a great choice if you live somewhere cold.

Other than the profuse feathering, these chickens are known for their wonderful personalities. They’re calm and friendly and are exceptionally good mothers.

Hens will sometimes raise two clutches a year and some roosters have even been caught pitching in! They are useful for hatching the eggs of larger species of poultry, like turkeys, due to their dedication and size. 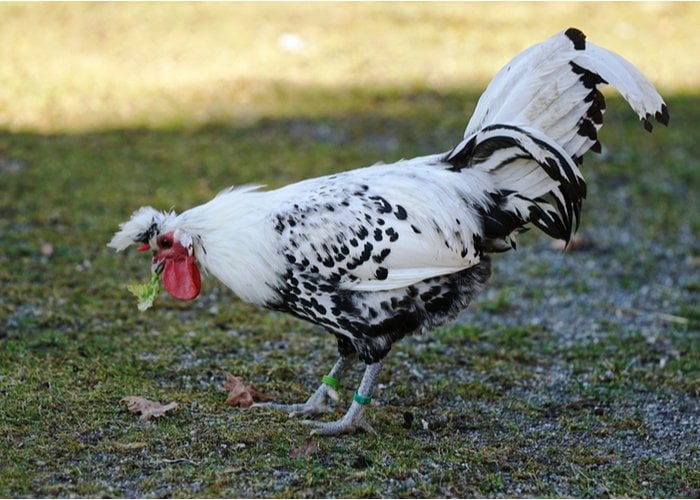 This Swiss chicken breed comes in two varieties – the Spitzhauben and Barthuhner.

If you live in the United States you will likely only run across the Spitzhauben variety, which is characterized by its V-shaped comb and funky crest. The Barthuhner has a rose comb and a beard.

They are a really great example of what makes an ornamental breed! They have a unique and attractive appearance, but they are smallish and don’t lay a large number of eggs. 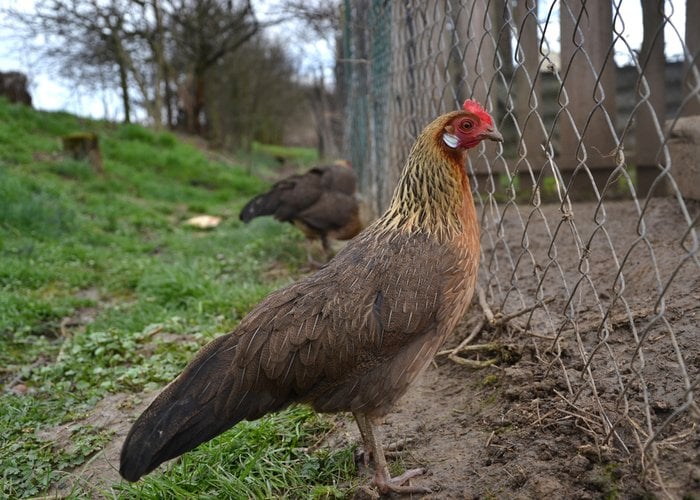 The Phoenix chicken was developed in Germany from Japanese birds crossed with other breeds, including Leghorns and a variety of gamecocks.

Their tails don’t grow quite as long as their Onagadori relatives, but they still reach an impressive 35 inches (90 cm) or more! T

his extra feather growth requires a bit more protein than other chicken breeds and special housing is required to keep those long feathers in good condition. 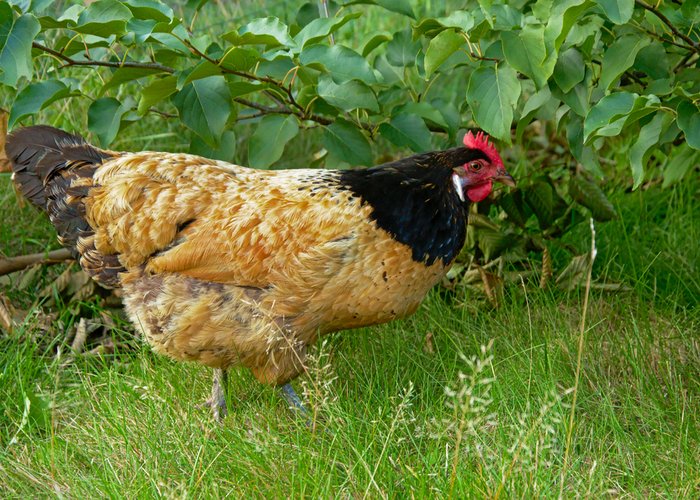 This stunning chicken breed is eye-catching despite its classic chicken silhouette due to its striking coloration. They are white with stark blackheads and tails!

The hens produce a lot of pretty white eggs and generally don’t go broody. They’re also known for their ability to forage and free-range.

They are more of a nervous, flighty bird which helps them to somewhat avoid predators. Adding all of their characteristics together results in a unique breed that could be a decent homestead egg producer. 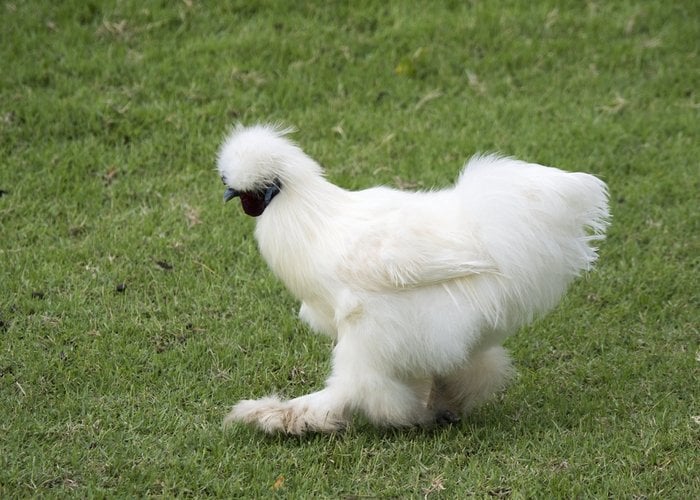 The Silkie is a popular ornamental chicken breed for good reason! They are very unusual in appearance because of their fluffy, soft feathers which almost resemble fur.

Silkies have a puffy crest on top of their heads, feathered legs, and feet, and some even have beards and muffs.

They also have five toes on each foot, small walnut combs, turquoise earlobes, and black skin, meat, and bones.

Their feathering makes it very difficult or impossible for them to fly, so they are easy to confine with a fence.

The one thing that really drives Silkies to be an asset to people is their mothering instinct! They are known for going broody and for being dedicated mothers!

Silkie hens can be great if you want to hatch other breeds of chicken without having to use an incubator.

The Ayam Cemani is still somewhat uncommon in the United States but has become increasingly easy to find over the last few years.

They are definitely an example of a truly cool chicken breed because their meat coloration is unappetizing, hens don’t lay many eggs, and they aren’t likely to even attempt to hatch any. People are drawn to them entirely based on their appearance!

This Indonesian breed is known for being fibromelanistic, which means they have a dominant gene that causes excessive black pigmentation.

Pretty much everything is black – feathers, skin, beaks, tongue, and even their bones, meat, and organs! The only thing NOT black is their eggs, which are a rather normal creamish-white.

A mulberry or reddish pigmentation in their comb or wattles is considered a flaw and it is increasingly difficult to find well-bred Ayam Cemanis due to their jump in popularity.

This HUGE breed is known for its size and you may have even run across videos of what appears to be an unusually massive, fluffy rooster squeezing out of a coop.

That rooster was a Brahma! They normally reach around 12 pounds while the hens average nearly 10 pounds.

Other than their size, they’re known for being decent egg layers, particularly over winter. They’re quite hardy but need to be kept dry because of their feathered legs and feet.

They have also been an important meat breed for a long time and could still be an asset to anyone with a homestead that also wants to feed their family.

Whether you just want to add something fun to your coop or you want to start a whole flock, you get to decide which you would enjoy the most!

You might be drawn to the Ayam Cemani’s solid black appearance, the Silkie’s furry feathers, or even the Phoenix’s long tail.

You may choose to raise some Cochins to hatch your turkey eggs, or maybe opt for the Houdan so you can have a funky egg layer.

Whatever you chose you’ll definitely get some questions from friends and neighbors! 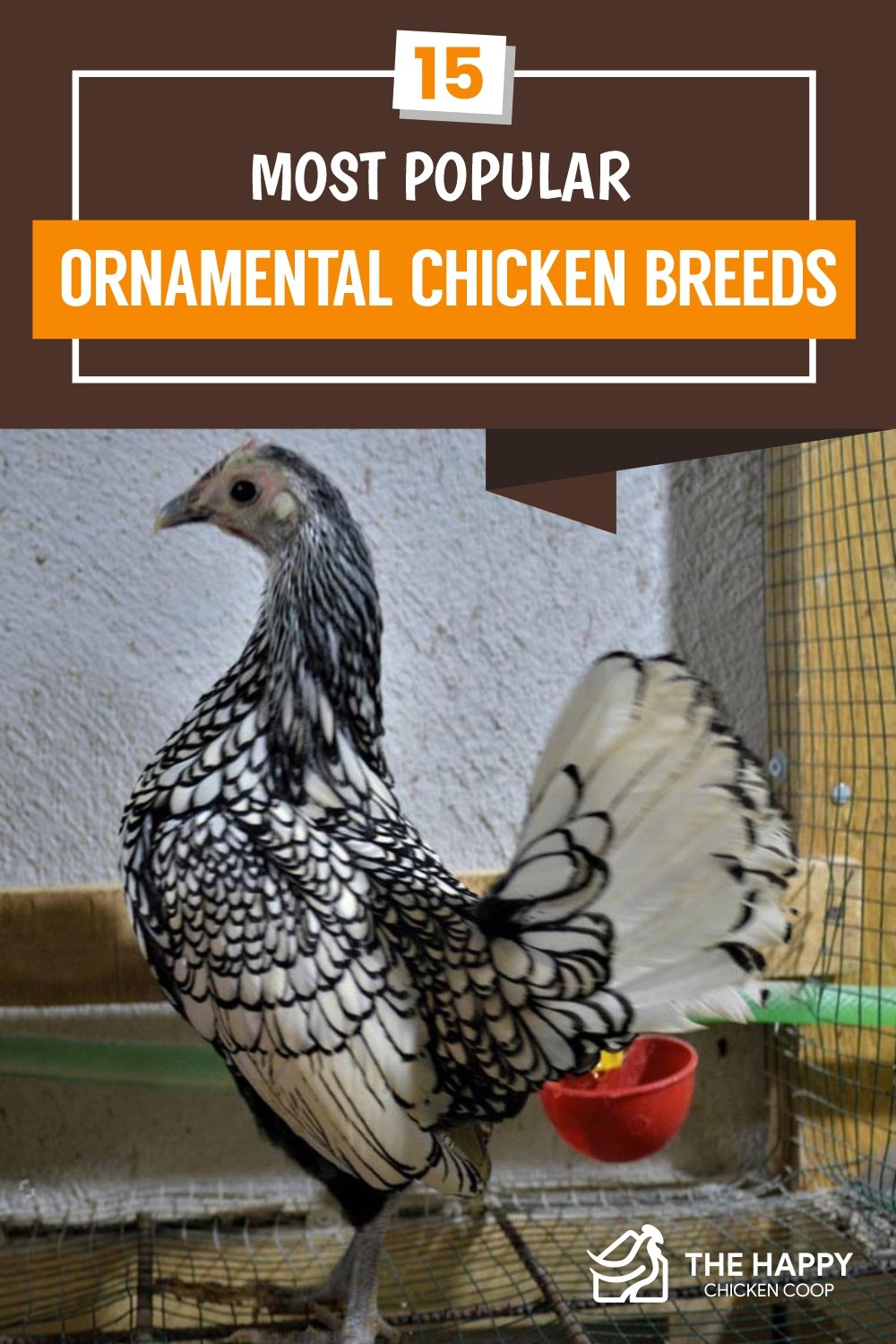