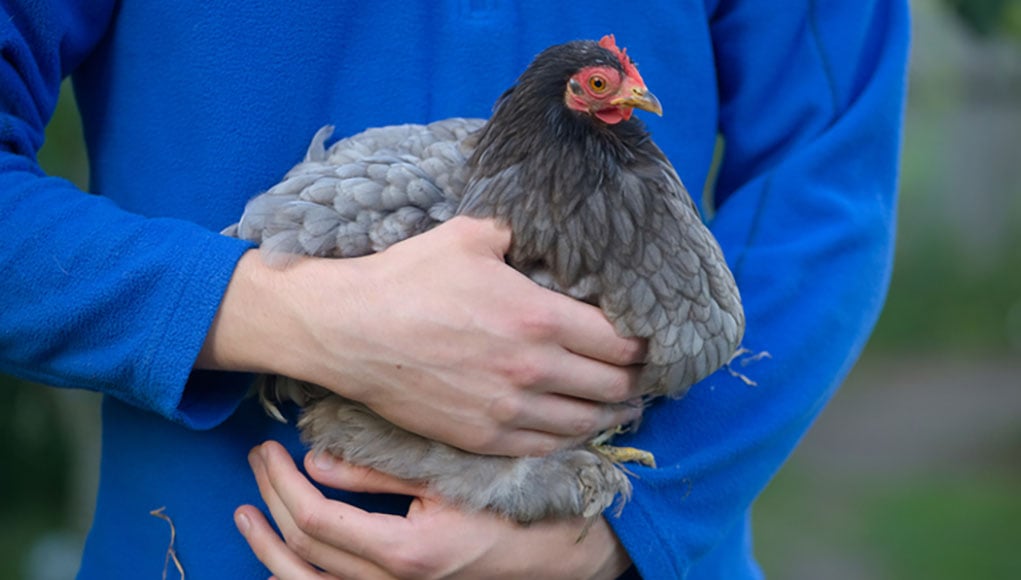 There are quite a few breeds out there that look grey, so if you’re looking for one of these beautiful birds you have quite a few options to pick from!

Most have feathers that are composed of various shades ranging from almost black to pale silver and others are more uniform or even extravagantly patterned.

Each feature helps makes up one of the grey chicken breeds.

Chickens have complex genetics when it comes to feather coloration and there are many different ways to make one that appears grey.

However, not all of these breed true, so their chicks could end up in a variety of different colors.

What Makes a Chicken Grey?

Grey feathering comes about a few different ways and is usually based on a black-colored bird.

Most often if you see a grey chicken breed it will technically be blue or lavender, but some are blue laced, blue mottled, or splash.

There are even color combinations that can look rather grey, like the fawn silver duckwing!

Birchen is sometimes called grey in Japan, which can further complicate things for you, and some breeds have grey in the name or variety name.

One of the most common types of grey chicken breeds is called blue. Blue chickens are defined by their fairly uniform grey coloration and are not supposed to have other colors “leaking” through.

Many of these blue chickens might have a darker shade around the edges of their feathers and quite a few have noticeably dark heads and necks.

Blue is controlled by an incomplete dominant gene acting on a black chicken. One copy gives you a solid grey appearance while two give you a white or pale grey bird with black or blue splashes of color.

This second (the homozygous blue) is called splash. This means that when you breed two blue chickens together half of the chicks will be blue while the rest will be either black or splash.

Lavender, also called self blue, is another way to make grey and it also requires a black-based bird. It is a recessive gene, so the chicken needs two copies to appear grey.

Since the birds have to be homozygous to express the color dilution you will always get lavender chicks from two lavender parents!

Good-looking lavender chickens can be difficult to breed because this gene is known to cause brittle feathers. 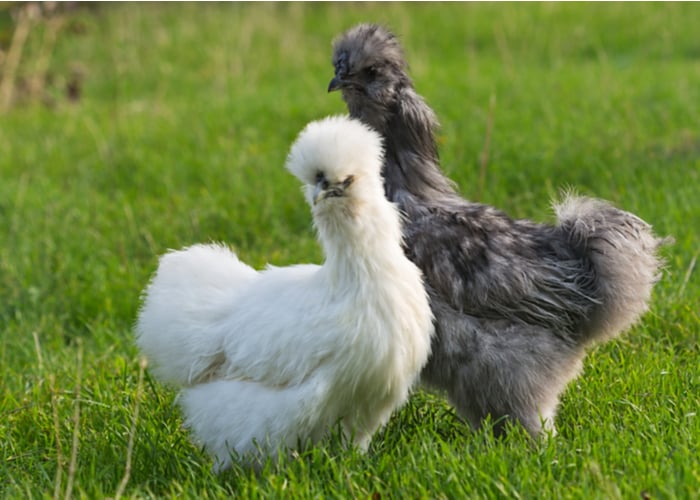 Many, many grey chicken breeds out there have varieties that are grey.

Breeders sometimes work carefully to introduce new colors into a breed through selective breeding, so this list will grow over time.

New colors are usually not recognized by breed organizations or poultry clubs for a while. Often this doesn’t happen until enough people start breeding and showing the “new” variety, so you may find a grey bird in an unexpected place!

Both the bantam and large fowl can be found in blue and self-blue among many other colors. Lavender is still harder to find in this breed but has become quite popular.

These grey chicken breeds are characterized by their blue coloration, but some are black and some are a splash.

These grey chicken breeds have a wide variety of colors, but only the bantams are recognized to come in blue.

The Australorp, grey chicken breed started off only as black, but more recently blue has been developed!

Cochins come in a wide variety of colors, so there’s no surprise you can find blue in both bantam and large fowl and self blue in the bantams.

These grey chicken breeds are usually known for their signature color “salmon”, but they can sometimes come in blue salmon and blue as well!

Frizzles come in a wide variety of colors since they’re bred for a unique appearance, so there’s no shock you can find them in blue and lavender.

Hamburgs are a small heritage breed that you normally see spangled or penciled, but on rare occasions, you may see blue!

These grey chicken breeds are classic chicken that is usually thought of as white but has quite a few color varieties. Blue and lavender are both rare color variations and are recognized by some poultry clubs.

Minorca chickens are usually black but have other color variations like buff and white. The blue Minorca is recognized in the UK.

This grey chicken breed can be found in blue but be careful that you don’t accidentally look at one of the breeds that naked necks have been added to!

Orpington’s are easy to find in blue and lavender due to their friendliness and a well-deserved popularity.

Plymouth Rock can come in blue, but many are actually a cross between a blue Andalusian cock and a Plymouth Barred Rock hen and go by the name Blue Sapphire. You can find some regular Plymouth Rocks in blue, but those can be hard to find!

Sapphire Gems are a hybrid variety of grey chicken breeds that are known for the blue coloration and for great egg production.

Silkies are also known for their wide range of colors. Blue is a common color, but there is also a color called grey that has its own unique genetics.

These grey chicken breeds are usually only black, but there are some blue ones out there! The first group was developed by the late Dave Scrivener from the UK, so you may struggle to find blue Spanish now!

This is a blue egg layer that has blue individuals if you want a gorgeous grey bird that gives you a fun egg color.

Wyandotte’s have many colors, so there’s no surprise they come in blue and lavender! Many of their other colors appear grayish as the silver penciled, violet/lilac laced, blue laced silver, and blue barred! 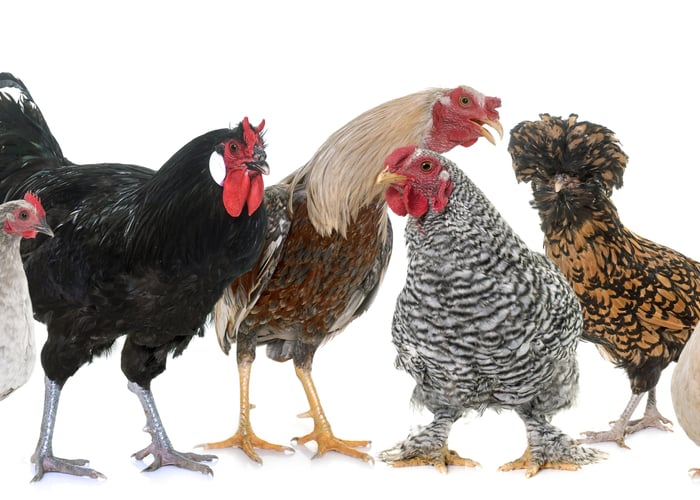 Often times you will find more color variety in bantam breeds, like what we mentioned with the Ameraucana! 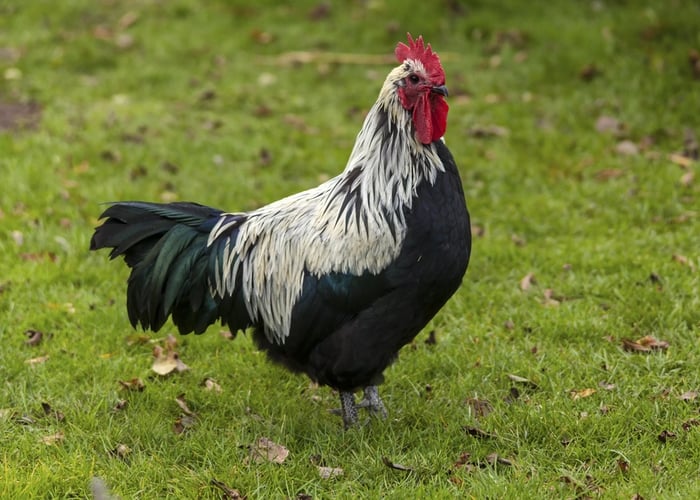 Grey in Name Only

You may run across breeds of chicken that have grey in the name or even have a variety called grey, but these breeds are generally not actually grey at all!

Many barred birds get lumped into the grey umbrella because their mix of black and white can appear somewhat grey.

The California Grey is a dual-purpose chicken breed from California that was created by crossing Barred Plymouth Rocks and White Leghorns. They are actually barred and not grey in color!

Norfolk Grey is another dual-purpose breed, but they were developed in England. Again, they are not grey in coloration but are mostly black with silver hackles.

The Scots Grey from Scotland is a dual-purpose breed that has barred feathers.

To make things even more complex, the Dorking breed comes in a color called Silver Gray, which is a combination of light silver and black!

As you can see, grey chicken breeds are a pretty difficult color to figure out when it comes to chickens! There are a lot of different genes or gene combinations that result in a bird that appears grey.

Your best bet, if you want a flock of grey-colored birds, is to pick a popular breed and look for a blue variety. If you want something a little more complicated, but more of an elegant grey, you can track down lavender.

Keep in mind that color does not make a chicken and you should focus first and foremost on the type and quality of the bird itself.  Many exhibitions, like grey chicken breeds, lose the characteristics that made them great when breeders stop focusing on the big picture.

Read Next: 17 Best Blue Chicken Breeds for Your Flock 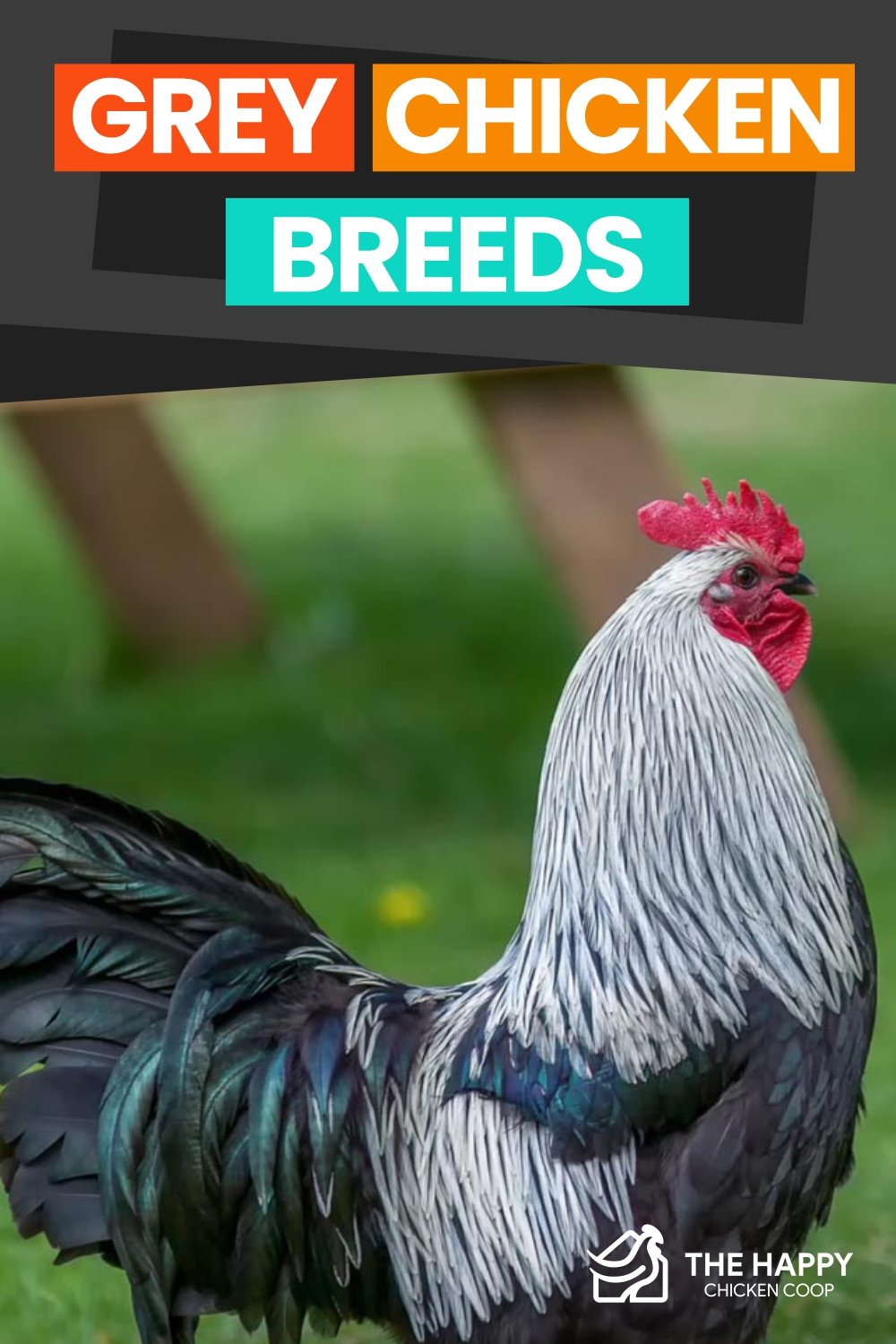 One thought on “Grey Chicken Breeds”