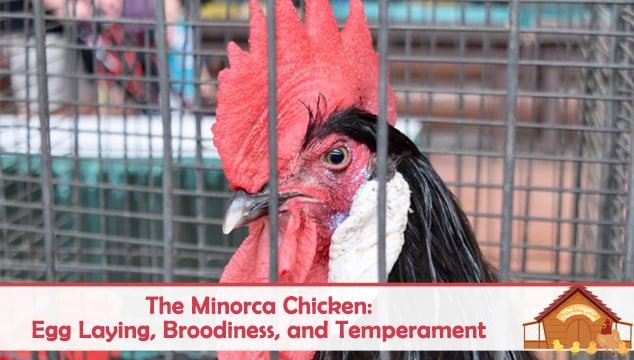 Initially, from Spain, the Minorca chicken made her way to the US and into the hearts of backyard poultry enthusiasts, and with good reason:

Who needs to wait for double-yolks when you have a Minorca?

This beautiful chicken lays some of the largest eggs out of all the standard breeds. So if you are looking for an elegant chicken to give you some great baking eggs, read on! 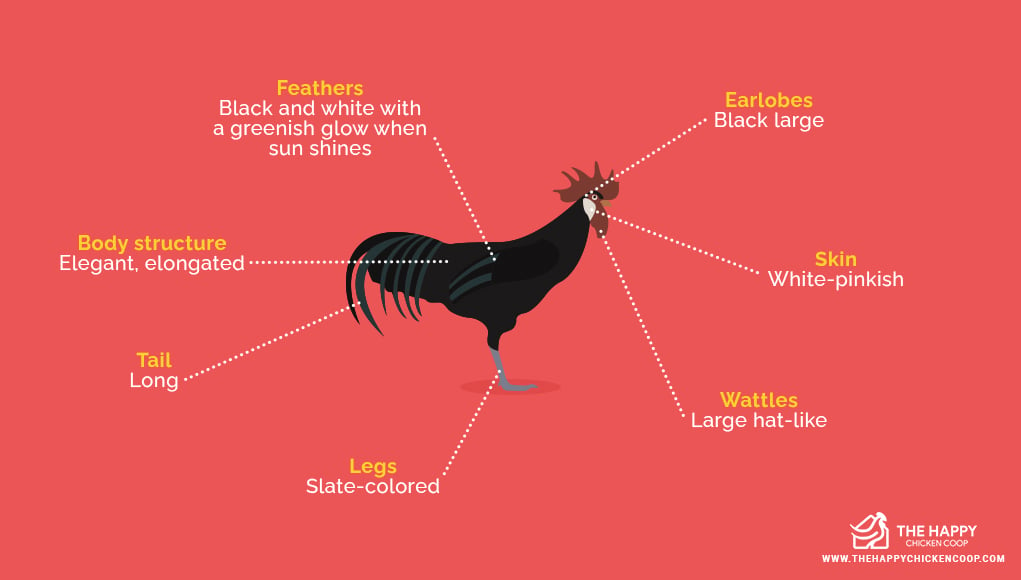 The Minorca has a unique physical trait that evokes plenty of stares and giggles; her earlobes are huge compared to most chicken breeds.

Large combs, wattles, and earlobes make winter-living not-so-easy. The large areas of fleshy skin exposed to the elements in winter make it difficult for the Minorca to avoid frostbite.

With large hat-like wattles that droop down over the Minorca’s face, roosters match their elegant hens perfectly. Like a high-society couple at a roaring 20’s club.

Minorcas come in black and white, but the consensus is that the fave color is the sleek-like black color variety.

Their black feathers have a luminescent look to them, and when the sun hits just right, a greenish glow shimmers across their bodies.

This beauty has an elegant, elongated look with a long tail that seems to shoot straight up and reaches toward the sky.

While Minorcas are considered a medium-to-large variety of chicken, they have a slender appearance due to their feathers…hey, black is very slenderizing.

The Minorca has white-pinkish skin and slate-colored legs. In general, this is a beautiful bird to behold. Even the white variety looks amazing with its large earlobes and wattles.

Black versions have stunningly contrasting white and red on black. Their faces are incredibly bright, giving them a sunny and kind expression.

Minorcas are considered to be one of the larger Mediterranean breeds of chickens. They mature at around 8 lbs, which makes them a decent size for meat.

So, even though their slender-looking bodies make the Minorca appear small, they actually carry an impressive amount of muscle.

So, it can be important to know how to feed them to keep them at their normal healthy weight.

Here’s the most significant selling point for the magnificent Minorca; these beauties lay big eggs.

Their eggs are one of the largest in the collection basket, and they are classic white in color.

Minorcas were once considered prolific egg-layers; however, their egg production rates slowed as breeders began emphasizing their appearance.

Breeders wanted to focus on skin color, and of course, those Alfalfa-like earlobes.

Instead of keeping up with layers like the Rhode Island Red, the Minorca may lay a mere 120 eggs per year.

But, what she lacks in egg volume, the Minorca makes up for in egg size.

Since the Minorca prefers warmer climates, she doesn’t really keep up with better winter egg-layers.

So, if this is one of your girls in the chicken coop, who isn’t carrying her weight, cut her some slack because the snow isn’t her thing.

So, if you want to raise more of these elegant birds, it’s time to get that egg incubator you’ve been eyeing at the co-op. Oh well, right? 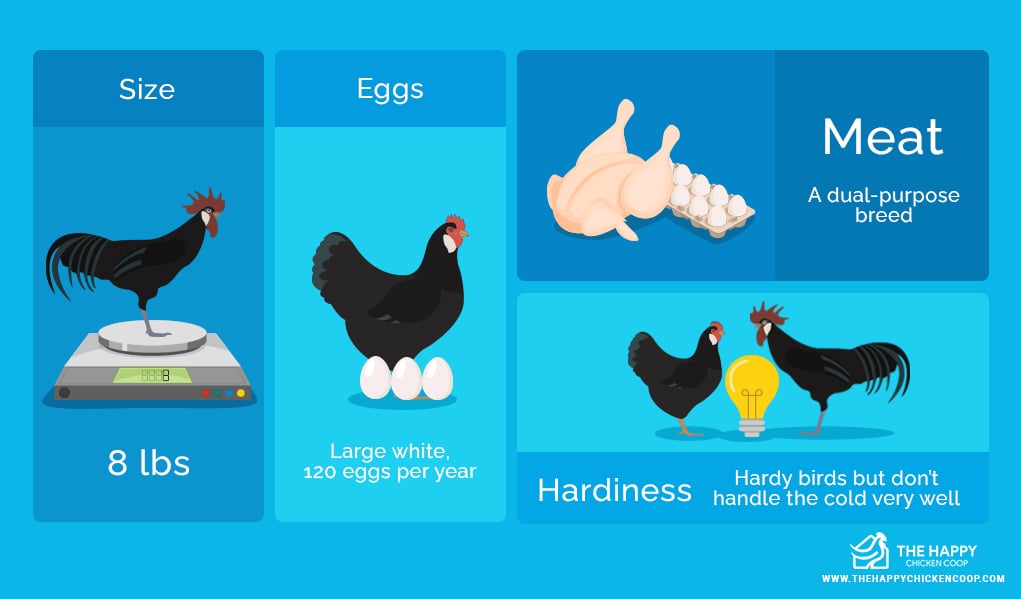 The Minorca has been considered a dual-purpose breed for a long time. When processed, the Minorca has a high meat-to-bone ratio, which is great news for meat-raisers.

However, Minorca meat is a tad dry, so it’s not the juiciest chicken you’ve ever tasted.

According to The Livestock Conservancy, “Historically Minorca chicken breasts were stuffed with lard, that is, “larded,” before roasting.”

So if raising your own chicken meat is your thing, take some tips from those who’ve come before us and add some extra fat to your bird…and baste baste baste.

Since the Minorca is generally considered a warm weather-loving bird, they do very well in the heat, not so much in cold climates.

Minorcas can be kept in cooler climates, but protecting their large combs, wattles, and earlobes from frostbite is crucial.

Ensuring that your Minorca’s have appropriate shelter during the winter will go a long way in protecting their fleshy features from frostbite.

If you get sub-zero temperatures during the winter, simply smearing some gooey Vaseline on your Minorca’s exposed skin can help protect them.

Some swear by heat lamps during cold winters, and this may be an option for you, but be careful because lamps are risky fire hazards.

Heating coops may cause your Minorcas to become unable to tolerate temperature changes, and this may cause more harm than good for your elegant birds.

Aside from the fact that Minorcas don’t handle the cold very well, they are actually quite hardy birds. They are quick and alert in the yard, which makes them excellent free-rangers.

If you’ve owned Minorcas and allow them to free-range, they will most likely be the first out of the coop in the morning and the last to return at dusk.

The Minorca loves to forage for its food and will prefer to find its protein on its own rather than in the crumble you give them.

However, never assume that they don’t need to have their feed supplemented because you never know when there is a shortage of proteins in the field. 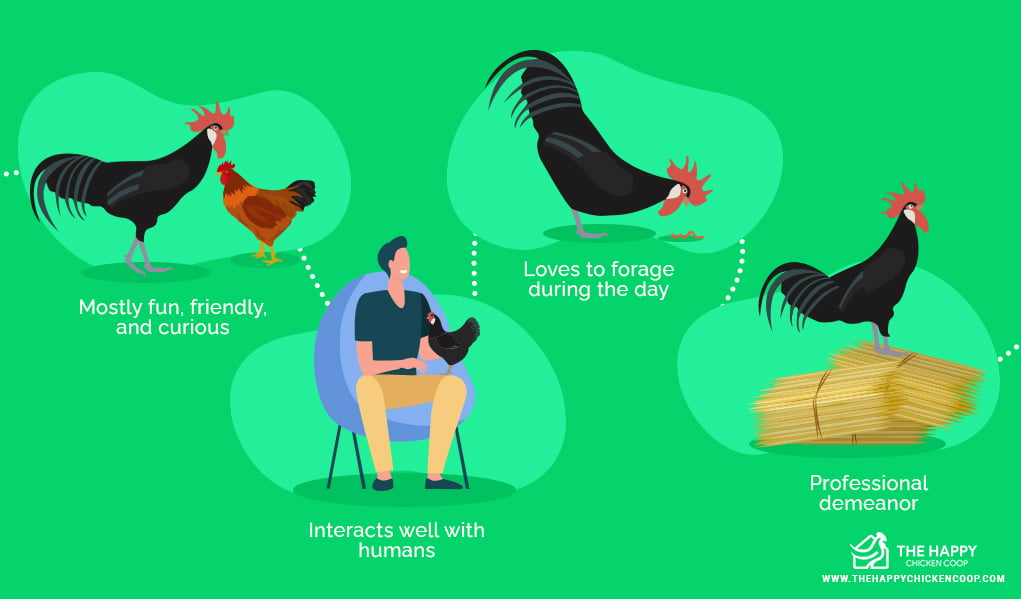 Minorca owners agree that this chicken is one of the most fun, friendly, and curious birds amongst their flocks. While they are alert, they aren’t irritable like some antsy, flighty birds.

The Minorca appreciates her people and has no problem spending time near them when the opportunity arises.

They are docile birds with a professional demeanor. They get to work foraging during the day but are comfortable networking with the humans in their lives.

The Minorca is a beautiful bird that adds to backyard flocks and large white eggs that can stand up to double-yolkers any day.

So, if you’d love an elegant pair of chickens jitterbugging around your backyard, a Minorca roo and his hen may be just the ticket.

If you add them to an existing flock, it is important to go through the introduction process to ensure a happy, healthy coop! 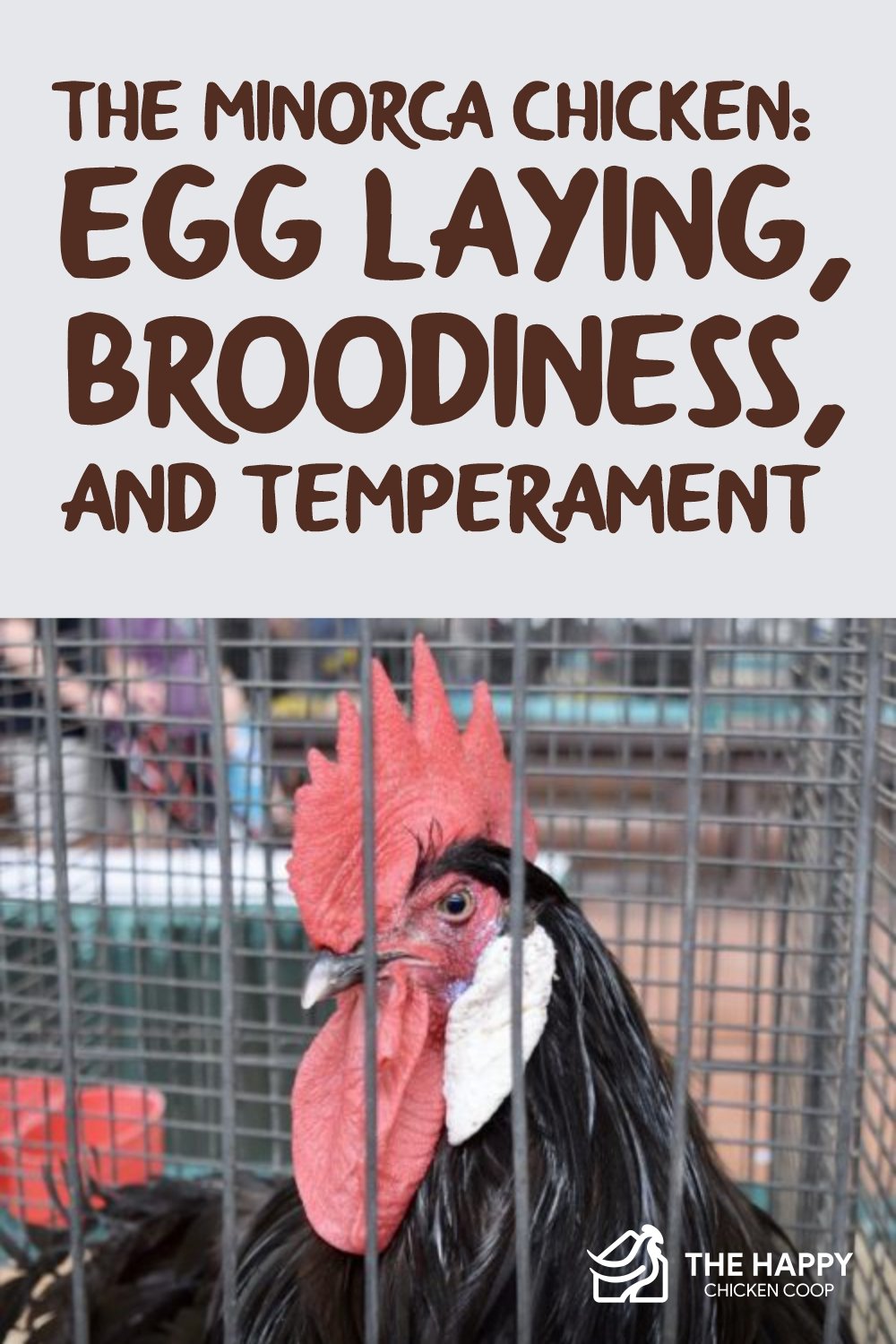 3 thoughts on “The Minorca Chicken: Egg Laying, Broodiness, and Temperament”