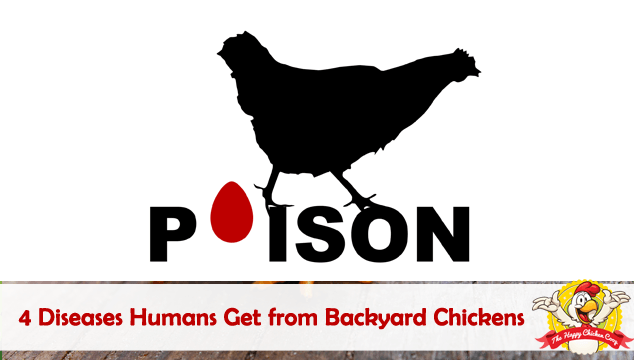 In our busy lives we have come to depend a lot on the food industry to supply us with tasty, quick meals. The down side of this is the occasional outbreak of food related illnesses.
Sadly, we have become almost ‘used’ to hearing about outbreaks of salmonella, listeria, E.coli etc.
They have until recently been linked with the large industrial type factories or processing plants.
Last year in the US, there were several smaller outbreaks of salmonella among some backyard chicken keepers.
Whether the salmonella was from contaminated meat or eggs we don’t know, but I thought this would be a good time to remind everyone that you can get sick from your chickens if you aren’t careful.
The word zoonotic means that the bug/disease can be passed from one species to another. The ones we are going to touch on here are the more common diseases associated with chickens: Salmonella, Listeria, Campylobacter and E.coli.
Each of these four is generally associated with tainted meat, eggs or other dairy products such as raw milk. We are going to look at some of the ways contamination can happen and what you can do to prevent it in backyard chickens.

Salmonella in Backyard Chickens: Cause and Treatment

Perhaps the number one cause of illness and death in the young, elderly and immune-suppressed populations. The CDC estimates that over 1.2 million people were sick from salmonella last year and 450 died.
We generally learn of the problem when there is a recall of chicken, or other meat products and eggs.
The most likely cause of a large illness outbreak is from contaminated meat from the processing plant by equipment that is improperly cleaned, personnel not following strict hygiene rules etc. or the hatchery that supplied the birds.
Many folks have taken up keeping chickens because of the inhumane treatment of animals or the all too frequent outbreaks of contaminated food. While your chances of getting salmonella are low, it makes sense to maintain your own supply of eggs and meat.
However, it should be realized that chickens can carry salmonella, so you must be careful about how you handle your own flock.
Chickens can be carriers of salmonella and show no signs of illness at all because the bird is well nourished and able to keep the bacteria from multiplying. Salmonella can be passed from chicken to chicken by horizontal (bird to bird) or vertical (hen to egg) means.
Salmonella sits in the intestine of the chicken feeding on all the nutrients it gets from the digestion of food.
Once it is passed as a bird ‘dropping’ it can remain active for a long time.
It can be picked up by another bird that may be pecking at the droppings and can easily spread through the flock in this manner.
A hen who is a salmonella carrier can pass it on to her unborn chicks. It can cause around a five percent mortality in new chicks.
Signs of a sick chicken are pretty universal – they will look depressed, ruffled feathers, diarrhea, eyes closed, hunched up and have decreased appetite.
As you can see, these signs fit numerous chicken ailments, so if you suspect salmonella take a fecal sample to your local veterinarian; they will be able to test for worms and salmonella.
It is treatable with antibiotics.
There is actually a vaccine that can be given to chickens, but unfortunately it’s not available to small flock keepers at this time.

Thankfully listeria outbreaks are much less common than salmonella since about twenty percent of humans that get the severe form go on to die from it. The reason it is included here is because the number of reported cases are on the rise.
Listeria is less a disease of poultry – more of cattle, goats and sheep, but they can become infected by pecking at soil, decaying vegetation or water that has been contaminated.
Listeria can be found in animals and birds’ gut, where it can reside causing no problems.
Much like the signs and symptoms of salmonella, the hen will be lethargic and look unwell. The severe form of listeria attacks the brain causing wry neck, leg ‘paddling’, partial or full paralysis and unsteady walking – not to be confused with Mareks.
Hens with the severe form usually die.
It can be treated with antibiotics if found early enough in the disease process, outbreaks of listeria in poultry are very infrequent.
You should be aware that most cases of listeria come from meat or dairy products, but the really bad thing is that it can survive and thrive during refrigeration!

Campylobacter (jejuni) can inhabit a broad range of livestock including chickens. It is usually non-pathogenic (does not cause illness) in chickens, so they are rarely treated with antibiotics. It can be problematic with ‘house birds’ such as parrots and finches.
Chickens can ‘pick-up’ the bug from insects, rodents, cross contamination from another species (cow, sheep etc.) or a contaminated environment.
Infections tend to be more prolific in summer months.
An article in the Guardian, stated that campylobacter in poultry accounted for a whopping eighty percent of all campylobacter illness in humans!
In the US, campylobacter is responsible for greater than fifty percent of all cases of enteritis investigated.
Contamination can occur during processing, in large scale industrial chicken houses, inadequate cooking of food, raw milk and contaminated hand to mouth contact (children usually).
Illness in chickens is unusual but can occur. The usual symptoms will be diarrhea, lethargy, weakness, keeping to itself and looking unwell.
In humans’ profound diarrhea, abdominal cramps, nausea, vomiting and fever are all part of the disease. Victims often need rehydration and hospitalization, especially the young and elderly.

E. coli is probably the best known of all ‘food poisoning’ germs. We all have E.coli living in our intestines where it is safe, contained and helping to break down food for us. It is when E.coli turns up elsewhere that it becomes a problem.
Most animals and many birds also have E.coli living in their gut.
E.coli is known as an ‘opportunistic’ infection, meaning that it can attack when the infected bird/mammal/persons’ has been compromised in some way.
In chickens’, probably the most commonly seen manifestation of E.coli is egg yolk peritonitis. When the egg is ‘launched’ into the reproductive system, occasionally it will be deposited in the birds’ abdomen instead of the infundibulum.
It just so happens that egg yolk is a perfect medium for infection.
Chicks that have been hatched from contaminated eggs can develop omphalitis also known as ‘mushy chick’.
The bacteria has entered the egg and set up infection, so when the chick is hatched it already has an overwhelming infection going on and usually succumbs to the infection.
Chickens can be infected with a low pathogenic E. coli which may go undetected for a long time. The usual signs are decreased performance (decreased egg laying), lethargy, diarrhea and generally looking ill.
E. coli is shed in the poop, so infection of other birds can easily occur.
The most usual way humans become infected is by improperly prepared or cooked food.
Hand washing is very important after handling your birds to prevent any possible ingestion by accident.

How to Prevent Zoonotic Diseases with Backyard Chickens

Now that you know you can catch disease from your birds – how do you prevent illness in the first place? Really, there are a few very simple things you can do and we have divided the preventative information into two parts:

So, what can we take away from this? If you follow all the steps outlined for hygiene and cleanliness, it is very unlikely you will get sick from your own flock and you will continue to enjoy the benefits of your hens.
Unfortunately, due to the overuse or the inappropriate use antibiotics in not only animals, birds but humans too, we are seeing variations in bugs like E.coli that are resistant to most antibiotics.
The major culprit remains industrialized farming, processing and sales- there are many steps in the process that can lead to illness, especially if ‘short cuts’ are taken.
If you suspect your flock suffers from any of these infections, a veterinarian can take a swab and send it for analysis. If positive, infections can be treated with antibiotics.
If you see signs that your flock is sick, it is best to stop consuming the products they are producing…at least temporarily.
It’s best to have your birds checked by a veterinarian to pinpoint the exact illness so that it can be treated amongst the entire flock.
More importantly, if you feel sick or experience any symptoms that indicate you have any of the above-mentioned illnesses see your doctor immediately.
We hope this has enlightened you and reassured you that your flock is not going to make you sick as long as you follow sensible precautionary steps. We want you to enjoy your flock and keep both them and yourselves healthy and happy!
Read Best Time of Year to Raise Chicks: Spring or Winter?

15 thoughts on “4 Diseases Humans Get from Backyard Chickens: Zoonotic Diseases”