The ‘egg factory’ situated in the hen is an intricate mechanism that usually functions exceedingly well for the first couple of years before gradually slowing down in the mature hen.

Occasionally there are hiccups in the ‘factory’, and it can produce double yolk eggs and many other egg abnormalities.

First, we will do a quick review of the hens’ reproductive tract to remind ourselves of the anatomy involved and to marvel at how it produces an egg daily – usually without a hitch!

Then we will look at egg-laying anomalies such as double yolks, wind eggs, and no-shell eggs.

It seems simplistic to describe the reproductive tract as a tube, but that is basically what it looks like.

Although born with two ovaries, the right shrivels, leaving only the left ovary to produce eggs over the hen’s lifetime. The ovary is packed full of ‘egg seeds’ (yolks) – more than enough for the hen’s laying period.

The egg grows within the ovary and, when ready, slips down into the first part of the tube called the infundibulum – it looks a bit like a trumpet.

The journey continues down the tube with varying amounts of time spent in special areas that add things like the chalazae (which holds the yolk in place) and, of course, the shell, which is applied in the uterus.

Once the shell is applied, the egg continues the short distance to the cloaca where it first sees the light of day when the hen lays the egg.

All this happens in a period of around twenty-five to twenty-seven hours.

Another yolk will be released from the ovary between thirty to seventy minutes after laying that egg.

‘Hiccups’ can occur at any point in the process, and some hens are more prone to problems than others.

Let’s look at one of the ‘best’ hiccups that can occur: the double yolker!

Around one in one thousand eggs will be a double yolk.

Triple yolks are exceedingly rare, but not unknown! 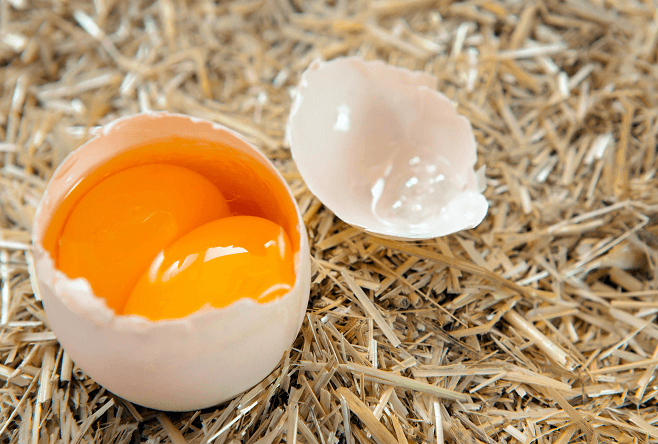 What happens is that a yolk is released and then another is released within a couple of hours.

These two yolks get encased in one shell.

Needless to say, this is a large egg that can cause problems like egg binding.

Fortunately, most hens seem to lay these monster eggs without mishaps.

The issue can be hereditary, but it is most common in production pullets just coming into lay, and occasionally older layers coming to the end of their cycle.

The younger pullets coming into lay suffer from hormone change and imbalance, which can cause the double yolk phenomenon.

Once they have settled into their routine laying pattern, double yolks should disappear and replace regular eggs.

If you were to buy your eggs from the supermarket here in the US, you would never see a double yolk egg – they are considered ‘imperfections’ by the industry.

In the UK, it is possible to find them in the supermarket.

If you were wondering it is possible to hatch out a double yolk egg, the answer is usually not, although it has happened.

If they do hatch, one chick usually succumbs since oxygen inside the shell is limited, and the stronger chick will survive.

There are rare instances of both chicks hatching, but no follow-up information on how they thrive.

Another way to prevent early double yolks from young hens is to “not push the issue.”

Meaning, don’t do anything to rush them into laying eggs, like adding a ceramic egg or overfeeding, thinking you are promoting new egg production.

Let their egg factories mature naturally, and enjoy the eggs when your girls are ready to give them to you.

Lash eggs are not eggs…not wholly, at least.

Lash eggs are egg-shaped puss balls filled with other elements that may include egg particles.

These cheese-like egg-shaped gobs are formed within the reproductive tract of a hen that is ill.

Typically, a severe infection (either viral or bacterial) in the hen’s oviduct causes inflammation (Salpingitis).

If you see a lash egg, you must immediately save your hen.

It’s best to consult a veterinarian so the cause can be diagnosed and treated accordingly.

The infection that’s causing the lash eggs can be treated with antibiotics or surgery, depending upon the cause of the infection and the severity.

Sometimes, you may need to treat your entire flock, especially when the problem is contagious.

Lash eggs are pretty yucky, but keep an eye out for them and act quickly. You may save your entire flock.

Egg within an Egg

Imagine you crack open your egg to reveal…another egg! These are fairly rare events, fortunately.

No one quite knows why this happens – the completed egg suddenly changes direction and reverses back to the uterus, receiving an albumin coating plus another shell.

Occasionally, the reversed egg will bump into the next egg on the ‘conveyor belt,’ and another shell will be laid over both eggs!

Needless to say, the egg will be large, so the hen is not to be envied trying to lay that egg.

Although strange, the egg within is safe to eat.

These are also known as fairy or witch eggs because of their size. 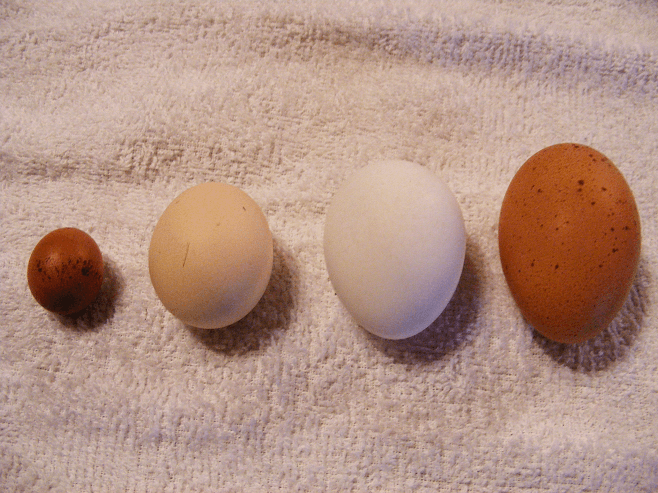 In times gone by they would have been known as rooster eggs which were an evil manifestations.

People believed these eggs were laid by the rooster, and if the egg was allowed to hatch, the creature issuing from it was called a cockatrice.

A cockatrice could turn people to stone if they looked upon it, so the egg had to be thrown over the roof of the house without touching the house to prevent the birth of such a creature!

In actuality a wind egg is usually produced by young pullets coming into lay and having hormonal adjustments. They can have a teeny yolk, but many are yolkless.

Older hens can also lay fart eggs – usually if they have suffered some disturbance in their routine (new flock mates, change of feed etc).

These eggs are harmless and normal service will be resumed as soon as the hen pulls it all together!

Bumpy, irregularly surfaced, or gritty surfaced shells that feel like sandpaper are caused by uneven distribution of calcium across the shell.

There can be a few causes of this harmless appearance, the incidence being higher in hens that lay early in their lives.

These eggs are fine to eat – if you suspect infection in your hens, err on the side of caution and toss them.

Soft Shells and No Shells

The shell in these eggs can be super thin, leading to a parchment look to the shell, or the egg is laid with only the outer membrane and no shell at all! 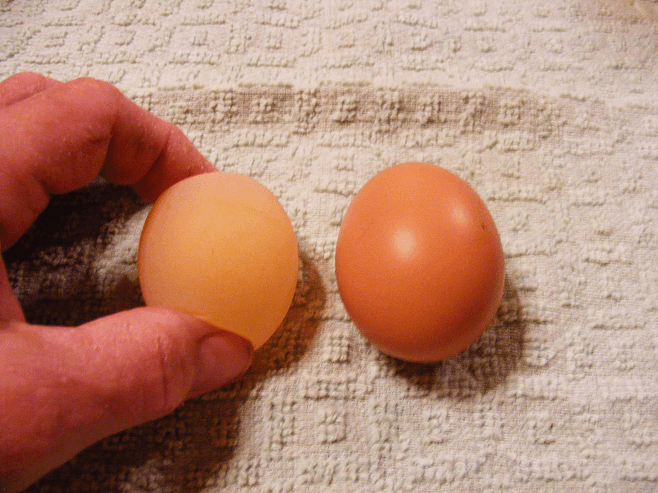 Younger hens can produce them while they are coming into regular lay. It should settle down when her hormones are balanced out.

Older hens, especially good production layers are more prone to soft or shell-less eggs. The cause is not really known.

However, several factors can influence the problem:

Blood spots occur inside the shell. When you crack an egg the yolk can be lightly blood tinged.

This is nothing to panic about.

A small blood vessel around the yolk burst and leaked out a minute amount of blood. This may not be attractive, but the egg is fine to eat. I use them in baking all the time.

It is a particle of the hen’s reproductive tract which has detached and become incorporated in the egg as it passes by.

Again, these are safe to eat as long as it is cooked.

The hen’s reproductive system is in constant motion – from releasing the yolk to building and laying the egg.

The cycle is repeated daily, so occasionally, there is a malfunction.

Although some of the more unusual eggs can be caused by disease, that is usually the exception rather than the norm.

As hens generally live longer than their ancestors, some problems associated with ‘old age and extended laying years are poorly researched.

Traditionally old hens went into the pot as soon as production dropped.

This is still true for ‘industrial’ hens, but our backyard ladies are living well into their dotage now.

If you are concerned about the frequency of odd occurrences in your flock, do a mental checklist to try to eliminate some possible causes.

Was the weather very hot over the last few days?

Were the hens deprived of water because the water froze in the drinker?

Has there been a stressful event for them?

Did I change their food?

How young/old are they?

If you can rule out all of the environmental factors that might contribute to a problem, then it’s time to start looking carefully at the hens.

Is there sneezing or coughing among them?

Does any particular hen look unwell?

Can you pinpoint the one who lays the oddities?

If you can find the hen who lays the problem egg, check her for any signs of illness or disease.

If you are concerned about her health, you can isolate her for a few days and see what happens.

If you suspect something like salpingitis or infectious bronchitis, you should take her to the vet for a check-over.

The vast majority of the oddities we have talked about are not unusual and can occur at any time, especially if your hens are stressed.

The chances of her having a serious problem are small and uncommon, although infection and genetic issues can arise.

So, the next time you get an ‘oddity’, you can use this article to help you understand what’s going on!

Read Egg Bound Chicken: All You Need To Know