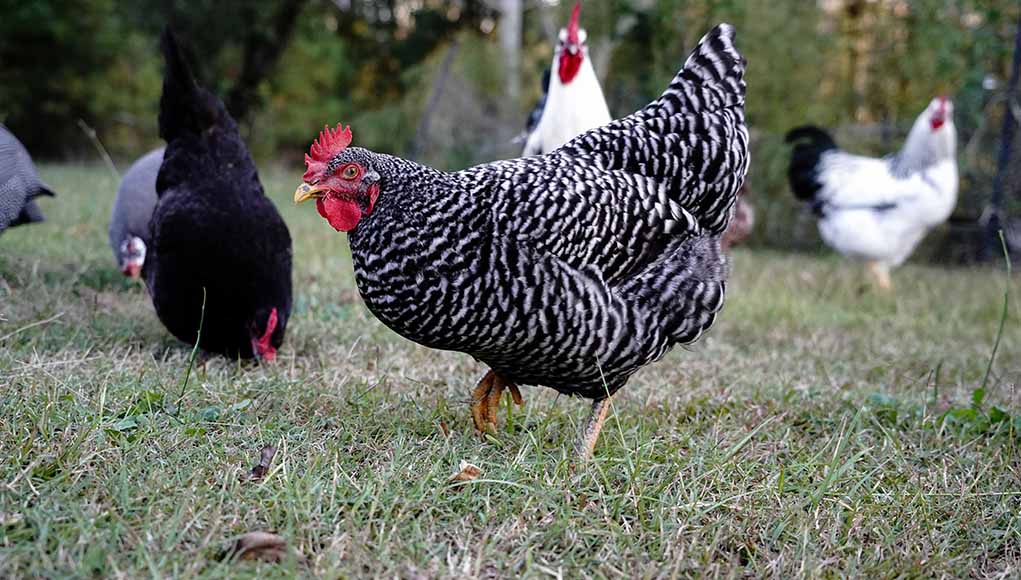 Plymouth Rock is one of Americas’ oldest breeds. The hen was seen from coast to coast before the end of World War 2, and it became the nation’s main source of chicken meat and eggs.

As a dual purpose hen, it excelled in good quality meat production and good egg production, the only hen that could rival it was the Rhode Island Red.

Almost everyone used to keep them; it was encouraged by the Government as the troops needed food to fight across the seas and for the home front.

They were encouraged and embraced by thousands of people during this time, but sadly, after they finished the War, the chicken industry became highly mechanized. Like so many other breeds, the Plymouth Rock was cast aside as not productive enough.

In this article, we will discuss everything you need to know about the Plymouth Rock chicken, including recognized varieties, egg-laying ability, how to care for them, and much more… 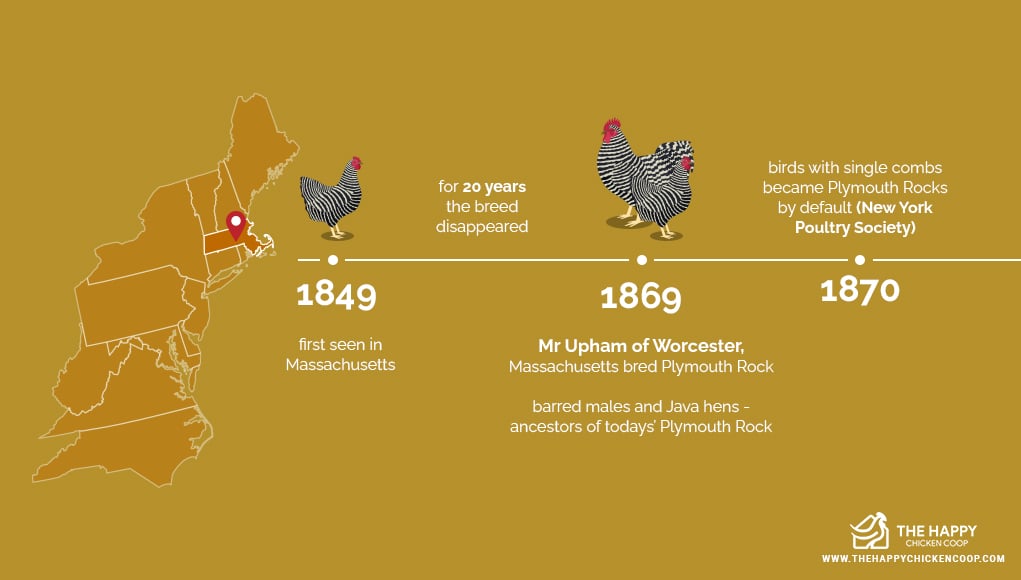 We first saw the Plymouth Rock in Massachusetts in 1849. No one is quite sure what happened to these original birds, as they seem to have disappeared for around 20 years or so.

The trail gets hot again in around 1869 when a Mr. Upham of Worcester, Massachusetts, was breeding with barred males and Java hens.

It’s claimed he was trying to breed selectively for barred plumage and clean legs.

It’s now thought that these birds are the likely ancestors of todays’ Plymouth Rock.

From our Dominique breed article, you may remember some confusion between the rose comb and single comb birds, with both being called Dominiques at the time.

The New York Poultry Society was determined to set the standard for the Dominique as rose combed. After 1870, all other birds with single combs became Plymouth Rocks by default. 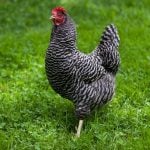 The appearance of Plymouth Rock Chickens

If you asked most folks what a Plymouth Rock hen’s plumage looked like, they would say “black and white bars,” which would be correct as far as it goes.

The barring between the sexes is slightly different. The males have equal black and white barring, with each feather ending in a dark tip.

Whereas females have black bars that are slightly wider than the white bars, this can sometimes give them a slightly darker greyish hue than the boys.

There are several other varieties in the Plymouth Rock family, as we shall see. 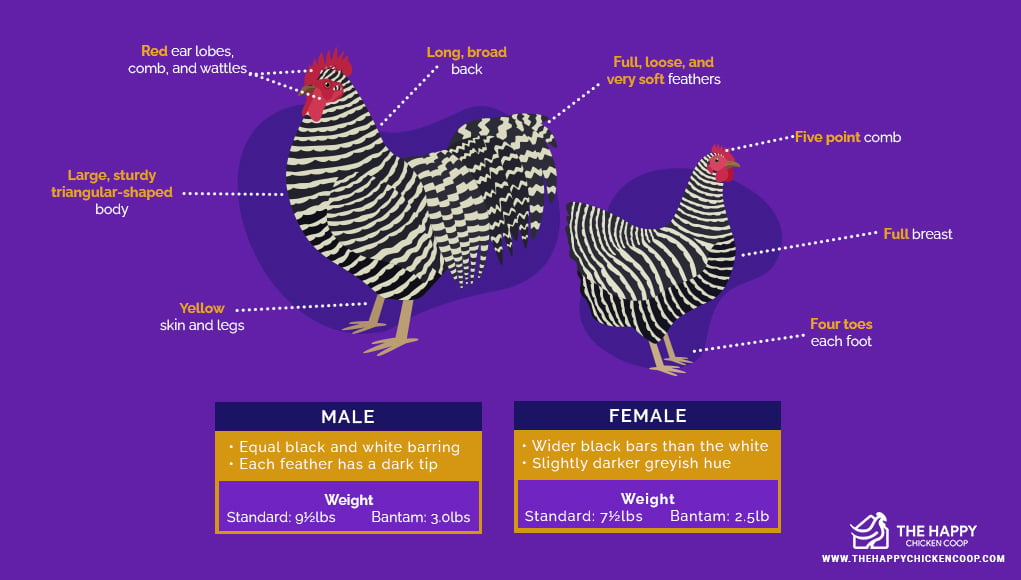 In fact, it is probably iconic in American culture, so in this article, we will describe the barred Plymouth Rock member of the family.

It has a large, sturdy triangular-shaped body with a full breast and a long, broad back.

Feathers are full, loose, and very soft, especially on the abdomen area.

The barring pattern should be sharply defined black and white, unlike the Dominique, which is much ‘fuzzier’ and leans towards grey.

Skin and legs are yellow, and their legs are clean, with four toes to each foot. Their ear lobes, comb, and wattles should all be read as is the face.

The beak is horn colored, and the eyes a reddish bay. Finally, their comb should be single with 5 points.

A standard-sized hen will weigh about 7½lbs, with roosters up to 9½lbs.

There is a bantam variety, and their weights are 2.5lbs for females and 3.0lbs for males.

The Barred Plymouth Rock breed was admitted to the American Poultry Association in 1874. Currently, there are seven accepted varieties. The varieties of the Plymouth Rock recognized in the US are:

All are rare except the barred and the white.

The Poultry Club of Great Britain recognizes only 5 varieties (Barred, Black, Buff, Colombian and White), while the European Association of Poultry recognizes 10 varieties.

The APA classifies the breed as American, while the PCGB classifies it as a soft feather and heavy. 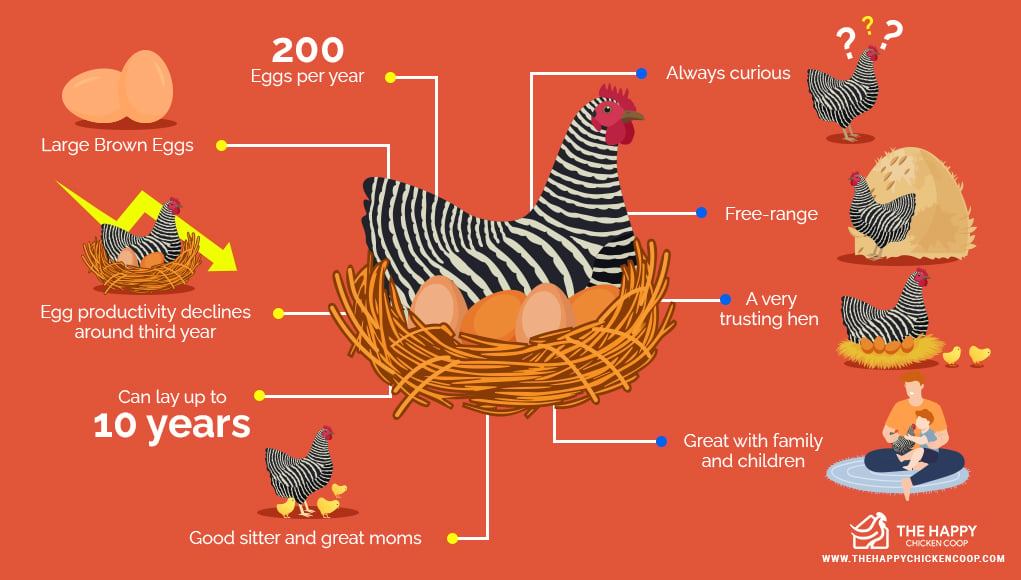 Plymouth Rocks are very respectable layers of large brown eggs. They average around 200 eggs per year which equates to roughly 4 eggs per week.

They lay well for the first couple of years but around year 3, a slow decline in productivity starts. However, hens have been known to lay into their 10th year!

In terms of broodiness, they aren’t known for it, but it can actively be encouraged in this breed, with the hens usually being good sitters and great moms.

The chicks are quick to feather out and mature, and by 8-12 weeks of age, they can be considered broilers if desired.

In terms of their temperament, Barred Rocks are mellow birds. They are not known for bad attitudes or picking at flock mates, and they seem to get along with everyone.

They are described by their owners as sweet, calm, and docile – even the roosters!

Plymouth Rocks are always curious, and they love to check out their environment and follow you around to see what you are up to or any treats to be had.

Rocks much prefer to free-range and find tasty morsels in the yard, but they tolerate confinement well if given enough space.

Once you have established your relationship, this is a very trusting hen and is great with the family and children. 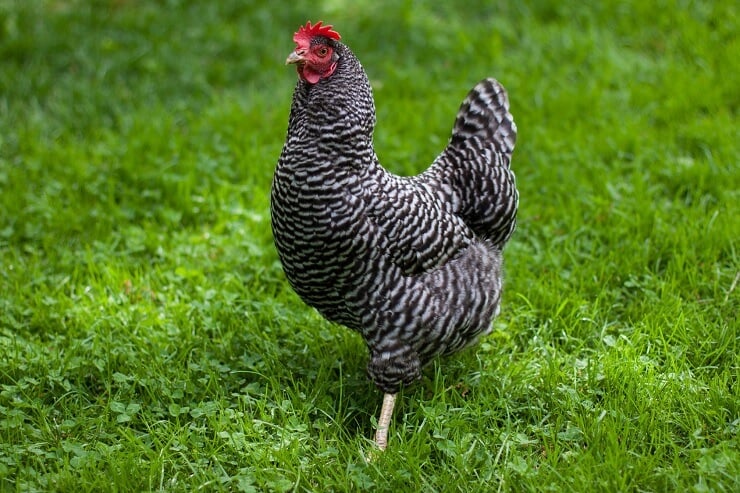 Plymouth Rocks are a healthy, sturdy breed. They aren’t bothered by any particular ailments except the usual array of parasites.

The roosters do have large combs and wattles, so that they may need some attention to those areas in bitterly cold weather.

They have a good genetic pool, so they are usually healthy, long-lived birds that can live for 10-12 years if cared for.

Exceptional birds have lived up to 20 years!

Is The Plymouth Rock Chicken Right For You?

If you are looking for a breed that is suitable for a family setting, this could be your bird. Barred Rocks are known for being friendly towards children and adults. They do enjoy a cuddle and a fuss, and many become lap chickens!

They are poor flyers, so you don’t need to have a huge fence around their enclosure to keep them in, as they are unlikely to go and investigate the neighbors’ yard unless they can walk there.

Speaking of neighbors – the Barred Rock is said to be a quiet but talkative chicken.

Of course, it does have the usual chicken vocabulary, including the egg song, but the Barred Rock tends to ‘whisper’ rather than ‘shout’ across the yard. That should keep the neighbors happier.

They are very easy-going, not difficult to care for, making them a good choice for first-time chicken folks. Plymouth

Rocks are very tolerant of poor management practices, although ideally, they won’t need to be. If treated and cared for well, they can virtually raise themselves!

Their mellow temperament also makes them a good choice for 4H projects and the exhibition arena, where they usually do very well.

The Barred Rock has a long and distinguished history, even though the origins are a bit murky.
After the 2nd World War, the Barred Rock declined in popularity. The breed made the American Livestock Breed Conservancy list. The ALBC  still has it is currently listed as recovering.
The recovery is likely due to a renewed interest in backyard chickens, especially dual-purpose breeds that can fit well into almost any circumstance.
Todays’ Barred Rock hens can be divided into three separate groups:

They fit well into just about any scenario you can think of.
As backyard birds, they do great; they tolerate confinement or free-ranging, do not require any special treatments, and are chatty and friendly. Egg production is very respectable, and as meat birds, they dress out nicely to a good weight. What more could you ask of your chickens?
If you keep Barred Rocks – tell us about them in the comments section below, please… 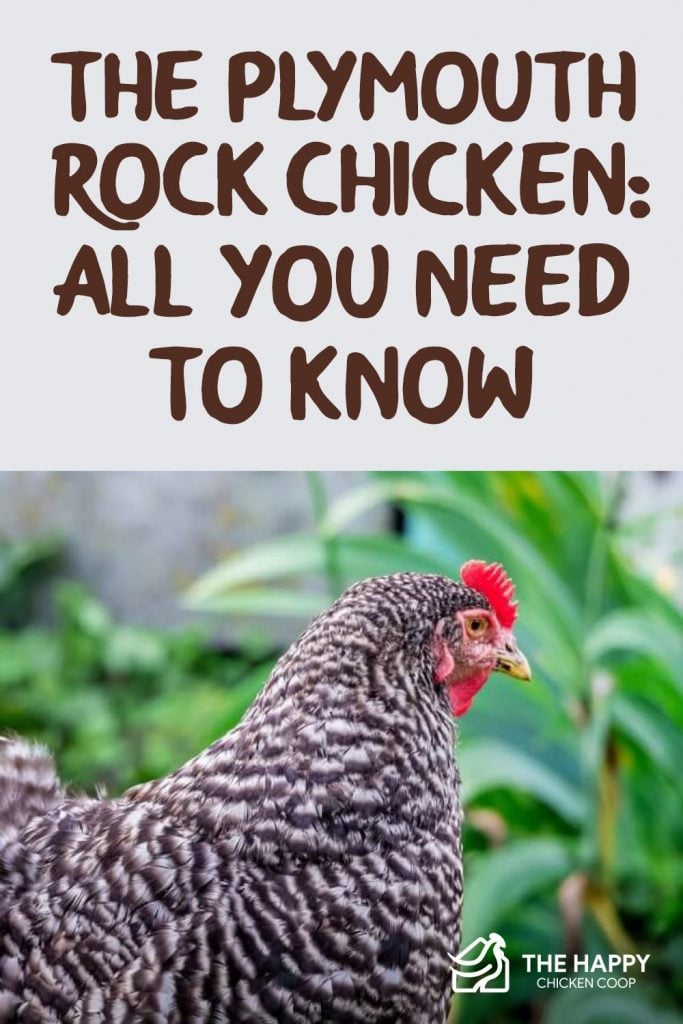 52 thoughts on “The Plymouth Rock Chicken: All You Need To Know”