You are here: Home / Breeds / The Hamburg Chicken Breed Profile – All You Need To Know 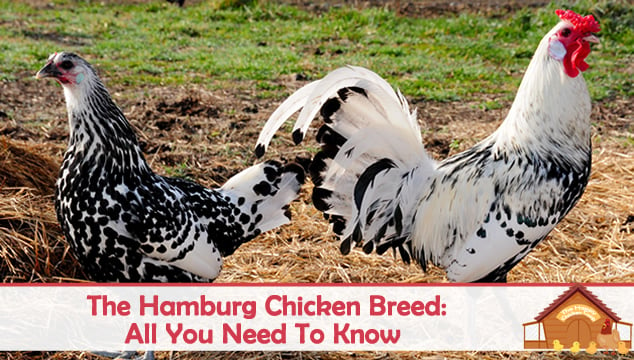 The Hamburg chicken is a plucky little member of the poultry family with origin stories dating back to 14th century Holland. This chicken has some fun stories to chitty-chat about, including its first show appearance in a pub in England during the 19th century. Yup, this little chook competed in its first show in a bar, so the story goes.

Before the Hamburg got its official name, it was called a variety of names that typically had something to do with pheasants, like Pheasant Fowl or just pheasants in general. This is thought to be due to their resemblance of a Pheasant in size, and shape. However, it is also said that the Hamburg derived from turkeys. It is fairly unclear as to where, and how, this lovely chicken was developed.

The Hamburg was developed, and nurtured, to be a production-type of poultry…meaning eggs, and this little gal does not disappoint!

For such a small chicken, she is considered a prolific layer who rarely slows down in production. 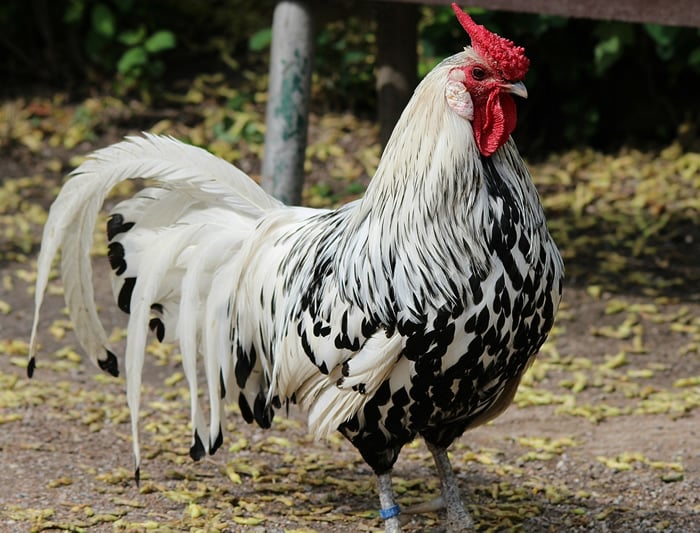 If you like a fancy-looking flock, you will love having any variety of Hamburg. Oh yes, they come in a plethora of colors to choose from: silver-spangled, golden penciled, silver penciled, golden spangled, and occasionally black and white. This teeny breed comes as a fun-size Bantam as well, even though the Hamburg is already a very small breed.

It is no surprise that the Hamburg is credited as being the grandfather of the poultry show. Roosters are jaw-dropping stunning! Chicken fanciers who love keeping ornamental breeds, swoon over the beautiful color and pattern varieties available.

Getting down to the specifics, the Hamburg has a bright red rose comb and grey, clean, legs. This breed’s skin and bones aren’t the typical color of a standard chicken–they are grey.

This perky chicken is a small breed, and not considered a good meat chicken due to their small stature. On average, the standard Hamburg weighs about 5 lbs, making her one of the smaller standard chickens available.

When butchered, the color of the Hamburgs skin and bones can be a turnoff to some because it is not the familiar pearly-white of the Cornish Cross that most commercial poultry productions raise. 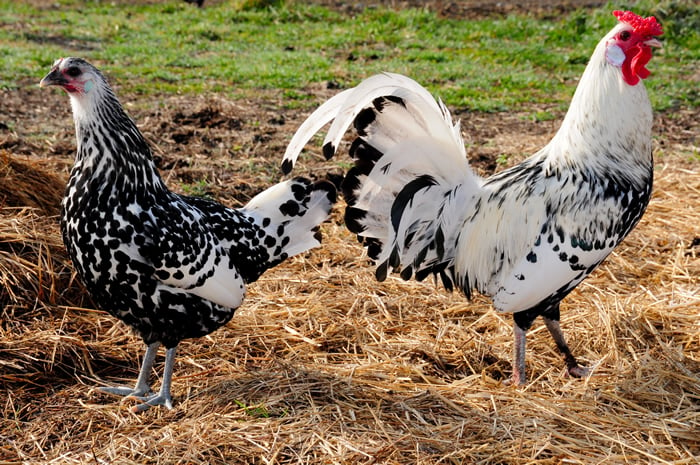 The Hamburg is considered an excellent layer and if you raise them, you can expect to get around three beautiful white eggs from them each week. Remember, the hens are small, so you can also look forward to smaller eggs. However, since the Hamburg matures faster than most chickens, hens begin laying eggs sooner as well. Bonus!

The Hamburg is considered to be fairly cold hardy, but care should be taken in extremely cold climates. When the temperature reaches freezing make sure you have a chicken water warmer ready to go. On the plus side, a rose comb is nearly immune to frostbite because it lays very close to the chicken’s head. This is always a plus for those who get sub-zero temperatures during the winter months.

If you plan on keeping Hamburgs, consider letting them free-range; they don’t care for confinement. If you wanted to see what a chicken looks like, and acts like, in the wild, the Hamburg is one of the closest breeds you can find to entertain your curiosity. They are extreme foragers, and when released every morning, the frenzy begins.

The Hamburg is also very good at taking care of itself. They are alert little birds that can evade and escape predators quite well. So, even as a free-range chicken, this breed may outlast some of your bigger standard-type chickens.

Be aware, this breed has its own frequent flier miles attached to it. Chickens, in general, are not agile fliers, but the Hamburg is almost an exception to this rule. While they cannot take flight, and remain in flight, like a wild duck or goose, they do love to fly! They do the best they can to reach the highest perch, and in fact, they nearly always prefer to roost high in the trees.

If you plan to lock your Hamburgs up at night, don’t fret if you can’t find all of them; they may have decided not to wait for you to tuck them in and took it upon themselves to find a comfortable, safe, roost.

While extremely beautiful, and fun to observe, the Hamburg isn’t a people-chicken. They prefer to spend their time with each other, and of course, foraging for goodies. This makes handling your Hamburgs for medical care quite difficult. They are fast little chickens, that will do everything it takes to stay out of your loving arms. If you must catch your Hamburgs, try approaching them at night while they are roosting.

Hens do not become broody as often as some breeds, like the Orpington, and therefore should not be expected to reproduce on their own. If you keep a rooster with your hens, and you want to expand your flock, you will probably have to invest in a good incubator.

If you want a snuggly chicken, that you can pick up and play with, you can always try to handle a Hamburg as a chick. Just remember, some hearts just can’t be changed. So, you might want to consider a Buff Orpington or Dominique for your next cuddle bug rather than the Hamburg.

Hamburgs are flighty chickens, and some breeders will tell you they are extremely nervous nellies. While nervousness isn’t much fun for chicken owners who like to be close to their chooks, it is one of the reasons the Hamburg evades aerial predators so well. They always have an eye to the sky, and roosters spend a lot of their time flapping about, making themselves appear larger, and more threatening than they actually are.

Hamburgs probably aren’t the best 4-H chicken for the kiddos, but children can still learn a lot about chicken behavior by watching this wild during their morning foraging frenzy.

Despite their leave-me-alone temperament, the Hamburg is a beautiful chicken that ornamental breeders and poultry show enthusiasts go gaga over. Still, don’t count on chicken lovers to bring their prized Hamburgs to the local tavern to show off, though, it might make for a fun afternoon. 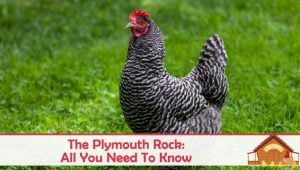